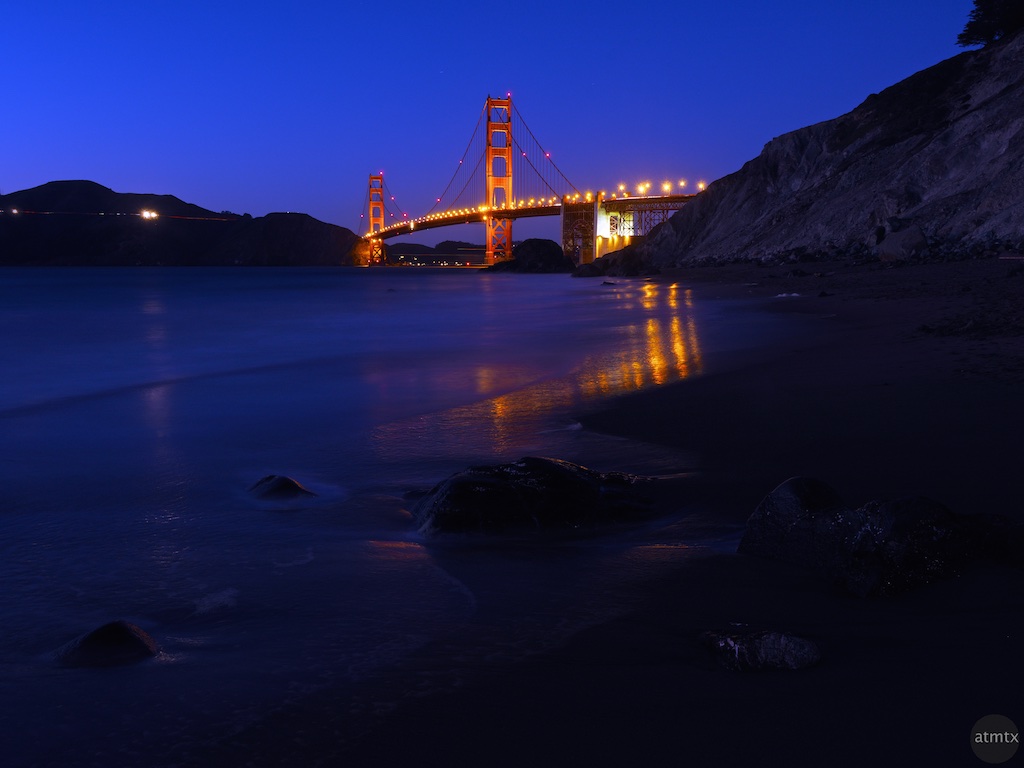 One of the new, standout features of the Olympus OM-D E-M5 Mark II is its high-resolution feature. It uses sub pixel gymnastics to generate 40MP JPEGs or 64MP RAW images. I’ve already talked about it here, with example photos of the high-res mode vs the standard 16MP mode. In this post, I’ll discuss when and where this mode can be most useful.

On a recent trip to San Francisco, I shot some iconic scenes. Landscapes, perhaps you can call them fancy snapshots, from this beautiful city. Simply stated, this high-resolution mode requires stillness. Non-movement. The less movement the better. You need to shoot the camera on a tripod but equally important, your subject needs to have as little movement as possible. But what does this mean? Are there special situations where some movement can be acceptable? Read on and find out.

So much of photography is about freezing action. Not just obvious activities like sports but everyday life is a buzz with movement. That means everyday snapshots and street photography won’t work in this high-res mode. Still lifes and interior architecture may be a natural but how about landscapes? That’s what I wanted to explore in San Francisco.

I headed from the airport directly to Twin Peaks, where I could capture a dramatic city. This, apparently, non-moving view would be a wonderful place to test the camera — the minute details of a dense city, an excellent subject for high-resolution. But as I discovered, the world moves a lot more than I ever imagined.

First, there are the cars. The curvy road leading up to this vantage point had a steady stream of vehicles which I attempted to eliminate. As you drill into the details however, you notice that streets are filled with movement. And while the yellow wildflowers added a nice foreground element, those too become blurry with a slight wind. 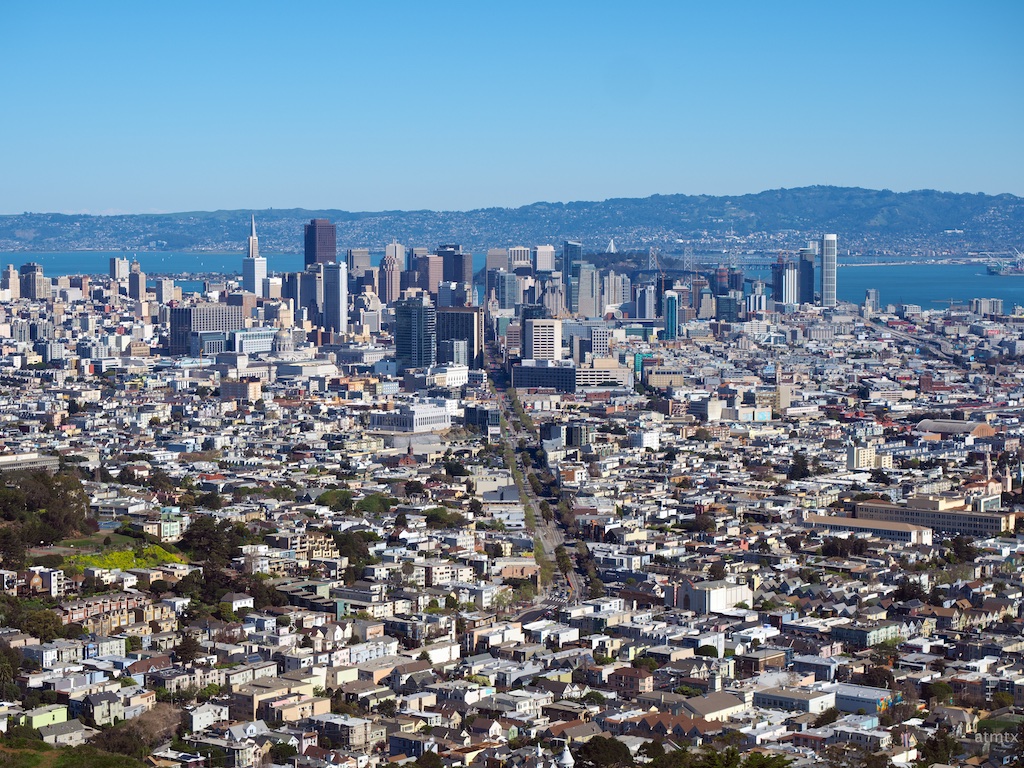 I zoomed to 40mm (80mm equivalent), concentrating on the houses and the skyline, hoping to reduce the sources of the movement. But even here, upon scrutiny, there’s the small things. The ever-present cars, the slight sway of trees and the fluttering of flags.

There in lies the challenge with this feature. By definition, I think, you use high-resolution to to revel in the details. Perhaps you want to print really large or maybe you want to crop in extremely tight. On a regular screen, even at 27 inches, or at standard print sizes, you won’t see a difference — for most subjects the default 16MP mode is more than enough. Go to the effort of shooting at 40MP and you get pickier and that’s where you may detect the tiny blurred movements with the odd mesh like texture. I’ve shown a detailed example of this “mesh effect”. It’s a consequence of the sensor shifting, taking 8 photographs of a moving subject and merging them together.

I headed to Chinatown for lunch and urban landscapes. Unlike my usual city photos, I sought out static subjects, creating, if you will, urban still lifes. Chinatown worked especially well for details, grungy and full of character. 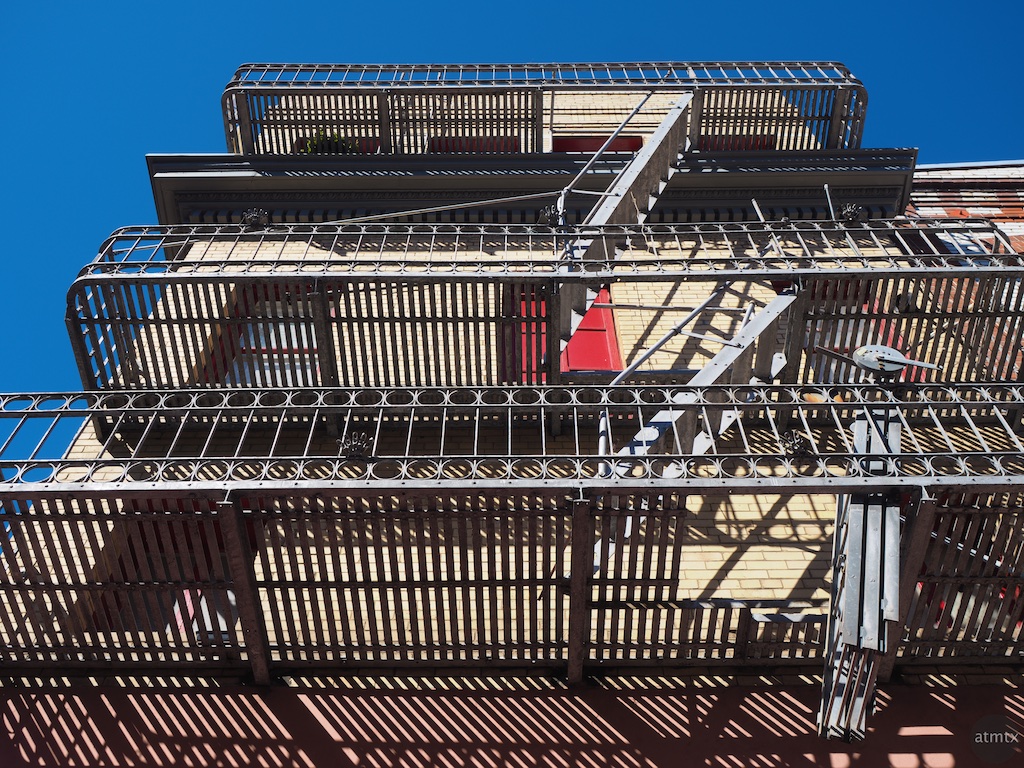 The mid-day sun creates harsh shadows but I used it to good effect, I think. Nothing says “old school tenement” to me than fire escapes. I love the patterns. 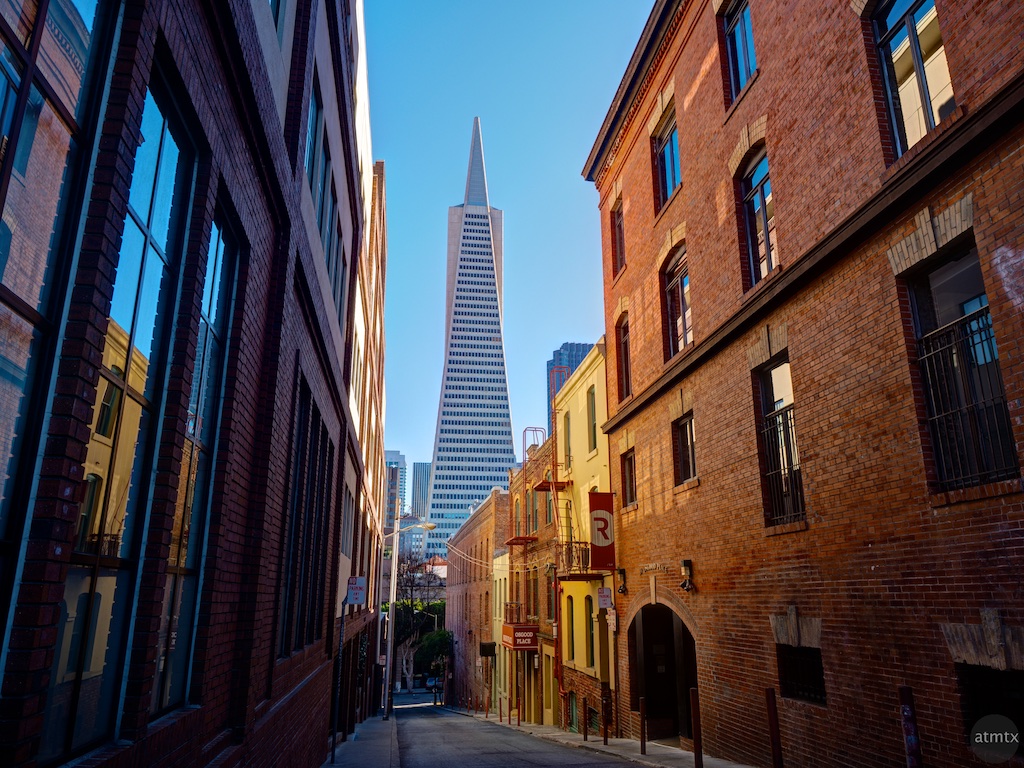 This is my favorite urban composition of that day. I like it aesthetically and it also works well with the strengths of the high-resolution mode. Nothing is in motion so I get no unintended blurring effects. Also, I manually shot three exposures to create this high-resolution HDR. The automatic HDR bracketing does not work when set on the high-resolution setting. I had to shoot and then change the exposure compensation between each frame.

For my last stop that day, I headed to Battery Crosby for a late afternoon to evening shot of the Golden Gate Bridge. Here I discovered another challenge. It was windy up there on the bluff and the tripod vibration adversely affected the high-resolution mode. I do admit that my tripod, while generally adequate, isn’t a super heavy-duty Gitzo. Perhaps a beefy tripod would not have the same issue.

Also, not surprisingly, I lost detail on the ocean with its constantly moving waves. It didn’t just effect the waves breaking on the beach but throughout the entire ocean. In this comparison, the normal photo is on the top and the high-res on the bottom. Click on the photos to view them larger and you’ll see the ocean is sharper in the lower-res version.

I was pleasantly surprised when the high-res photograph of the Golden Gate Bridge turned out wonderfully after sunset, as seen at the top of the post. That was one of the last shots I made that night and the beach was so dark that I needed a flash light to find my way back.

Why did this photograph work? My guess is that the long exposure, smoothed over the details in the water and combined with the darker exposure, hid much of the mesh texture. Upon close inspection, in the water highlights, I see some mesh texture but it’s really subtle. Also, it’s less noticeable on my 15” retina MacBook Pro display. Which probably means, in real life, you have to print really large, in excess of 30 x 40 inches to notice any anomalies.

I was ready to write off doing landscapes in high-resolution when I shot this. On a separate trip, I went up to Muir Woods National Monument, a Redwood Forest just north of San Francisco. The air was so still that I had no problems shooting in high-resolution.

So what does this all mean? For the still life photographer, the high-resolution mode is going to be fantastic. And under the right conditions, it’ll work for landscapes too. Ultimately, it’ll depend on how large you plan to view the image. The bigger question is, in these days of smaller displays, where would you effectively use all these pixels?

In my head, I romantically imagine my beautiful high-resolution urban still lifes printed obscenely large and hung in a gallery. That’s the best way to appreciate the power of this feature. The reality, I’m afraid, is that people will continue to see smallish web sized images and have to take my word on the camera’s performance. But believe me when I say, when done right, the details you get with this high-resolution mode are breathtaking.