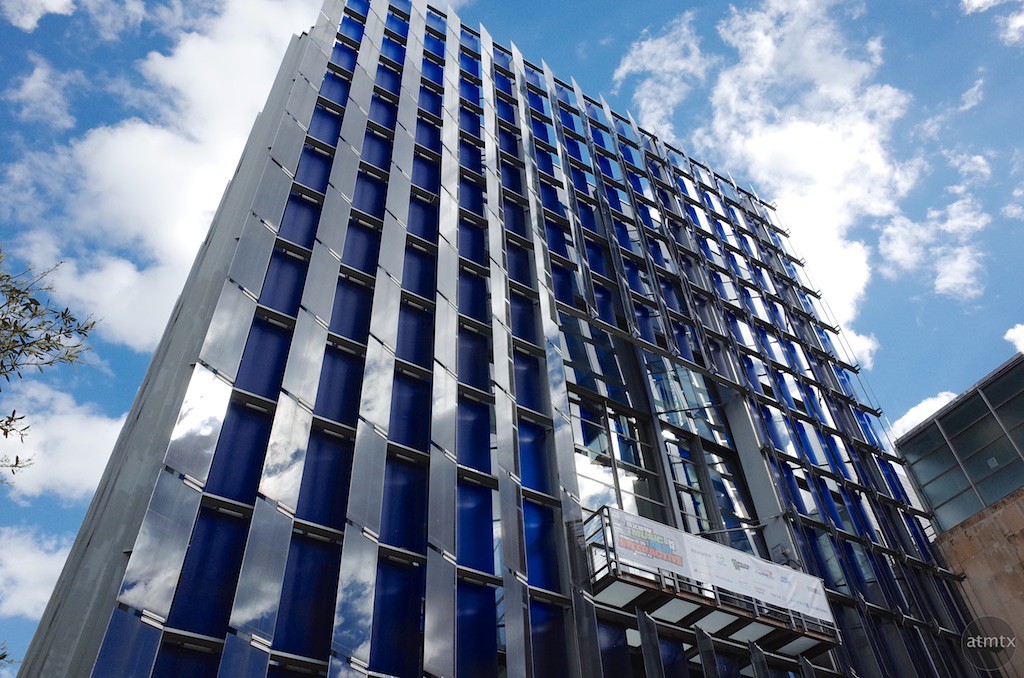 SXSW 2016 was in full swing as I hit downtown last weekend. That was part one, the Interactive and Film portions of this now sprawling umbrella entity called SXSW. I’ve been going for a number of years, as a local outsider, not actually attending the conference, but taking it in from the periphery. The mashup of local Austin mixed with thousands of visitors and pumped up by corporate sponsorships makes for an entertaining photo-op. Especially for someone like me who likes the urban street life.

The city groans from the influx. Our little train gets overwhelmed and events continue to spread throughout the central core. Major installations ranged from west of Congress Avenue all the way to Rainey Street, all emanating from ground zero, which is the Austin Convention Center.

The Hotel Van Zandt, a boutique hotel at the head of Rainey is finally open. It was my first visit and the eclectic but dark decor gave an adequate non-Hilton feel.

The nearby Container Bar was decked out as either an Art installation or corporate promotion — hard to tell which. 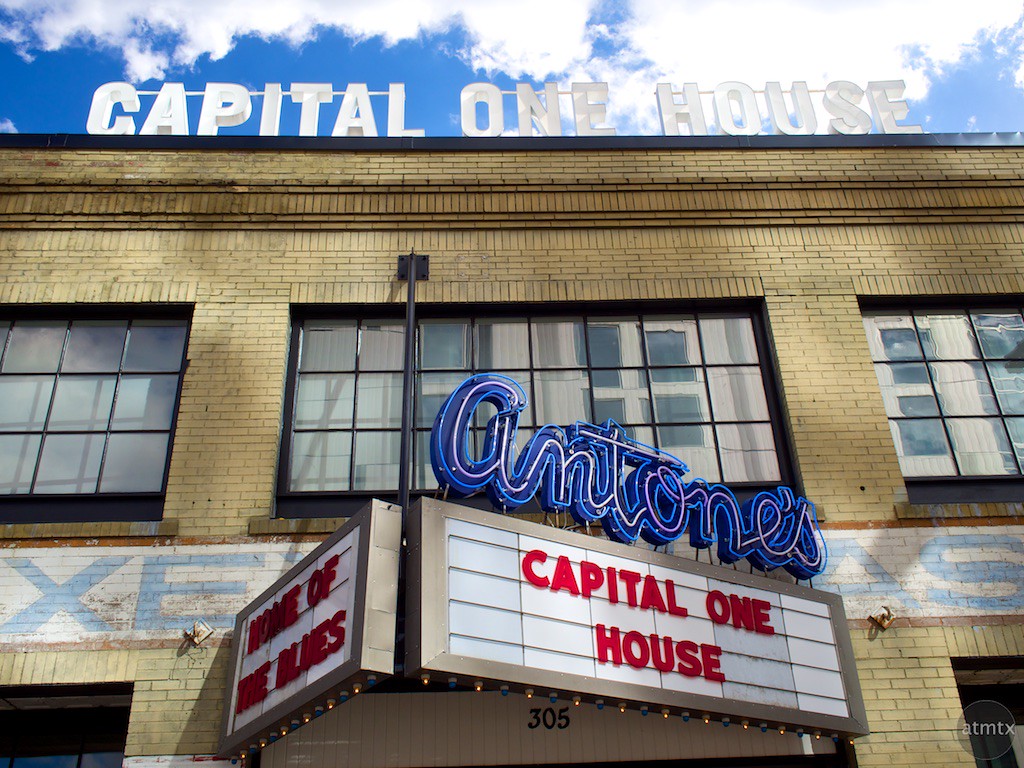 But other installations are less ambiguous. Antone’s Blues Night Club promotes financial services. A restaurant becomes Samsung, which is across the street from another restaurant that showcases things DC (Washington DC, that is). 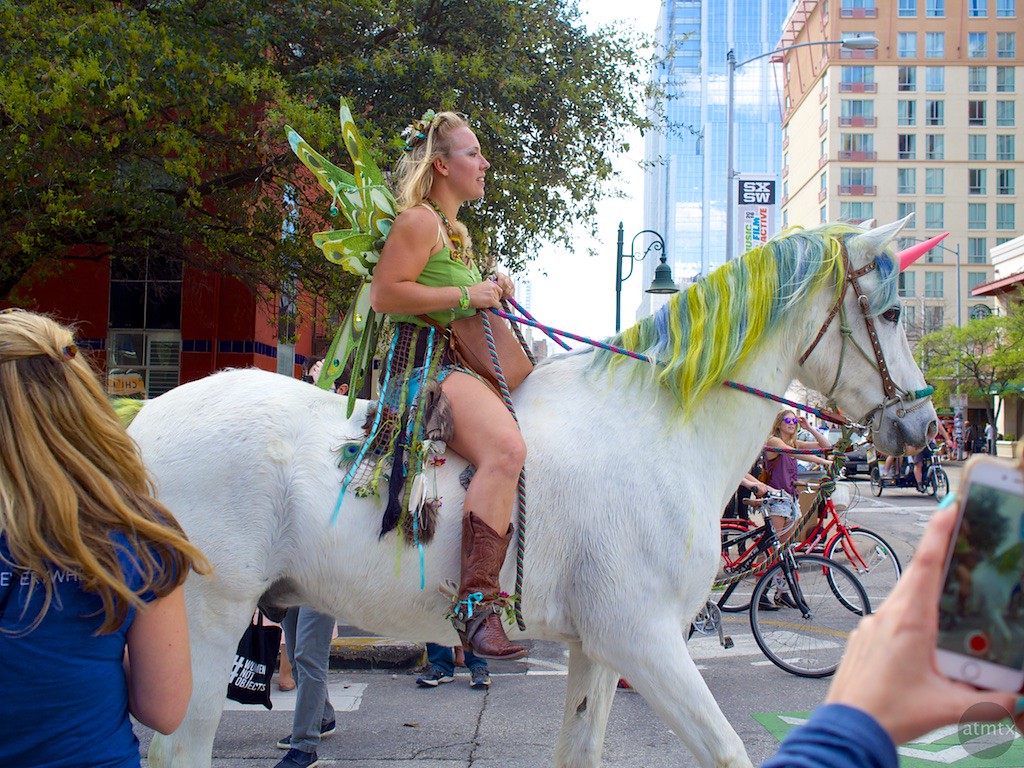 The tech companies were there, of course, but I found those uninteresting. Too tame and they’re hardly enough to rise above the buzz created by the competing entities. This year, the media companies promoting TV shows and movies were the most ambitious. Whether it’s a carnival complete with Ferris Wheel (Mr. Robot) or an inverted church impaled into the ground (Preacher) both make vague references to their TV shows. Disney flew in a life-sized Tie Fighter for their upcoming video release of Star Wars, The Force Awakens.

From my perspective, it was the locals that stood out. Carving their own niche and living the “Keep Austin Weird” slogan in an organic way. Whether it’s a grungy Death Metal pizza joint or a street performer that pulls in larger audiences than corporate eye candy, concocted by marketing departments. Perhaps as these SXSW events get super-sized, the simple and honest performances stand out. What at first seems like filler that just adds the local color — making Austin a desirable countercultural destination — becomes the true attraction.

This huge street performance formed the largest crowd that I saw, spanning the entire width of 6th Street with spectators 8 to 10 levels deep. It bought smiles and laughs which I happily documented. It was refreshing not to see big logos and matching shirts. Just the natural diversity of a city taking in an impromptu show. 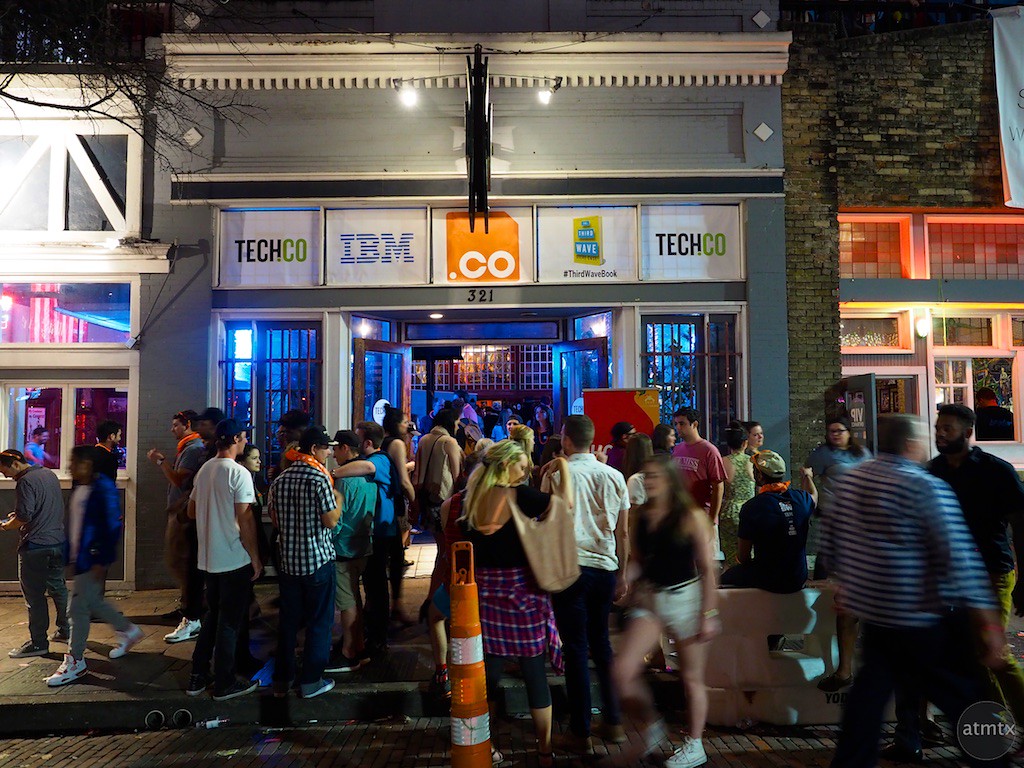 Not to say large company sponsored events are necessarily bad. But it’s nice to see originally. You can brand a bar into some tech focused, something. But more interesting is a Tattoo Parlor, transformed to ink fans of the upcoming Suicide Squad Movie, with real and fake skin art. And in the world of multi-million dollar budgets, it’s the media guys that put on the better show. Maybe the nature of their business, surrounded by creatives, plays a part and has the advantage over analytical and staid tech firms.

But for me, I put my money on the local Austinites. After the elaborate sets are broken down and the slick visitors from the East and West coast leave, we still have the great people who call Austin home. The city becomes quieter but retains its uniqueness. People rest up, saving energy, until the next big event rolls into town.

One thought on “Scenes from SXSW Interactive 2016: Has local Austin color upstaged corporations?”