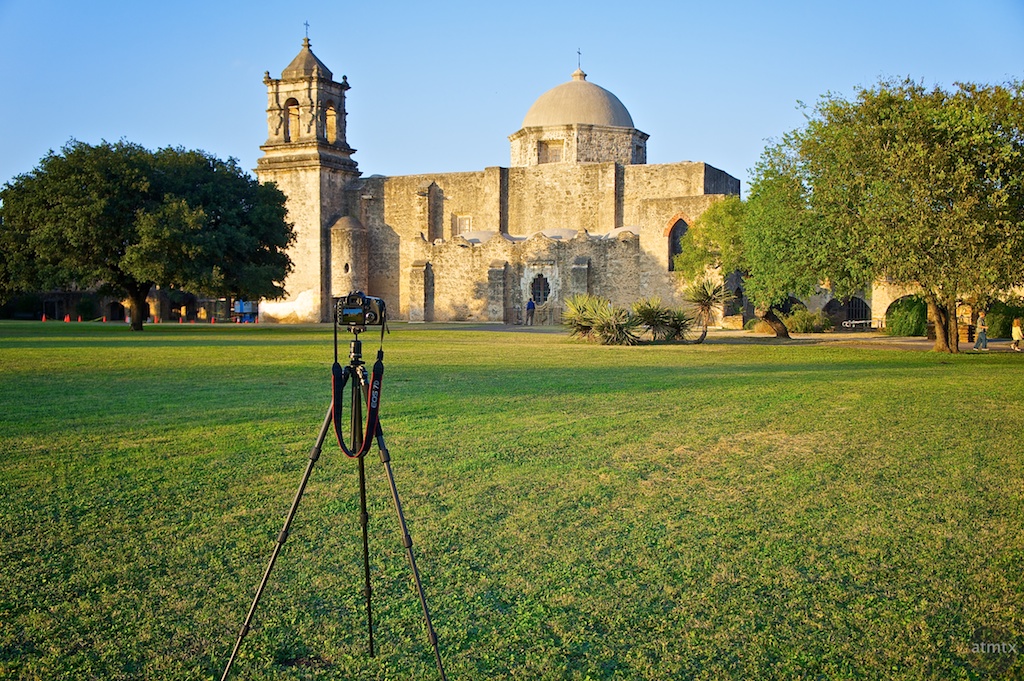 This past Monday, I had the day off so I decided to go on a photography excursion to the San Antonio Missions. I figured that a weekday would be less crowded and it would be easier to take photographs. My friend Steven, also an avid photographer, joined me on the 1 1/2 hour drive down south from Austin. We arrived at our first destination around 10am and as hoped, the crowds were sparse so we enjoyed a nice leisurely day of photography. There are 5 missions in San Antonio of which the Alamo is the most famous and they are all run by the US National Park Service. We opted to bypass the Alamo and go directly to the less well-known missions. The Alamo is, I believe, the most visited site in Texas so it’s always very crowded and they do not allow any interior photography. First stop, Mission Concepcion, the closest mission to Austin after the Alamo.

I brought two cameras with me on this trip. The Canon 7D, my primary camera, had the Sigma 10-20mm super wide-angle lens mounted. I also brought my brand new Sony NEX-5 with the 18-55mm kit lens – nice and light, 2 cameras with only two lenses. The NEX-5 is so small, it’s about the size and weight of some of my Canon lenses. The great thing about having two cameras is that I don’t have to change any lenses in the field. It’s both quicker and easier to capture images and reduced the chance of getting dust into the camera. My general plan was to do my high-resolution, wide-angle photographs with my 7D and do a bit more free form stuff with the NEX-5. I was also planning to do some HDR photography with both cameras to see how they compare. For this reason, I actually brought two tripods. My tripod unit I use on my 7D as well as a tiny table-top tripod for the Sony.

I just finished processing all the photos from the trip and I’ve added a small sample from both cameras. I took loads of photographs and I’m pleased with the images that I have created. One thing I discovered, I can’t tell the difference between photographs I took with the 7D and the NEX-5. I found that I needed to go into my Aperture 3 library’s EXIF information to see which camera I used. Sure the 7D has higher resolution and more detail and the colors are a bit different however, after I post-process the images and view them in my library, they look about the same. This is great news since I effectively have a small second camera when I do my “serious” architecture and landscape photographs. I purchased the Sony primarily as my family camera, its nice to know that I can use it for so much more.

So here is a smattering of images I took that day. Try to guess which one was taken with the Canon or Sony. The first one, at the top, is an easy one to guess. As always, you can click on an image on my blog to see a larger version. The answers are at the very bottom of this blog post.

[View all of my images from the San Antonio Missions] 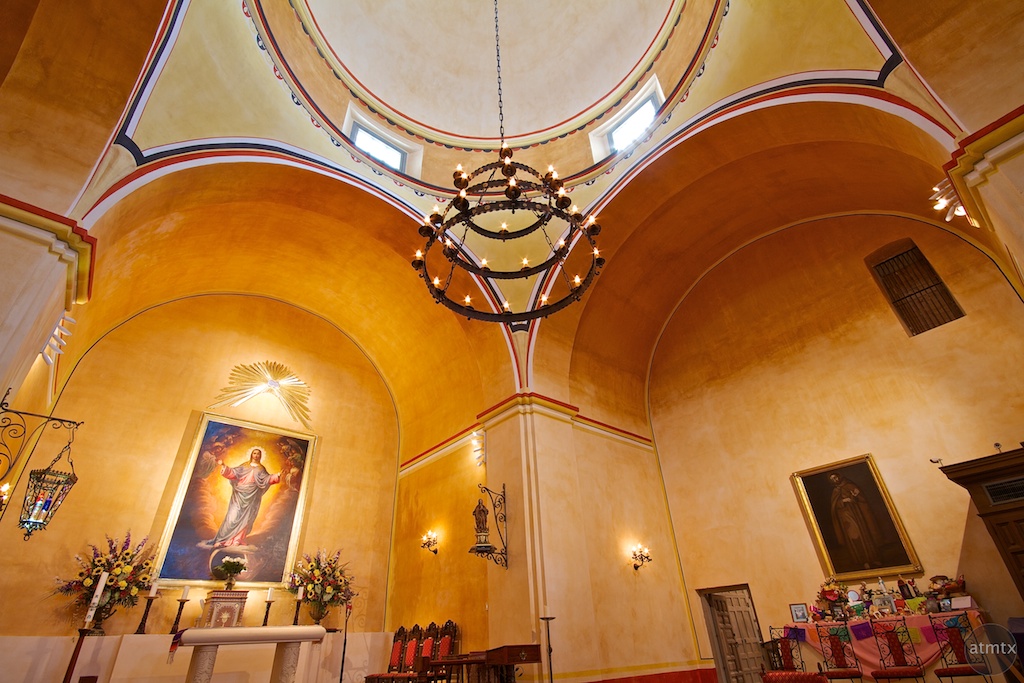 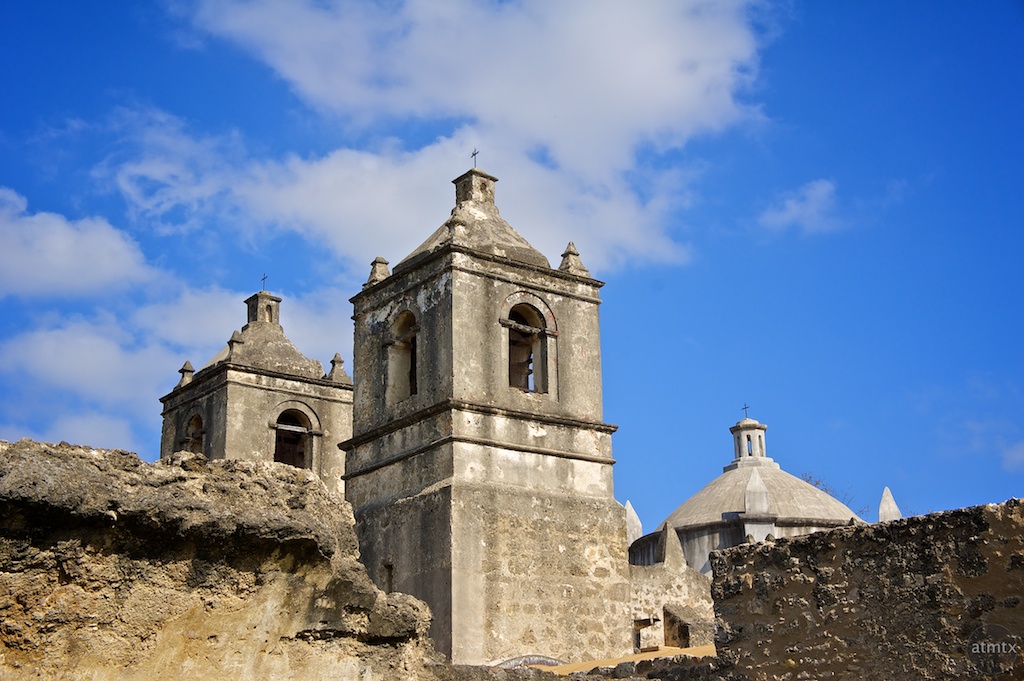 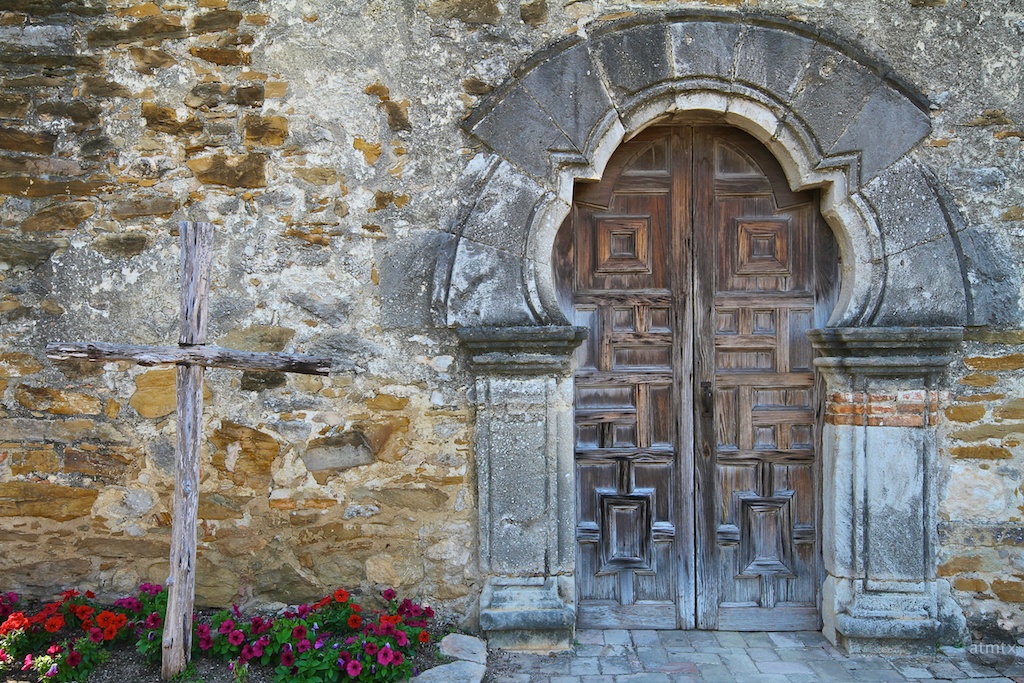 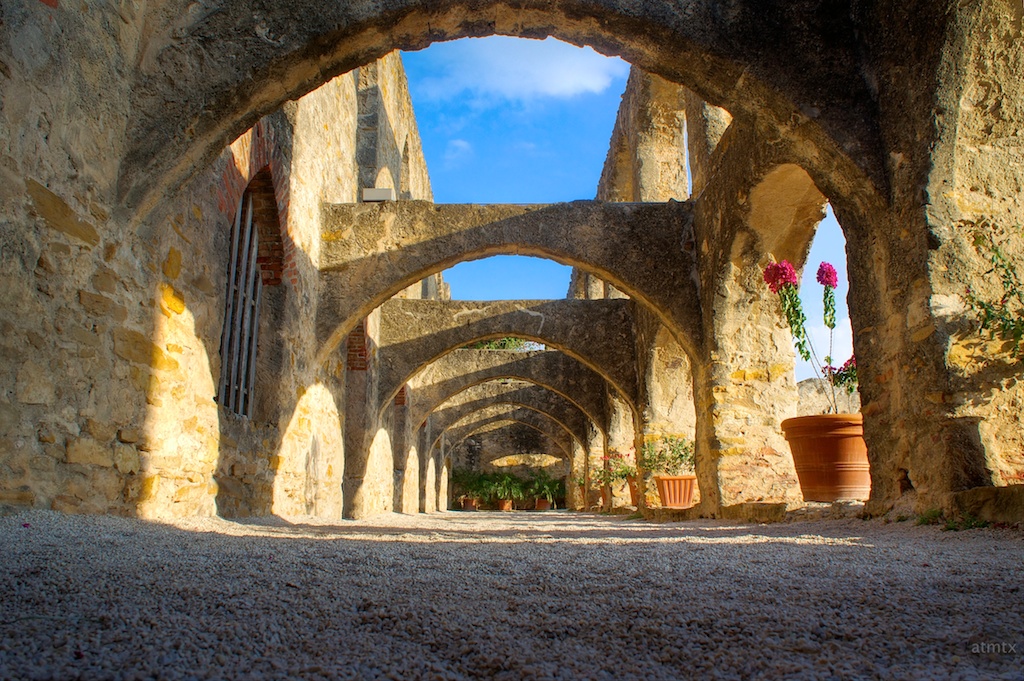 I wanted to use both cameras to capture the many details of these old historic sites. There are so many rich details in these old structures that it was very enjoyable to make images. I wanted to capture the texture of the of the exterior stonework as well as the peaceful interiors. I also attempted to change my vantage point to add some variety to my images.

Image 1: The golden, evening light was perfect, casting its warm glow on Mission San Jose. I was taking photos with my 7D and thought it would be fun for the blog to include a behind the scenes look at my usual setup. Nothing too exciting but it nice to have context once in a while. My tripod, pictured above, is a carbon fiber Induro C014 with a Manfrotto 484RC2 head. The combined weight of both the tripod and head is just a touch over 3 pounds. It’s very light and I bring it almost everywhere with me. This setup is steady enough for my wide-angle lens but its is not robust enough to shoot long exposures with my Canon 70-200 F4. It works great for me right now since I wanted maximum portability and light weight. Photograph taken with my NEX-5.

Image 2: The interior of Mission Concepcion was beautiful and subdued. It was elegant and not gaudy. I wanted to capture the wonderful curves of the arches and dome. It might have been easy to guess that this was taken with my Canon 7D with a super-wide lens. A super-wide lens adds distortions that stretches the depth of the image. It emphasizes the curves and increases the dramatic look.

Image 3: The towers of Mission Concepcion were isolated using a longer zoom. I used the Sony NEX-5 to zoom in and reduce the visual clutter of the surrounding walls and trees. A wide-angle would give an entirely different look that I believe would not work as well in this case. I wanted to capture the two towers and the dome. I think it has an old world, almost European feel.

Image 4: The entrance of Mission Espada was my favorite. Its small, intimate scale along with the ornate shape and stone details were fantastic. I wanted to balance the simple cross with the doorway. Though this photograph could have been taken with either camera, it was taken with the Canon 7D.

Image 5: The arches of San Jose is my favorite part of this mission. It’s located on the backside of the church. We were there at the perfect time towards the end of the day with the golden light. I wanted to capture the repeating elements, the arches and the shadows. The lower point of view, I think, adds some more interest to this photograph. This is an HDR image taken with the Sony NEX-5. I used my small table-top tripod to take 3 photos with -2, 0 and +2 stop exposures. Unfortunately, since the Sony does not do a 2 stop bracket (it only does 1/3 or 2/3 of a stop), I manually adjusted the exposure after each shot.

All of the photographs were taken in RAW with the Sony NEX-5 and the Canon 7D. There were post processed using Aperture 3. I mainly added sharpness, increased color saturation and changed the white balance. The HDR was created using my standard process of using Photomatix for image blending, Pixelmator for layer blending and Aperture 3 for final adjustments.

One thought on “A Photo Excursion to the San Antonio Missions”