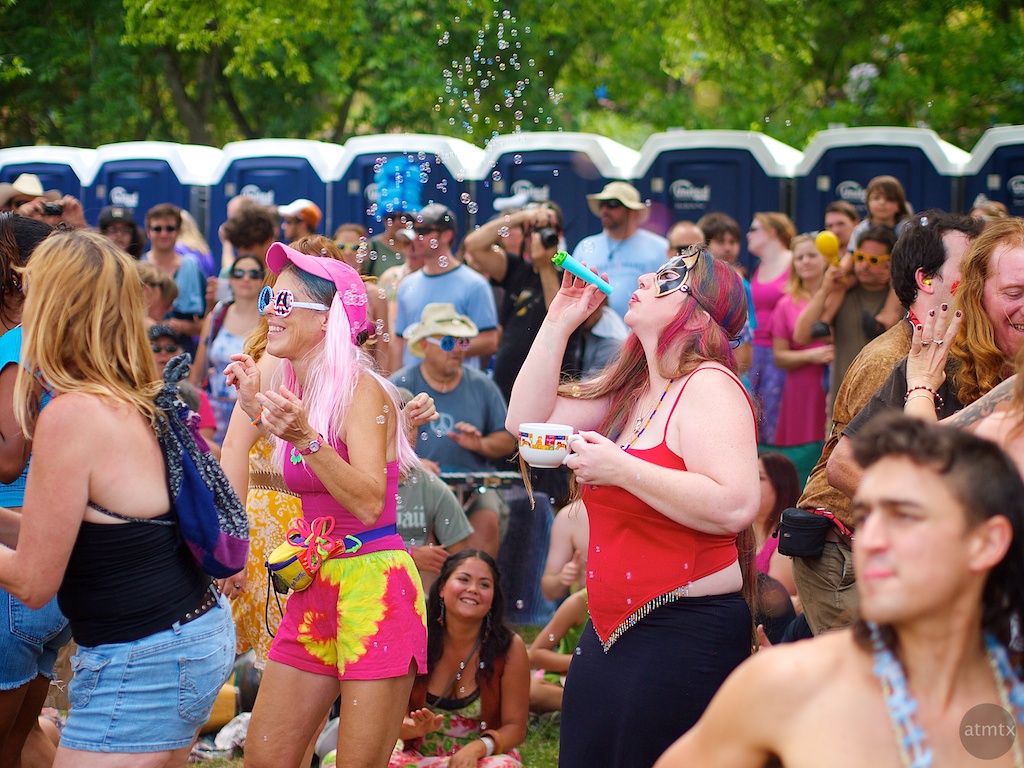 Eeyore’s Birthday Party is something that I’ve head of, ever since I moved to Austin 20 years ago. It’s an Austin spring ritual and after all these years, it’s still supposed to have a 60s, hippie vibe. For the longest time, I really wasn’t interested in going. I never identified with the 60s, I’m probably more a product of the 70s. As my love for photography increased, however, I began to take more trips downtown and to events around Austin. Eeyore’s started to peak my interest but my schedule never seemed to work out. Also, as my friend Kirk Tuck mentioned, Eeyore’s Birthday Party is something best photographed with a smaller, intimate camera. Kirk has covered Eeyore’s many times on his blog and this year he again talks about using one camera and one lens to best cover the event. I felt a bit self-conscious bringing a larger DSLR to the event, so in the past, I used this as an excuse to stay away. This year, with my new-found love for smaller cameras, especially the Olympus Pen series, I finally had the perfect small camera to use.

I got there early, right around noon, and stayed several hours. I’m told the place really doesn’t get hopping until later in the day. Even so, I found an interesting mix of people and a large contingent of photographers. To my surprise or maybe disappointment, many sported fairly large cameras, some with multiple DSLR bodies with large telephoto lenses. I found this a bit strange I guess; it just didn’t meet the expectation of the environment that I had imagined. After all we weren’t going on a safari where we were trying to photograph wild animals at a distance. I was expecting a more intimate, crazier and more free-spirited place where outsiders with large, tactical cameras would feel out-of-place. There were lots of eclectic people around, in costume, but there were more onlookers than participants. I too was a mere onlooker with a camera, not wearing any special garb. And just because I sport a smaller camera, it doesn’t mean that I necessarily fit in better than someone with a larger camera. Equipment aside, I do think, however, that my style of shooting and engaging with my subjects gets me closer to the event. Certainly compared to someone who uses a large telephoto lens. I didn’t shoot the action from afar; I was shooting amidst the people dancing and celebrating. I created portraits, up close, with permission.

I brought two cameras with me, tucked away in a small, brown, Domke camera bag. I had my Olympus E-P3 with the Olympus 45mm f1.8 lens and my second camera was a Olympus E-PL1 with the Panasonic 14mm lens. Overwhelmingly, I used the 45mm lens that day which makes for an excellent portrait lens. It also gave me enough distance that I can shoot the action without being in the face of my subjects. I found the 14mm, which is equivalent to a 28mm after accounting for the crop factor, too wide for Eeyore’s. There was too much clutter shooting the crowds and I found the deep depth of field too distracting. By shooting the 45mmm with a large aperture, I was able to reduce my depth of field to better isolate my subjects. You can still see the crowds but they are slightly out of focus which makes for a cleaner composition. 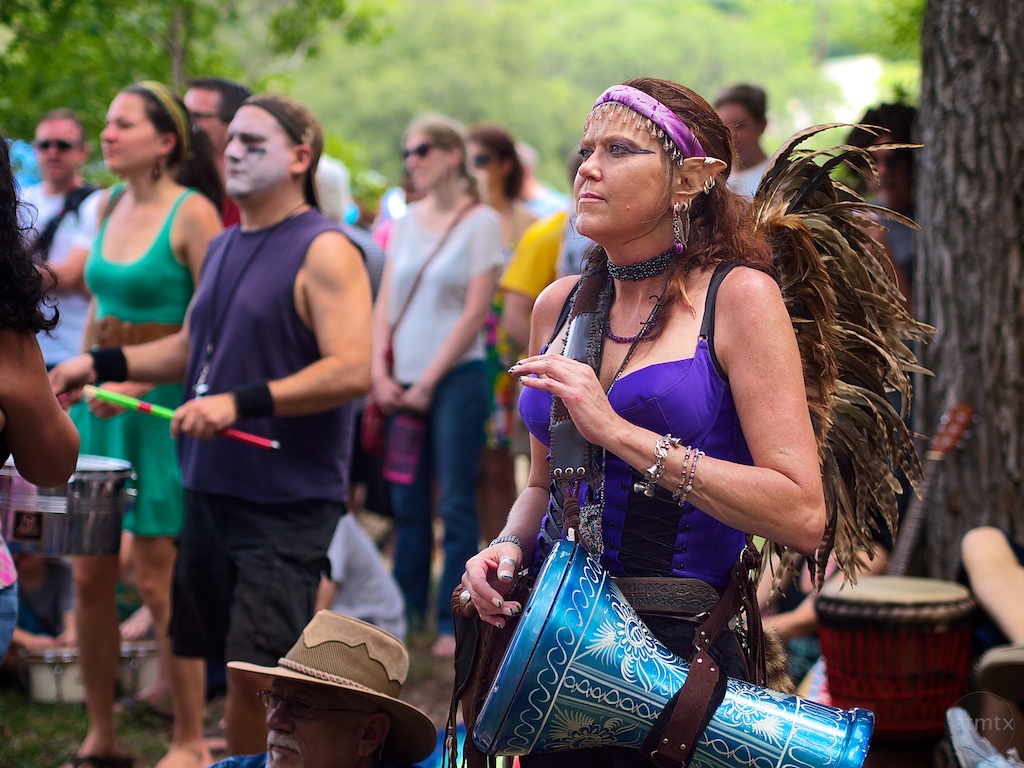 There was much to photograph but I ultimately concentrated on taking two types of pictures. I shot candid images of people in the drum circle. This seemed like the heart of the event and the most interesting people congregated there. Exposure wise it also worked well since the area was shaded, allowing me to get better quality images. Mid-day direct sun is nasty lighting and best avoided if you can. I also took portraits of the more colorful personalities that I encountered. Since I’m taking a lot more street candids these days, I feel less intimidated going up to people and asking for a portrait. Especially here at Eeyore’s. You can bet that if a person went to the trouble of getting dressed up, they would feel honored to pose for a photograph. For photographers who are shy, this type of place is a perfect opportunity to practice asking people. If you missed Eeyore’s or don’t live in Austin, think of other events where people would love being photographed. Certainly Halloween parties and Street Parades are places that come to mind. 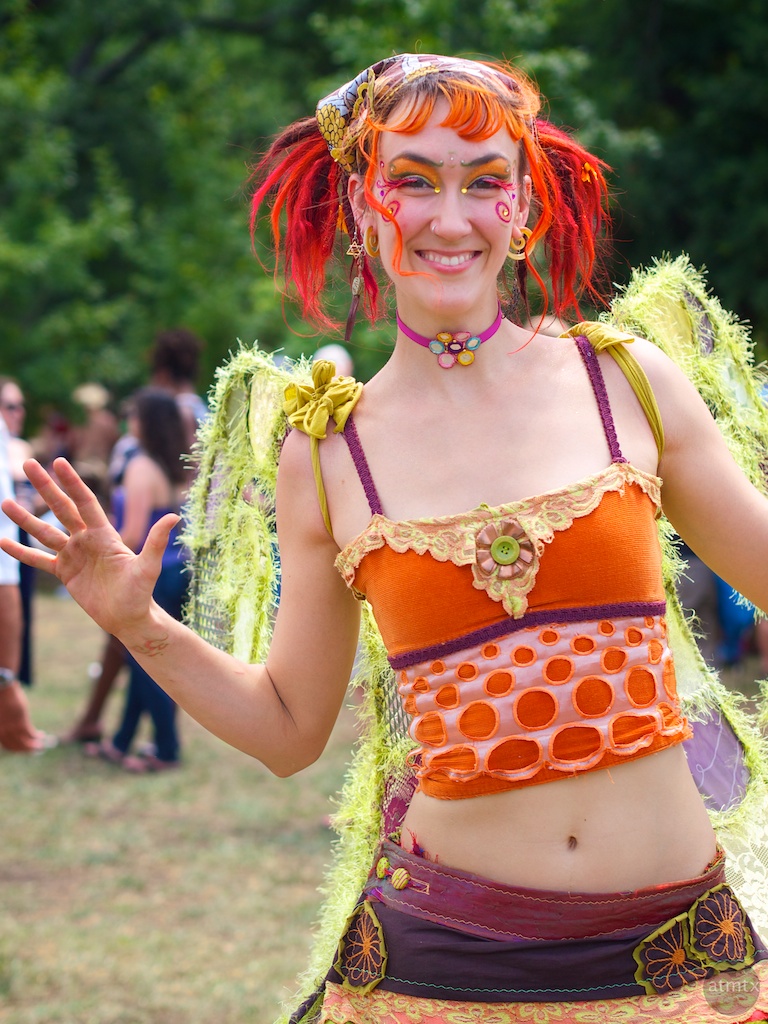 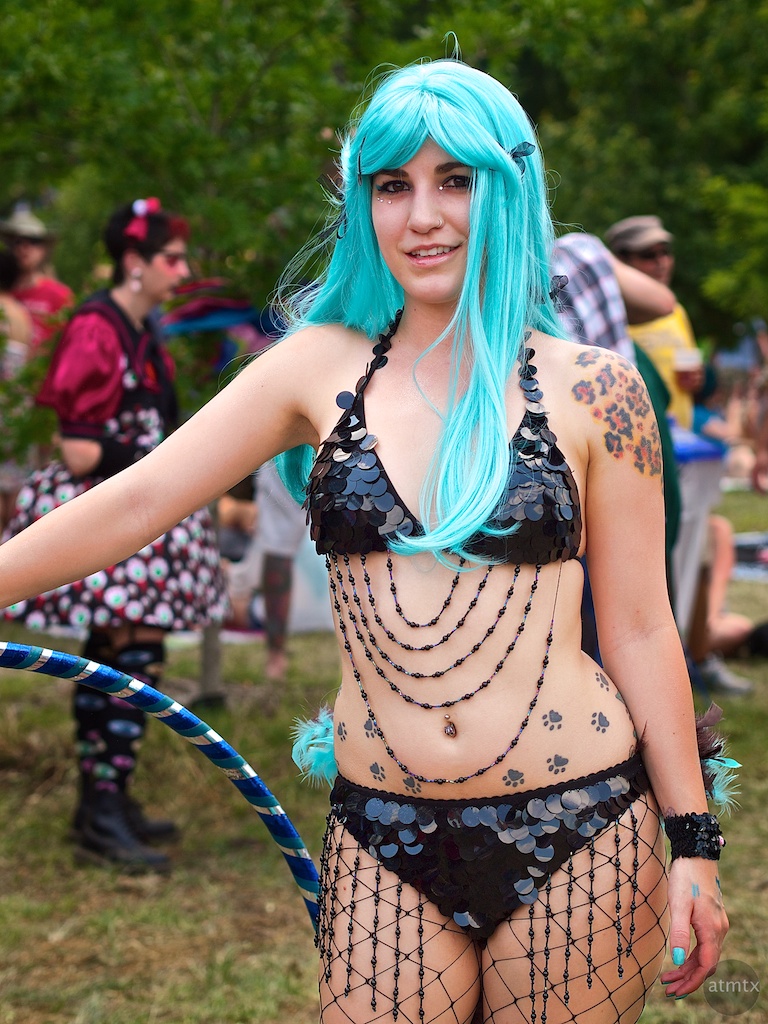 The early part of the day was cloudy which worked out great for taking photographs. Even mid-day, overcast skies softens the light and prevents that really harsh lighting and shadows that can ruin a portrait. Later, the clouds began to break and I had to contend with the harsh sun; photos under these conditions are not great. On portrait shoots, I would ask the subject step under an awning or get into a shade of a building, though usually, I would not schedule a portrait session for mid-day, if I had the choice. At Eeyore’s I just shot wherever and whenever I ran into an interesting subject. These next three photographs were taken in varying degrees of direct sun. Shooting in RAW mode allows some post-processing latitude which can improve images somewhat but it’s still not ideal. In cases like these, using a fill flash, outdoors, can also soften the shadows. Here is where my little Olympus Pen is at a disadvantage. The small, built-in pop-up flash won’t help too much. Attach an external, powerful flash especially with high-speed syncing capabilities and you can end up with decent images in direct sun. When I use my Canon 7D, this is the way I shoot outdoor events. Of course, an external flash can be attached the Olympus Pens too but the ergonomics of a big flash and a small camera body is not the best. 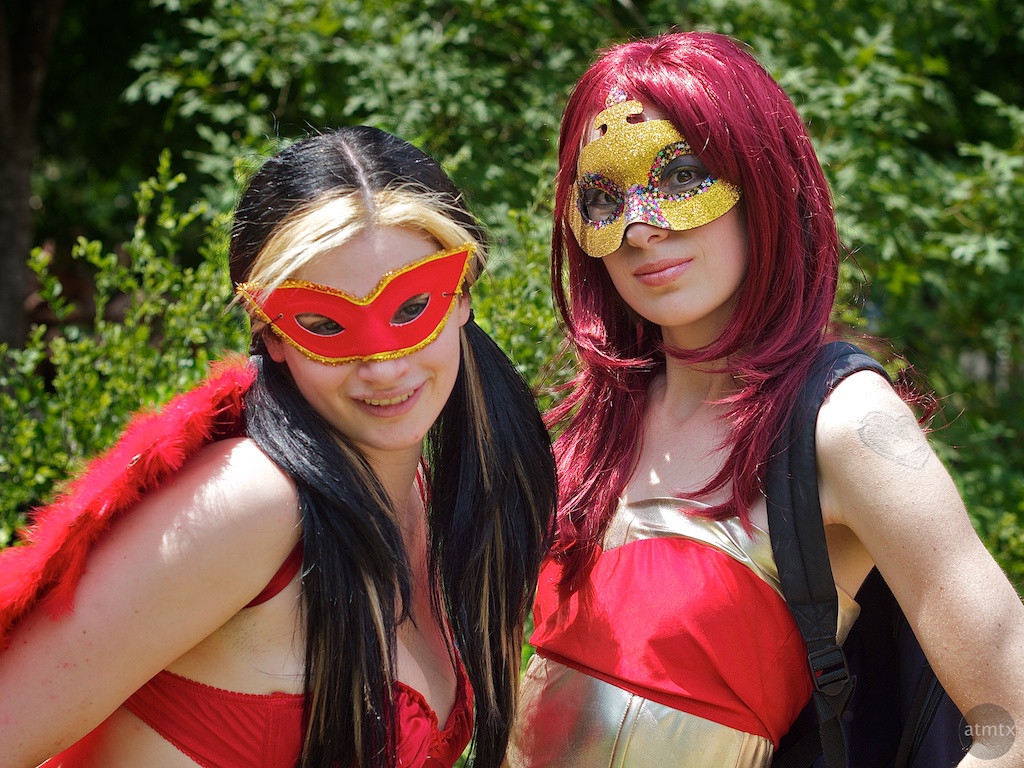 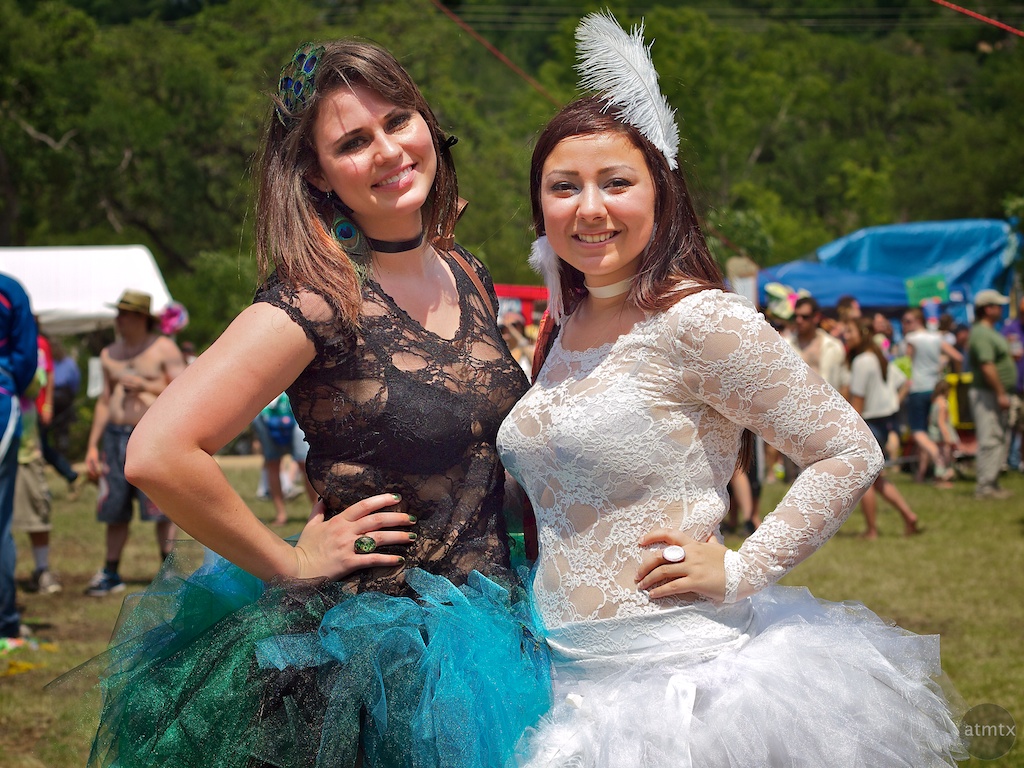 While having a DSLR with an external flash may work better for reducing the effects of harsh light, using the E-P3 was a blast. I can carry it and another camera with ease. After hours of use, the equipment didn’t dragged me down. It also think it works better for the closeup, intimate portraits that I made; the camera is unobtrusive and non-threatening. I was also surprised that three people at the event thought that my little Olympus was a film camera. I guess the retro influenced styling is distinct enough to be noticed by non-photographers too. During Eeyore’s I ran into a couple of photographers that I knew, including Kirk Tuck. He was sporting his new Sony and a single lens. We talked for a few minutes, shot some around the drum circle, and went our separate ways. It was also fun to see his work, on this blog. Though we both packed light and shot with basically a single camera (I hardly took any pictures with my second camera), his style and mine are different enough that I enjoyed seeing another point of view; the images are both recognizable and different at the same time.

Finally, I present the last two photographs. The hula hoop dancer wins my vote for having the best time. I think she best shows the fun and energy of the event and matches my imagination of what Eeyore’s Birthday Party is or was in the past. The second photograph of Patricia and Sallie wins my award for the most color coordinated. Gotta love how they match in color down to their umbrellas and how the green and red primary colors creates contrast. A wonderful sense of style and something you don’t see everyday. 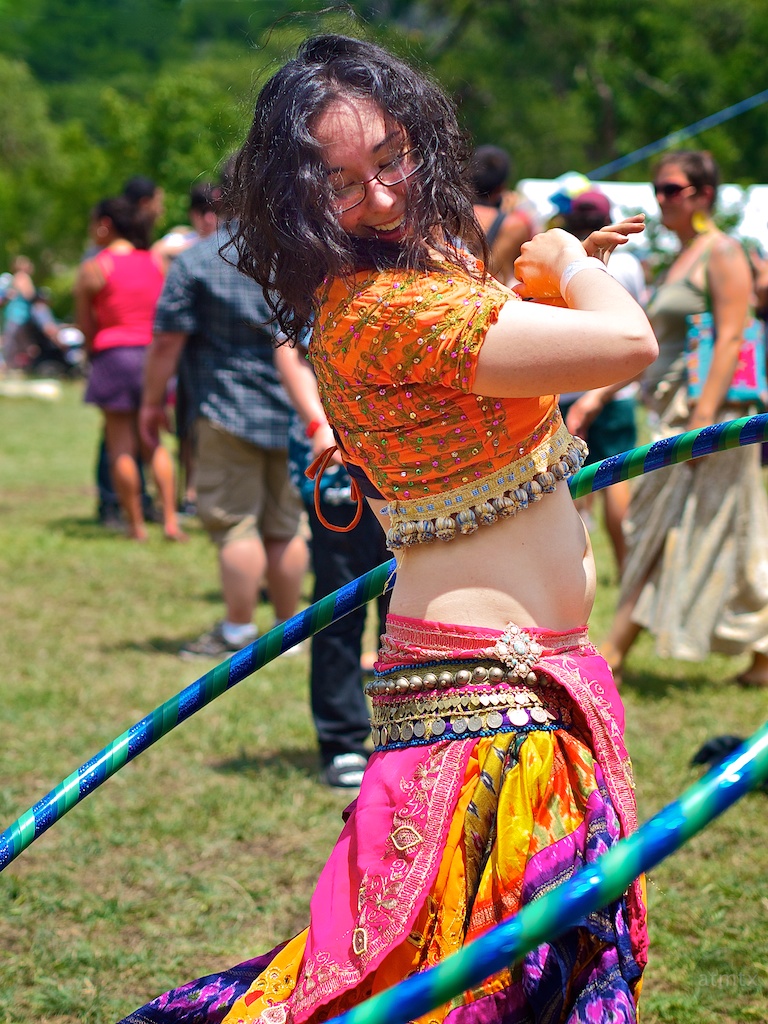 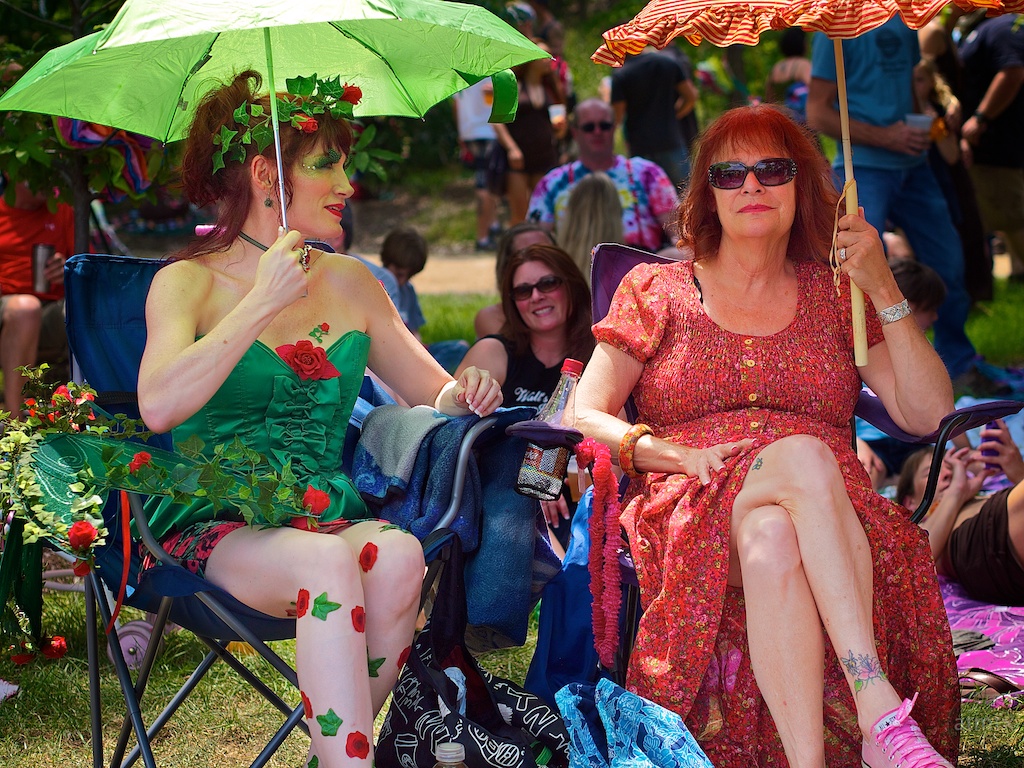 I took these photographs with my Olympus E-P3 with the Olympus 45mm f1.8 lens. Please click on a photograph to see a larger image and hover over the photo to see the exposure details.

6 thoughts on “Eeyore’s, The Last Remnant of Hippie Austin”