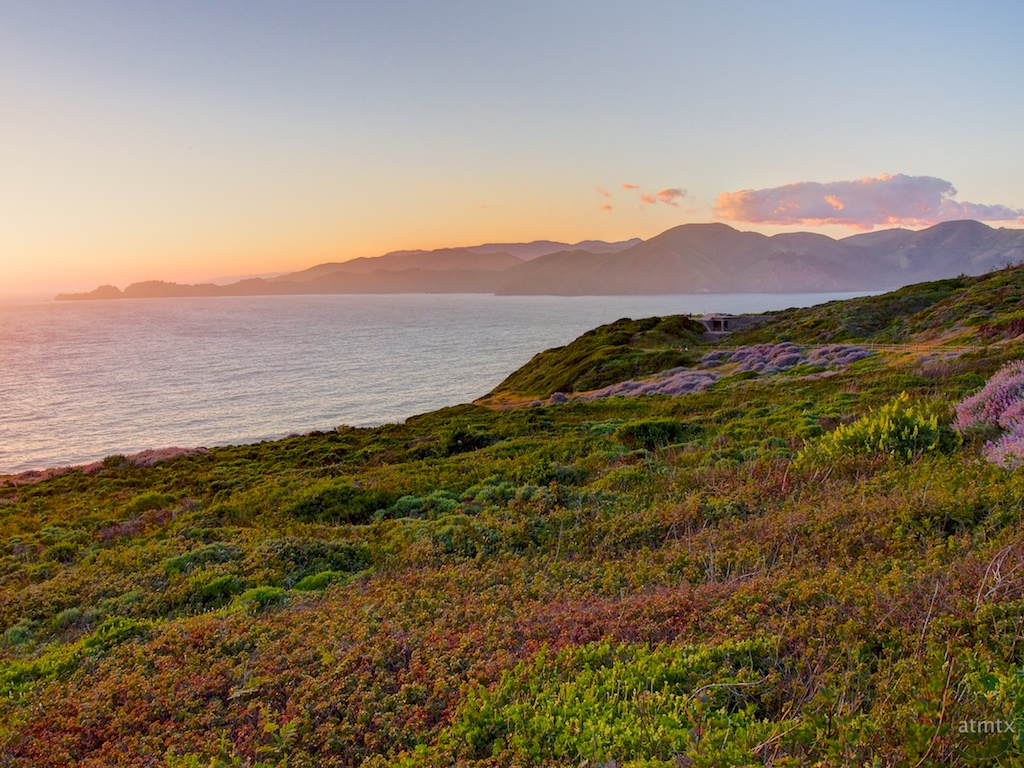 Wildflowers and the Bay at Sunset – San Francisco, California

My timing was perfect. I arrived at Battery Crosby on the western shore, near the northern part of San Francisco, a few minutes before sunset. I came here to shoot the Golden Gate Bridge. It was awesome.

I usually don’t shoot traditional landscapes, the kind filled with nature. I’m a city person and gravitate towards the urban look. But when I saw this view from the road — It took my breath away. It was 7:30pm in a quiet nature filled area called The Presidio. I parked on the broad shoulder on Lincoln Blvd near the Battery to Bluffs Trail. I’m not sure if this is an authorized parking spot but I took my chances behind one other vehicle.

If you look at the larger view of the first photograph, you might make out a concrete bunker to the center left. This is the remnants of Battery Crosby a defunct installation that once housed a gun that protected the bay. I shot nature along the path leading from the road to the battery, taking in the sunset and soaking in the sounds of the surf. As I approached the concrete bunker, I saw majestic views of the world-famous Golden Gate Bridge.

For the first time, I used the standard Olympus 14mm – 42mm kit lens that came with my Olympus E-PM2 camera. I normally shoot with prime, non-zooming lenses — they are smaller and usually of higher quality — but I wanted to use this kit lens for two reasons. First, to test the image quality of this inexpensive but well-regarded lens. Second, I knew I wanted to shoot the bridge from different focal lengths and I didn’t want to bother switching prime lenses. Zooms are certainly convenient for these purposes, allowing me to shoot anywhere from a 28mm to 84mm equivalent with a twist of the lens.

From on top of the battery and the stairs leading down on the other side, there are no bad views of the bridge. I suggest moving around, up or down the stairs, to get your preferred framing. I took the two photographs below from the same spot on the stairs. The first one at 28mm and the next one at a 70mm equivalent. I was waiting for the skies to darken and the bridge to light up. EXIF data says it was shot around 8:14pm on April 13th. That’s about 25 minutes after sunset. I like the way it came out with the golden red contrasting against the cool blues of the sky and ocean.

I’m also pleased with the performance of the kit lens. It just goes to show that even the standard plastic lens can produce some great images. My prime lenses are still higher in quality but the increased versatility is an acceptable trade-off in this case. The only visual anomaly, the star bursts of the bridge lights were not crisp and had a strange pattern. I’m not sure if this was due to the lens or that I was hitting diffraction limits at f13. Either way, it’s not really noticeable unless you zoom in. All 3 photographs are HDRs combined in my usual subtle but colorful way. The first photo was combined from 3 exposures. The bridge shots were a combination of 4 exposures.

To get there, use your favorite mapping software and enter Battery Crosby. I would time your arrival from 30 minutes to 1 hour before sunset depending on how much you want to explore. For urban photographs, like the bridge, I like to stay at least 30 minutes after sunset to catch the blue hour. The yellow city lights against the blue sky makes for a nice color contrast.

WARNING: Be careful walking around the concrete structure after sunset. The trails and steps run through the concrete battery area and there are no fences at the edge of the concrete. Under dark conditions, you can easily walk off the edge and seriously or mortally hurt yourself. I was lucky that I could still make out the edges of the drop off. Definitely have a flash light and proceed with caution if you are up there after dark.

20 thoughts on “Battery Crosby and the Golden Gate Bridge”