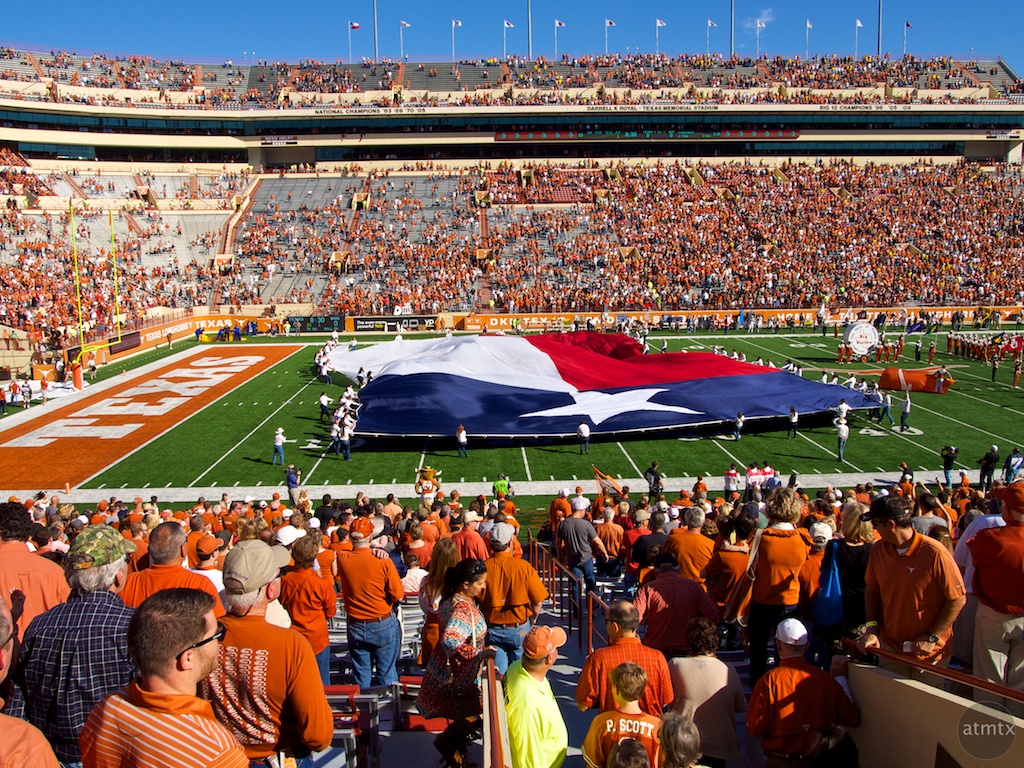 In the 23 plus years I’ve lived in Austin, I’ve never been to a University of Texas football game. I got that opportunity this past weekend. My wife graduated from the University but it’s also been 20 years since she’s gone. We both had a great time, thanks to my friend Mark who generously gave us the tickets.

As you can tell, we had excellent seats. My wife remarked, as a student, she was stuck way up there in the nose bleed section. While photographically, a super wide-angle or fisheye would have rendered some interesting compositions from way up there, I was glad to have these seats as a football spectator. I didn’t do much exploring. I was content to take occasional snaps from where we sat. 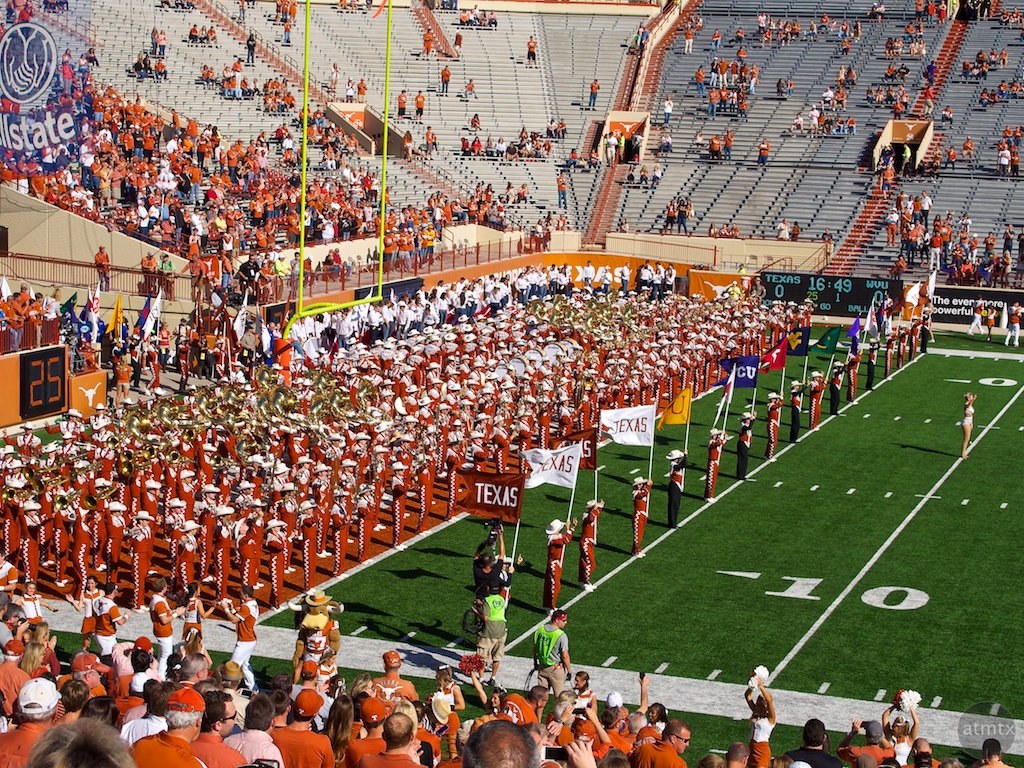 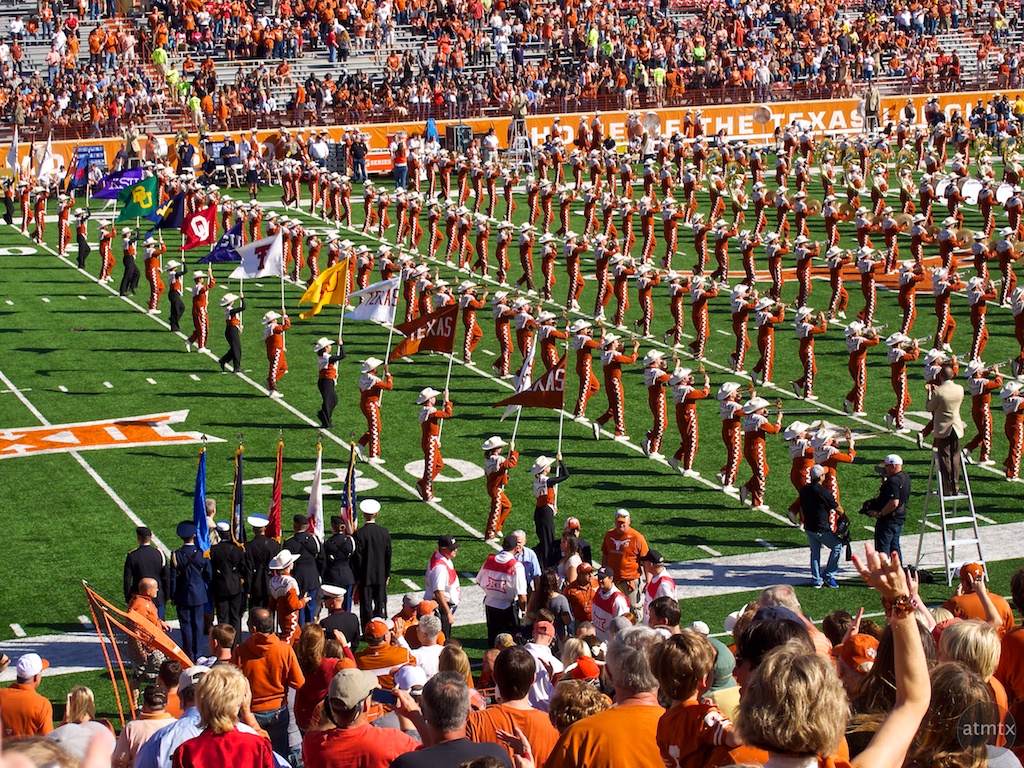 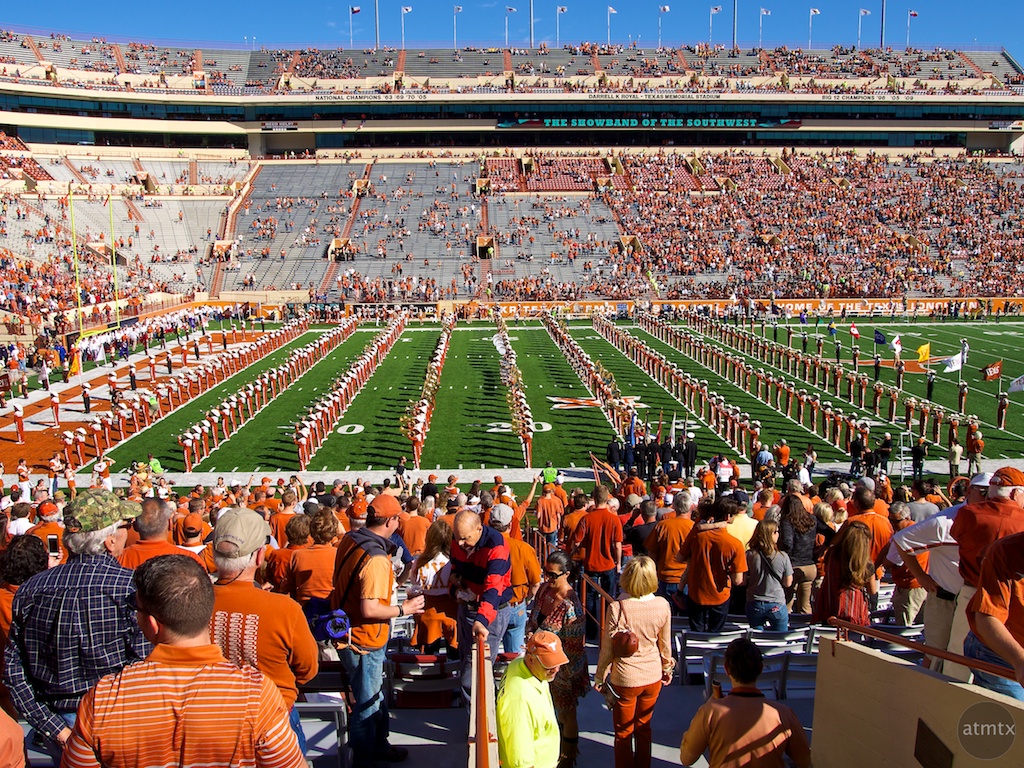 And as much as I enjoyed the football game, I was equally entertained by the band, the flags and the spectacle that surrounds the game. The precision of the marching band and the pageantry of the flags made for more interesting images, I thought. At least from this level. While I also shot the game, I like the photographs from the pre-game more.

My gear selection, which always involves an interesting set of calculations, centered on being unobtrusive. The UT stadium allows detachable lenses of less than 10 inches. I remember vague, anecdotal comments of people being restricted from bringing “professional” cameras so I purposely went small to fly under any radar. I brought my Olympus E-PM2 with kit lens which looks small and non-threatening enough. I paired that with a small film camera that I recently purchased that I’m in the midst of reviewing. All told it was a humble setup that fit comfortably in my small Domke bag. In retrospect, I wished I also brought my Olympus 40-150mm. The security bag check looked much less imposing than I imagined.

The afternoon was a success though, both for the Texas Longhorns and for my wife and I. Texas beat West Virginia soundly 33 to 16. We had a great time and I got to take snaps of the event. Nothing fancy. I wasn’t shooting on the field and had no illusions of being a sport photographer. All that I was going for was some nice pictures to remember the event. I even pressed my iPhone 5S into service for a decent looking in-phone panorama. 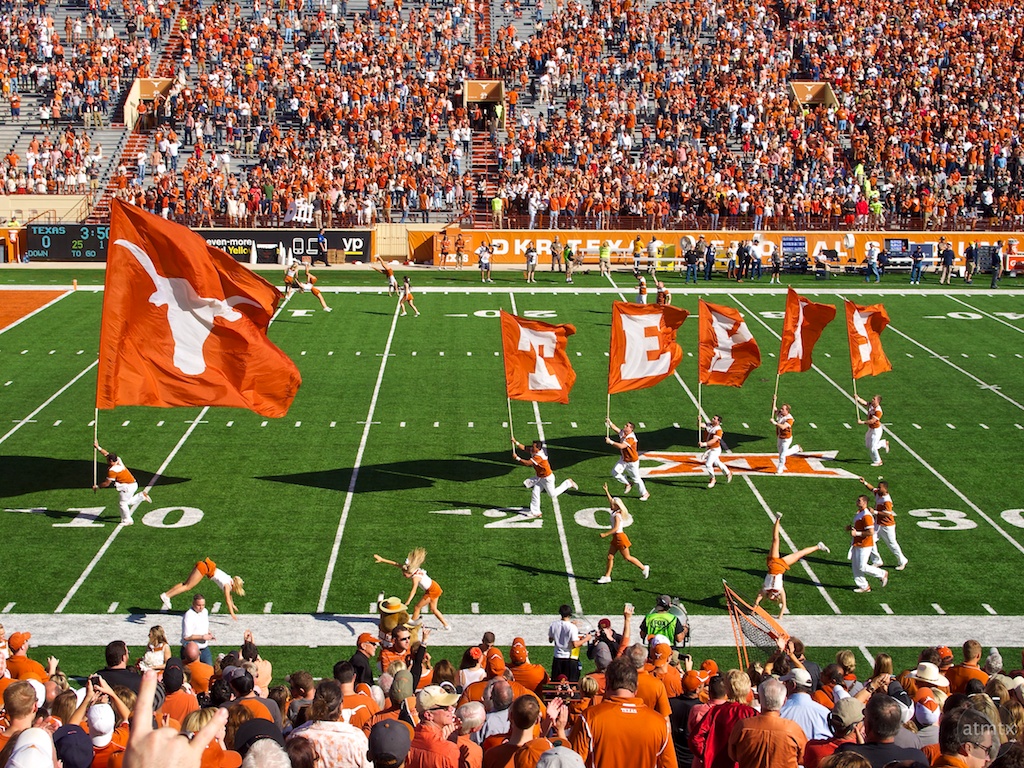 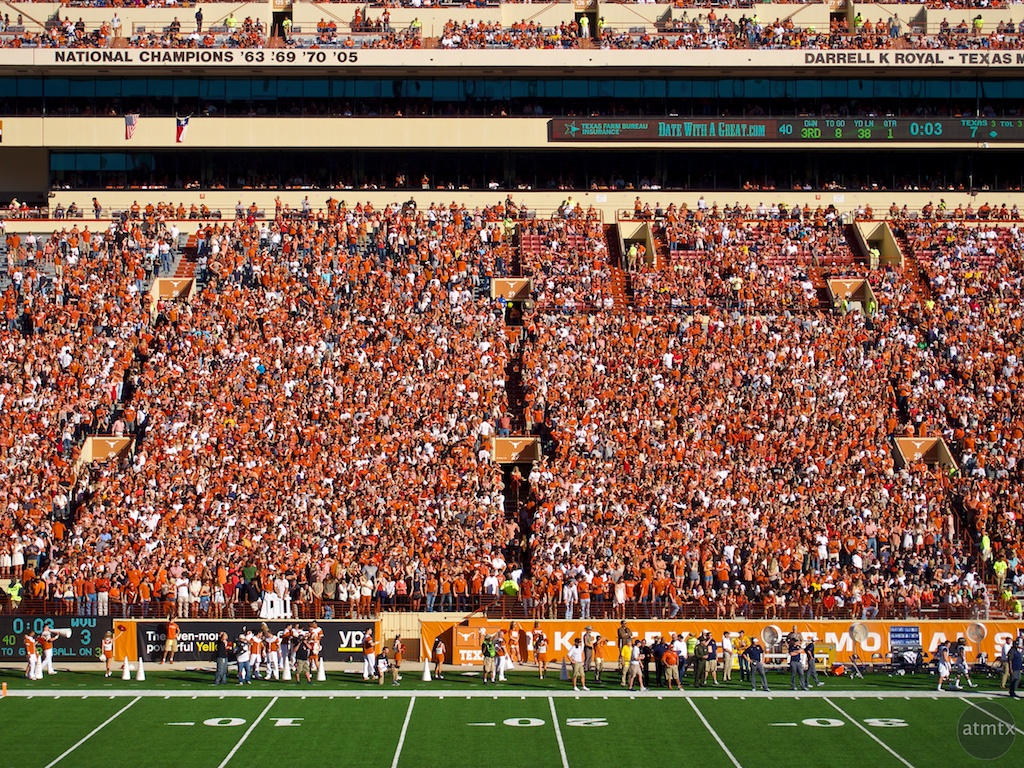 It occurred to me that a compact super zoom would’ve of been an ideal camera. Something small that wouldn’t raise the suspicions of guards on the lookout for wannabe pro photographers. Ironically, with all my different cameras, I don’t own a single super zoom. Nope, I’m not in the market for one either. After shooting for months with a fixed lens 35mm equivalent Fujifilm X100S, the 28mm to 84mm equivalent Olympus setup felt more than enough from my needs. 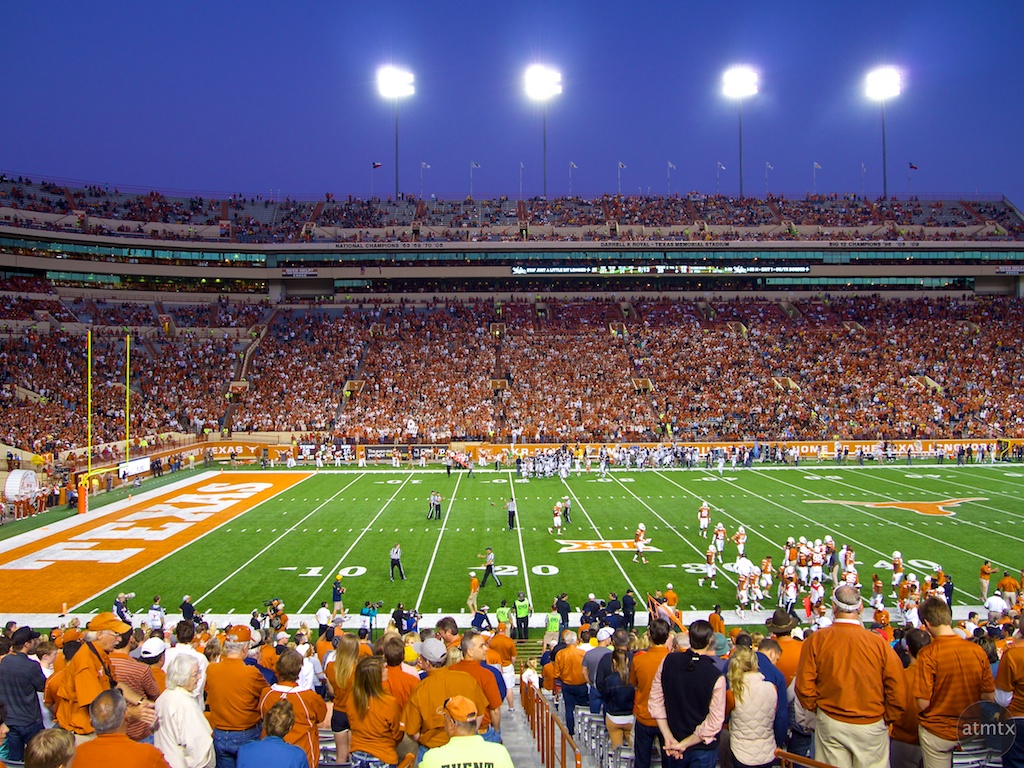 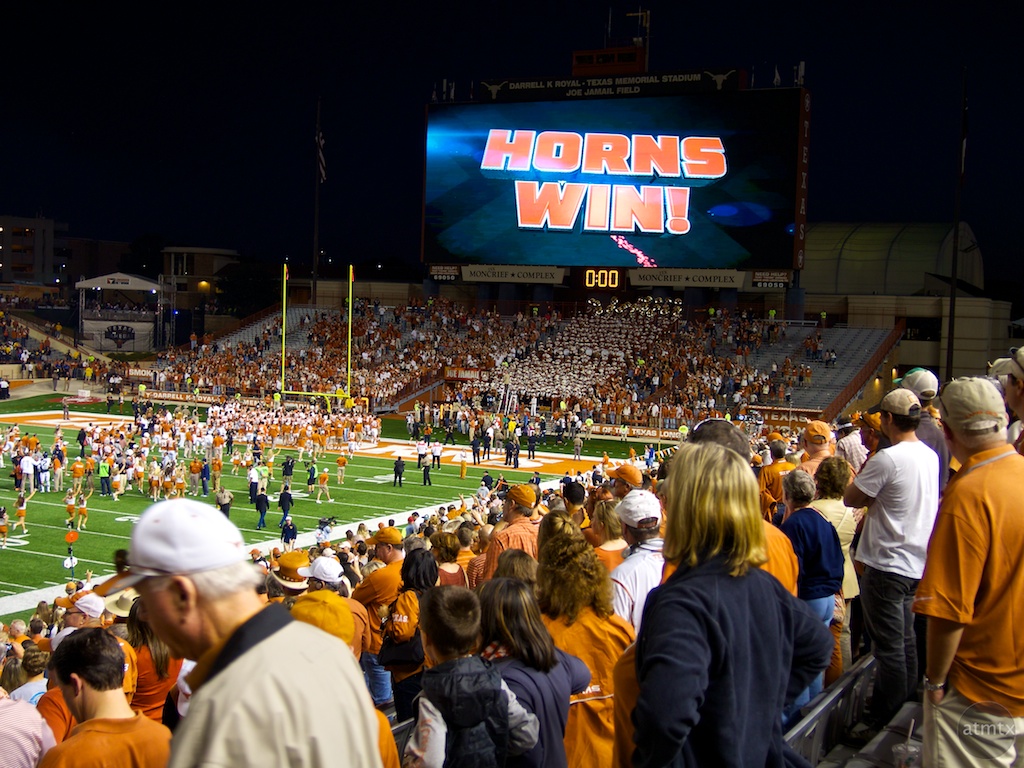 10 thoughts on “My first ever University of Texas football game”