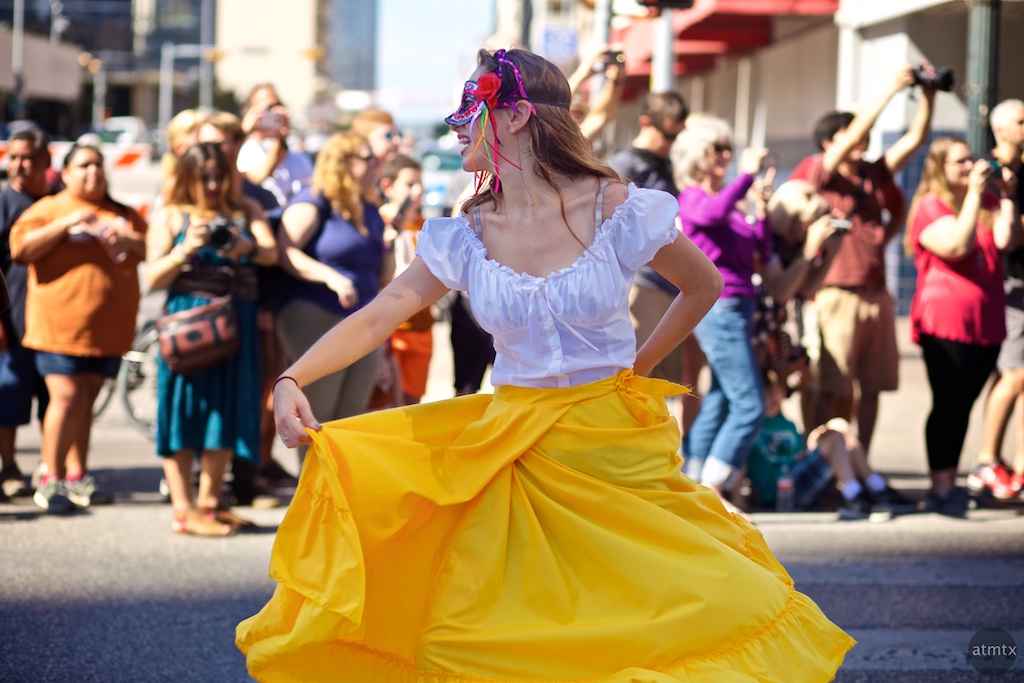 It was the annual Dia de los Muertos Parade today — the Mexican day of the dead celebration. It’s a wonderful and colorful parade and I’ve gone for a number of years. Last year, I shot it in a black and white street photography style. This year, I wanted to do something different.

I decided to go for maximum shallow depth of field, which helps to isolate a subject from the background. Especially useful during a crowded parade with lot of background clutter. My camera of choice, my long neglected, full frame Canon 6D. The larger sensor with a corresponding large aperture would give me maximum separation. I used the 85mm f1.8 lens.

I readily admit that it was slow going for a while. Any muscle memory I had for the 6D, has long dissipated and it was an effort to find the settings that I wanted. One of the downsides, for sure, of having lots of cameras. I’ve all but switched to mirrorless and smaller point and shoots and it must be more than a year and a half since I used the 6D.

I’m happy with the resulting photograph — it was the kind of image I was hoping for. But, it was a struggle to get. Beyond relearning the controls, I found that an old style optical viewfinder was like flying blind. I’ve gotten so used to shooting with an EVF that the optical was so much slower to set the proper exposure. And, I find that the Canon 6D doesn’t meter as well as my Olympus.

Half way through, I realized that the 85mm f1.8 was probably the wrong lens. Sure, it gave me maximum subject separation but it was a pain. The focusing had to be exact, because of the shallow DOF. I missed focus on a number of shots, and I didn’t find the focus speed particularly fast. Could it be that mirrorless has matched or exceeded non-sports DSLRs? Also, it was a bright day and I couldn’t shoot wide open at f1.8, either.

Perhaps next year, I’ll bring my 70-200mm f4. It should be more versatile and it gives me the subject compression that I wanted. It’s going feel heavy, however, since I’m used to my light-weight mirrorless.