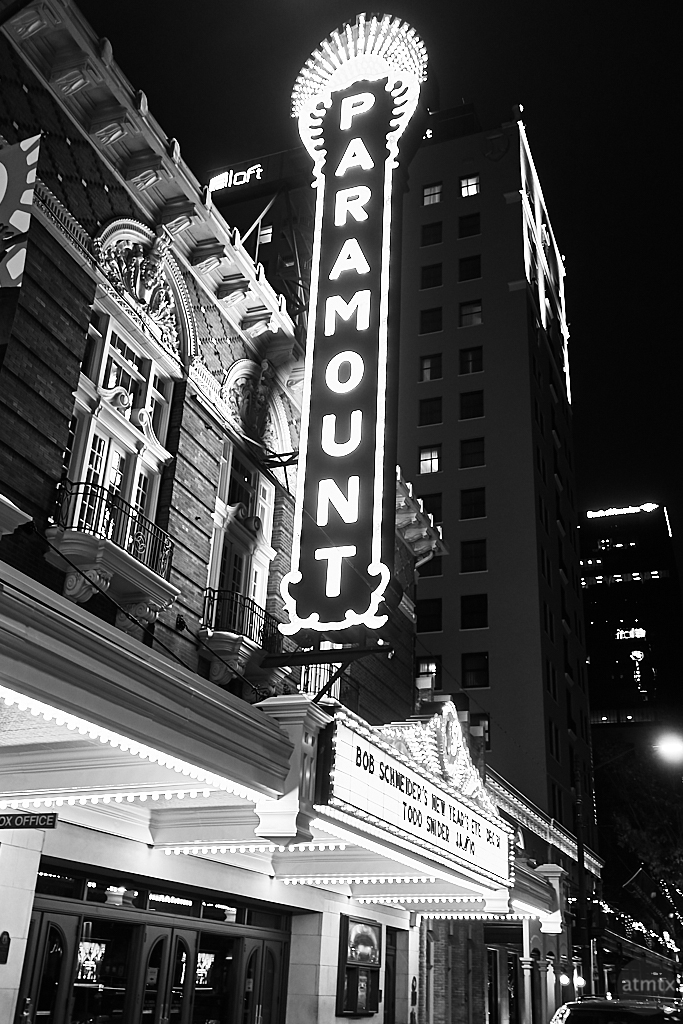 I’m not going to be at the Paramount today, for New Year’s Eve. I’ll be at home hosting our 17th annual get-together with our core group of friends. But I thought these photos I shot last week would be appropriate for today. It’s part of my on-going test of my latest camera.

I went to my usual places, along 6th Street and on Congress Avenue. Ever since the Paramount Theater restored their large blade, I’m smitten. This architectural element completes that facade and adds a touch of old-world nostalgia.

The Canon G7X Mark II with its comparably large 1 inch sensor is doing well at night, as I had hoped. I need to shoot with a slow shutter speed, however, to keep the ISO as low as possible. At the wider angles 1/10 of a second works reliably. At this 35mm equivalent, I used a f2.2 aperture at ISO 160 and I bumped the exposure compensation 1 stop to create a bold black and white.

The monochrome conversion was done in post from the RAW file. Unfortunately, the in-camera black and white is horrible. Nothing like the wonderful Olympus PEN-F or even the Pentax Q7 that I used before that. 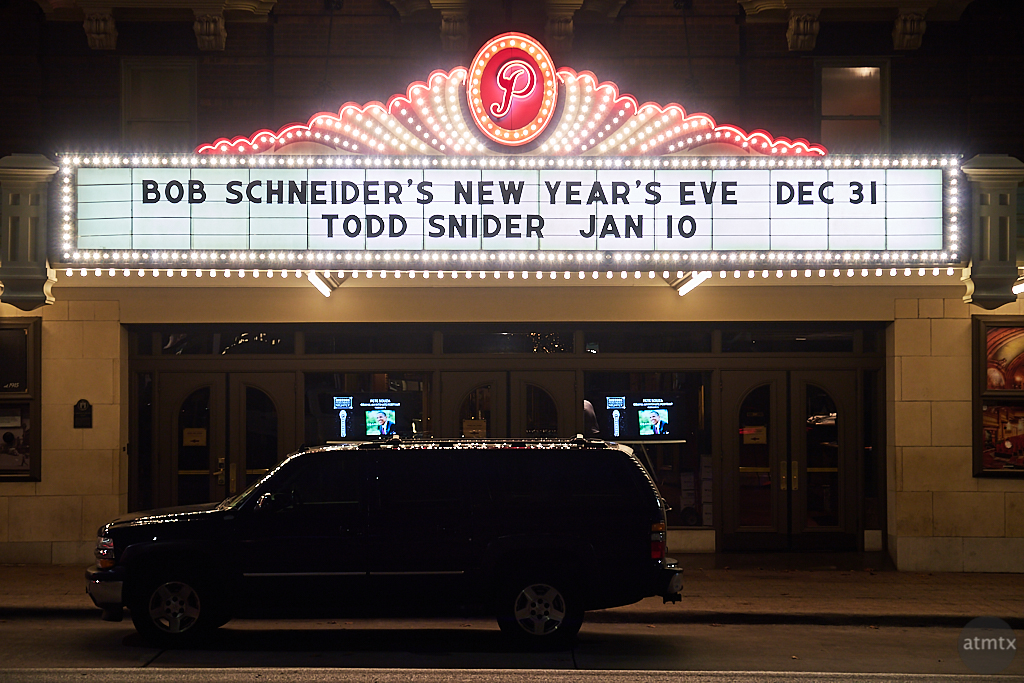 I was hoping to capture the sparkle of the marquee and an outlined silhouette of the SUV, which I think works well. I’m surprised that I shot this at a 85mm equivalent at 1/10 of a second. I found that image stabilization of the G7X Mark II is not as capable as the Olympus. Generally, longer focal lengths requires a faster shutter than I expected. I must have been extra steady for this shot.

By the way, Bob Schneider is a popular Austin based musician. Maybe a tradition in the making. I think he’s performed on New Year’s Eve at the Paramount for the last few years.

Here’s yet another taken on the Paramount, from across the street at a classic 50mm equivalent.

I know a lot of people like EVFs and they are certainly handy, if not necessary, in bright light. However, I’m really enjoying making compositions with the rear LCD. It certainly works well at night, but I found it gives me additional freedom shooting this way.

My Olympus micro 4/3 cameras have both an EVF and rear LCD but I generally use the EVF. Somehow, the larger the body, the more inclined I am to use a view finder. But the Canon G7X Mark II is small enough that I like shooting via the rear screen, smartphone style. In reality, I have no choice since this Canon doesn’t have an EVF. Even so, I think I would use the back screen as my primary, even if it had one.

That was the case with the Sony RX100 IV, when I tested it. Even though it has a popup EVF, I used the rear LCD. For me, beyond the small take-anywhere form factor, these cameras are about a free-form style. There’s a freedom that has a subtle and no so subtle influence on composition.

5 thoughts on “New Year’s Eve at the Paramount”