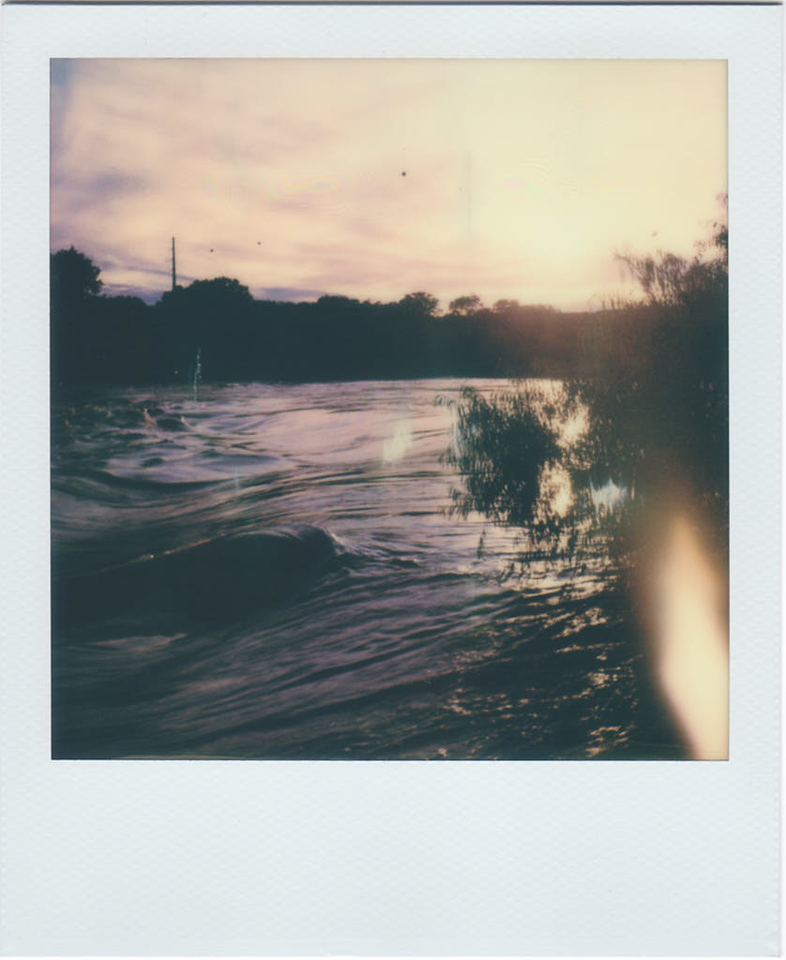 With several weeks of heavy, almost daily rain, the river and dam systems in Central Texas were stretched to the limit. There was only minor flooding in Austin, however, the silt-heavy and fast flowing river made water purification difficult. For the first time in my 27-years in Austin, we needed to boil our drinking water. Rumor is that the boiling water requirement will be finally lifted tomorrow.

I took this photo last Sunday, a week ago, the day before the water boiling notice went into effect. I was astounded by the rapid flows through our central downtown river, so much so that I decided to take a picture with the expensive Polaroid SX-70. At $2.50 a pop, I was gun-shy about shooting just anything. I had one exposure left in my pack of eight film sheets.

The image is low-fidelity by any measure, but it came out better than expected. And, the actual photo has detail, color and subtlety that does not come through in the scan. I shot directly into a hazy sun and arbitrarily bumped up the exposure compensation. The big nasty flare, scratches and light leaks all adds to the charm of this type of photography, I suppose.

Purely unplanned and not intending to do a picture comparison, I just happened to shoot roughly the same scene with my other two cameras in my possession. The Canon G7X Mark II and the 14-year-old Olympus E-300. I found the results interesting in a creative, artistic sense.

First up, the Canon G7X Mark II, the compact camera with a one inch sensor. Both photos are from a converted RAW. While they are clearly sharper and more detailed, I think they’ve lost the charm of the Polaroid instant film.

I like the black and white better, but both have sharp digital look.

This is the same photo, from the same camera in JPEG. I lightened the image slightly in post. The dynamic range is not as good and it’s less sharp. However, it looks less clinical than the RAW conversions.

This is a RAW from the Olympus E-300, post processed slightly. This 14-year-old camera has a 8MP CCD sensor, which I believe, has a different look than modern CMOS sensors. There is a softness and dare-I-say, a more organic feel. This is my favorite of the digital pictures.

Finally, on a lark, I converted the scanned SX-70 photo into black and white.

Is there anything to be learned from these comparisons, other than the fact that I’m carrying around too many weird and wonderful cameras? Sharpness and dynamic range is not always the most important considerations when making photographs. It all depends on what you are trying to do.

I suppose most product photography, for example, will not work with such a low fidelity Polaroid. And, there are many other cases when photographs need to be sharp and accurately colorful. But, not always.

Some even prefer a low-quality polaroid snap over a meticulously detailed portrait. I’m not that kind of person, but I’m starting to understand. Photographs are ultimately a pointer to a place in our memory, real or imagined. Whatever evokes the desired emotion, in the strongest way, is ultimately the best photograph.

Which means that cameras should not be judged merely by megapixels, sharpness, dynamic range or sensor size. They should be judged on how it can create the most emotion evoking images.