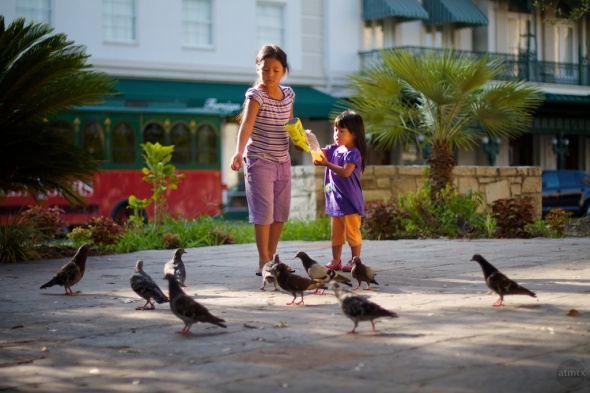 This simple photograph was probably my most challenging to take, from a photographic technique point of view, during my recent photowalk. It was taken on the Kirk Tuck anti-workshop in San Antonio. As a group of us dispersed from the Alamo to find our great urban images, I found these two kids playing in the small park right nearby. It was still early in the morning, quiet and uncrowded. The birds were exploring the plaza before the hoards of tourists arrived.

So what made this image a challenge for me? Well unlike my previous post about the challenges of asking people for permission to take their photos, this image was difficult to take because of the lighting. I did not ask the girls for their permission, in this case. I wanted to take a candid image of them playing around — not stiff or posed. The light was tough. The kids were feeding the birds in the shadows while there was strong sun that threatened to wash out the details. I took several images from another angle and LCD previews and histogram did not look promising. My main subjects, the kids, were dark while some of the surrounding area was too bright. I didn’t want to use a flash since I wanted to preserve the mood, lighting and the candid feel of this street image. I moved around to different positions to minimize the dynamic range of the image. I wanted to have the girls lit and brighter while the background receded.

Even while improving the light on the girls, I knew I would have to do a bunch of post-processing to get the photograph to match my ideas for the image. I made sure I was shooting in RAW mode to maximize my exposure latitude. Now, some of my photography friends know that I usually use JPEG for a majority of my shots and yes I do know the advantages (and disadvantages) of RAW. I’ll have to leave, for a future post, my thoughts on RAW vs. JPEG. Suffice it say that, while I don’t always use RAW, I do selectively use it and this image was a good candidate. So why use RAW for this picture? I knew that I would have to brighten the girls to have them standout in the scene. The photograph at the top of this post is my image after post-processing. The image below is what basically came out of my camera before the corrections. 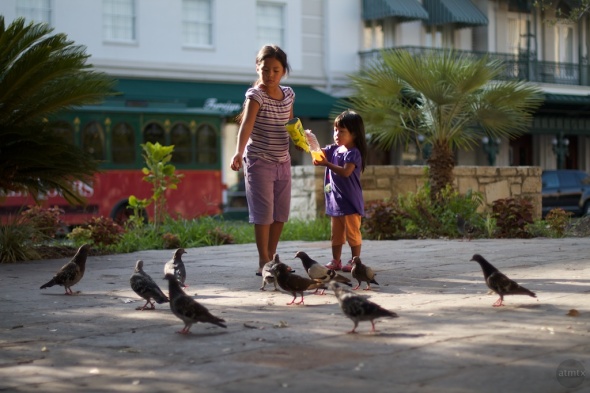 When I just started photography, I was always curious why my images looked flat and dull compared to some of the wonderful, dynamic images I found out there. I came to realize that post-processing the photograph, after its taken, is a key step. I now find it strange that some people are so intent in capturing an image SOOC (Straight Out Of the Camera). We are now in the world of digital and quick enhancements are easy with software. Even with film, the photographers burn (darken) and dodge (lighten) to change the brightness levels of a photograph. I do however believe that you should do as much as you can to get it right in camera, and only then, enhance the photograph further in post-production. Why spend a long and time-consuming processes to alter an image is post-processing, if it can be done quicker and easier at the point of capture. If this was not a street photograph but a posed image, then some external light source such as a flash or reflector can be used to add more light on the subject. Instead I had to rely on post-processing to get the look I desired.

I loved how these kids were playing around and feeding the birds. I wanted to isolate the girls as much as possible so I shot the image with a large aperture. I set my 50mm to the largest aperture of f1.4 to make the focus area as narrow as possible. You can tell that the people are in focus but the birds in the foreground and the buildings in background are out of focus. Having a shallow depth of field, like this image, helps to isolate the subject. I further enhanced this effect by brightening the girls with my Dodge brush in post-processing. I used Apple’s Aperture 3 software to do this enhancement. I also added a vignette — darkened the corners — to make the center pop some more and make the surrounding areas recede. The eye is typically drawn to the light — the brighter areas in a photograph. By making the subject brighter than the surrounding area, the eye is drawn to the girls. This is how you can direct the viewer’s eye to where you want in your photographs.

The image was taken with a Canon 7D with a 50 mm f1.4 lens as a 18MP RAW. Post processing in Apple’s Aperture 3 program included some sharpening, adding a vignette and increasing color saturation and dodging the girls to make them brighter. Added a bit more warmth by changing the white balance.

4 thoughts on “Brightening Your Subject to Direct the Eye”