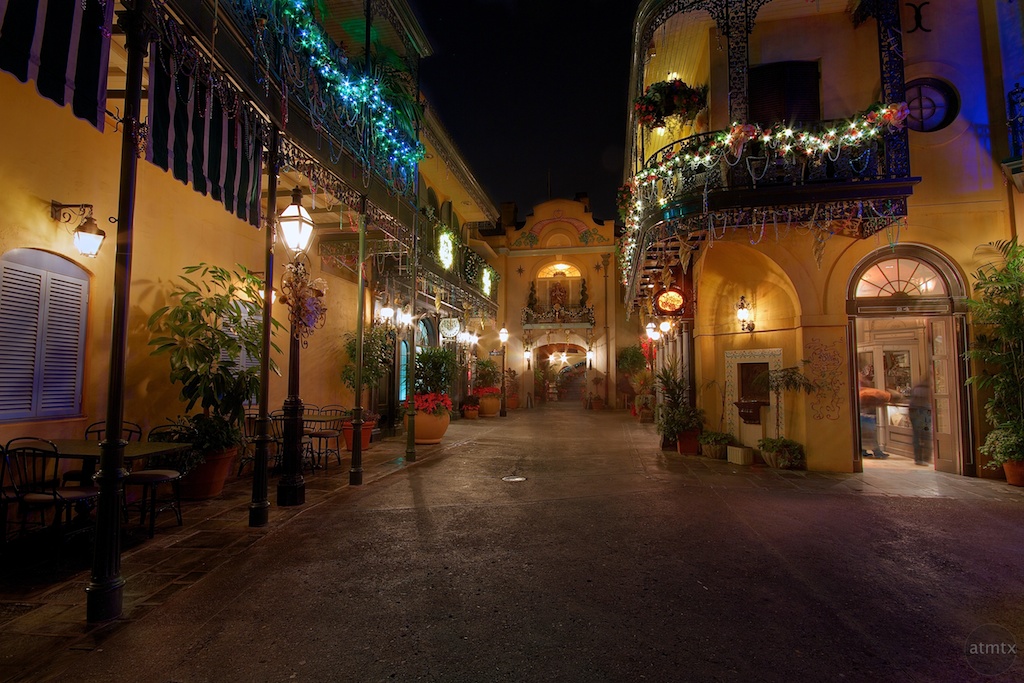 It has been a while, about 2 months, since I did a blog post related to HDR (High Dynamic Range) photography. While it’s true that I’m doing less HDR photography in general (you can see this by looking at my Flickr Photo Stream), I still create HDR photographs once in a while. In the past, I looked for opportunities to do HDR photographs, now I just use this technique when it makes sense. Why take the extra effort to do all that HDR processing and keep all those extra-large photographs, when it is not needed. That said, under the right circumstances, a nicely done HDR can have a magical effect and really bring an extra dimension to an image. My processing tends to be subtle but I believe the small details can enhance a photograph and give additional depth. I decided to apply my HDR technique to a scene I shot in New Orleans Square in Disneyland. Hopefully, you will agree that there is a different look and possibly more realism in this image.

High Dynamic Range photography is a technique where multiple images, usually a minimum of 3, are combined together in post-processing to create a photograph that appears to have more dynamic range. It is effective in scenes that have a very wide range of light levels. When light levels are varied enough that one photograph can not effectively capture the full range of dark to light in the image, HDR can be used to capture this range of light. The HDR technique will brighten dark areas and darken the bright parts to fit them into a single photograph. The risk in HDR photographs, however, is the possibility that the dynamic range is lowered too much and the image becomes too boring since the light levels become too narrow. While some people I know take anywhere from 6 – 10 images, I keep things simple and usually take only 3 photographs of a scene. My exposure range is set from -2EV to +2EV (EV=exposure value, also known as a stop) unless the scene is unusually bright or dark where I would shift the exposure range up or down 1 stop. I continue to use Photomatix for my HDR blending but Nik Software’s HDR Efex Pro is also getting popular.

I decided to include my three original exposures that I used to create the HDR above. Make sure to click on each of the photographs to see a larger version. You can see that the final image at the top of the post has brightness levels similar to my 3rd exposure below, however, it does not have the harshness in the bright areas. I believe, overall, it has the feeling of the first exposure but with enhanced detail, brightness and color. You can see the contribution of the 2nd image below by looking at the store interior on the right side. The store details are too bright and blown out in the 1st and 3rd images. I did some manual blending of the second image to get this effect. This brings up an important point about doing HDRs. For most serious HDR photographers, using Photomatix is just a first step in a several step process. Each person has a different process to create their final image but it is usually more than doing a quick image blending using some HDR software. In my case, after I create the initial HDR in Photomatix, I use Pixelmator to blend in parts of the original images into the Photomatix created HDR image. This, I believe, is part of the artistry of HDR. Each person has their typical settings in their HDR software as an initial starting point, but they can greatly augment this by their blending techniques and other post-processing software. After the layer blending in Pixelmator, I use Aperture 3 to do final sharpening, color correction, contrast and saturation changes. I’m planning to give more details about my HDR technique in a future blog post, but hopefully this will give you a quick look at what I do to create an HDR. The entire process takes about 20 minutes for me. It can take longer depending on the complexity of the image and the amount of fancy layer blending that needs to be done. The image above was straight forward and took about the average length of time. 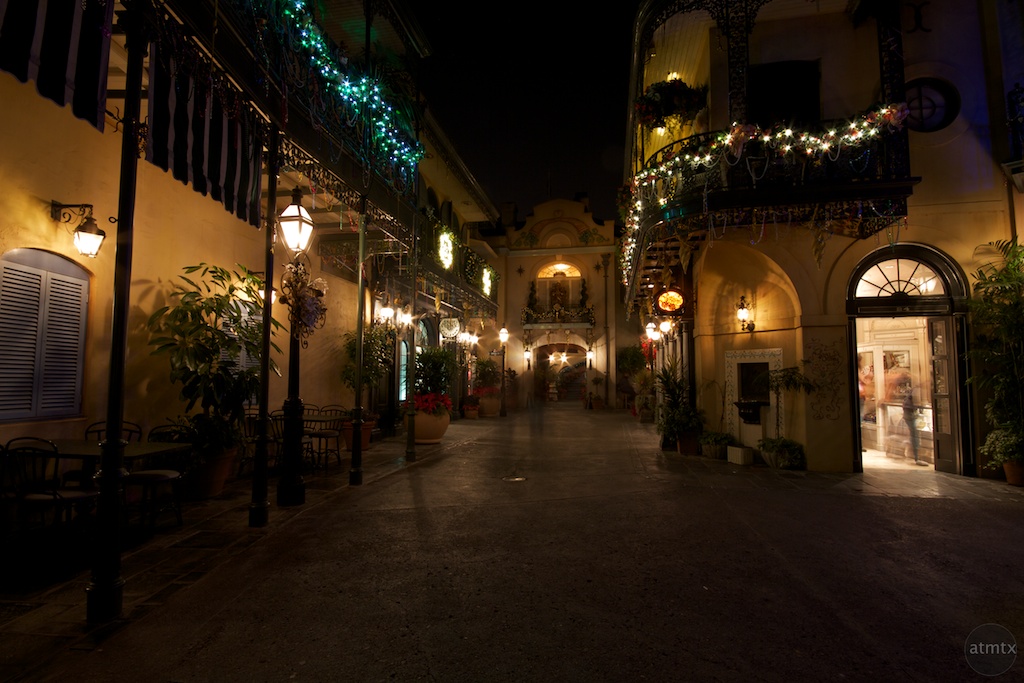 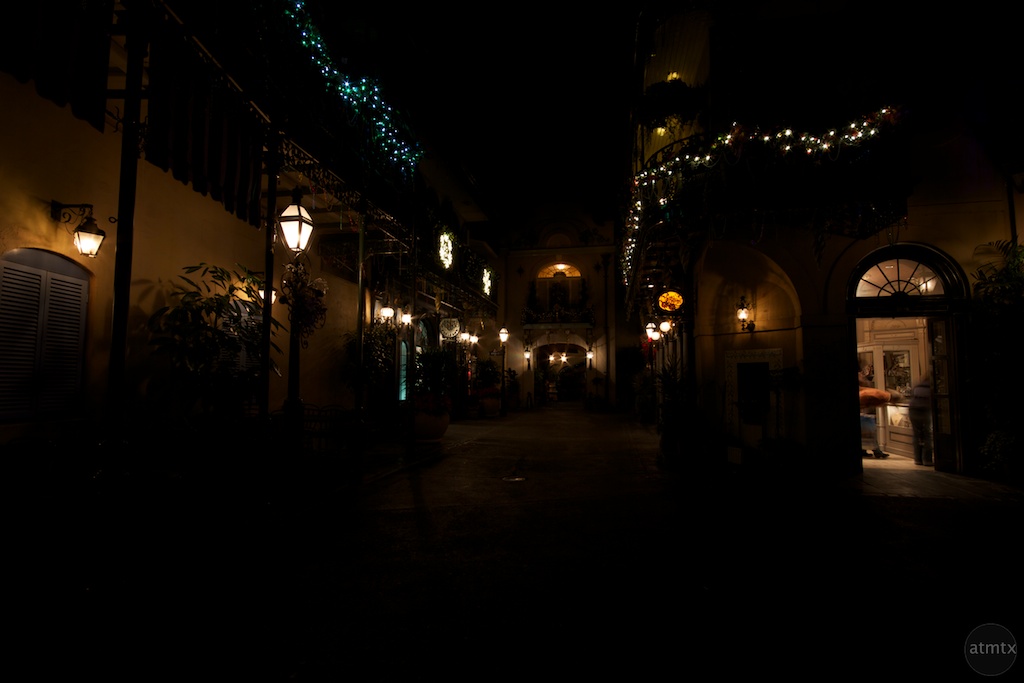 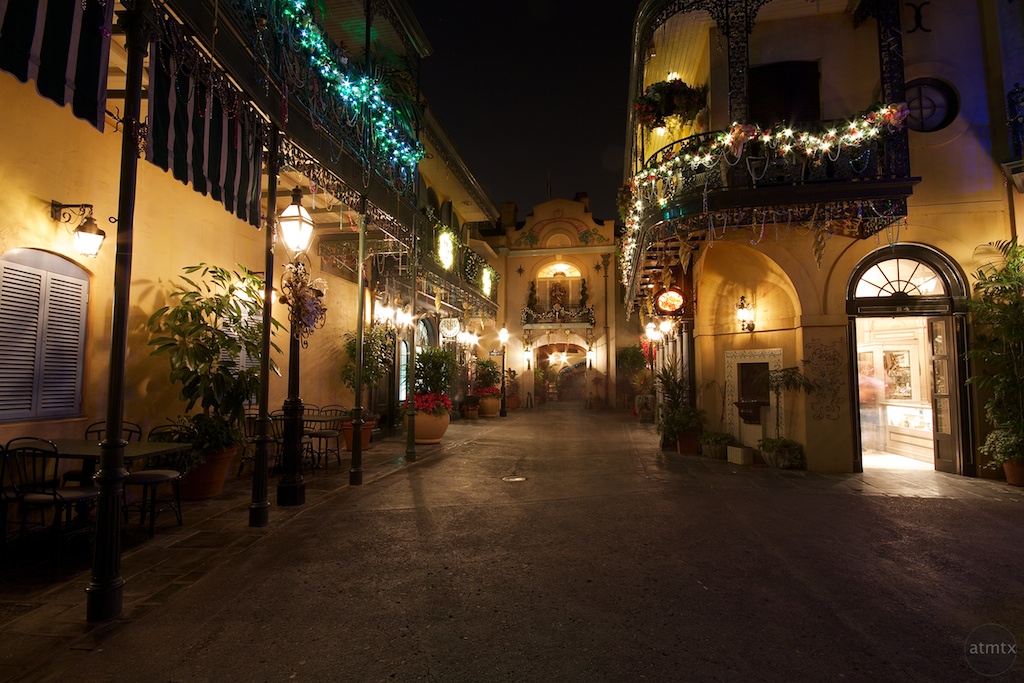 What makes a successful HDR photograph is the same as any other photograph. You have to have an interesting subject, framed well and have visual cues that will lead the eye of the viewer. HDR can enhance the look of an image but I believe this technique by itself can not change a weak photograph into a strong one.

What attracted me to this scene is the warm colors, the richly detailed architecture and the festive Christmas decorations. A slight curve of the street, the leading lines and the brightness inside the frame helps pulls the viewer into the scene. I also like that the shadows and the dark path at the front of the scene adds a bit of mystery. The HDR has nicely added details to the photographs but still maintains the contrast between light and dark. If the entire scene was the same light level, I don’t think the image would be as effective.

I originally shot this street from the other direction but I didn’t like it as much. The street did not have a focal point and the composition looked weaker. I prefer the image displayed above since there is a building at the end of the street that acts as a visual destination. The structures on the left and right roughly balance each other. A stronger foreground element might make this a better composition but having the varying light levels on the street adds a bit of interest.

The photographs were taken in RAW with the Canon 7D with the Sigma 10-20mm lens. The HDR was created using my standard processing that is describe above.