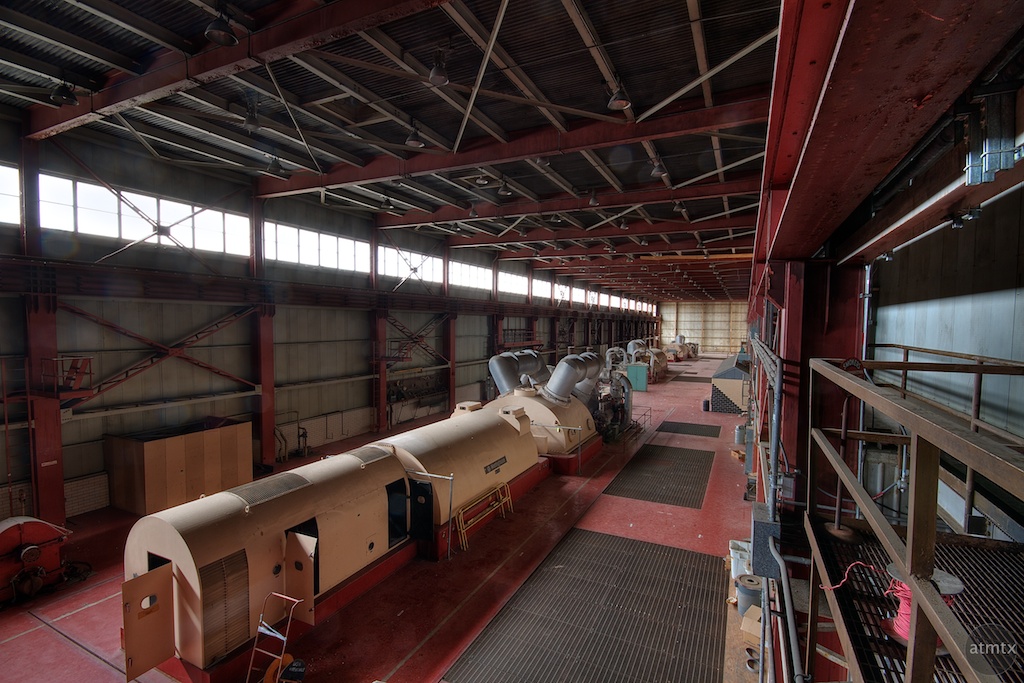 Last week, 6 photographers and I had a rare opportunity to photograph the Holly Street Power Plant. My friend Michael Connell organized this photo opportunity with Austin Energy after an incident that he details here on his blog. The 570 megawatt Plant is located in a residential neighborhood in the east side of town, close to the downtown central business district. It has been operational since the 1960s, primarily using natural gas, and was a significant power source for Austin. Years of controversy and neighborhood opposition finally closed down the plant in 2007 and it is slated for demolition sometime this year. Notwithstanding its tumultuous history, I felt that this was a chance to document a major facility before it is torn down. I’m not a photojournalist, per say, but I felt a bit like one as I spent 2 hours capturing images from both the inside and outside of the facility. Two representatives from Austin Energy, Carlos Cordova and Bobby Gosey were gracious hosts and tour guides. They gave us the history and ins and out of the place and more importantly they were there to keep us safe. Ironically, there is no longer any power at the power plant. There was no electricity to for the lights so all the photographs you see on this post were taken in natural light.

We started our tour in the main generator room. This is the largest and most impressive room and I spend a good part of my time documenting this area. The group split up and while some climbed the exterior catwalks to the top levels of the plant, I decided to stay lower down. I photographed parts of the catwalks and stairs in the exterior skeleton but my interest in architecture pulled me back to the central core. Also, I don’t mind a bit of hight but I definitely did not feel comfortable climbing higher, to the top. With only a hand full of photographers in such as large facility, I felt like, at times, I had the place to myself. There was enough things to see that everyone appeared to focus on their own interest in photography. Some liked closeups of old dials and gauges, others like the rusted pipes and distortion. I had my super-wide lens and wanted to mainly capture the sweeping grandness of the place. There was a zen like silence and stillness to the once noisy plant. Combined with 5 years of dust, dirt and bird droppings, the place was a strange combination of the industrial and urban decay. My goal was the capture the enormity of the place, the neat industrial lines and the stillness that now permeates this once bustling place.

HDR (High Dynamic Range) photography was perfect for the Holly Power Plant and 5 of the 7 photographers on this tour are HDR aficionados. Without any electricity and man-made lighting, it was very dark in places. Long exposures on tripods along with multiple exposures works well for these situations. With HDR, the photographer captures 3 or more images at varying exposures and latter blends these images together with software. It does a great job capturing the range of light that is just not possible with standard photography. HDR also enhances textures so that dust and rust of the plant is accentuated and works well with feel of urban decay. So with tripod in hand, we set out to record bits of the old Holly Power Plant. What you see on this post is my look at this place. I will also add links at the bottom to the other photographers that were part of this most unusual photowalk.

It’s clear that after working 27 years at the Holly Street Plant, Bobby has mixed emotions. I hope these photographs will serve as a reminder of the place he knows well and will disappear in the not to distant future. My thanks to MIke for arranging this event and to the representatives of Austin Energy, Carlos and Bobby in particular, who were both friendly and professional. I feel honored and lucky to be able to preserve a slice of history.

Click here to see all my images from the Holly Street Power Plant. You can also click on each of the photos to see a larger version. 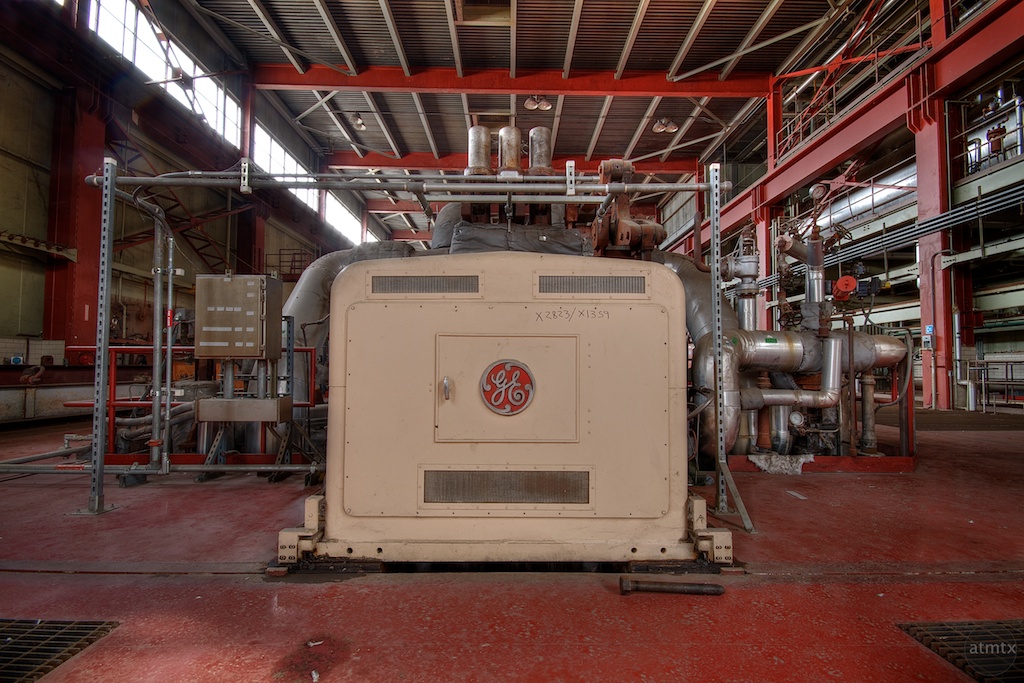 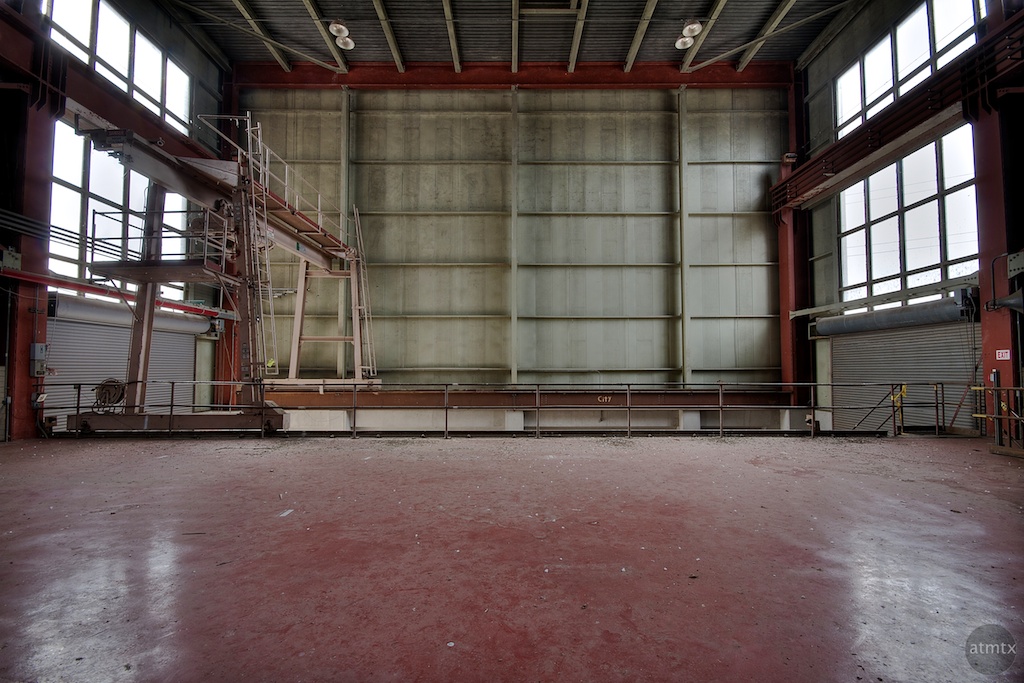 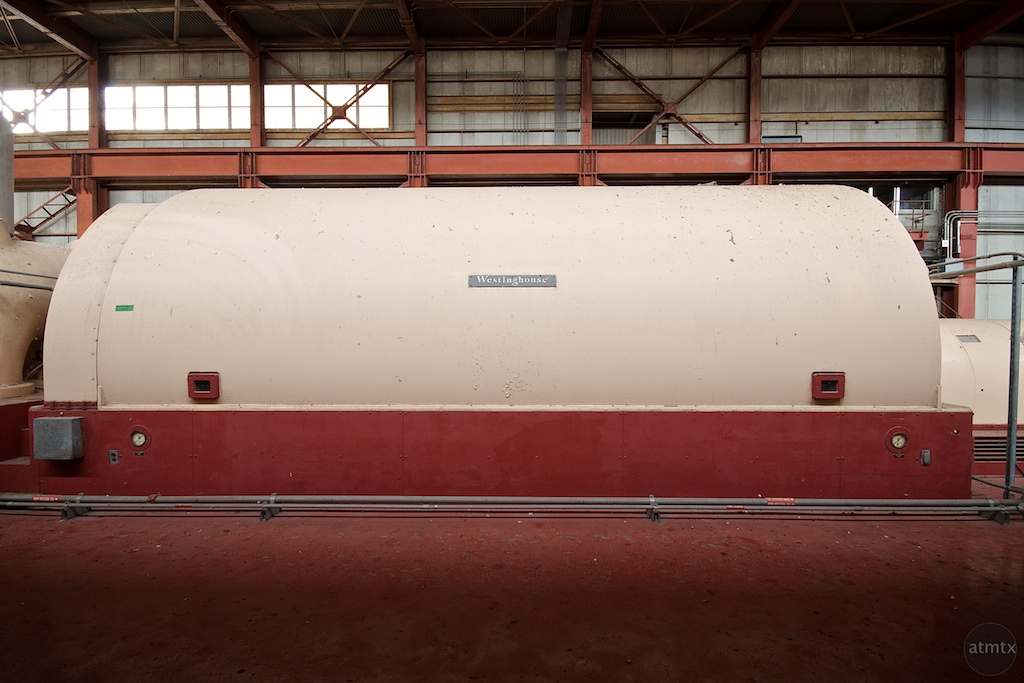 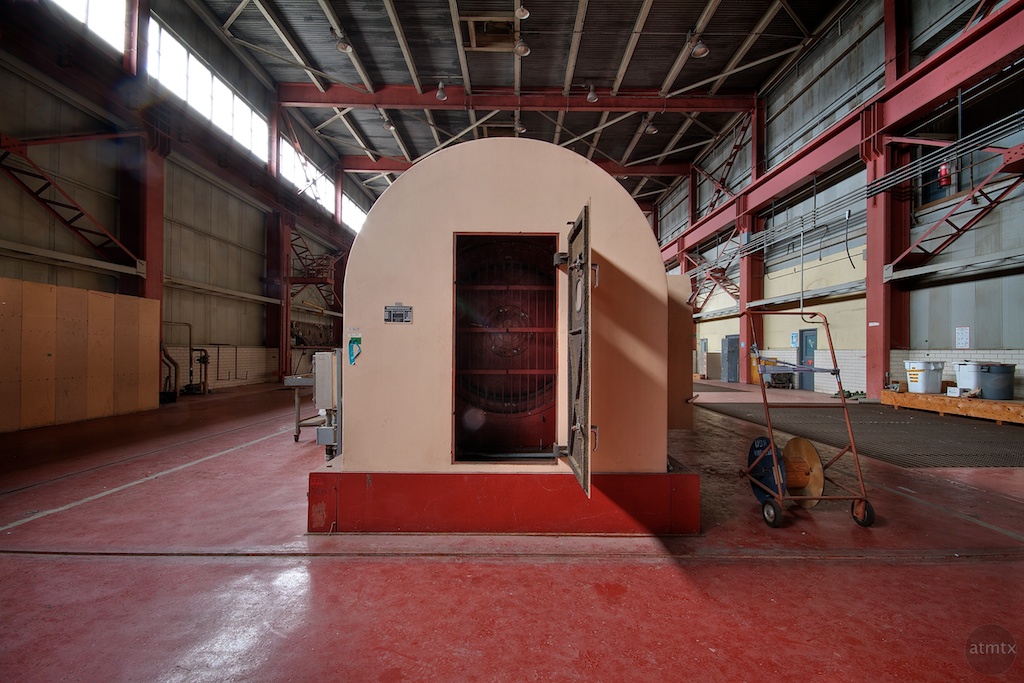 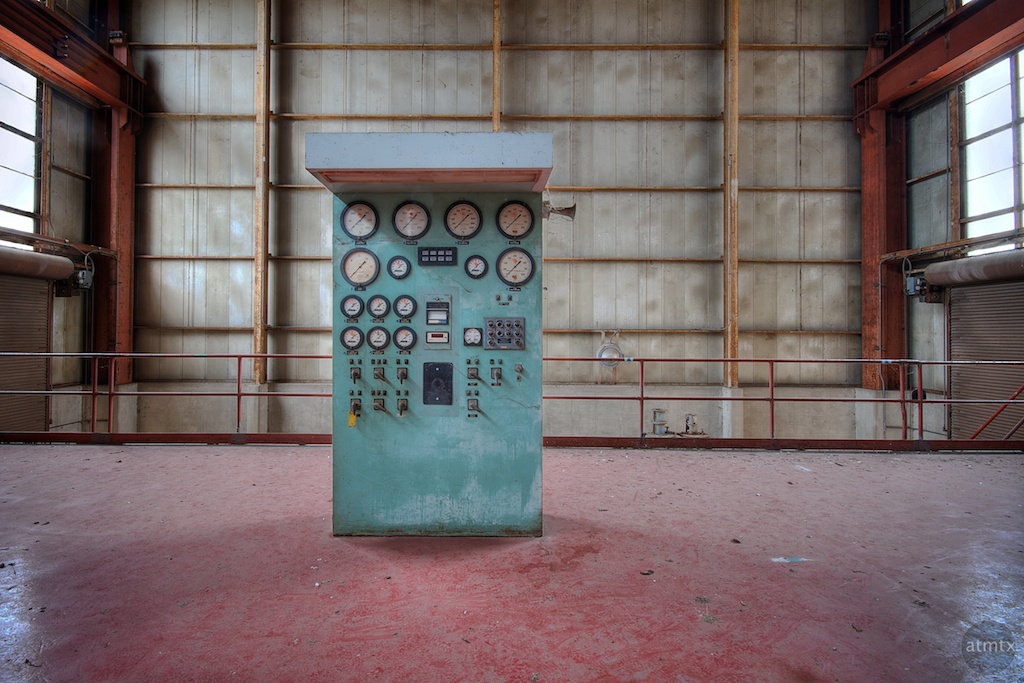 I started out photographing the main generator room. The photo as the top of the blog gives you an idea of the size of the place. The next 5 photos above are my attempts to capture the bits of the room that I found interesting. The supports on the walls and ceilings created great lines that, I thinks works well with the photographs. After my first pass in this room, I climb the stairs to the second level where the control room is located. The first photo in this post is the view from right outside the control room.

The control room was extremely dark. All of the light you see came from the band of windows that you see in the photograph. I mentioned to a fellow photographer that this room and the entire facility itself looks one of those old abandoned Soviet era installations. It’s probably the closest I’ll ever get to an old soviet style industrial complex. 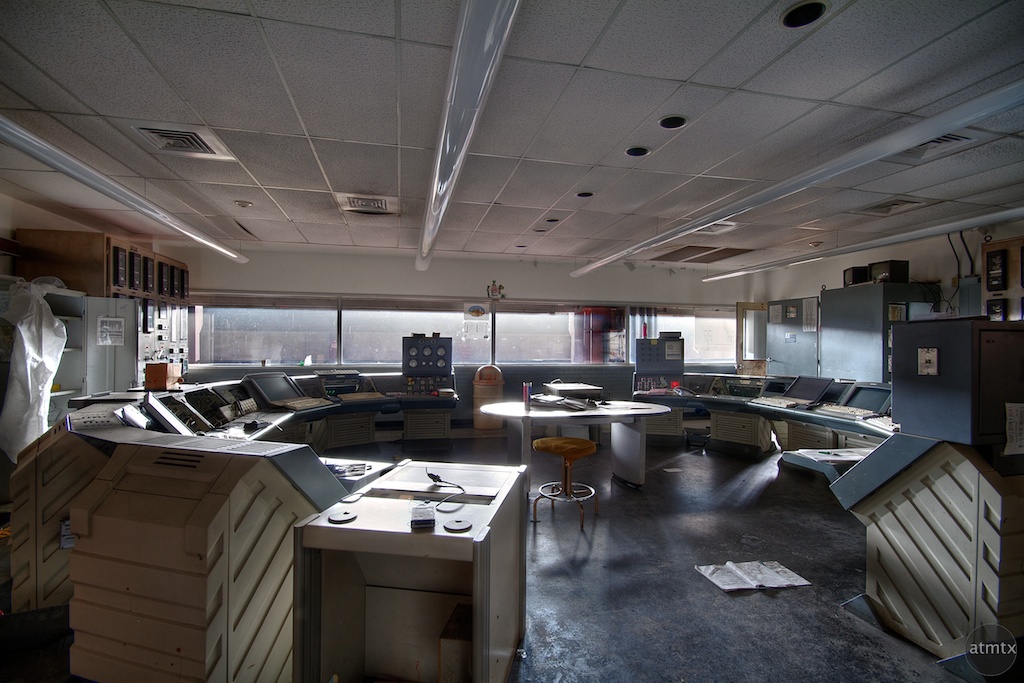 Exit a side door from the control room and you are outside in the superstructure of the plant. The next 3 photos are from this area. There are series of metal catwalks, stairs and an incredible array of valves, pipes and odd technical looking structures. I shot this level and went up another level. This area is probably about 40 or so feet from the ground. The exterior structure went considerably higher and Bobby enthusiastically leading a group of photographer up higher. Not being a fan of heights with open metal catwalks in particular, I decided to stay a bit longer in this area before returning inside.

I took a bunch more photographs of this place and may post more of them in a future, in a part 2. 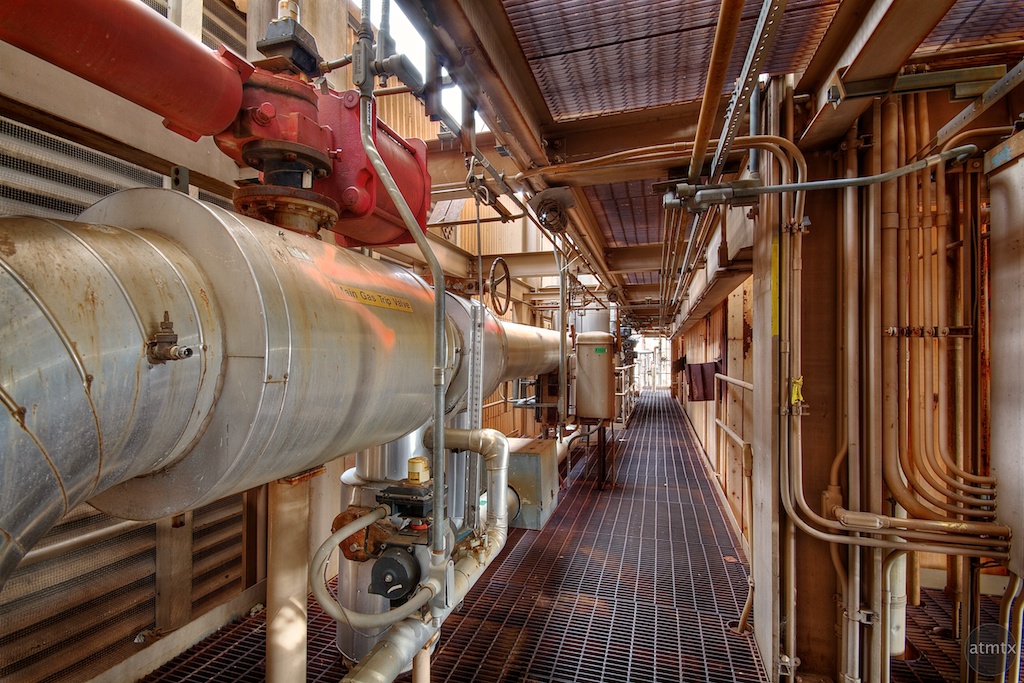 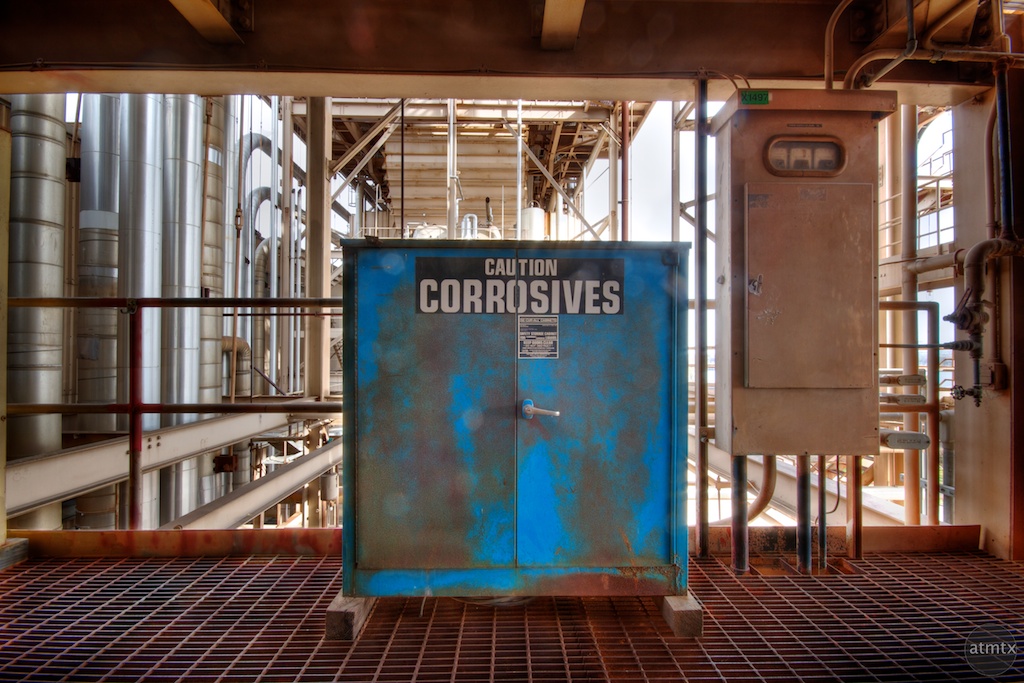 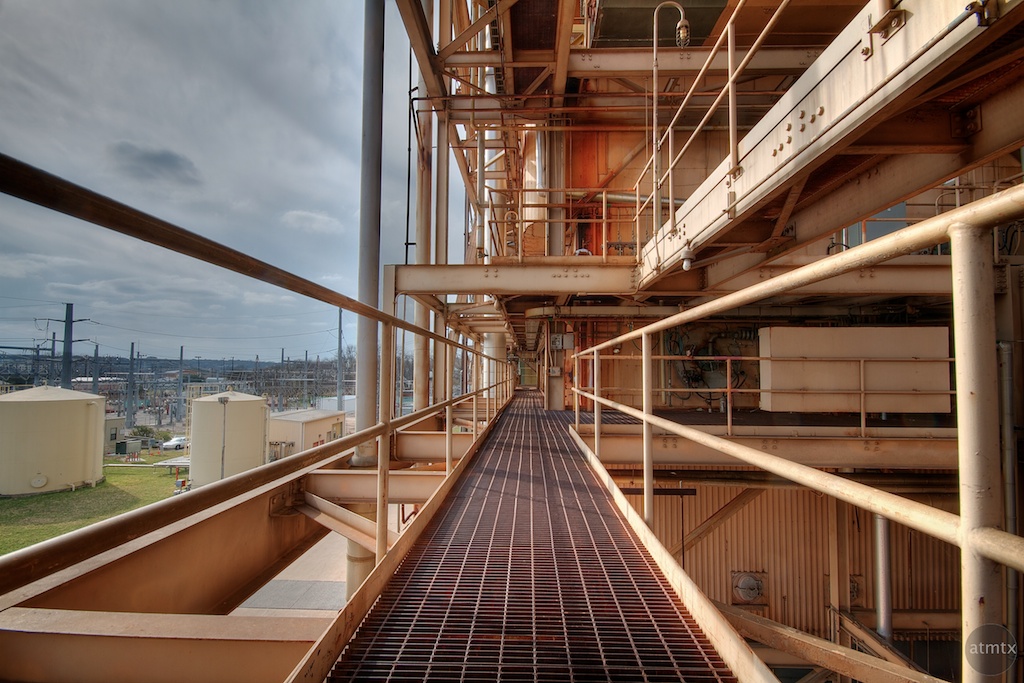 Image 1: I wanted to capture a bird’s eye view of the entire generator room. This is about 2/3 the length of the room and was take just out side the control room on the second level catwalk.

Images 2 – 6: All of the scenes were taken in the generator room. In my intro, I mentioned how quiet the place was. The zen stillness put me in a mood to create simple images of this room. A lone control panel, A generator with an open door and a large blank wall. The HDR help me to capture the details and control the light in this enormous room. I really liked the leading lines created by the ceiling beams. I think they add lots of texture and interest to the photos.

Image 7: The control room was the most challenging to take. The room was extremely dark — much darker that the image would suggest. The only source of light were the front windows. I did a three exposure HDR but even at 30 seconds the image still came out dark. I did a 4th exposure in bulb mode where I kept the shutter open for 84 seconds. I later used this bulb exposure as part of the HDR. There is a bit of a ghostly feel to the room with the interesting light. Overall, I’m happy with the way this long exposure HDR came out.

Image 8 – 10 : I generally tend to do mildly processed HDRs but I do make exceptions based on the subject. These 3 photos were processed more aggressively than usual to emphasize the texture. The outside catwalk area was full of rusty old structures and shiny pipes. I knew HDR would make the old things look older and the shiny things look shinier. I think the HDR adds more of the industrial feel to these images. The last image, “Catwalk”, was an experiment where I used 6 photographs to create the HDR instead of my usual 3. I’m not sure if it helped but using additional images in a HDR at times makes the blending easier. These situations with pipes and background sky is always a challenge for HDR processing. Halos or bright areas around the structures near the clouds often results when creating HDRs. I did my best to get ride of these effects and I’m mostly satisfied with the results.

[Note: Make sure to click on the images for a larger version]

I took these photographs with the Canon 7D in RAW with the Sigma 10-20mm lens. The camera was used on a tripod for maximum stability and ease of HDR processing. I used Photomatix for HDR creation, Pixelmator for layer blending and Aperture 3 for finally sharpening, vignetting and burning and dodging effects.

Photographs from my Photowalk mates

Here are some photographs taken by the other photographers that were part of this Holly Power Plant photo event.

Van Sutherland Image 1 and image 2 from Exile Imaging. Van and I shot the control room at the same time. I love how two people can take almost an identical view of the same place and end up with two very different photographs. There is so much creativity and style differences with HDR processing. Compare Van’s processing with mine. Some people believe that there is only one kind of HDR processing. Obviously this is not true.

Here is Alex Suarez’s blog post with photographs from the event. Alex while knowledgeable in HDR, generally does not use the technique too often. Looks like he made an exception.

And Finally –tradewinds•> image 1 and image 2 on Flickr. As you can tell Tony has a very different style and does not do any HDR photography.

10 thoughts on “Photo Memories of the Holly Street Power Plant”