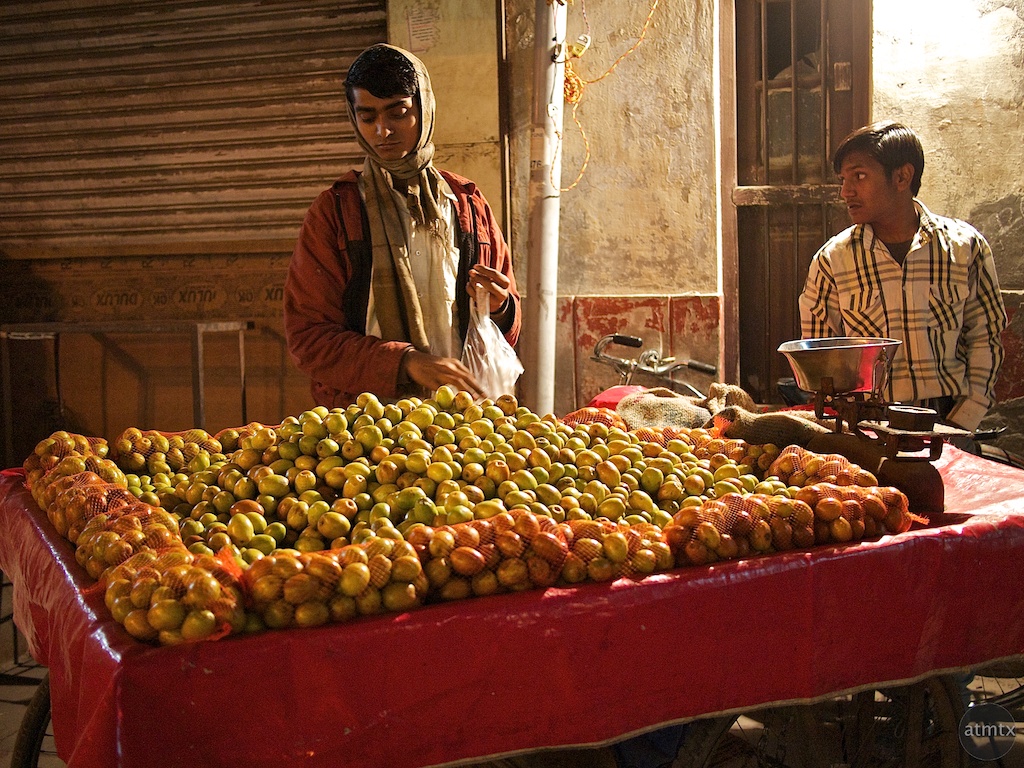 When we last left the story, I just arrived in New Delhi and got bombarded with my first visual taste of India. I was zipping along in the back of a Tata automobile driven by Mr. Kumar. I was frantically shooting street scenes from the back of the moving vehicle and I arrived safely at my hotel after a short stop at the India Gate. I mentioned previously that I hired a driver for my short stay in the Delhi area. I went through a company called Indian Panorama who arranged everything for me. The transportation between all the places I wanted to visit, a private driver and tour guide to pick me up and drop me off at the right places and even my hotel in New Delhi were all arranged by the tour company. They did a great job and I highly recommend them.

For the hotel in Delhi I requested Indian Panorama to find me a 3 – 3 1/2 star hotel in a safe but interesting neighborhood. I told them that I wanted to be near a market place where I would be safe shooting photographs at night. They found the Florence Inn in the Karol Bagh section of New Delhi. After checking in, I quickly organized my photo gear for some street shooting. I had to get up early the next day so I wanted to shoot for only an hour or so and get to bed by around 10pm. I headed out the door by myself for some night-time street photography. 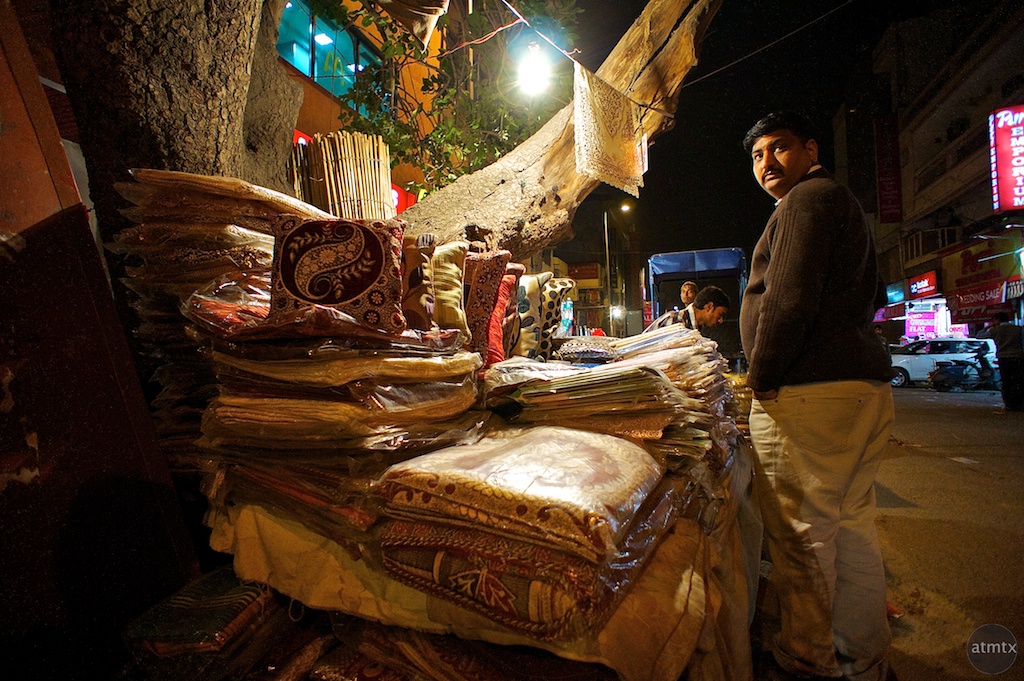 The neighborhood was surrounded by modest but clean-looking hotels. About a block away, there was a lively area of shops with many people on the street. The streets were dirty, broken down and generally a mess but the area didn’t seem dangerous. There was nothing I encountered that made me worry about my safety. At least at 8pm – 9pm, the streets were full of people of all ages, shopping, eating and having a good time.

It seemed exactly like the place I wanted to street shoot. A dense mix of interesting places and people and with sufficient grit to make me realize this is unlike any place I’ve been before. Everywhere, people seem to be shopping, picking up the daily necessities both from stores as well as street vendors. This was not a typical tourist area catering to foreigners, there were no high-end luxury goods here. Just the stuff that the average Indian would need on a daily basis. 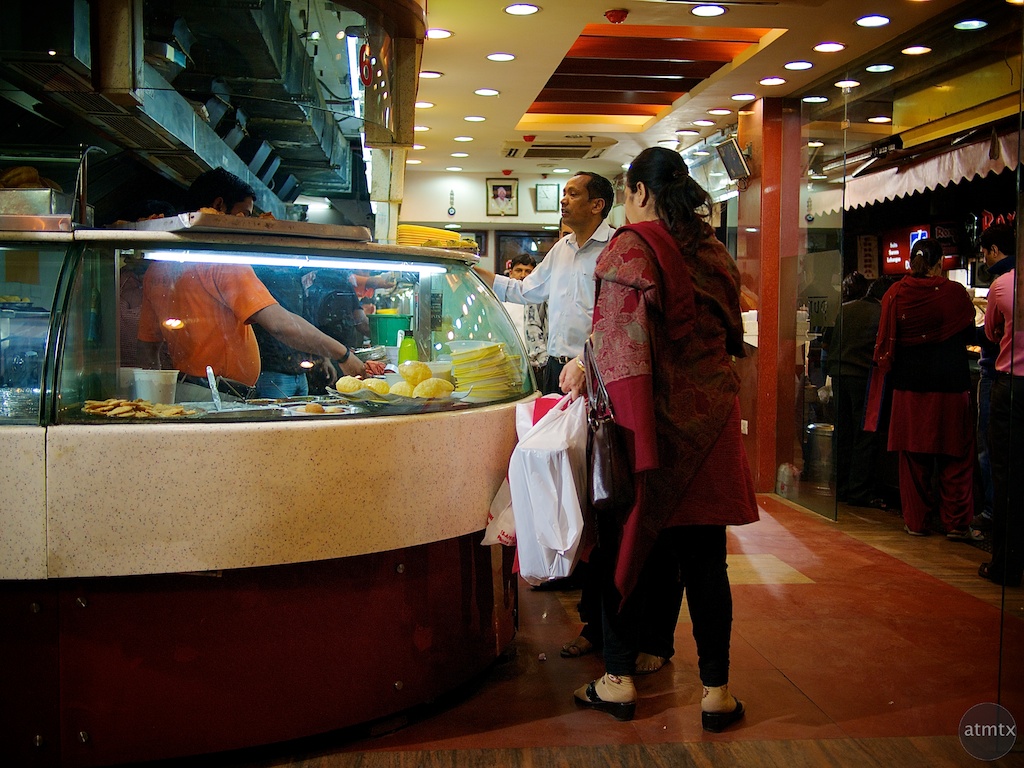 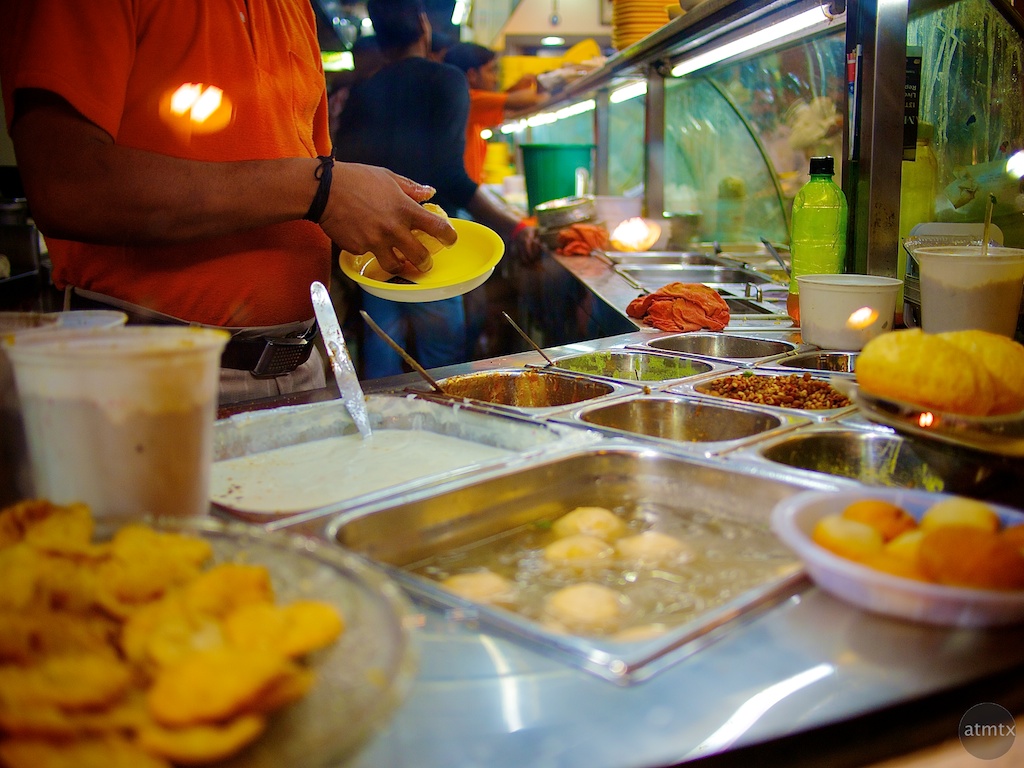 Wedged in between stores, I saw Hindu temples and places that sold flower garlands. There were slightly nicer stores right next to stalls that sold shoes and everywhere there were vendors that setup temporary displays on the street. I even saw a McDonald’s amidst the local shops. It seems like capitalism was alive and well in India and everyone had their little niche to make some money and survive.

The street life was lively with an inexhaustible supply of people walking around. The density of people was similar to what I see on 6th street in Austin during the weekend party scene but here in Karol Bagh, the people were not partying or being rowdy. They were just going about their business as a small group of tourist wandered among them.

The cars, motorcycles, 3 wheeled Autos, bicycles and pushcarts all slowly weaved between the people walking on the street. At first It seemed overly chaotic but it didn’t take long before I mostly ignored the traffic and shot the world around me. I’m not sure how someone from a small town in the U.S. will react to all this. A lot earlier in my life, I grew up in some large cities on the East Coast so I’m somewhat used to the crowds, though the dynamic here is certainly different from, say New York City. 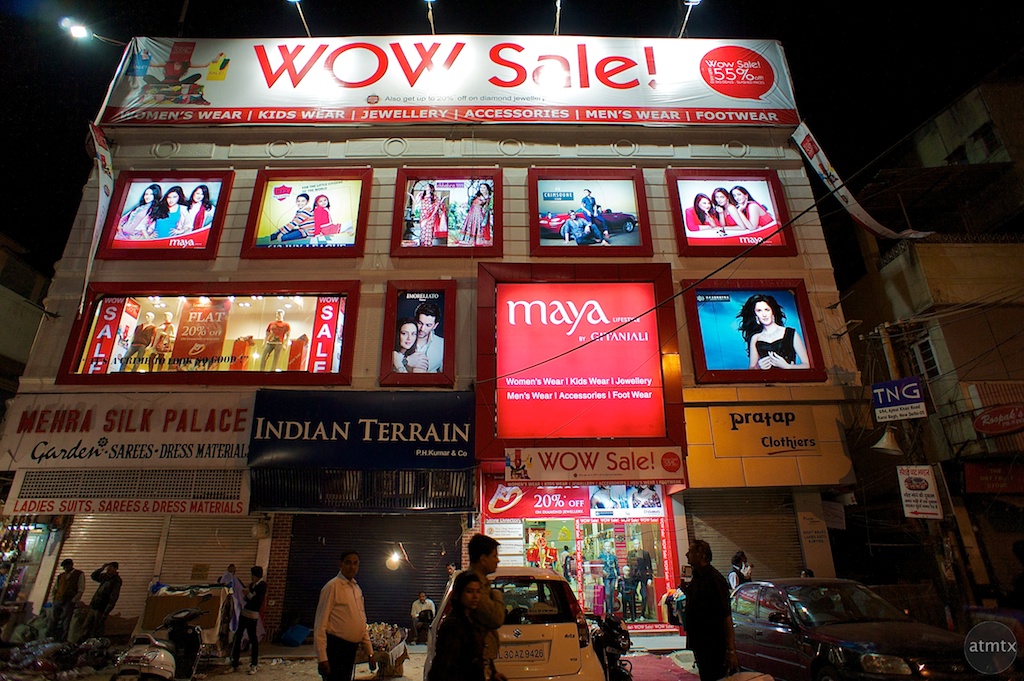 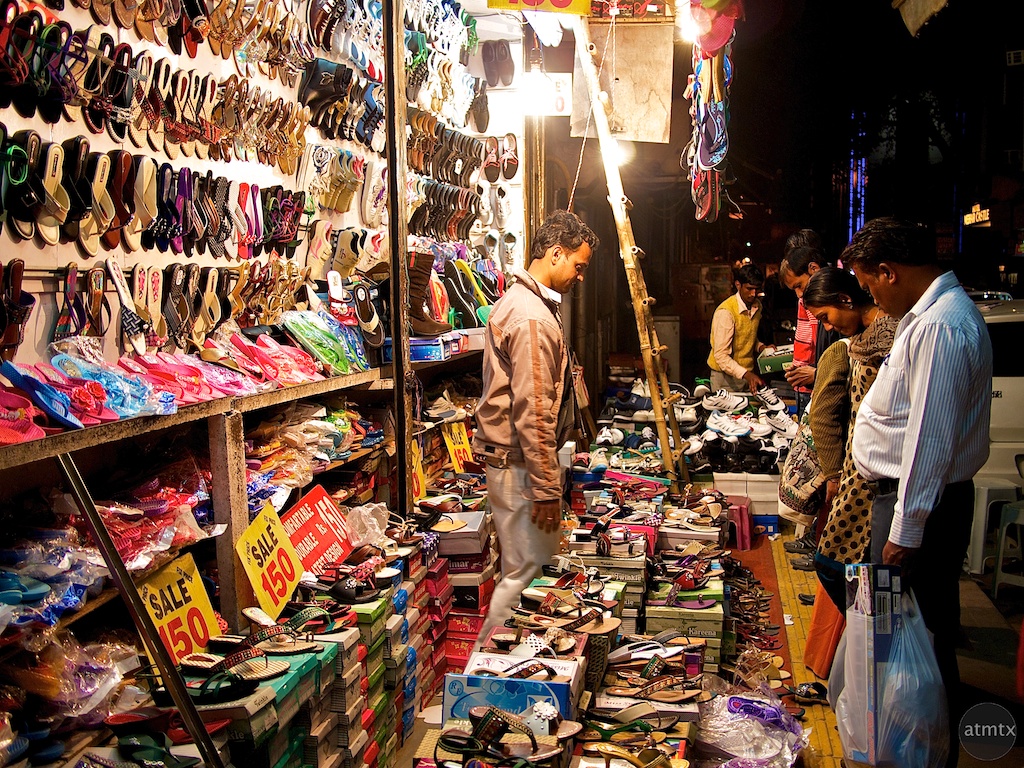 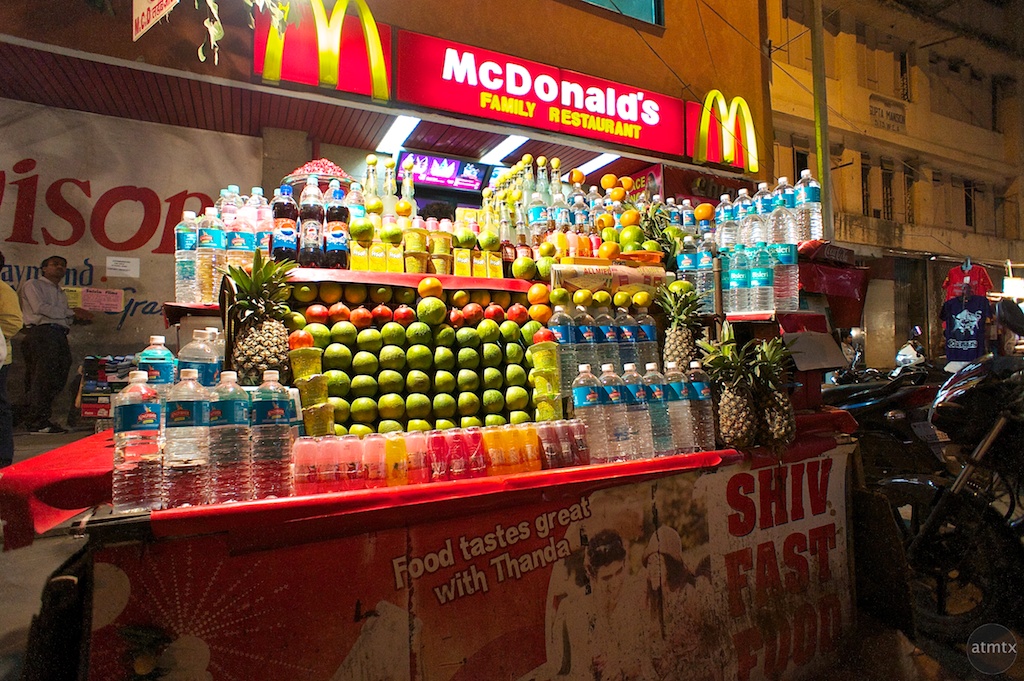 I must have walked 5 or 6 blocks from my hotel when I decided to head back. I didn’t want to risk getting lost and besides I needed to get to bed early for the big day of sightseeing. It didn’t take me too long to get a feel for the place but there were things that were certainly different from other places that I have visited. This is the first time I’m in a developing country so I don’t have a lot of context.

I don’t know if other developing countries have similar characteristics. While I can understand that there are a lot of litter on the street, I was fascinated by, what appeared to me as, random piles of dirt. They look like piles of dirt you seen around construction sites but I saw these in places where I saw no signs of construction. I also saw a lot of stray, skinny dogs but I don’t recall seeing any cats.

I’m sure it is no surprise that there is still a lot of poverty in India. I don’t recall many people asking me for money that night in Karol Bagh. Maybe I turned on my dispassionate New Yorker mode and chose not to see it. Or maybe my purposeful street shooting kept them at bay. There was one situation that I do recall that took me by surprise. Off near the side of the road there was an old, skinny lady, crouched down. The street scape was dark enough that she nearly blended into the background and I almost stumbled over her. I decided not to take her picture since I felt self-conscious of shooting people who are down on their luck. I also didn’t want to give a distorted view of the place since she seemed like the exception.

This shopping district was dirty and chaotic by Western standards but it was far from squalid. There was a vibrant energy and I hope it comes though in my street photographs. I felt a bit of regret for not giving the old lady any money. But I console myself that I really didn’t have any spare change with me. As you may recall from the previous India entry that I didn’t bring much cash with me on this trip. Yeah, it is a lame excuse but it is the only excuse that can justify my actions. There are certainly homeless people in Austin and the rest of the United States. And I usually do not give them handouts either. But somehow, this felt different. The lady was so tiny, forgotten in the corner of this busy street. She was not even actively looking for any help. 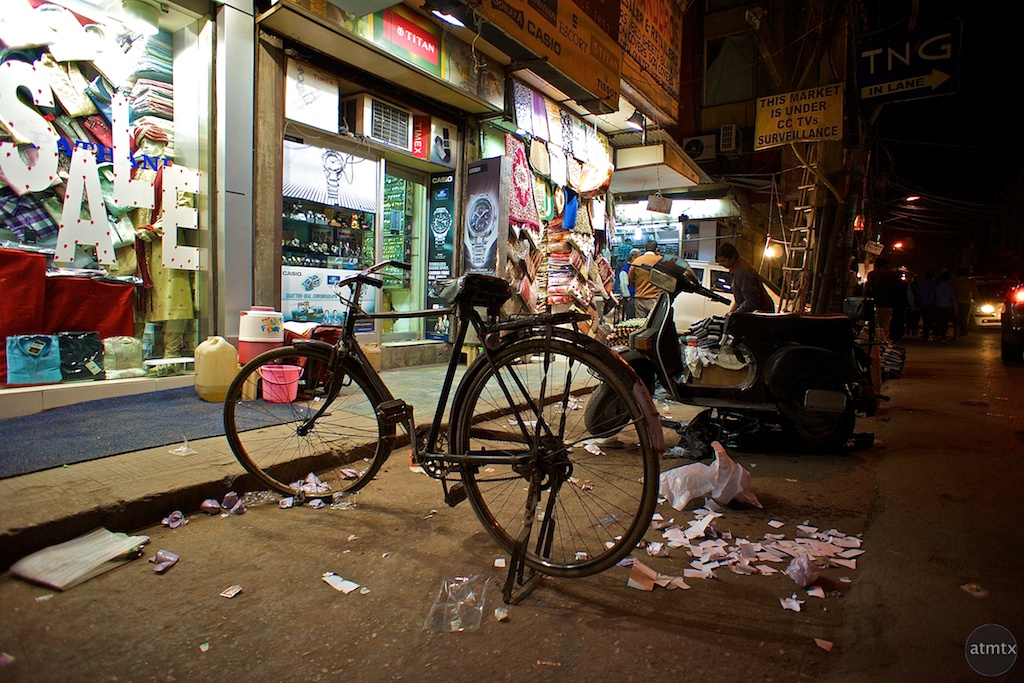 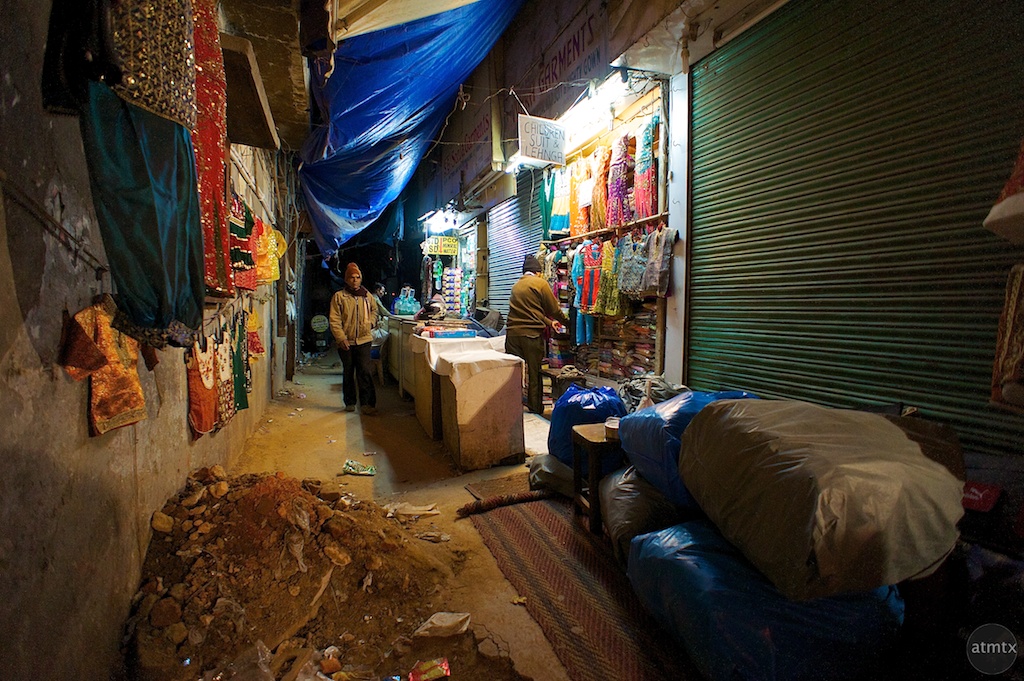 It was a short street photography session but I feel like I captured that flavor of the area, But this was merely a warmup. Tomorrow was my first full day of touring and I was heading out of the city by train. The driver was coming to pick me up at the hotel at 5:30 so I needed to get to bed. And as you will find out in the next installment, there were some unplanned situations at the hotel before the night was out. 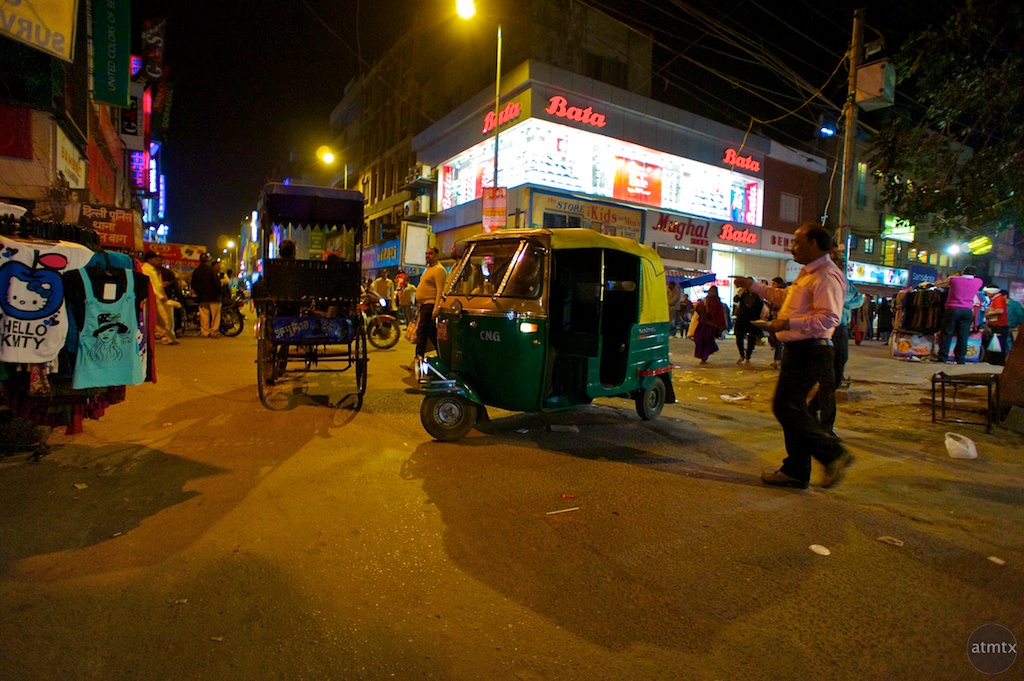 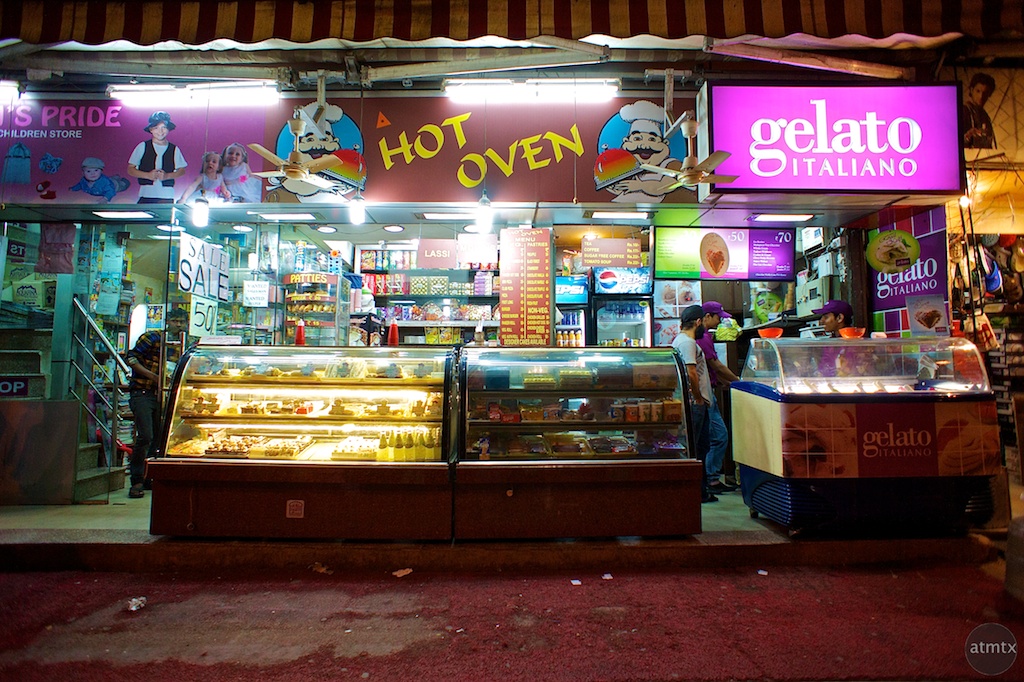 This post is part 4 of my travels to India and Singapore, Start from the beginning at, Quite possibly a trip of a lifetime and part 3, New Delhi, India: tired, excited and ready to shoot. Continue the story with part 5, The train to Agra, India – comfort, beauty and poverty.

I took these photographys with my Olympus E-PL1 with the Panasonic Lumix 20mm f1.7 and my Sony NEX-5 with the wide-angle adapter. Please make sure to click on a photograph to see a larger image and hover over the photo to see the exposure details.