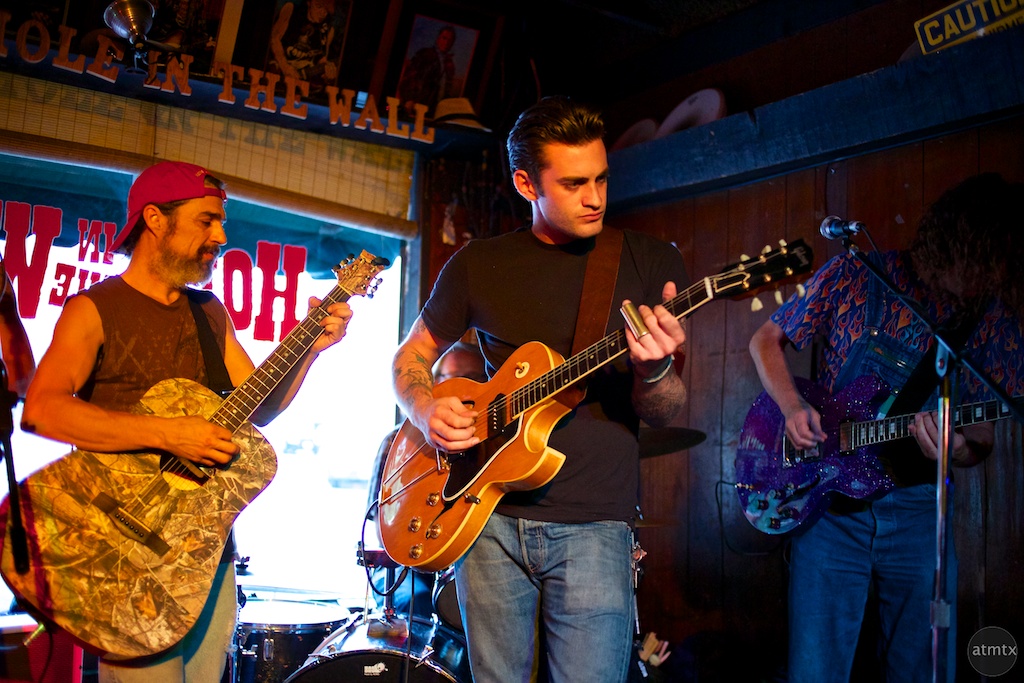 Yesterday I posted one of my favorite high ISO photos. I took it in a dive bar next to the University of Texas campus. The bar, aptly named Hole in the Wall, is a nasty place to shoot bands. Dim lighting with a bright picture window as the background, makes it suboptimal. But I was up to the challenge when Mike invited me.

The bar itself is fantastic, especially if photography isn’t your purpose. It has the broken down and worn look that oozes character. These venues aren’t unusual in Austin but not common within the ubiquitous American suburban sprawl. As I’ve gotten into photography, I seek these places out. The newer developments typically don’t have the details that make an interesting photograph. 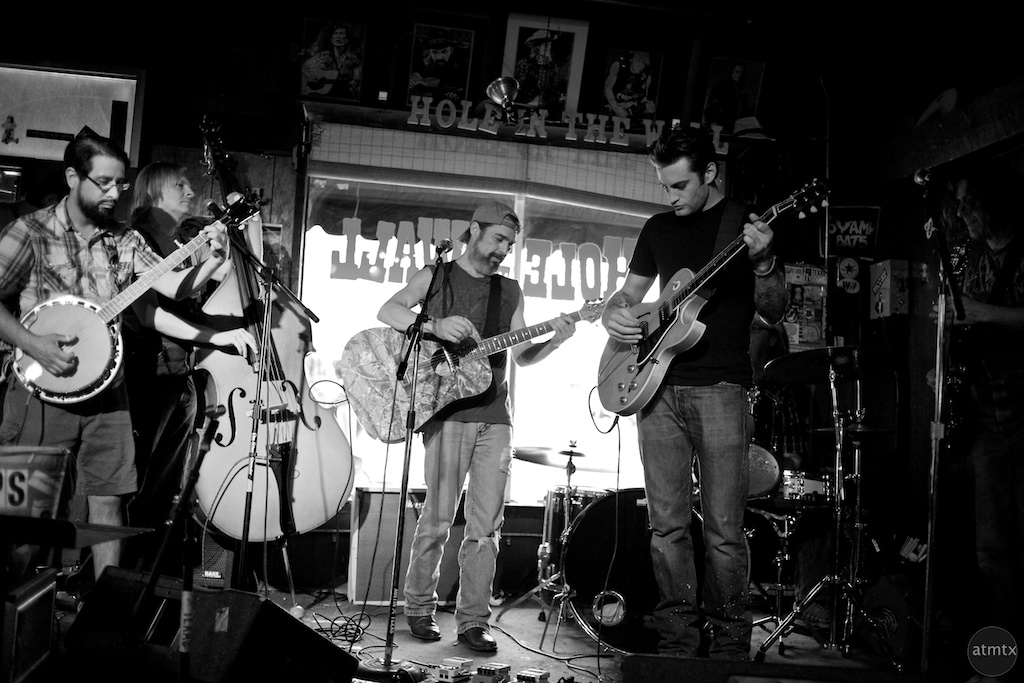 Red Dirt Rebellion at Hole in the Wall – Austin, Texas 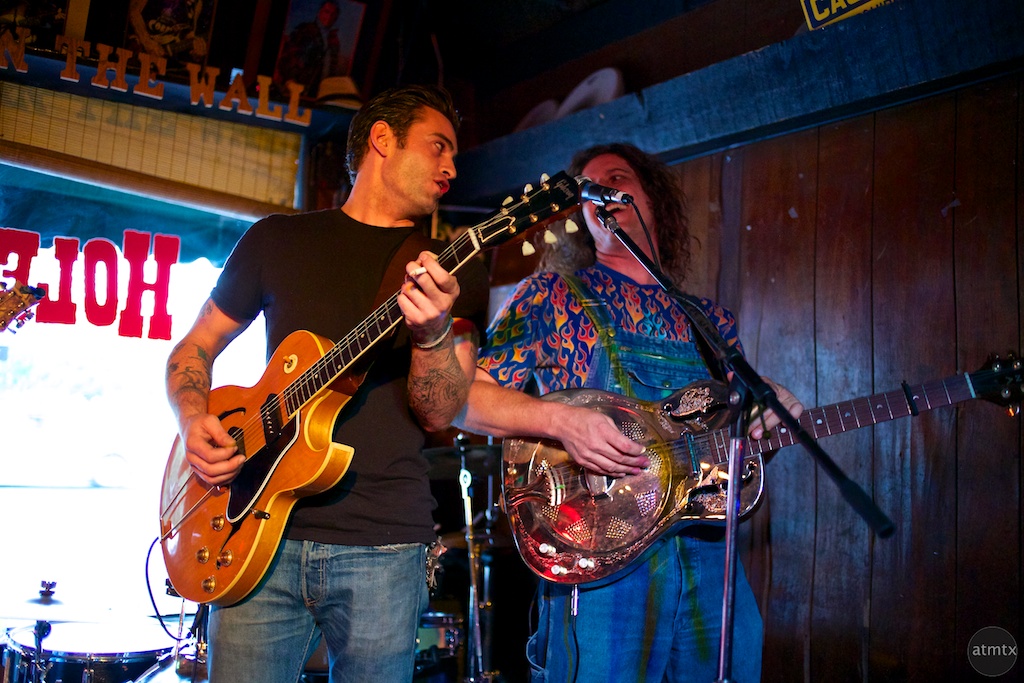 The camera handled the backlighting fairly well, I only need to boost exposure compensation about 1/3 of a stop. The details out the window blow out but I get that decent exposure on the musicians. Setting shutter to 1/100s which means that I needed high ISOs even before nightfall.

After dark, the dim lighting means, really high ISOs and slower shutter speeds. 6,400 or higher is not unusual. I’ve gotten acceptable images at ISO 12,800 on the Canon 6D. There is a bit of added texture as the noise increases (even with full frame) and I like it better in black and white. I shot these several months ago when I first got the 6D. I was in test mode back then especially to see how high I could push the ISO. 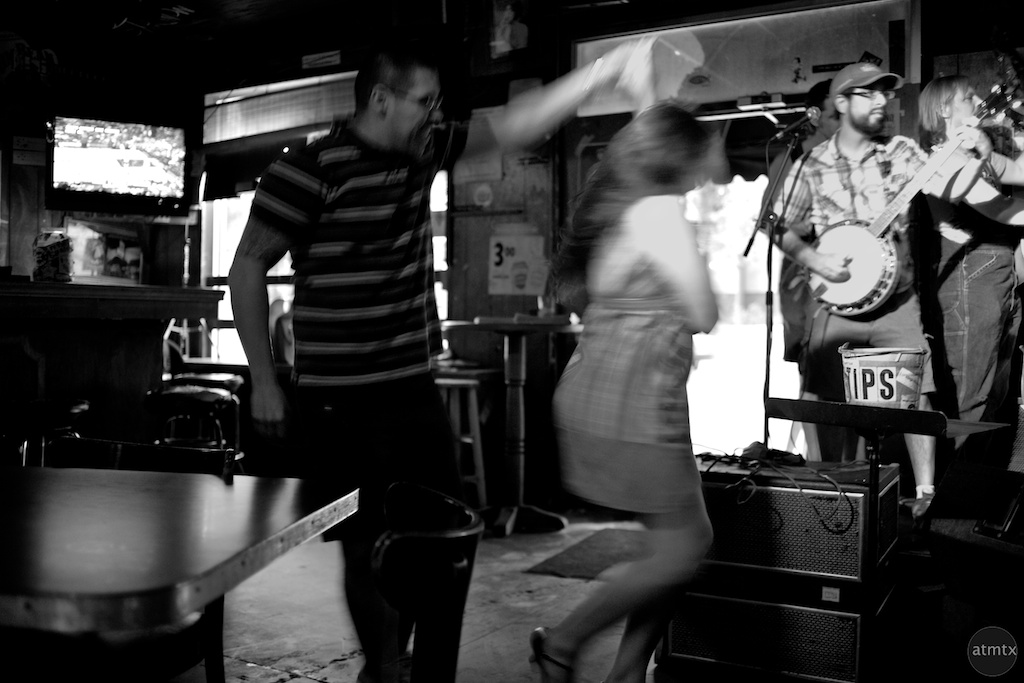 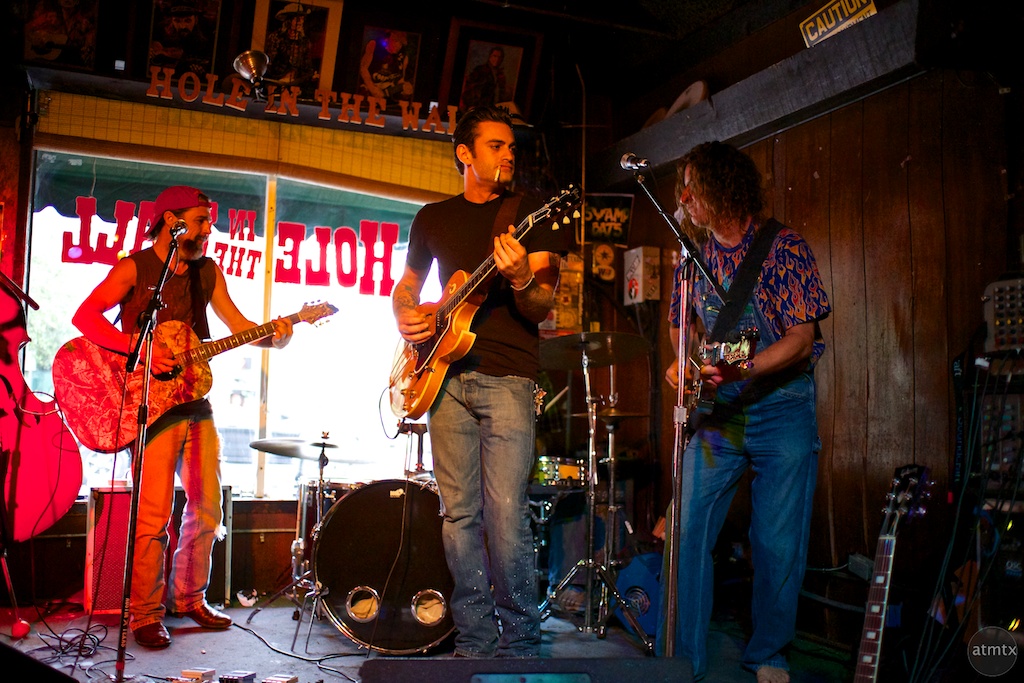 Mike’s been shooting and testing too. His choice, the Fujifilm X-E1. The Fuji despite having a smaller APS-C sensor does well in these dark places. You can see his blog post here with his X-E1 shots.

I got a twofer that night. Red Dirt Rebellion played the first half and many of the same members played the second as the Swamp Bats. The intimate crowd and the easy-going feel reminded me of old Austin. Hippies and college students together sharing a beer and good music. Towards the end Steve, on guitar, strolled off the stage, around the bar and even popped outside. I followed with my pumped up ISO.

Steve plays the crowd, Hole in the Wall – Austin, Texas

Steve plays outside the Hole in the Wall – Austin, Texas

The 6D handled the color well — it has a mellow richness. But the grainy high ISO black and whites fit the place and the mood. I decided to include both because I couldn’t decide.

It was a fun time, relaxing and low-key as I didn’t have to fight the downtown traffic. And as I mentioned yesterday, having a usable high ISO performance is a good thing. It enables images that were unthinkable a few years ago in digital or something not possible with film. It’s certainly fun to push the boundaries of your tool, but it is all in service of capturing that image you want. That, of course, is the most important thing.

Swamp Bats at Hole in the Wall – Austin, Texas