Several of my friends, including Kirk Tuck have posted pictures from the Graffiti wall in downtown Austin. I’ve said in the past that I’m not a fan of graffiti. I call it public defacement. Part of the negative conditioning I got growing up in New York City back in the 80’s, when the subways were filled will this “artistic” form of self-expression. But things are a bit different in Austin.

With my new Pedometer app (Pedometer++ for the iPhone 5S, highly recommended) encouraging me to step away from the computer and start moving, I finally decided to visit the wall yesterday. I figured a photo walk through downtown was a lot more interesting and creative than circling the block in my suburban neighborhood.

I took one camera, the Fujifilm X100S, as my light weight companion. With slowish focusing but excellent color, I figured the X100S would be perfect for a non-moving wall of graffiti. I was thrilled.

I shot mostly at f8, which is rare for me. As you know, I typically shoot at night, wide-open. And while even f2 on the Fuji is quite sharp, at f8 and ISO 200, the detail and color is fantastic. The overcast day was perfect and the even light made everything pop.


The Hope Gallery is ever-changing. Layers of paint and creativity follow a cycle of destruction and renewal. Look at the video Kirk made of the place back in February. In two months, everything is different. Even the graffiti artists have succumb to the speed of this modern, technology-driven, change oriented society. Like the online world which demands a steady stream of new content, this physical wall also obliges.

The place is popular with many taking or posing for photos.

It’s hard to judge the scale of the artwork. These 3 photos are closeups. Look at the leaves for reference.

But these 3 cover an entire wall. 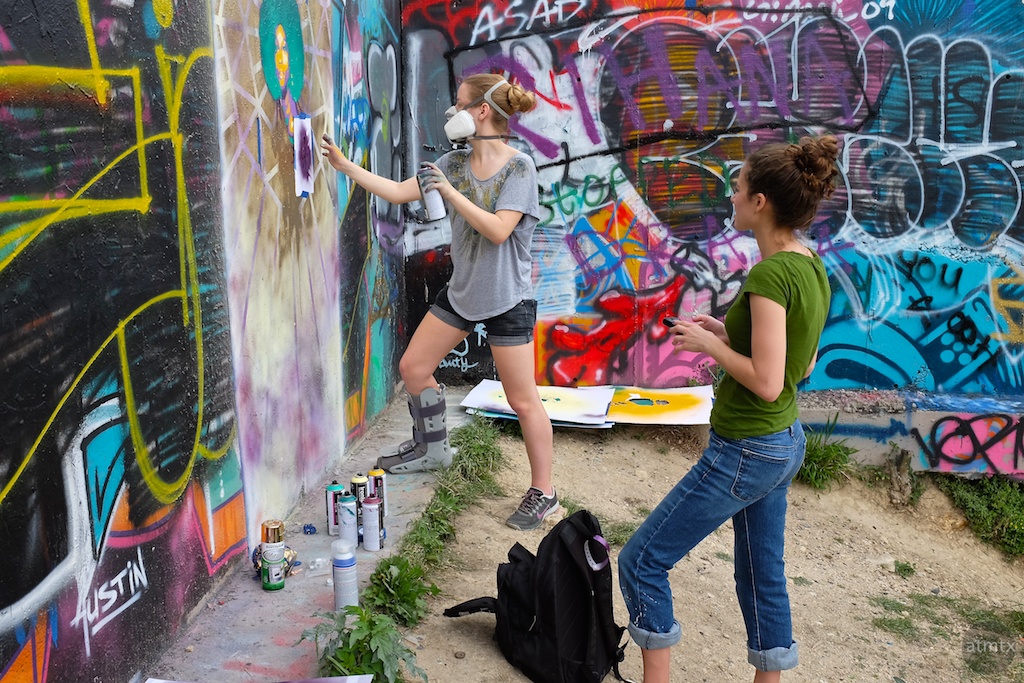 I saw several artists adding their mark. Christina and a friend created a multi-colored Diana Ross courtesy of a home made stencil. Another created stylized words more reminiscent of what I remember from those NYC subway trains.

People are friendly in a typically Austin fashion.

Here you can see the scale of this place. The angles and the foundation fed my predisposition for buildings and architecture. The ruin surely taps into my urban roots. These colors are something you don’t see in the U.S. It’s like looking at a Japanese game show with its unbelievable juxtaposition of color.

Make it up to the third level and you are rewarded with a commanding view of downtown Austin. The Texas State Capitol on the left along with the older high-rises makes the city look quaint. Hidden out of view to the right are the new, taller condos that appear to spout up with increasing regularity.

More views of the changing city in a future post.