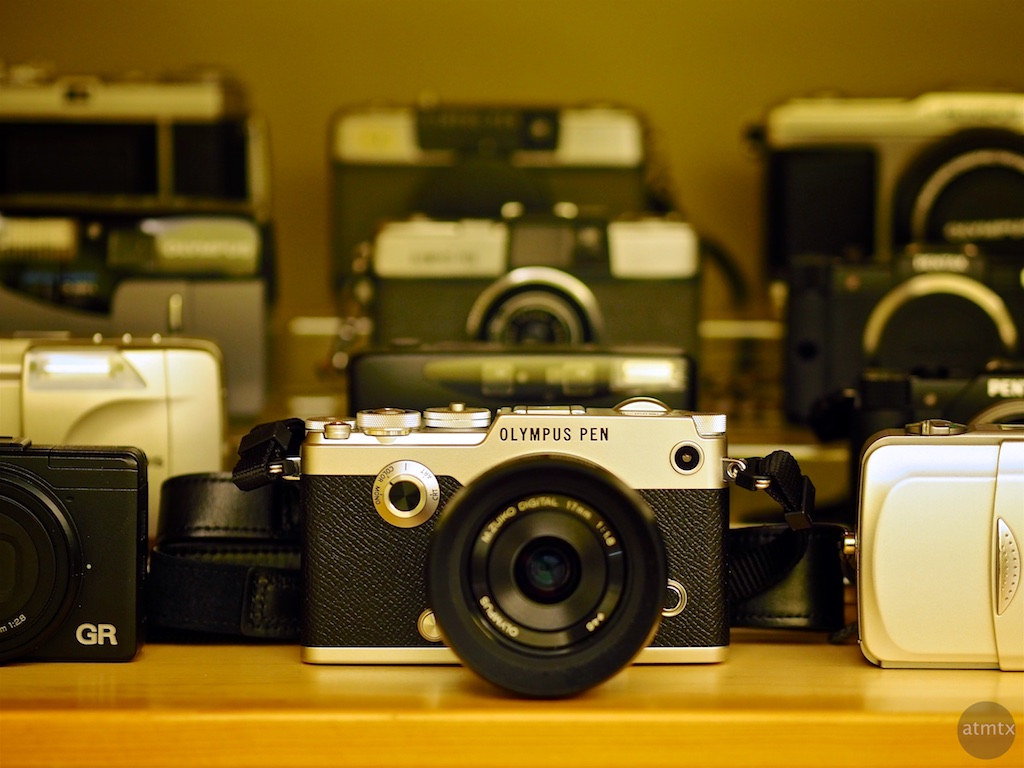 The Olympus PEN-F and the Collection – Austin, Texas

I was reading a recent blog post by Kirk Tuck, where he talked about what camera system he would get, if he could start over from scratch. I thought it was an interesting exercise and it got me thinking. If I lost by vast collection, what cameras would I purchase?

With the just finished Precision Camera Expo, fresh in my head, I mentally reviewed the options from the various camera manufactures. By nature, I tend to analyze and categorize, and I see the entire camera market in four groupings.

Canon and Nikon naturally group together. They are like Ford and Chevy in the U.S. Truck industry — the big giants. Traditional market leaders, who tend to be a bit stodgy and conservative in their approach.

I see Sony and Panasonic grouping together. Yes, their cameras have different sensor sizes but I see them similarly. Both big and highly diversified Japanese Consumer Electronics companies who happen to make cameras.

Olympus and Fujifulm, I think, are the closest together, philosophically. Both traditional camera makers that are not market leaders in DSLRs. They tend to make smaller volume specialty cameras that appeal to the photo enthusiast. It doesn’t mean pros don’t use them. However, you’re not going to see them typically used in pro applications in sports and photojournalism.

The fourth group is everyone else. Leica, the rich person’s boutique camera company. Ricoh-Pentax which creates eclectic cameras and traditional niche DSLRs. Hasselblad, Sigma and Phase One which are low-volume specialty companies.

Unlike Kirk, who is a professional photographer and has specific needs, including video, I have complete freedom. As a photo enthusiast, I can get whatever makes me happy. From my blog, you can tell that I like to shoot during my travels, on the street and in the city. I’m also the family photographer, documenting my quickly growing boys and aging adults. Finally, I dabble in landscapes and portraiture but have the desire to grow in these areas.

Canon and Nikon are out. I’ve bought into mirrorless for a more compact and modern approach to photography. Sports is not a huge concern (though I’ll probably shoot high school lacrosse for one more year) so I have no need or desire for a DSLR (with one exception, I’ll mention later). Despite the two giants dabbling in mirrorless, they are still DSLR companies.

Sony and Panasonic make very capable cameras but they just don’t feel right for me. Sony shutters are loud and unsatisfying. Panasonic has nice ergonomic grips but their photographs, as well as their camera designs, look dull. Somehow, the Sony and Panasonic cameras feel like electronic gadgets that take pictures, rather than traditional cameras. It’s a subtle thing, but I just don’t feel the passion shooting with these cameras.

The camera companies that entice me the most are Olympus and Fujifilm. Yes, their cameras can be a little quirky. One can argue that their retro designs are more nostalgia over substance, but they have soul. They have a feeling about them that delights the photographer. Fully modern but with a tie to the past. I would be happy with cameras from either company but Olympus comes out ahead, for a few reasons.

Practically speaking, the OM-D E-M5 Mark II, wins. It’s compact, very fast, with a big EVF and it has weather sealing. Emotionally, however, I prefer the PEN-F. The PEN-F is more stylish with perfectly clicky metal knobs and a satisfyingly subtle shutter sound snick. If I can buy only one camera, it would be the OM-D E-M5 Mark II. If I can buy two, it would be the PEN-F and Pentax K-1.

Why the Pentax K-1? It’s great for landscapes and portraits, two areas that I want to explore. The K-1 has a lot of special features for landscape photographers and it’s their strength. Despite being a DSLR, it’s not great for sports, rather its adequate focusing works best for slow-moving subjects. It has great dynamic range and the same sensor as the Nikon D810. But unlike the Nikon, the Pentax has in-body image stabilization, a color correcting sensor shifting mode, horizon correction and an amazing astrotracer function that makes clear long exposures of stars.

If you read Kirk’s assessment, there are a lot of similarities to mine. He feels like he needs the Sony for his pro work but he really likes the Olympus for his passion. Luckily for me, I only need to consider my passion.

6 thoughts on “The Cameras I Would Get, If I Could Start Over”