Following my predictable pattern, Laura’s next for the monochrome treatment. Unlike yesterday’s monochrome Elena, which was done completely in camera, this image was post processed from RAW to simulate the in-camera, contrasty PEN-F black and white. The Olympus PEN-F has a few built-in monochrome effects. I usually use “Mono Profile 2” which gives a high contrast, grainy Kodak Tri-X type look. However, I experimented with “Mono Profile 3”, which simulates IR (Infrared) Black and White, which you can see below. 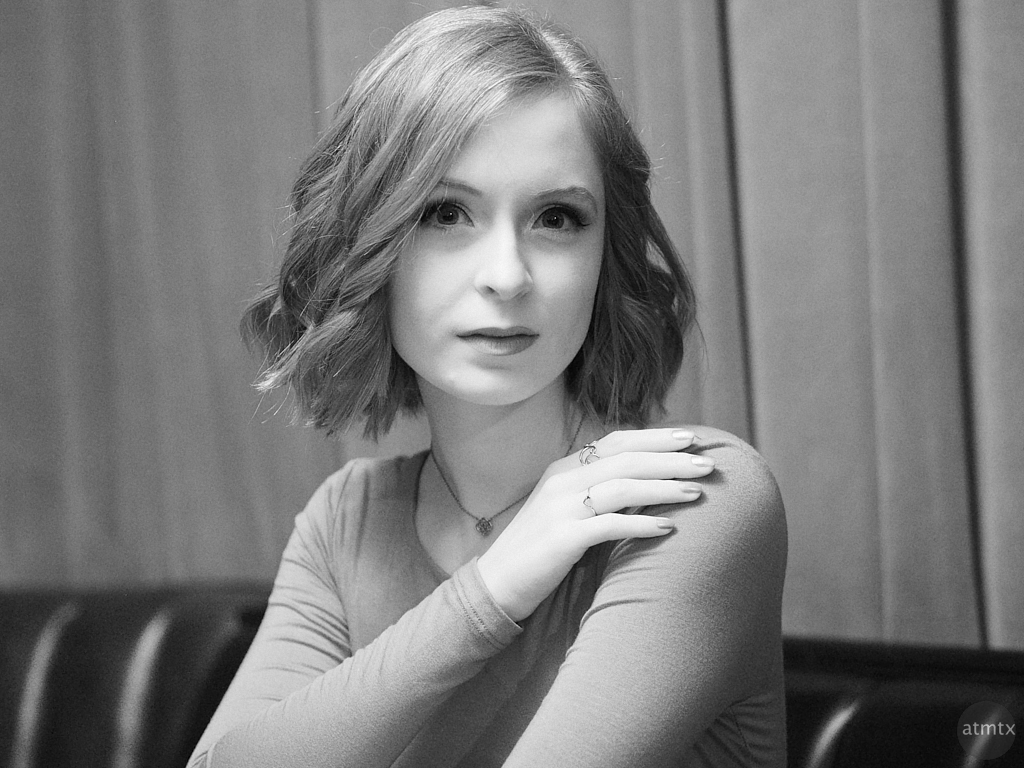 The simulated IR changes the portrait drastically. Laura’s fair skin is rendered ghostly white and her hazel eyes, black. It’s an interesting effect, and while good to experiment, I didn’t particularly like it. The monochrome lacked the bite and contrast that I love. Perhaps it might work better for landscapes.

Unfortunately, with the JPEG already set to the IR mode, I didn’t have my preferred contrasty look that would match the other portraits. Also, shooting the IR mode affected the exposure, which made me underexpose by 2/3 of a stop. I massaged the RAW a good amount to get the “Laura in Color” photo that I posted three days ago. Once I got the color image that I wanted, I then created the monochrome versions.

I then used a “Kodak T-Max 3200” simulation to add additional contrast, grit and texture. I further tweaked the look by altering the color channels and did some burning and dodging to create this. All of the RAWs were manipulated using Capture One, both by using third-party film simulations as well as the built-in tools.

On the road to simulating the Olympus PEN-F monochrome, I decided to darken the background by creating a layer adjustment. Out of all the black and white conversions, this is my favorite. The dark background makes Laura pop. I like the balance of contrast and details, which I find a bit more satisfying than the default PEN-F look. There’s still grit, which I added via simulated grain.

While I didn’t perfectly achieved the PEN-F look, the top image is my final version, with even more contrast, a darker background and lighter face. I found simulating the PEN-F surprisingly challenging. Some of the details are more washed out, on purpose, again to make it consistent with Elena, who I posted yesterday and Libby, who I will post tomorrow. Taken as a set, I think the three monochromes looks consistent as do the three color portraits.

I’m still a novice with black and white and post processing this portrait was instructive. There’s a lot to learn and with the power of Capture One and I hope to get better. You may like the low contrast grays, the extreme blacks or somewhere in between. There is no such thing as a proper black and white, of course, and each person will have their preferences.

The Olympus PEN-F JPEG effects are easy but you can’t change much of it in post. The benefit from using RAW is that you can dial in your preferences for the ultimate in fine tuning. It can be fun, or a major pain in the neck, depending on your love or hate of post processing.

5 thoughts on “Laura in Monochrome”