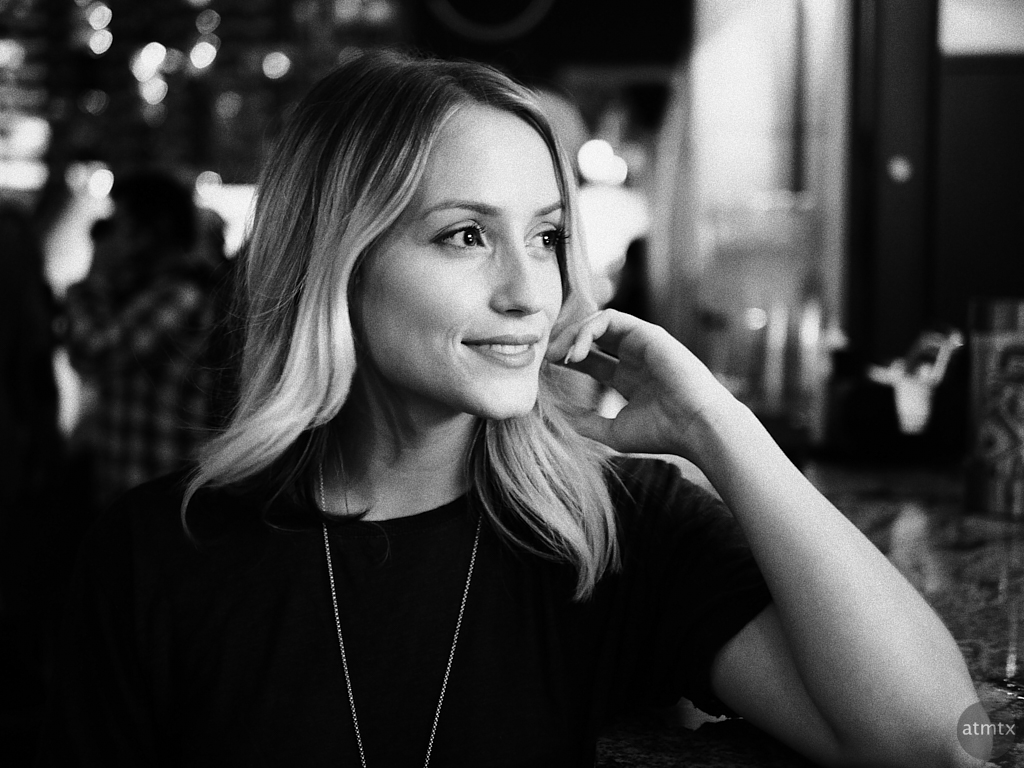 It was a comfortable breezy night on the patio of the Hanger Lounge in downtown Austin. Charles from Olympus was there handing out demo cameras and lenses and in the corners, a couple of lights setup for portrait shooting. I was having a good time chatting with friends at the latest Drink and Click. I wasn’t shooting much, just the occasional scene that piqued my interest.

I was prepared though, with my pair of Olympus cameras — the OM-D E-M5 Mark II and the PEN-F. I occasionally helped new to Olympus camera testers and generally just socialized until I struck up a conversation with Michelle. She was interested in photography and modeling and I had an impromptu idea for a challenging and atypical model shoot. The lighting setups were full of people, plus I wanted to do something different. I coaxed Michelle into doing a portrait shoot by bar light.

Yes, it was dim, though I had the occasional flicker from a, tuned to sports, 42″ TV screen, on the back wall. I was counting on image stabilization, a f1.4 aperture, a steady model and a grainy black and white in-camera JPEG mode that I use often. Like I said, it’s not a typical model shoot. But it was fun. 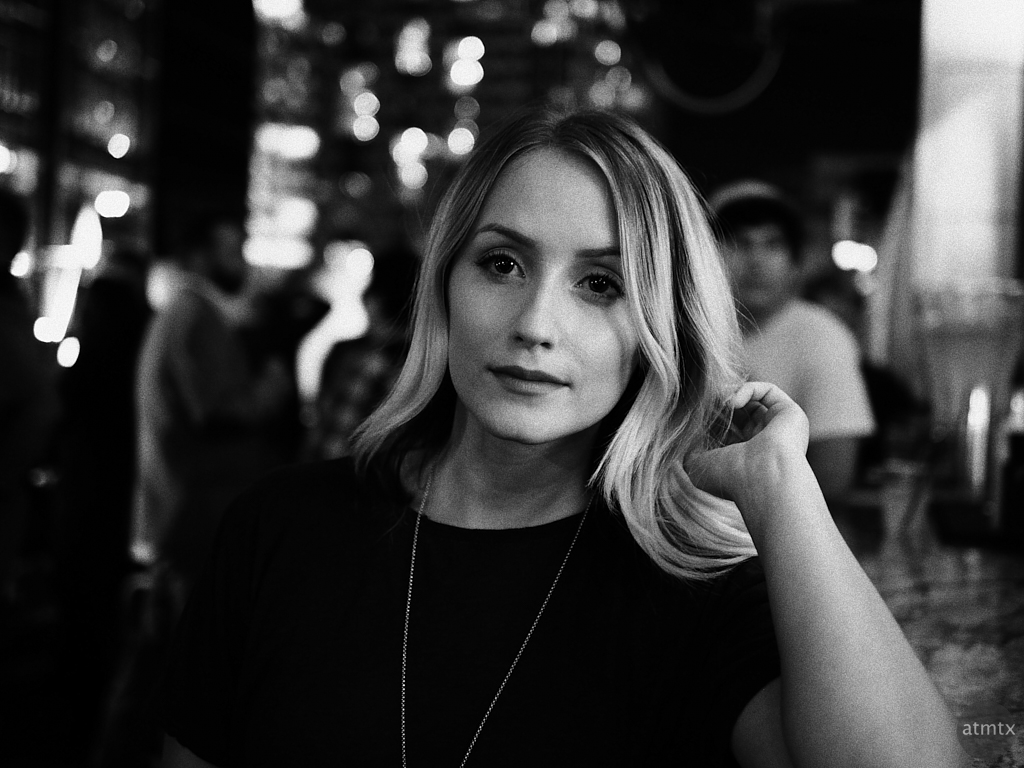 I was going for a casual and candid look — like capturing a stranger at a bar. The dim lighting, muddy and grainy texture adds, perhaps, a bit of mystery to some of the photos. All are out of camera JPEGs without any modification. 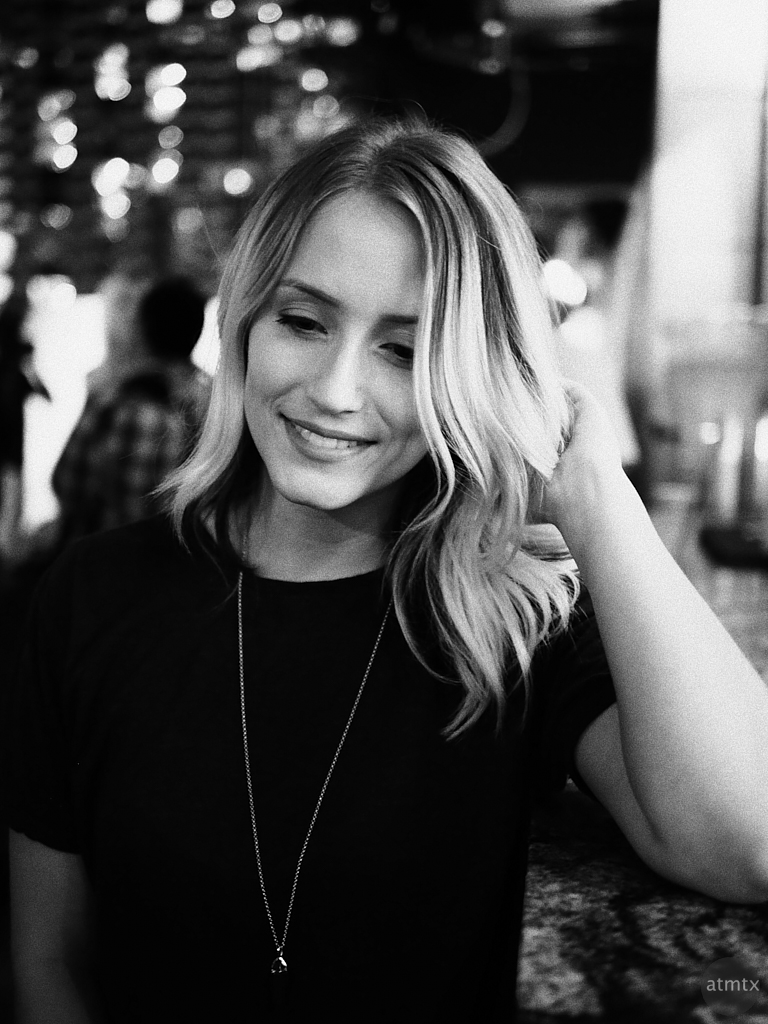 I shot a bunch since it was at a slow shutter speed and to maximize the number of keepers. In retrospect, I should have used a slightly faster shutter, raising it from 1/13 of second to 1/20 or 1/25. The impact of the higher ISO probably wouldn’t have mattered with a grainy black and whites and I would have gotten more clean, motion blur free images. 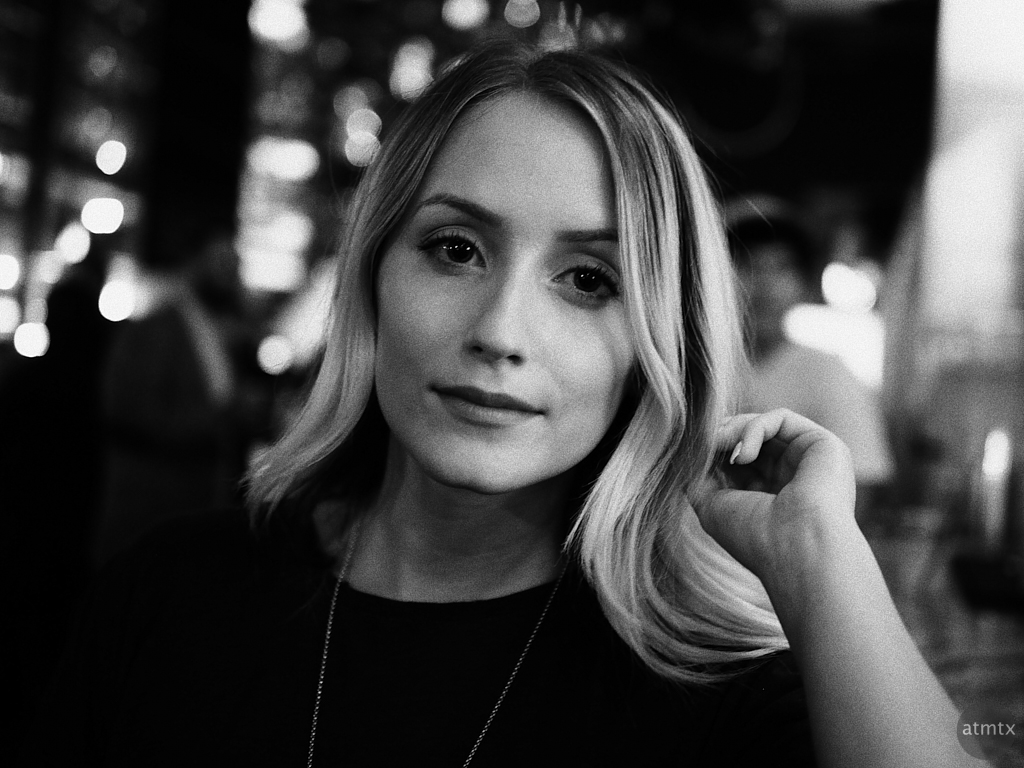 Overall, I’m pleased with the results. First and foremost, these black and white portraits look different from the usual posed portraits, without any of the elaborate off-camera lighting. Having the model at a bar makes it more casual and more conducive to candid, natural looking portraits. I also continue to learn more about the capabilities of low light portrait shooting and using the grainy Olympus in-camera JPEGs, which I’m oddly attracted to.