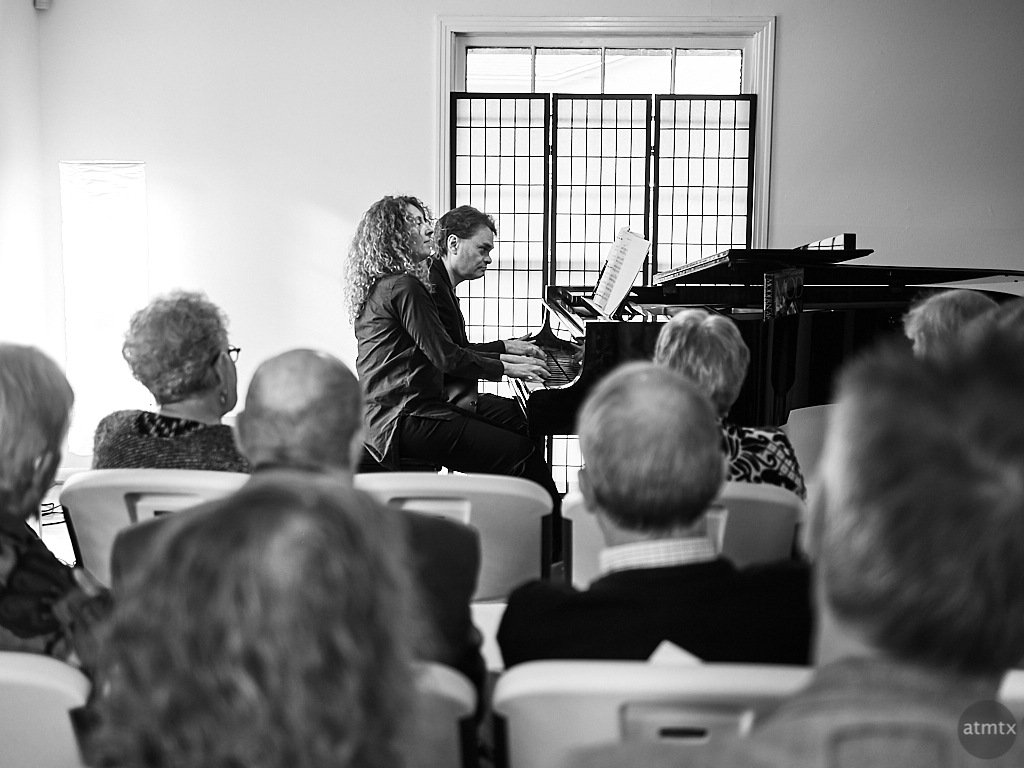 I recently learned that, in times past, classical piano music was often enjoyed and even composed for intimate surroundings. Salons, with audiences of perhaps 20 – 30 people, were a wonderful way to enjoy this music. In the age of mega-stadiums and grand concert halls, it’s so refreshing and engaging to listen to virtuoso performances in a space the size of a living room. That was my experience, a week ago, when I attended a four hands piano performance at Adam’s Music House. Pianists Carla McElhaney and Tony Tobin shard one keyboard and dazzled the audience.

The concert was a collaboration. Carla, a co-founder and member of Revel, a classical band with a changing mix of instruments, teamed up with Tony, artistic director of Adam’s Music House. This sold out Revel concert called “Legacies” was a big hit.

I’ve been to Tony’s concerts before, which I’ve featured on this blog. He is a friend, photographer and professional classical pianist and in my circle of creatives in Austin. This concert with Carla and Tony was especially fun and I thought it would be a treat to feature some photos and even an unplanned, impromptu video recording. 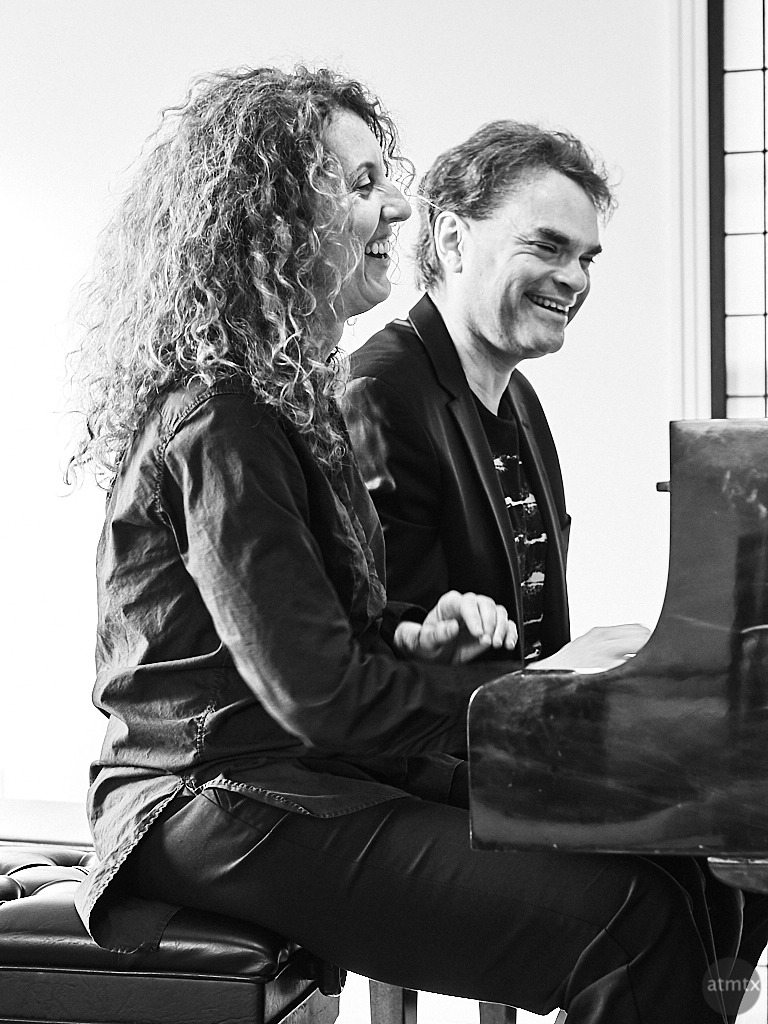 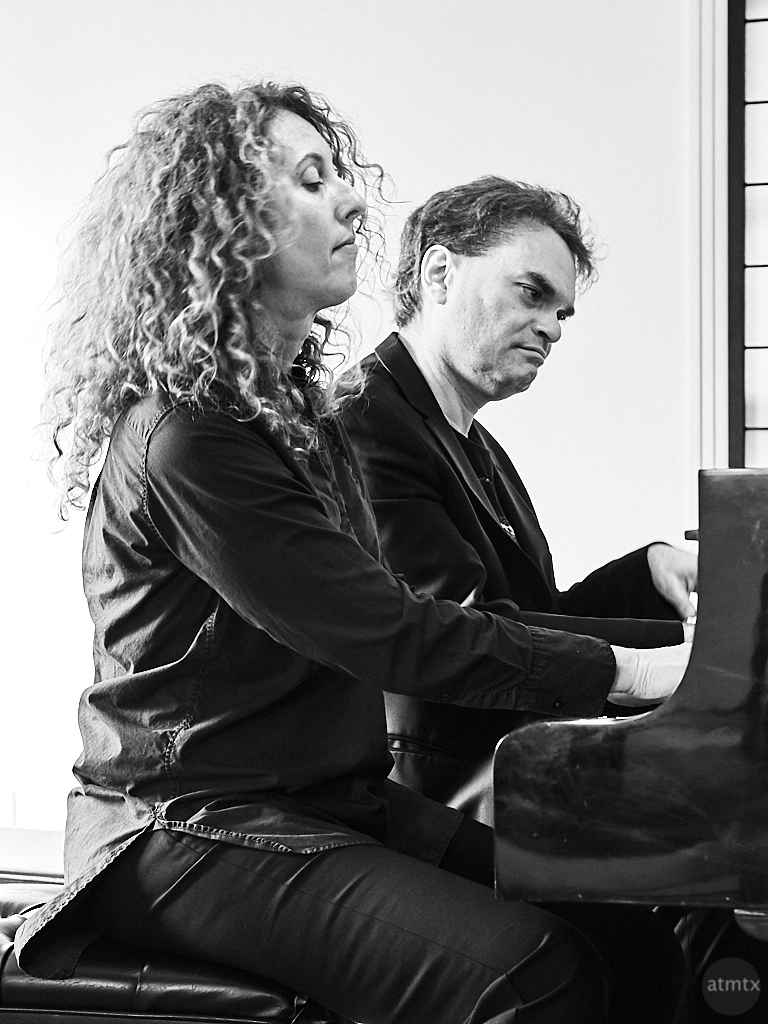 I was told that most professional pianists don’t like to share the keyboard — it’s typically their private and exclusive domain. So when two pianists perform together, they need to share a chemistry, camaraderie and a compatible style. You can see it in these photos I captured before the concert. I found Carla and Tony playful and professional at the same time, even during practice.

Music from Mozart, Brahms, Debussy and Dvorak all featured four hands. Double the number of hands mean a level of complexity and sophistication not possible by a solo performer. There’s also fun interactions between the performers, which you can see on the video.

Please excuse the poor camera work on this video. I decided, really on the spur of the moment, to record part of the performance. I shot it hand-held on my small point and shoot camera. I’m happy with the quality of the video and audio, but it would’ve looked a lot better on tripod. You get a good feel for the concert, however, which I thought worthwhile. 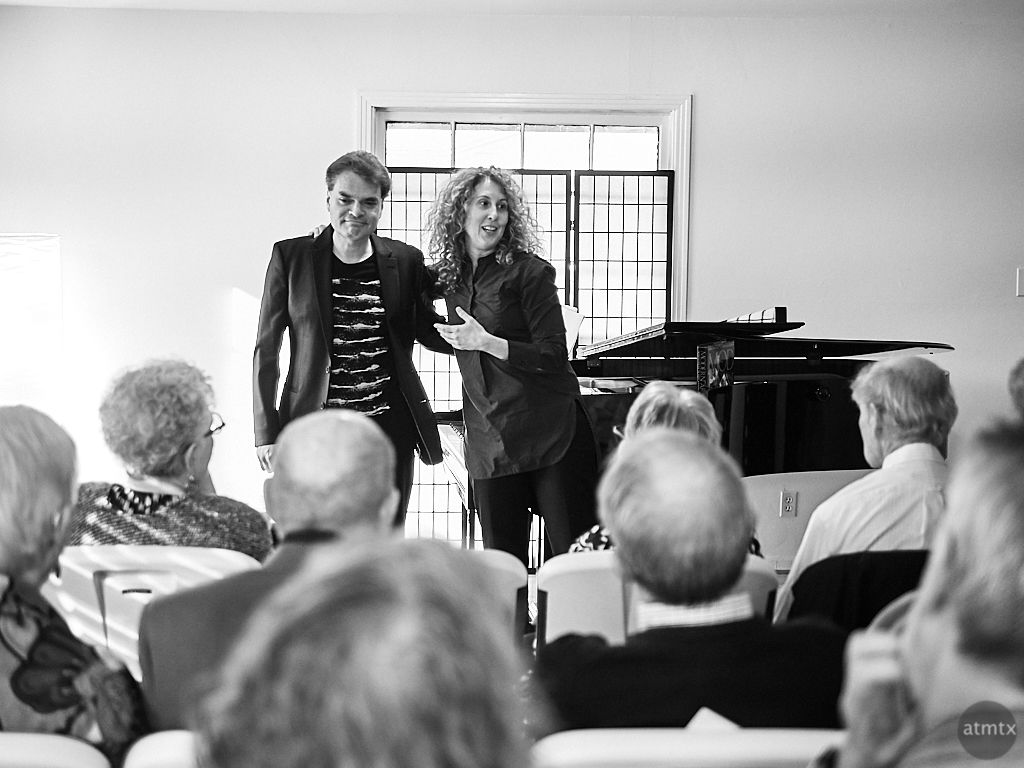 Beyond the performances, what really sets apart a salon concert like this its interactivity. It’s like you are invited into someone’s living room to listen to some amazing performances. The musicians have a chance to interact with their audience. 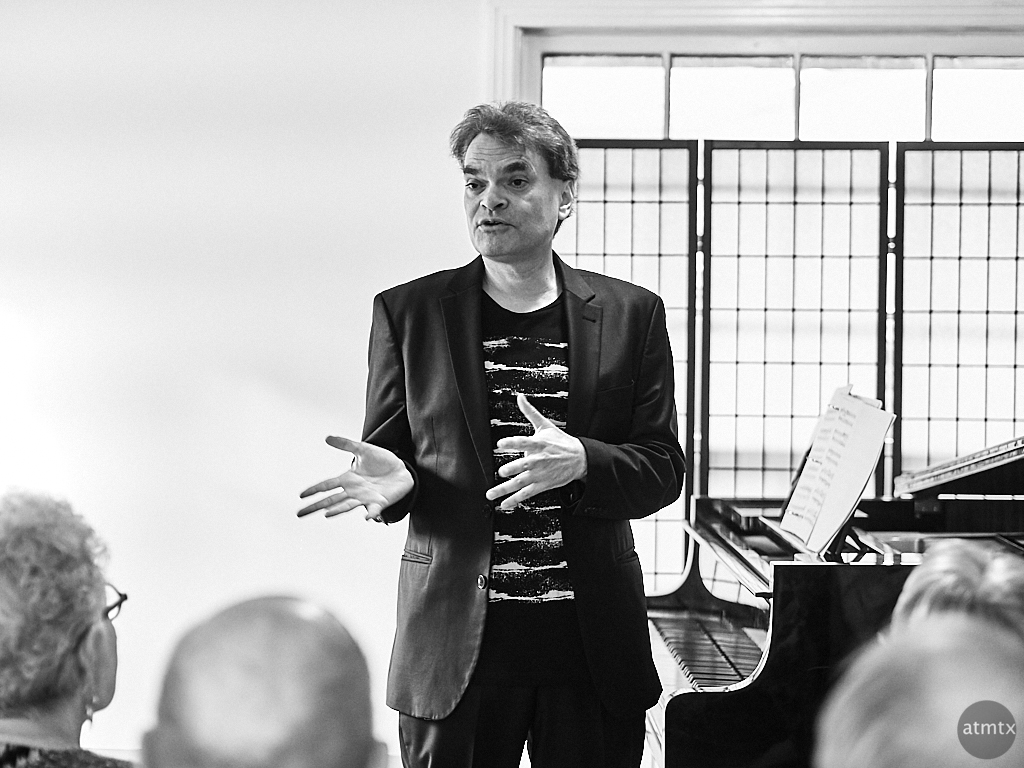 I also like how the musicians talk about the story behind the music and composers. There’s a light-hearted educational component at play, mixed within the lovely music playing. Adam’s Music House is something new. It’s just getting started and this was one of their first concerts. Their tag line is “For the Love of the Piano”. The facility is not only going to feature salon concerts, like this one, but education sessions, lessons and even fellowships. I’m looking forward to it and I’m sure I’ll blog about it more in the coming months. 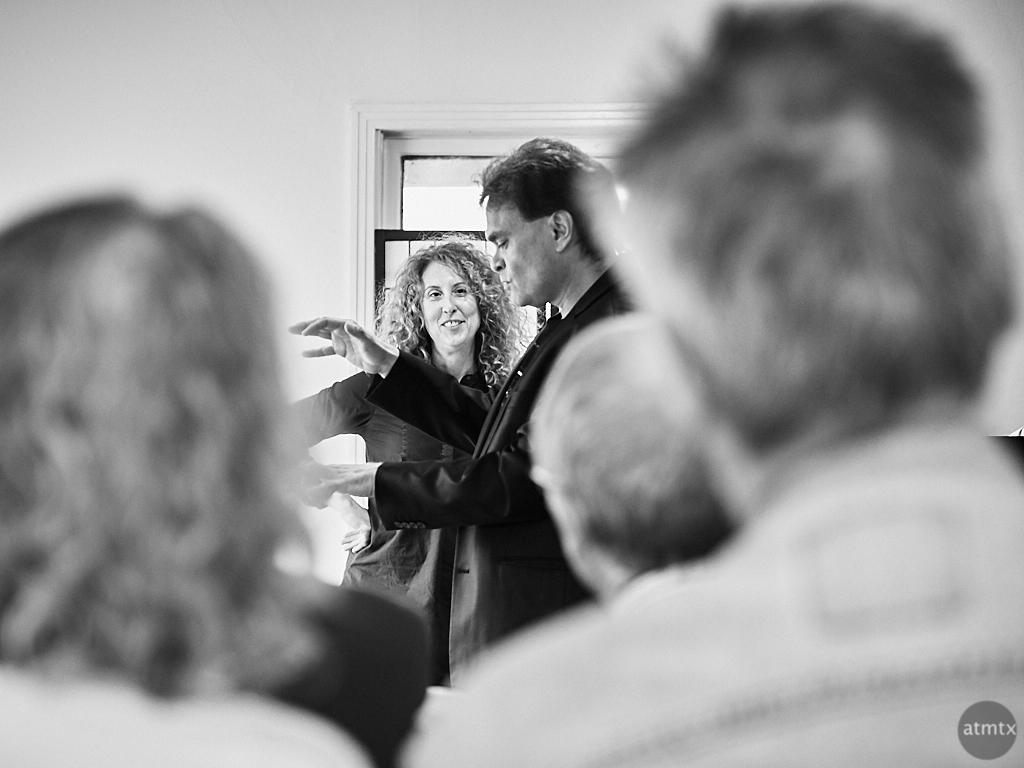 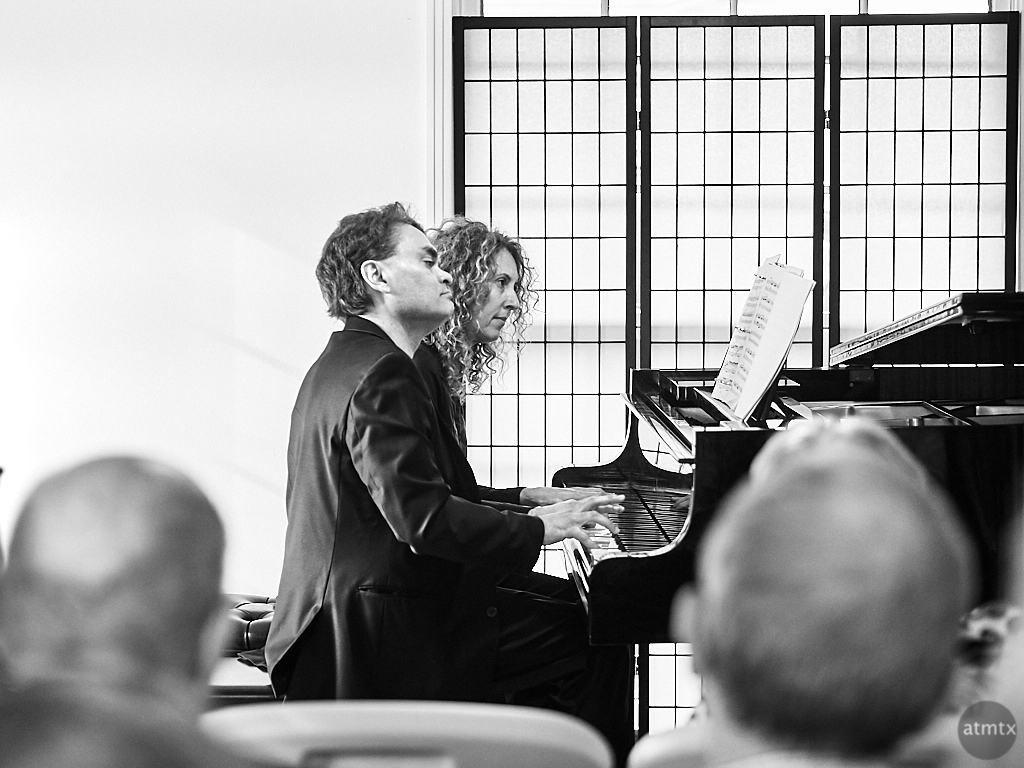 Finally, the last couple of photos, using the audience to frame the pianists. Perhaps a slightly unusual angle but interesting, I think. Notice also that Carla and Tony traded places during the concert. Compare this photo, with the first photo, up top.