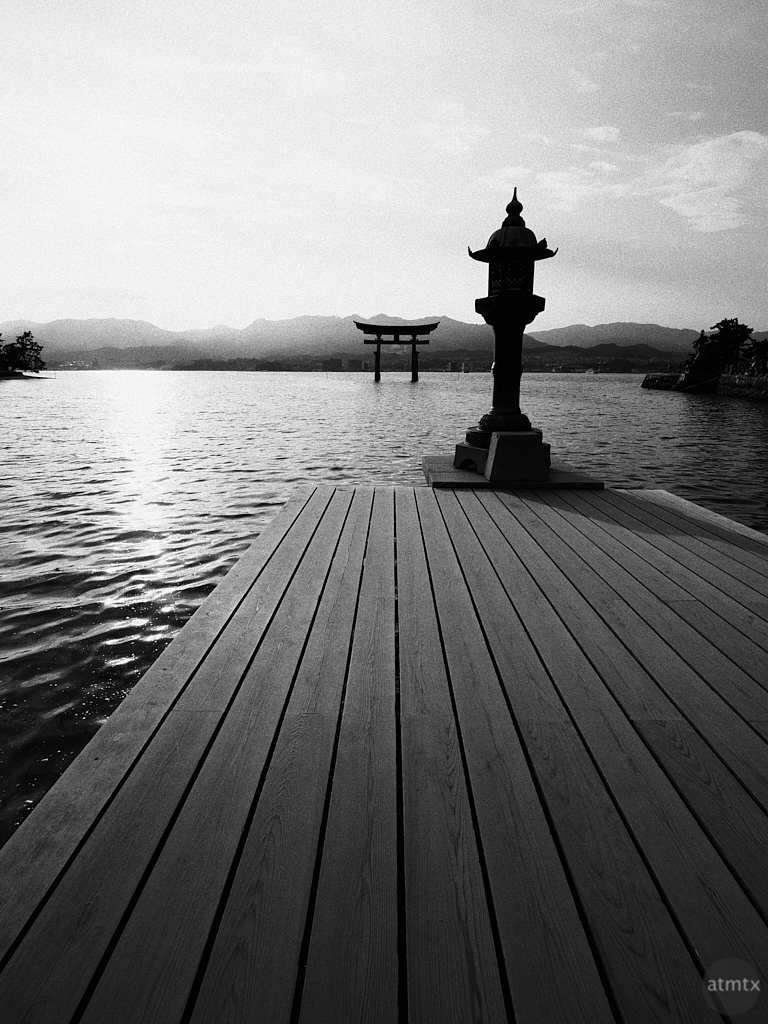 Once in a while the photo gods smile upon you, the moon phases align and you slip into a creative flow. Despite my prolific photography, this doesn’t happen often. There are good days and not so good days. I don’t know if it was the ferry ride, but when I got to Miyajima something clicked.

As I recall, it was a comfortable day with the late afternoon rays warming my face. I got into the Itsukushima Shrine with an hour or so to spare. I looked out toward the famous giant torii off in the distance.

I shot with my Olympus PEN-F in monochrome mode — this contrasty, grainy film simulation which I’ve experimented with, increasingly before my Japan trip. But, as I looked through the viewfinder at Miyajima, it was the first time I really fell in love with black and white. Not as a gimmicky filter to be applied for effect, but truly as a slightly abstract and simplified expression of the real world. 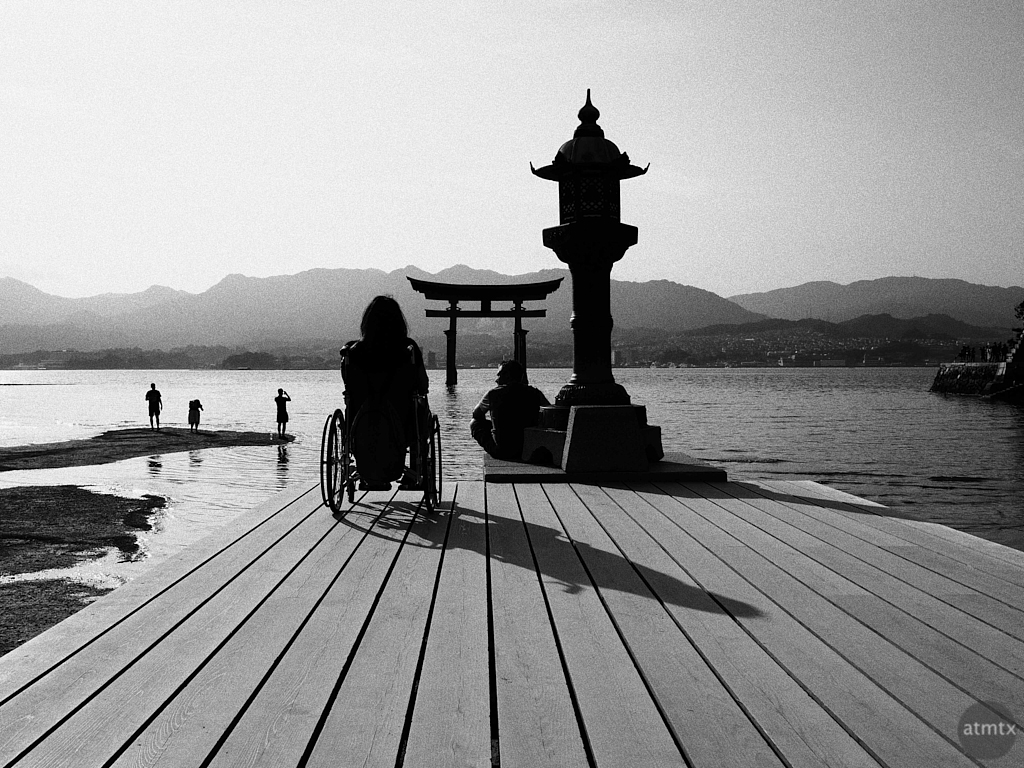 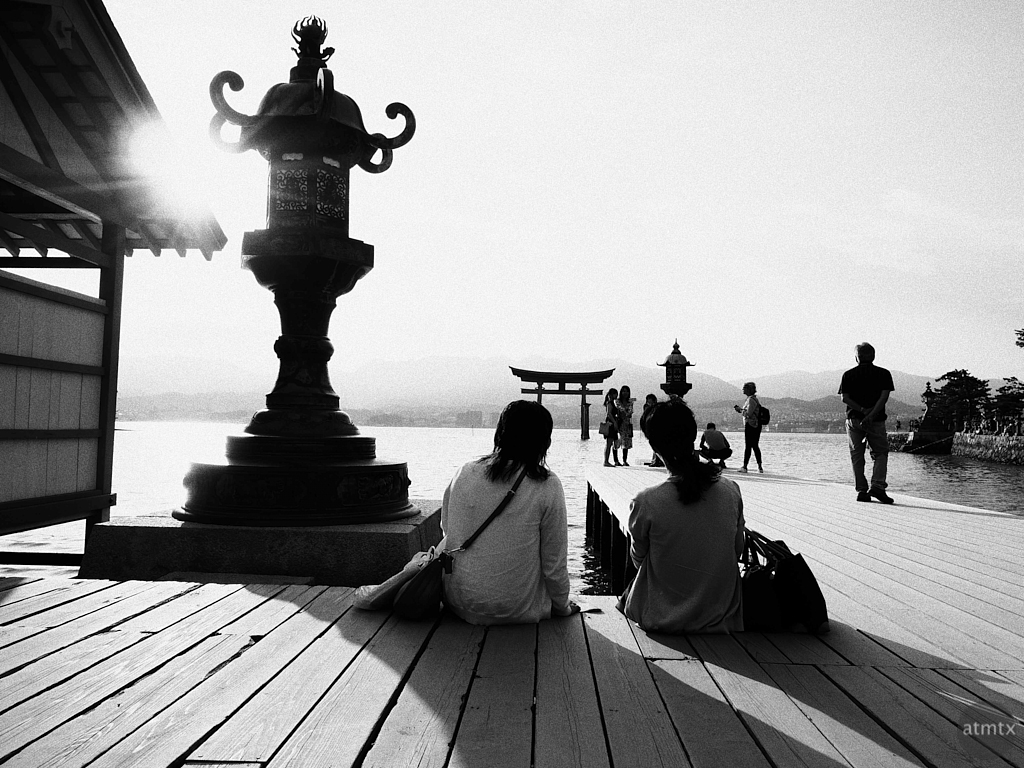 Getting there near closing time turned out to be a blessing in disguise. More tourists were leaving than arriving, which meant smaller crowds. There was sort of a low-key Japanese style equivalent of Key West going on. People just hung out, watching the sunset, taking in the beauty and peace of Miyajima. It was nice to capture this feeling in photographs. 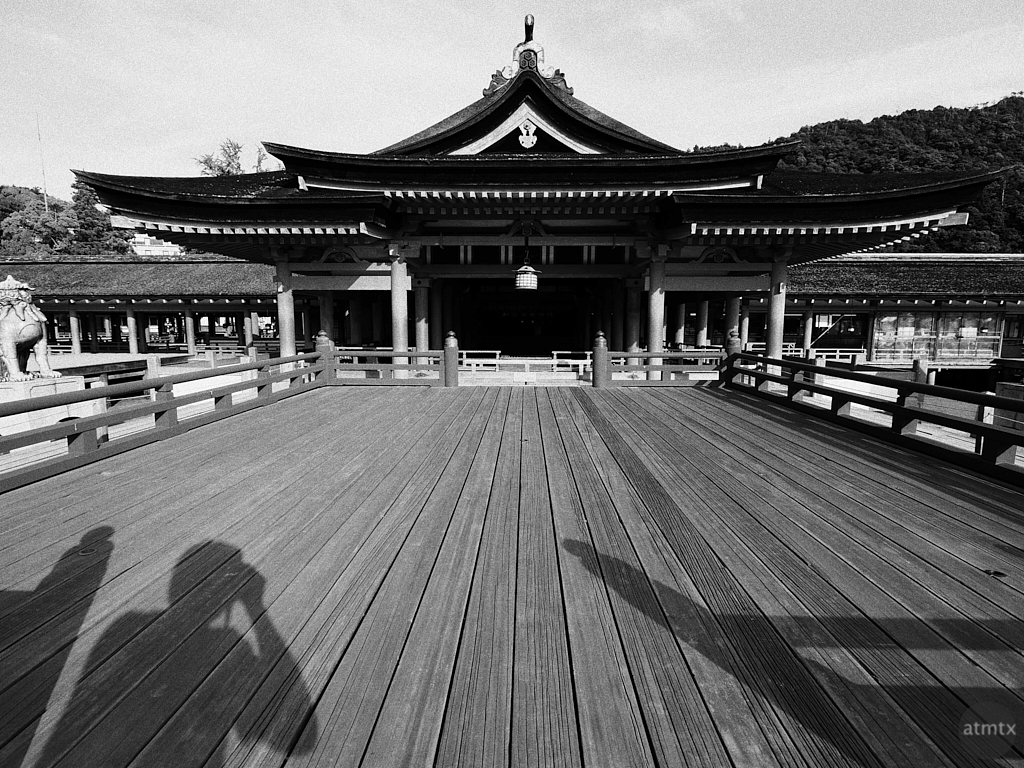 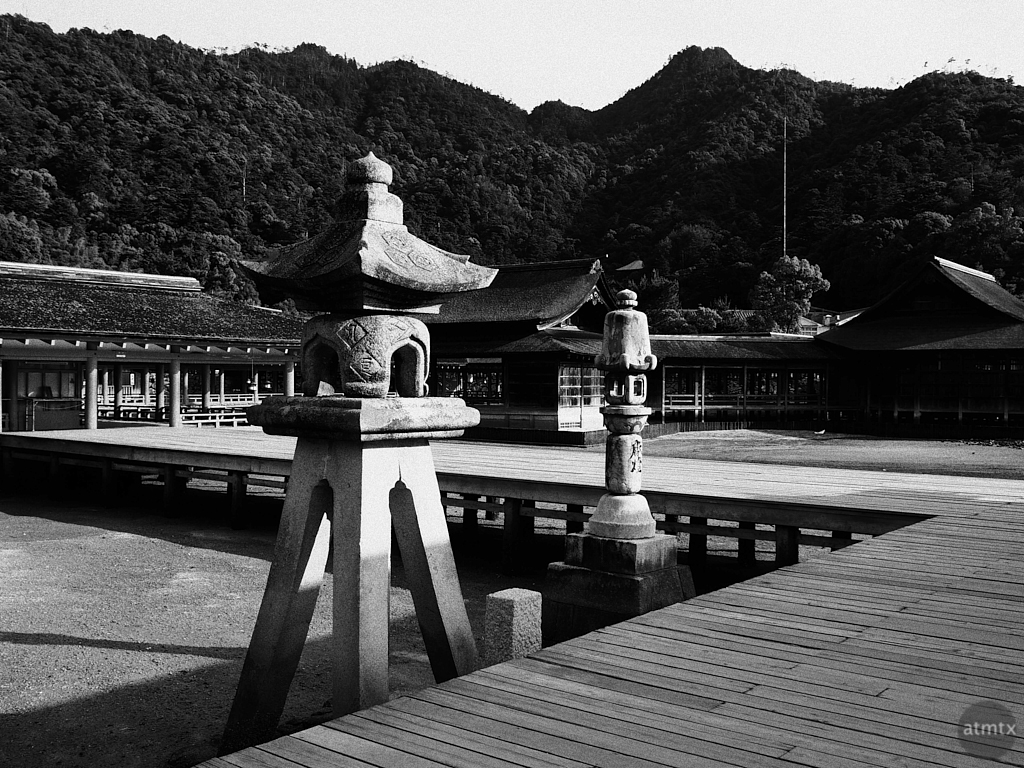 I was drawn mainly to the distant torii and the water, but behind me was the shine itself, which was also worth capturing.

You might notice varying amounts of water around the decks. That’s because the character of Itsukushima Shrine ebbs and flows with the tides. At low tide, you can walk out to the torii. At high tide, everything under the shrine is completely surrounded by water, giving the appearance that the entire wooden complex is floating.

There are published tide schedules so that you can time your visit. 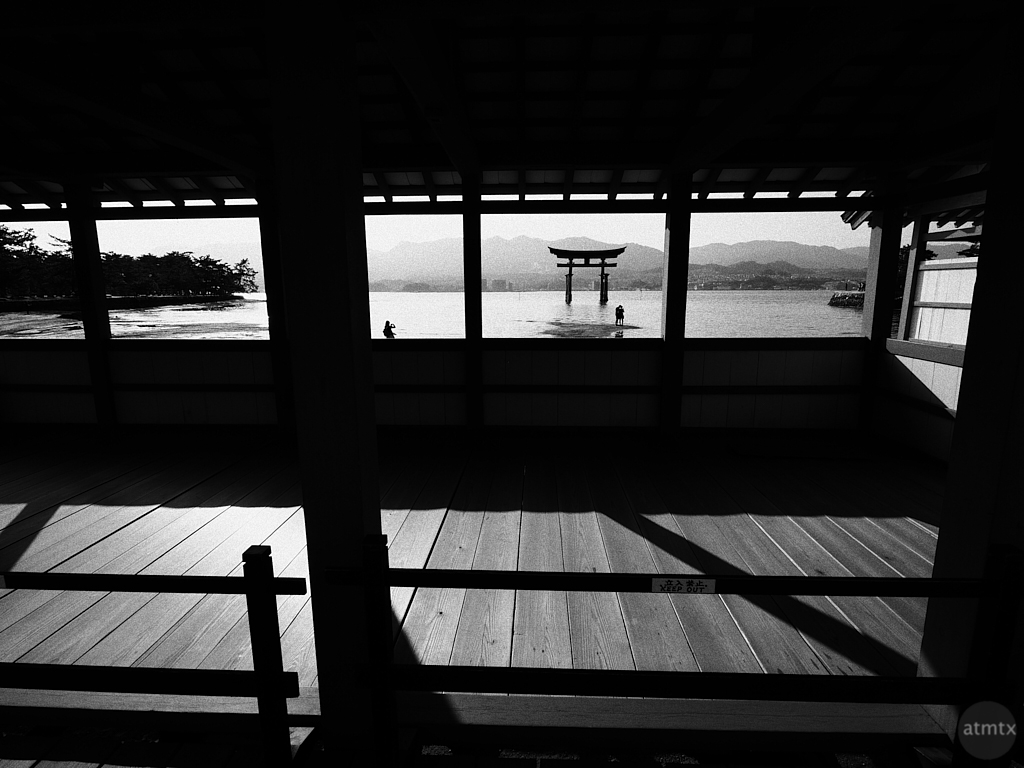 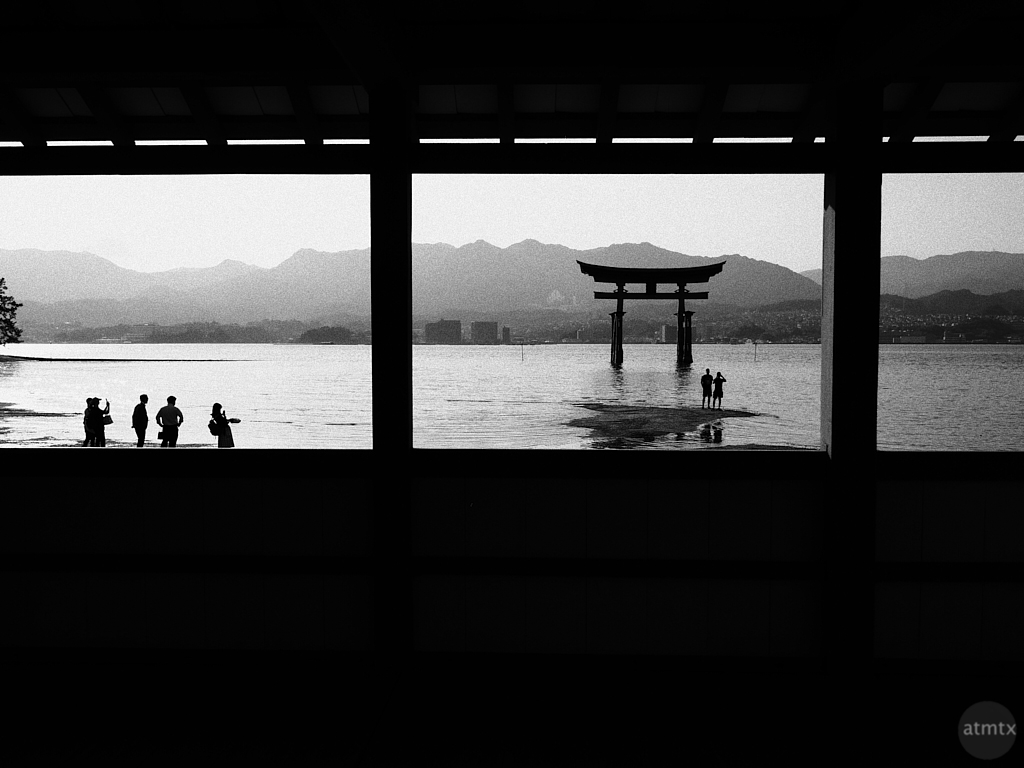 As I toured the temple complex, the distant torii still beckoned. I saw framing opportunities in different focal lengths. Contrasty black and whites and silhouettes are your friend.

I used the Olympus 9-18mm wide-angle lens, which is surprisingly versatile and wonderfully compact. It gives me a 18mm to 36mm range in full frame equivalents. You can see the focal length range with these two photos. 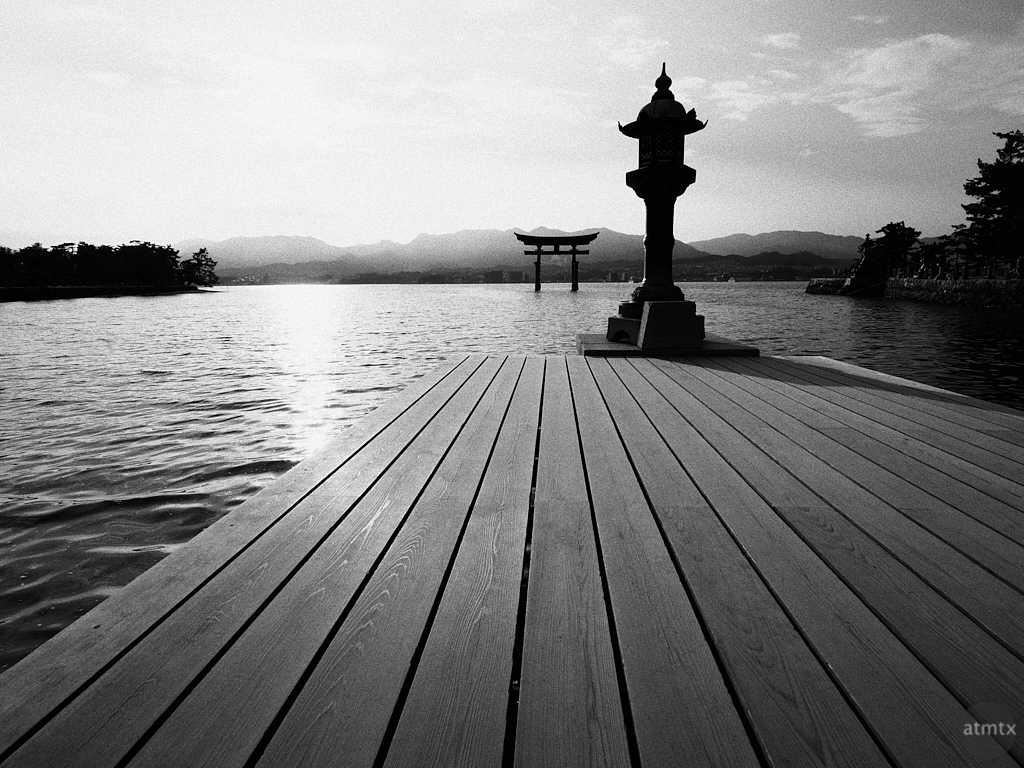 I waited some more for the tide to come in and the people to leave, giving me zen serenity. It’s basically the same shot as the first one, but in the landscape orientation. I’m not sure which I like better.

As I mentioned earlier, I made all photos with the Olympus PEN-F with the 9-18mm f4-5.6 lens. Out of camera JPEGs set to the built-in “Mono Profile 2” mode.