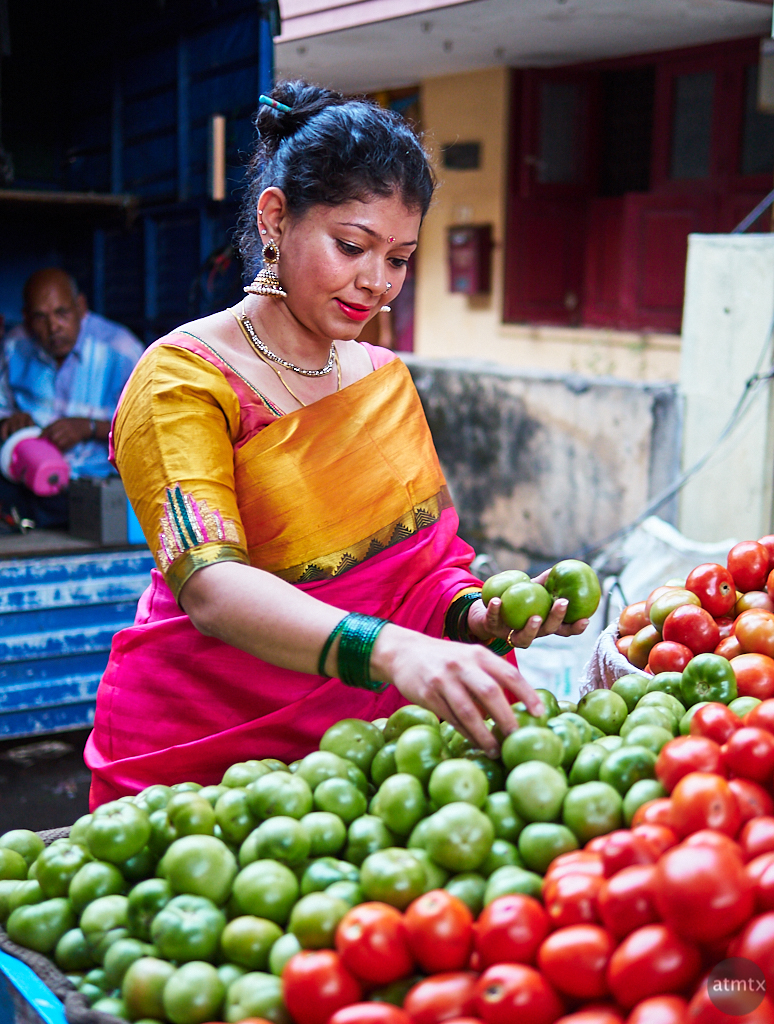 For the last photographic activity of the day, my friend Pabish scheduled a photo shoot with his friend, Sahana. We were in a vibrant area of Bangalore called Malleshwaram, with lots of stores and markets. Though I make portraits at Drink and Click events, I haven’t been on a photo shoot for years. Combined with a new and exotic location, I was both excited and a little uncertain.

We planned for a late afternoon start so that we can catch the golden hour and shoot into the evening. Although we went to several locations, I was surprised that we spent less than one and half hours on the entire shoot. Compared to my fast paced photography at the KR Market, however, our time with Sahana was relatively leisurely.

I’ve developed a black and white style for my Drink and Click Portraits, but I wanted to do something different. Sahana’s beautiful and colorful silk Sari needed to be shown off in color. I also wanted to complement that with a colorful environment which is surprisingly easy to do in India. As you might have seen during my recent India coverage, the country is awash in color.

I like casual environmental portraits. I asked Sahana, at times, to look away from the camera, creating a street photography aesthetic. And, although she had a wonderful smile, I tried to keep it in check, generally opting for a neutral expression. 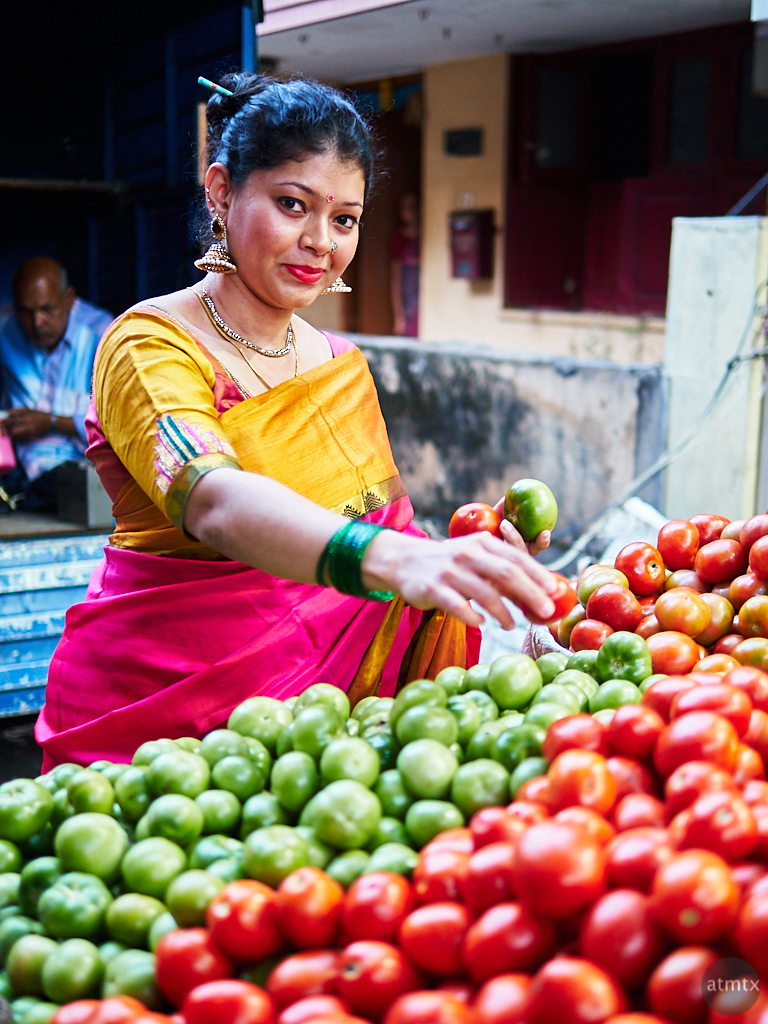 I usually started with Sahana looking away, like in the first photograph, but then asked her to look at me. I was trying to achieve a natural expression, even when the person was looking at the camera.

We started with vegetables, which is the first thing I thought of to add color to the environment. We moved to the smaller streets, away from the stores and traffic. Luckily, the area had a lot of vegetable stands. 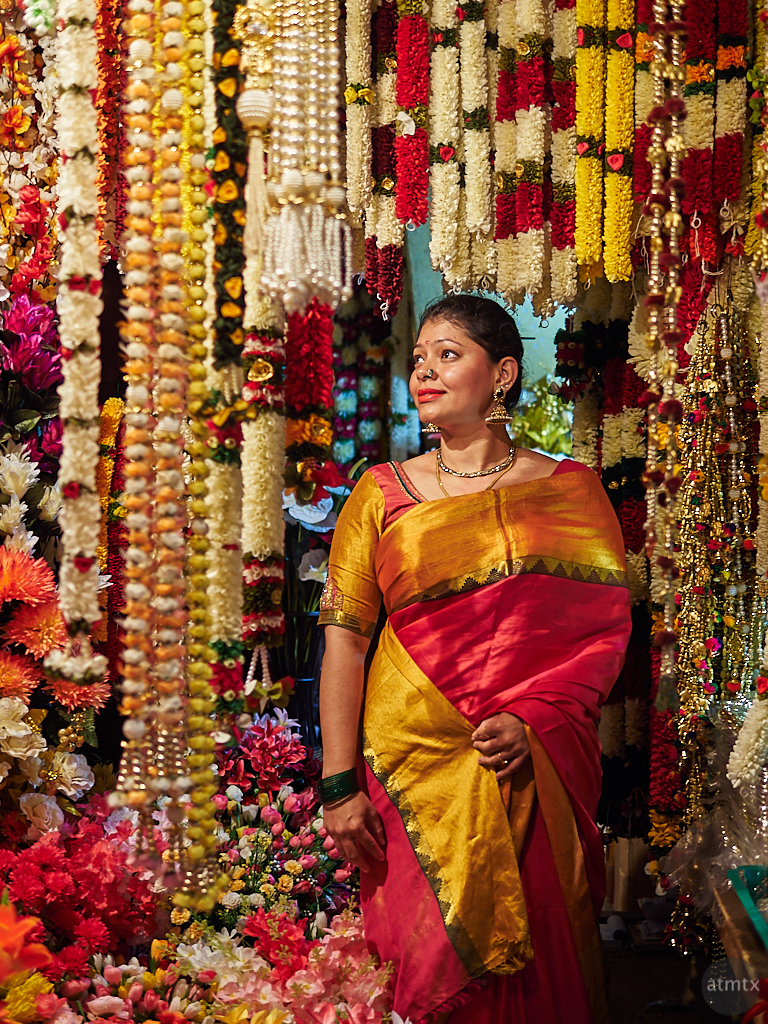 We asked the flower shop owner if we can take pictures for a few minutes. I wanted to frame Sahana with the flower garlands, which maybe the ultimate in background color. 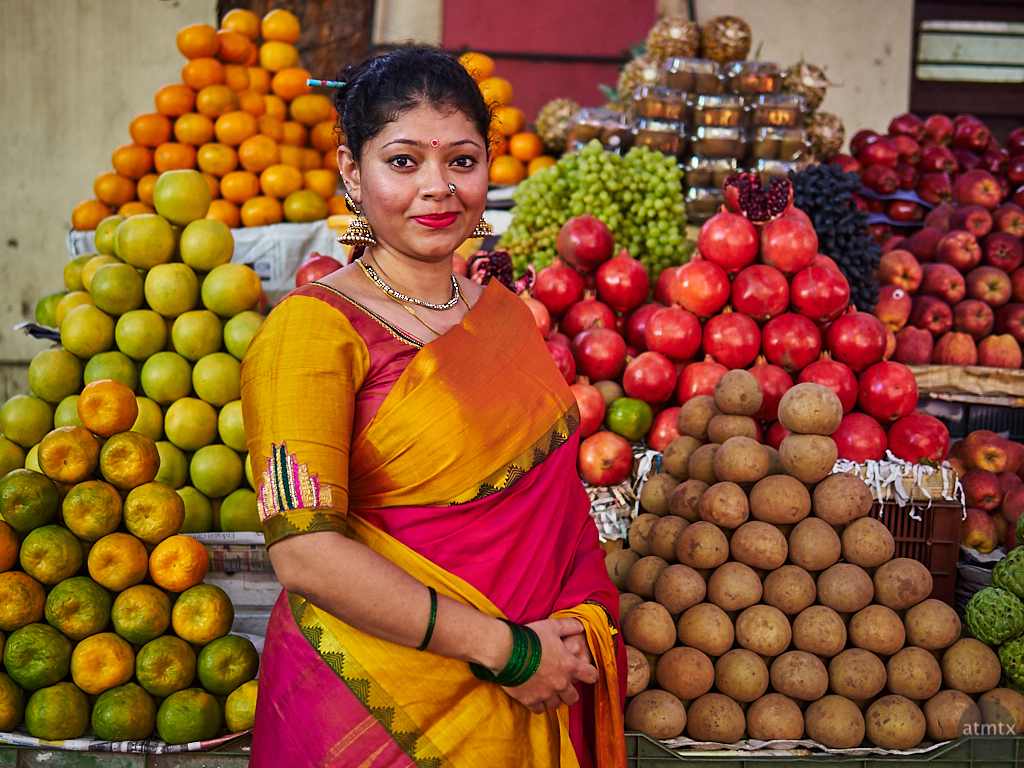 For a country that is generally chaotic, I found the precision fruit arrangement amusing. And, this wasn’t the only stand with this kind of display. Perhaps the individual street vendors have a sense of pride in their small stand and they probably have hefty competition. Anything to improve the aesthetics may result in more sales, I suppose.

I created all portraits with available light and as the evening approached, things could get more challenging. Luckily, I’m use to making low-light portraits, which is the technique I usually employ at Drink and Clicks. I also used my Olympus PEN-F with the 50mm equivalent f1.4 lens. It’s the same camera I use for all my portraits so I’m quite familiar with its capabilities. 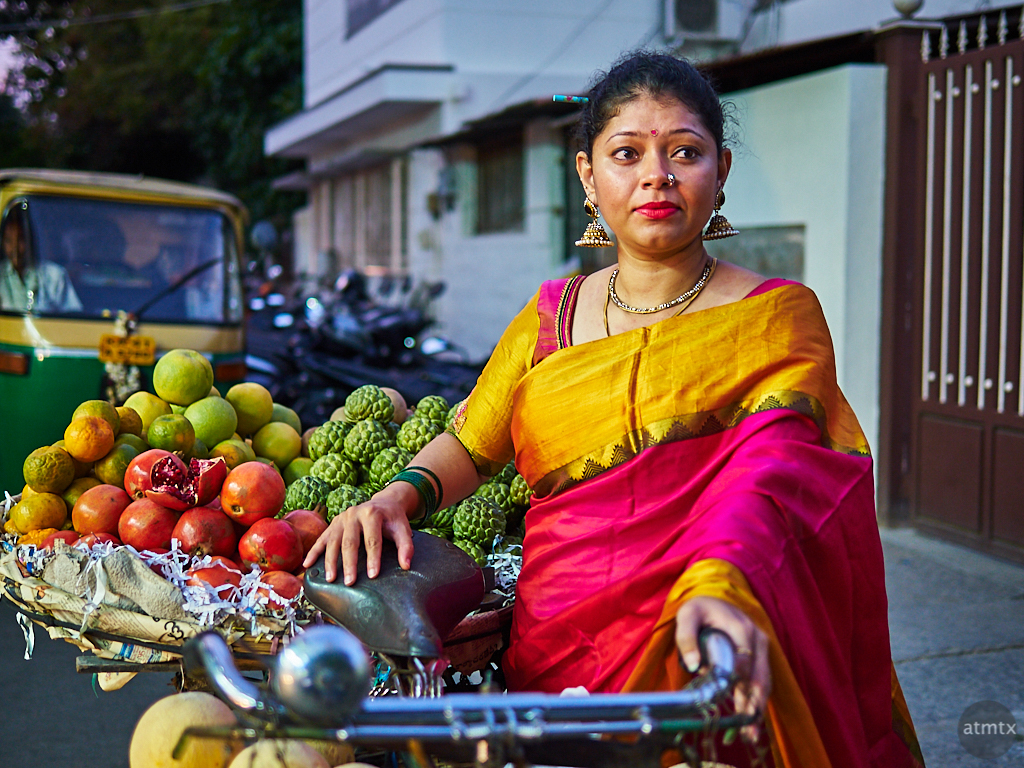 I had Sahana pose with this fruit delivery bicycle. In retrospect, I wish I could have included more the bicycle, though the seat and the handlebars give enough of a hint, I think. As I recall, there were people in the background that I wanted to exclude, which limited my composition.

It was starting to get dark but since I shot this at ISO 400, I must have used a street light for added illumination. 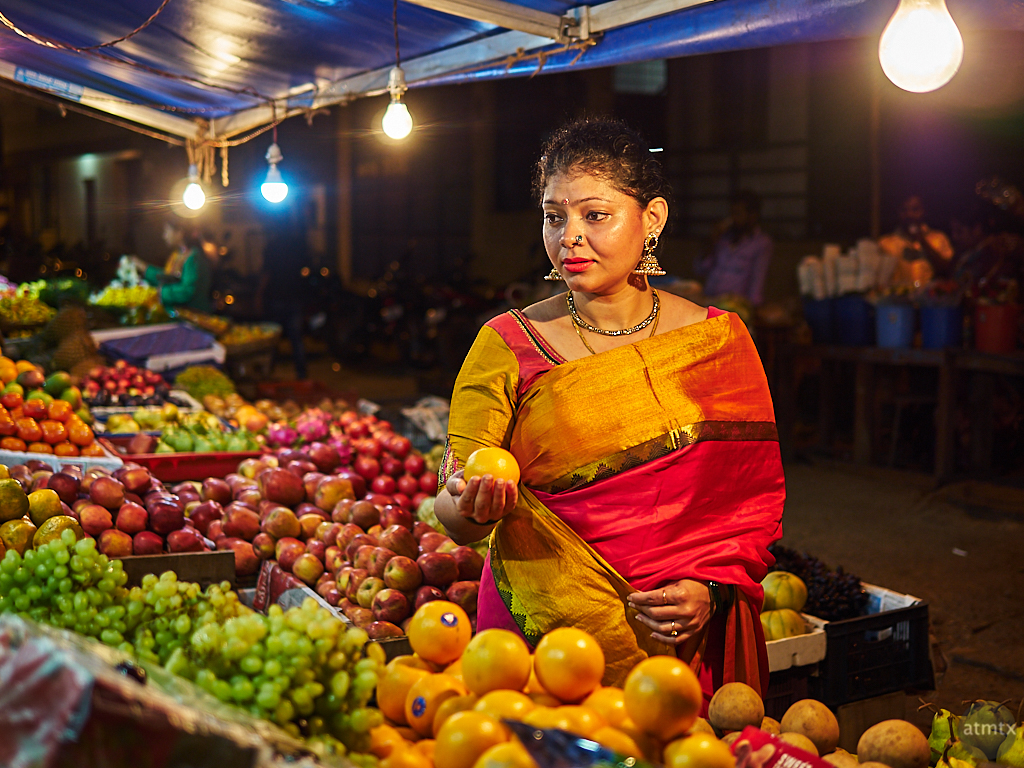 I’m a sucker for bare lightbulbs and I love making shots like this. It’s less than 20 minutes since I made the portrait with the bicycle, so you can tell how quickly it got dark.

These kinds of portraits look tough, but the multiple fruit stand lights made it rather easy. I shot this at ISO 200. If anything, it can get too bright and I ended up underexposing one stop.

I was going for a street photography look here, making it appear like Sahana was shopping for fruit at this night market. 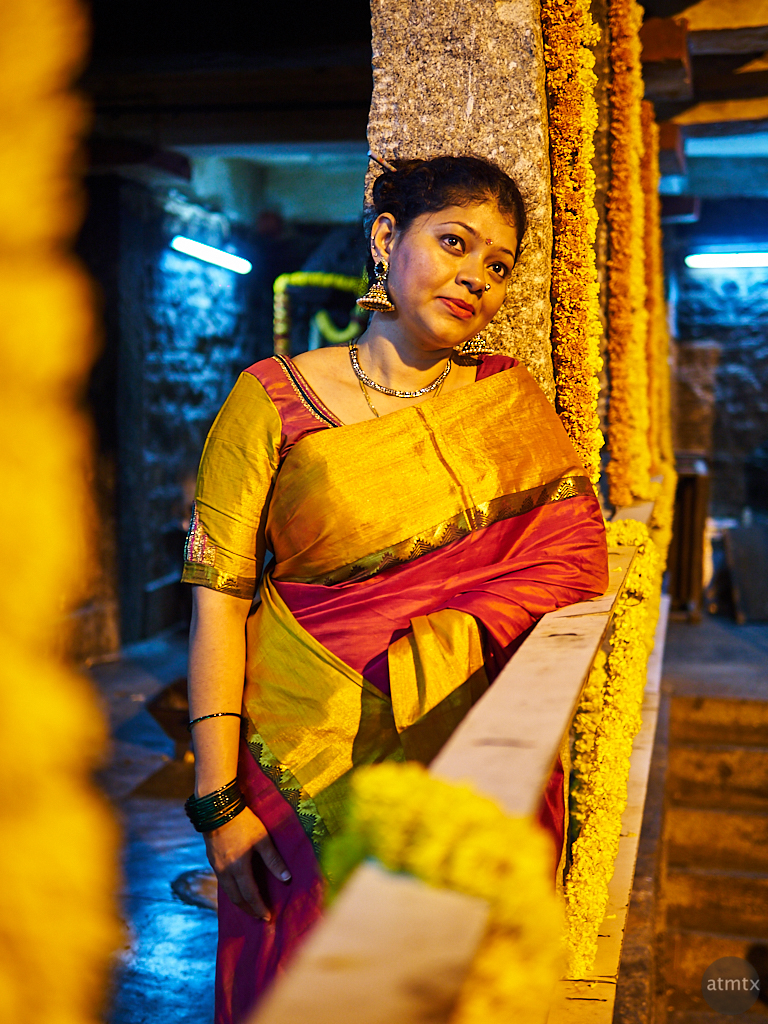 For our final location, we went to Malleshwaram Temple Street and as the name suggests, there were many temples next to each other. Sahana, familiar with the area, chose Nandi Theertham Temple.

The golden light is courtesy of artificial temple lights, which made shooting here easier than you might expect. I shot at ISO 400 at 1/40 of a second at f1.4. I like the contrast of the foreground warmth with the bluish fluorescent lights in the background.

Notice the yellow flower garlands that are strung on the pillars? I suspect, they were bought at a place like the KR Market. Someone asked me what they do with all those flower garlands. They are used in various ceremonies both religious and non-religious and at weddings. Apparently, they are also used to decorate temples.

I took at couple of other noteworthy portraits, which I’ll reveal in the subsequent days. But hopefully you got a good feel for the photo shoot. As you can imagine, I had a blast and Sahana was wonderful — the entire shoot turned out better than I expected. And, while I shot with three cameras when I went through KR Market, using one camera for this photo shoot made it easier and less hectic.

7 thoughts on “A Photo Shoot with Sahana”