After a full day of shooting, doing street photography at the KR Market and a photo shoot with Sahana, I got back to my glowing and colorful hotel. The Aloft is a U.S. based chain hotel known for its hip and young aesthetic. I’m neither hip or young but I enjoyed it, nevertheless. The hotel doesn’t take itself too seriously and is not overly fussy, but still has all the necessary amenities. The guest room is efficient with a comfortable enough bed.

It was nighttime and the color, glow and reflections attracted me immediately, reminding me of the urban landscapes that I love so much. I busted out my camera one last time — the small one, the Canon G7X Mark II.

While I like the G7X Mark II in general and used the heck out of it for the last year, I found at times that the JPEGs can look a lot better than the RAWs, even with post processing. There is a lot of sophisticated JPEG processing the Canon uses on this camera, some of it to offset the inherent optical distortion. For these photos, I opted to tweak the JPEGs, which I liked better.

Yeah, that’s an airplane. A real one I think, mounted on the ceiling. It makes a statement at the entryway.

I shot most of the photos at 1/10 of a second to get the lowest possible ISO and highest quality.

I noticed a lot of younger customers in the Aloft lobby, though on this Sunday night, it was relatively quiet. During my stay, they had a couple of corporate holiday parties that really livened up the place. They also had a performer singing covers one day, who was surprisingly good. 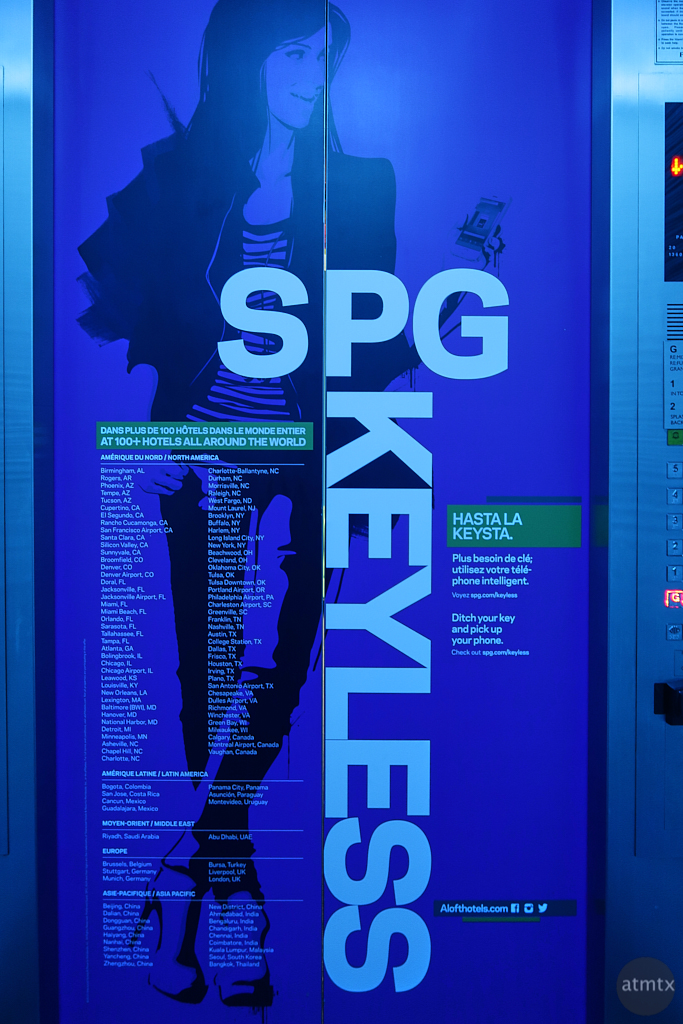 This the inside of the elevator, where they were advertising their keyless smartphone based system to open your guest room. I just used a regular key card because I’m not young and hip and I know better. They have a lot of hotels, including in Austin, which surprisingly now has three. These hotels are part of the Starwood SPG group which is now a subsidiary of Marriott.

Finally, here’s more of the lobby, and the bar in the background. I didn’t spend any time at the bar, though I did eat breakfast and lunch at the Aloft restaurant.

One thought on “The Hip Aloft Bangalore at Night”