I moved hotels, mid-week, during my trip to Bangalore. I was visiting another company closer to the middle of the city. Because the traffic is so bad, it would take one and half hours in the morning, from my previous hotel. So I checked out of the Aloft and into the ITC Gardenia.

I enjoyed the Aloft perfectly well. It was fun and modern without a lot of fussiness. The ITC Gardenia is completely different. It’s a luxury hotel, though with none of the feared stuffiness of an upscale place. I had the option to stay at the JW Marriott, but prefer the Gardenia. While the JW in Bangalore is a fine and fancy hotel, there’s nothing about it that says India. As you will see from the photos from ITC Gardenia, it has a uniqueness that better echoes the country.

Upon check-in, the host draped a vibrant purple scarf over my neck. She said it was the old customary way to greet visitors, especially when entering a special place. Moi, the host on the left, along with a bell hop, personally took me to my room. I was surprised at the level of service at this large hotel.

This is actually my second stay. Six and half years ago, when I first visited Bangalore, I also stayed here. I don’t remember getting a personal guide to my room, however I did get a scarf. It was an orange one, which I still have after all of these years. 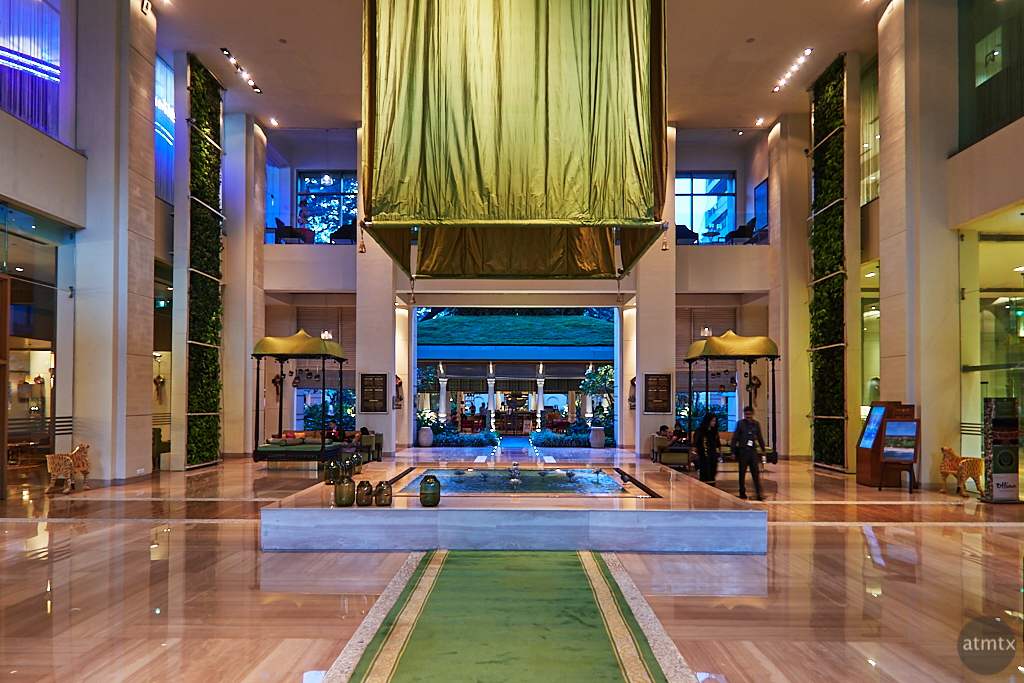 This is the lobby, which you might notice is open to the outside. Past the opening at the back, you might make out a pavilion which sits in the middle of an inner courtyard. Despite the cool temperatures, the lobby was comfortable with fresh breezes that flow through. I’m sure it’s there, but I didn’t notice the air pollution and the smoke that I’ve noticed throughout my stay in Bangalore.

This the pavilion which you can see from the lobby. It’s the same one that I featured at the top of the post, but from a different angle. I believe the pavilion is mostly symmetrical. To the left and right, there are wings of the hotel that have restaurants and meeting rooms. 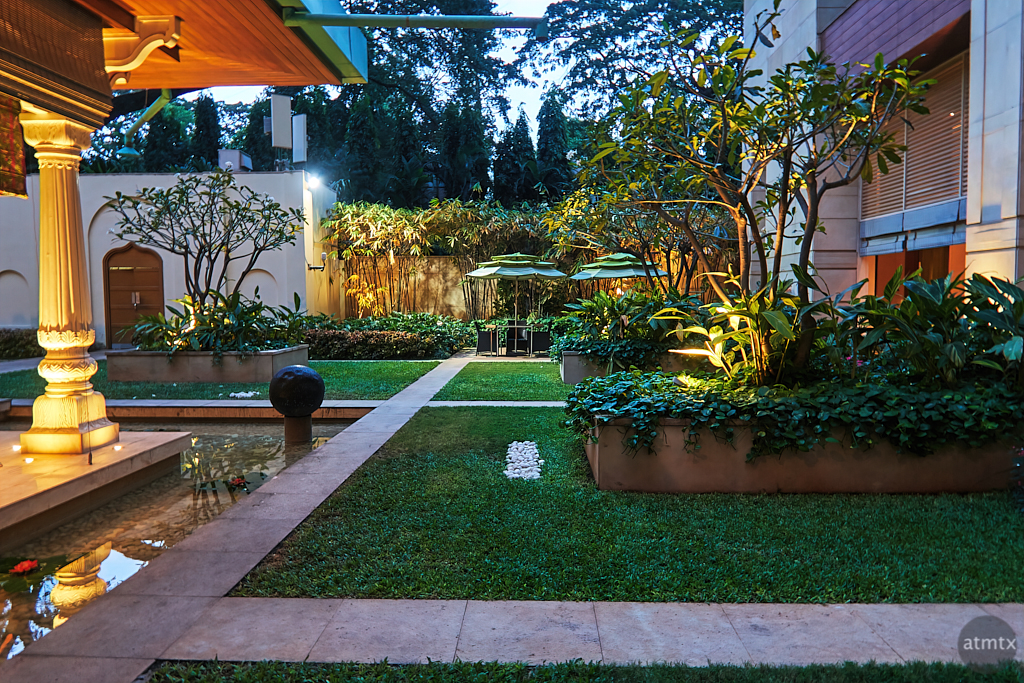 The grounds of the hotel aren’t very large. It’s in the middle of an expensive and upscale area of Bangalore. But there is a lushness with the extensive plantings. This is a small area next the pavilion. There are lots of plants growing through the property, inside and out. I wonder if all these plants are somewhat shielding the occupants from some of that air pollution. It’s also tranquil, like a mini-oasis in a very crowded and bustling city. 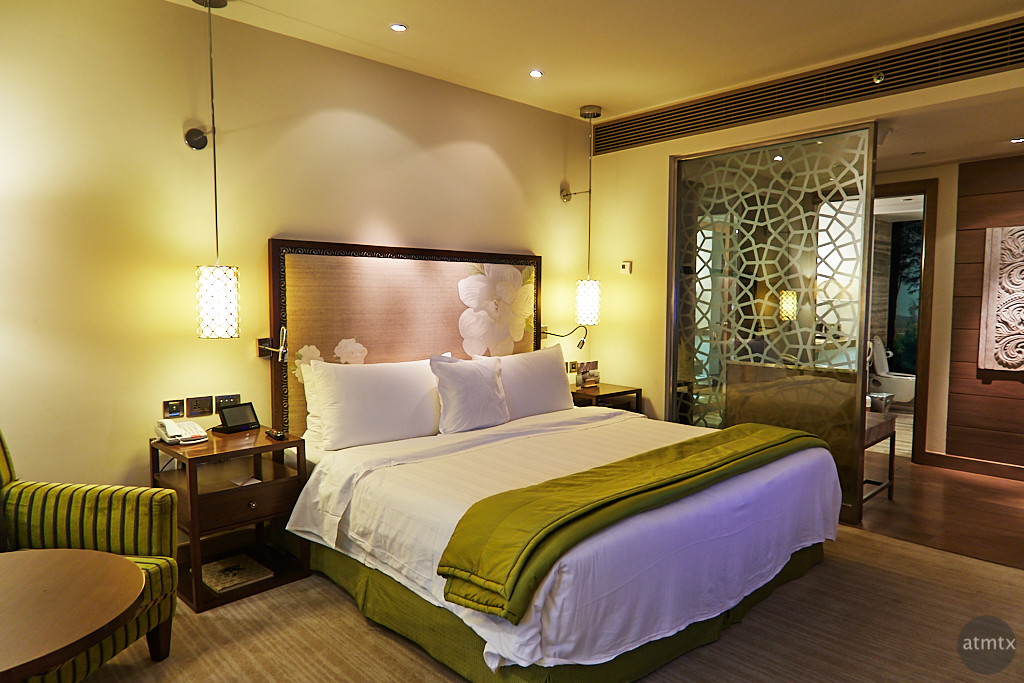 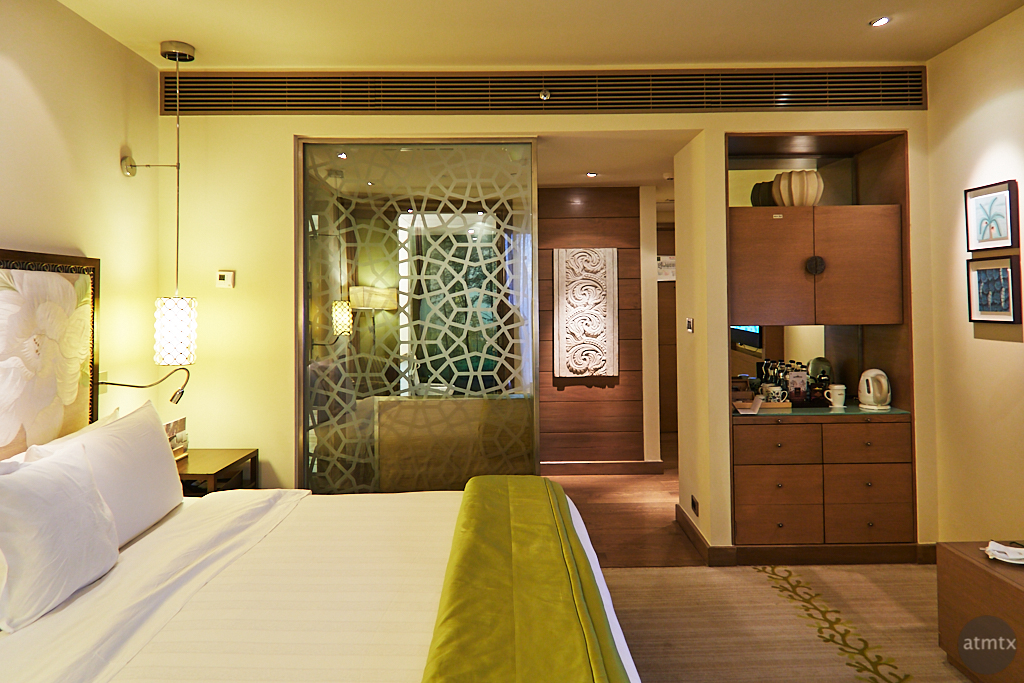 As you might expect, the guest rooms are exquisite. There’s an entry area with a mini-hallway that separates the bathroom from the bedroom. ITC seems to pride itself on it’s eco-friendly credentials and there’s a lot of green in their interior decorations.

I don’t often stay in luxurious accommodations but the ITC Gardenia is probably the nicest hotel in which I’ve ever stayed. But here’s the thing. It’s not very expensive by Western standards. My rate was 9,200 Rupees per night. At around 70 rupees per dollar, that’s only about $130. However, the city hotel taxes are quite high at 28%. Factoring those in, the rate comes to about $168. That’s about the cost of a mid-level business hotel in suburban Austin. Compared to downtown hotel prices, it’s an incredible bargain.

This is the restaurant where they had an extensive breakfast buffet with English, Indian and Asian dishes — included free in the room rate. This is no “make it yourself waffles and institutional scrambled eggs” breakfast from the Hampton Inn. This place was wonderful. The only problem I had was not to overeat. 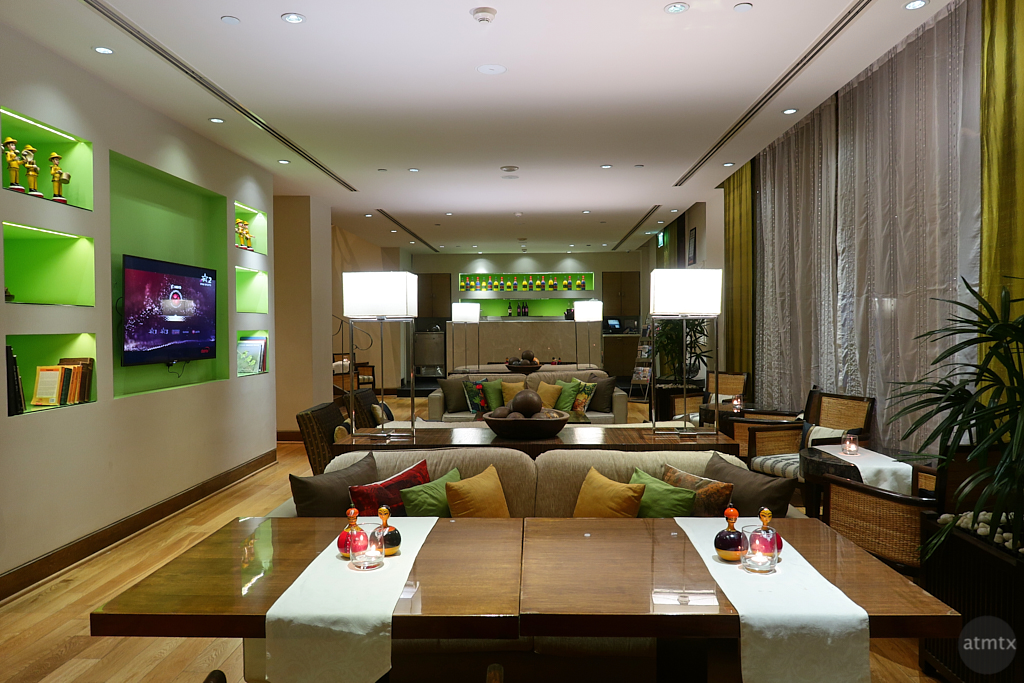 Finally, this room is called the Upper Crust, which is located on the other side of the pavilion from the restaurant. My room rate also included a complementary two-hours of happy hour drinks with hors d’oeuvres.

Surprisingly, the room rate at the ITC Gardenia was not much higher than the Aloft. Maybe a $5 to $10 difference. If it weren’t for the five-minute walking convenience to the company I was visiting, I would rather stay here, of course. The hotel is clearly better with a lot of perks. The Aloft also included a breakfast but was not nearly as sumptuous as this one. And, the Gardenia is located in a better neighborhood, with more to do.

So, if you have a chance to visit Bangalore, see if the ITC Gardenia will work for you. Ironically, the ITC chain was recently bought by Marriott and is now part of their luxury collection. So both the Aloft and ITC are owned by the same parent company. I only stayed here three days, but it was very memorable. I can’t wait to visit again.

2 thoughts on “Living Large at the ITC Gardenia”