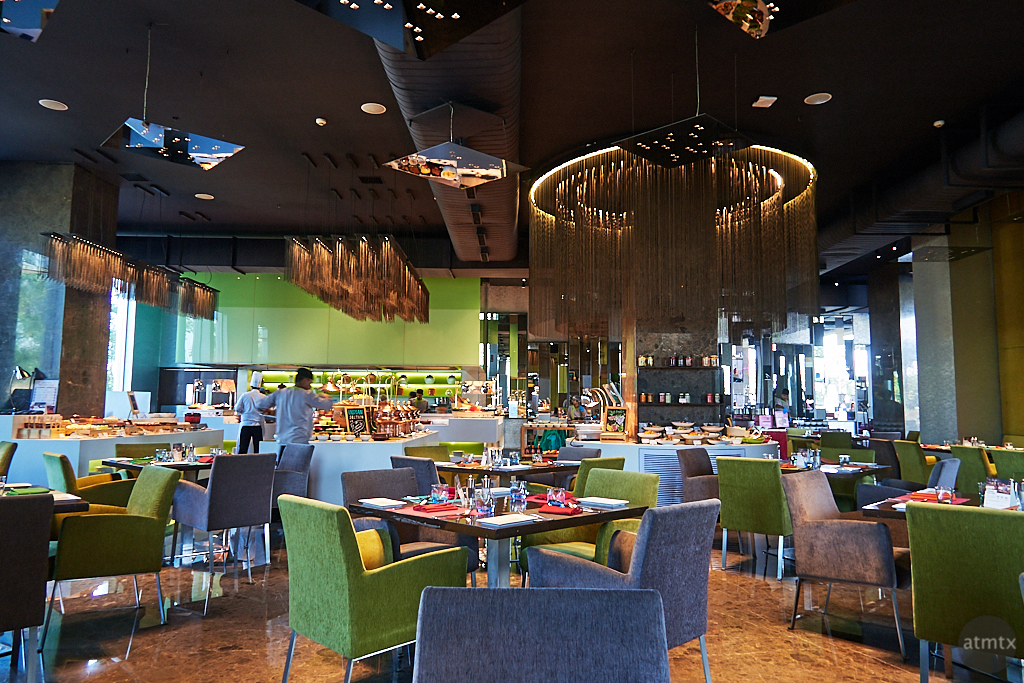 As you can see, the restaurant at the Aloft Hotel, where I was staying, is fully Westernized and modern. In keeping with the Aloft’s youthful style, it’s also colorful and playful. After my hour photowalk, I got back to the hotel just before noon. Rather than taking any chances, on the first day, with street food, I opted for the safety and relative opulence of the hotel restaurant.

I discovered that Indians tend to eat lunch later than in the United States. While it’s not unusual to each lunch before noon in the U.S., Indians seem to eat way past noon — even after 2pm. As I recall, I ended up starting my meal around 12:30.

It was Sunday, and they were preparing a large buffet. It was impressive with a good mix of Western and Indian dishes. My hour photowalk was just a warm up. I had extensive photography plans for the afternoon and didn’t want to be weighed down. I passed on the buffet and ordered a standard entrée.

I ordered Chicken tikka masala, which admittedly is the beef and broccoli of India food. I wanted something that I was familiar with, just to sent the benchmark for this place.

I am no Indian food expert, however, I actually like “Tarka Indian Kitchen” better, which is the modest one-step-above-fast-food Indian restaurant that I go to in Austin. I found the Aloft’s version too mild. I can only assume that they are keeping it safe and catering to the foreign tourists and business people who frequent the hotel. Also, because it’s a fancy hotel, the food was more expensive in India than in Austin. Go figure.

Still, I had a satisfying lunch and was looking forward to my afternoon of street photography and a model shoot. I was going strong after traveling for 24 hours and sleeping for maybe 4 – 5 hours during my flight. Photography gives me energy.

2 thoughts on “Lunch at the Aloft Bangalore”