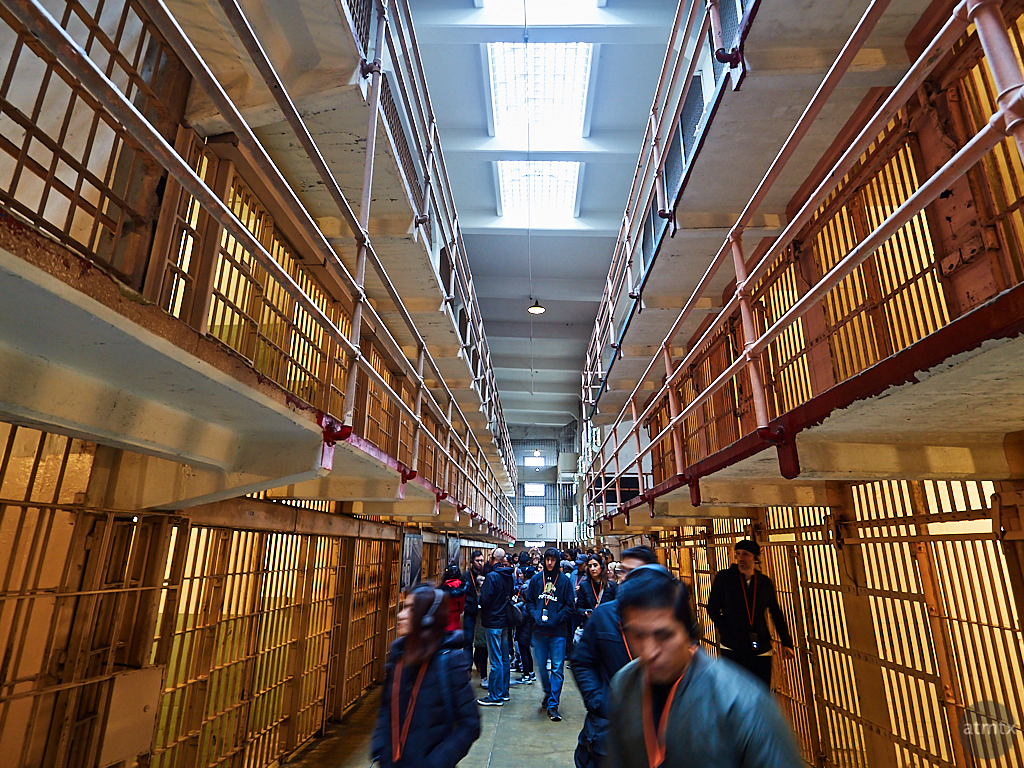 I believe when most people think of Alcatraz, they think of the prison cells. The rows and rows of containers, on multiple levels, where people were locked up.

When I see hallways like this, I naturally think of leading lines. Lines formed by the subject that lead the viewer into the picture. And, leading lines typically look great in wide-angle. That why, when I got to this part of Alcatraz, I switched to my 9-18mm (18mm to 36mm equivalent) lens on my Olympus. That’s what I used to make the photo above.

See how all the lines start converging in the distance? The wide-angle distortion also makes the walls tilt towards each other. I also purposely shot with a slow shutter speed to get motion blur from my subjects.

But just shooting wide-angles in this kind of place is so predictable. I do it all the time. So, I made some more photos, in different variations.

With my compact Canon G7X Mark II, I can make what I call Cinematics, which is a technique I use a lot. There at a 24mm equivalent, but I also pull extra details from the sides and crop at 16×9 ratio, which makes this look sort of like a panorama.

This time, with the same Canon G7X Mark II, I shot in the default 2×3 ratio, but zoomed slightly to a 28mm equivalent. This is the view you see with most smartphones. Though, this one is at a higher image quality, of course.

Zooming in tighter, I’m now at a 58mm equivalent. Notice how the walls are less tilted towards each other.

Finally, I’m at a 100mm equivalent, which is the maximum zoom for the Canon G7X Mark II. Obviously, the people appear a lot larger, with the telephoto zoom. But, we also get a compression effect, where the space between me to the people and to the back wall gets smaller. Also, as we zoom in, the angle of view become narrower.

I’m not standing in the identical spot so you can’t make exact comparisons. However, I think you get the general effect. So at a wide angle, the drama of the architecture dominates. But, with the telephoto, it’s more about the people in a particular space.

I can also shoot in a vertical orientation. I made this one with the Olympus at a 18mm equivalent. Again, I used a show shutter speed (1/8 of a second) to add interest with a motion blur.

Finally, omit all the people, and the image become all about the architecture — it takes on a geometric appearance. When I convert this to black and white, it makes it even more abstract. As you see below.