When I shoot downtown, I almost always drive; I’ve found strategic places to park for free or inexpensively. But during SXSW, downtown can be a mess and with over inflated parking prices. I hit upon the idea to take public transportation this year. While our lonely single train line is the sexy alternative, I decided on the bus of all things.

Our MetroRail service conveniently terminates at the Austin Convention Center, the organizational hub of SXSW. But, I really don’t trust it very much. It may work fine under normal conditions, but whenever I’ve tried it under load — meaning lots of people want to get on — it falls apart. The small train and infrequent service gets overwhelmed. It doesn’t run very frequently, every 30 minutes or so and it stretches to an hour at times.

There’s a fancier bus service now in Austin. Called MetroRapid, these are semi-express buses with limited stops. Some are even double-length with a flexible accordion in the middle. The stops even have a time of arrival status which seems accurate. They also run every 15 to 20 minutes during most of the day. 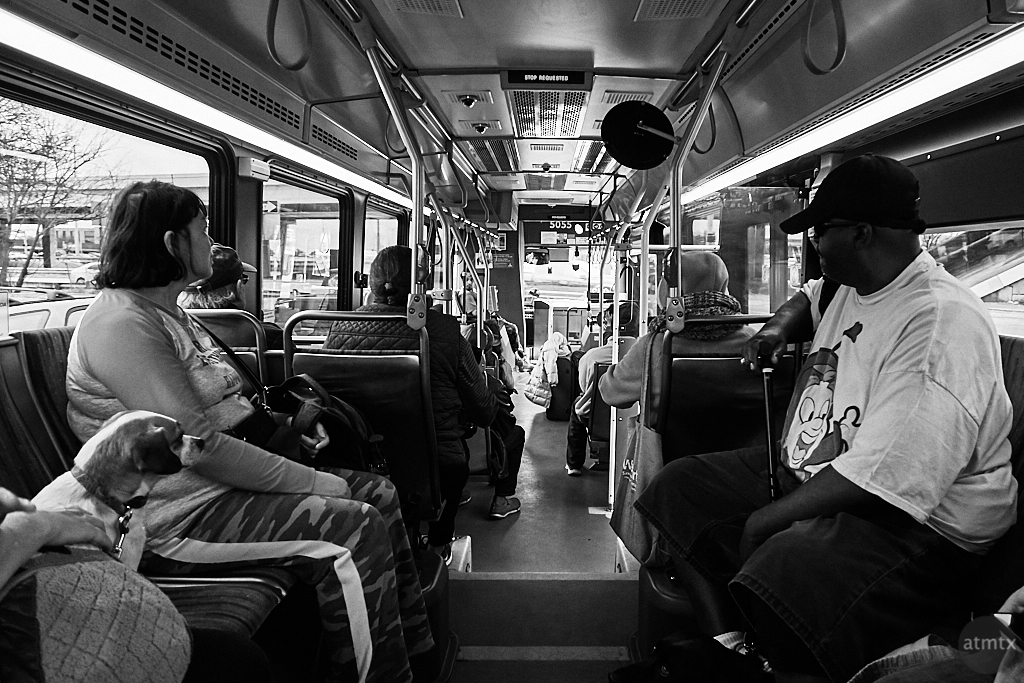 The experience was reasonable. The people watching is always interesting with a good cross-section of citizens. Understandably, there were a few visually impaired riders, mixed in with students and even tourists. One woman appeared be going to a job training, clutching an Amazon new hire invitation letter. I wasn’t trying to be overly nosy, honest. I was standing right next to her and even my less than stellar eyesight revealed the famous logo and the letter.

As we passed through the University of Texas, the student ratio greatly increased and it became quite full. There was only one woman who appeared down on her luck and her large suitcase might have carried her only worldly possessions.

Overall, I would rate MetroRapid higher than my bus experience in Honolulu. They were cleaner and newer. I can pay for MetroRapid with a smartphone app, not having to scramble for rarely used coins as I did in Hawaii. Finally, at $2.50 for a 24 hour all you can use pass, it was a bargain. I took the bus two out of three days, conveniently parking my car at the North Lamar Transit Center. It was only a two block walk the The Belmont, which is where I hung out most of the time.

Not a bad deal. Not to mention, it was a new experience and yet another story for the blog.

4 thoughts on “I took the bus to SXSW”