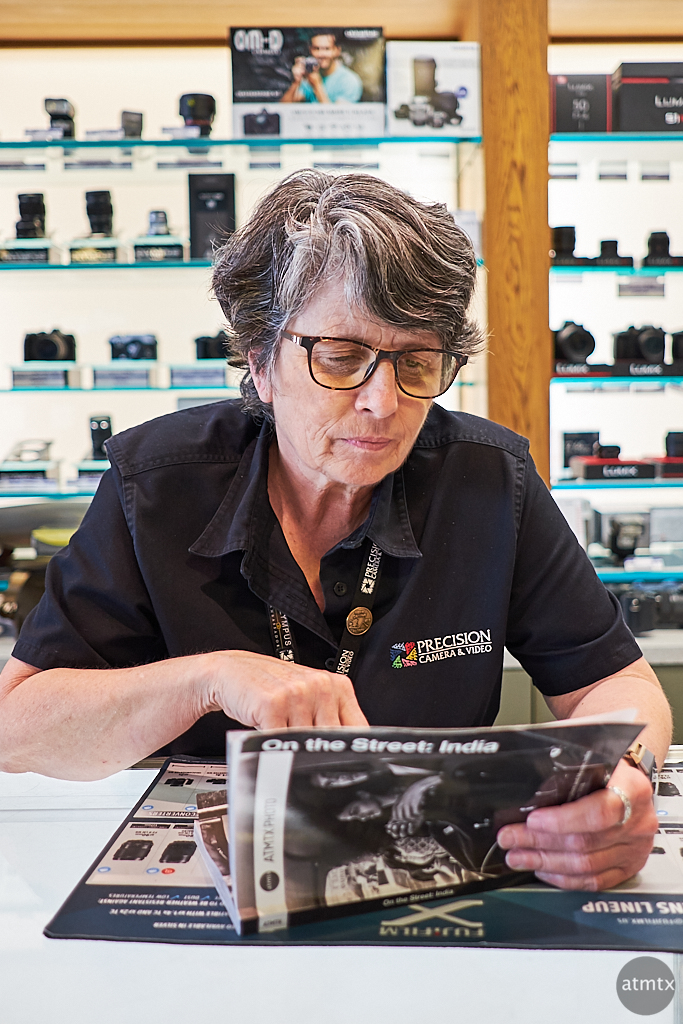 Yesterday, I talked about how I dodged the full frame bullet. After looking, touching, playing, and investigating all the full frame mirrorless options, I came to the conclusion that none of them really met my needs for the price point I wanted. I did discover, however, that Fuji cameras might work for my purposes. To create shallower depth of field portraits than I can with my Olympus.

It’s as though the photo gods have decided that I needed to explore the Fuji path. The timing couldn’t have been better. Just a couple of days after I did all that analysis on Fujifilm, something interesting popup up at Precision Camera’s used camera department. Something that might have a profound impact on the gear that I’ll be using.

There it was, an old but nearly pristine Fuji X-T10 for only $275. I went into analysis mode yet again. While I was getting acquainted with the newer X-T20 and X-T30 models, the X-T10 was something I never considered. A four-year-old camera with certainly inferior specifications.

What I learned, however, was the X-T10 can still be a viable camera. The physical size and shape are practically identical with the newer X-T20 and X-T30. It was 16MP, which was more than enough and has a slower and more basic focusing system. All the research and YouTube videos seem to confirm that it should be adequate for my needs — for portraiture and street photography.

Inches away in the same cabinet, another fine Fujifilm specimen, in equally pristine condition. A well regarded 23mm f2 prime lens. The two would make an excellent pair. Fujifilm experts will know that I’ve basically created an interchangeable lens version of the Fujifilm X100T. Same sensor, similar focusing system, 16MP, and the same 35mm equivalent focal length. At less than $700 together, both were comfortably under current market prices.

You may not know that five years ago, I shot nearly 30,000 frames with a Fuji X100S, the precursor to the X100T. I had a love-hate relationship with that camera. It was still buggy in certain places and the focusing system was rather slow. Still, that camera had a profound impact on my photography. Forcing and training yourself to see the world 30,000 times through that same focal length, strengthens one’s composition. And, the retro aperture and shutter dials inspired me to branch into old film cameras.

It was only after a year of hard-fought Fuji work that I switched back to Olympus, first using the OM-D E-M5 Mark II and later adding the PEN-F. By almost every measure, the Olympus is easier to use and enables outstanding photographs. It’s built better, it’s faster, more refined and has that all-important in-body image stabilization. It’s like driving an elegant, modern car with automatic transmission.

But, there’s a reason people still like old sports cars with manual transmissions. Sometimes, enthusiasts want the harder and potentially more rewarding road to take. That’s Fujifilm, I think. Especially the older ones like the X100S, X100T and yes, the X-T10. The controls are retro, the focusing system is slower and basic, and no niceties like in-body image stabilization. It takes more work to make good photos with the Fuji. But, if you do, it can be more rewarding.

Often, when I use another camera it changes my perspective and I shoot differently. My Pentax Q7 got me loving super contrasty black and whites. The Olympus PEN-F refined my black and white vision. Small point and shoots gave me the courage to shoot boldly on the street.

So that’s the romantic, enthusiast story I tell myself as I dipped my toe back into the Fujifilm world. I shot the photo of Tamra while I was testing the X-T10 and 23mm f2 combo. She was nice enough to carefully look through my India Book of Street Photography.

In fact, you may have not realized that the past twenty-two posts where all shot with the Fuji X-T10. I was purposely keeping it quiet, but not hidden. People who have subscribed to my monthly newsletter, however, already knew of my major excursion into Fujifilm.

So what about Olympus? Well, that’s a topic for tomorrow’s post.

6 thoughts on “I’m Jumping Back into Fujifilm”