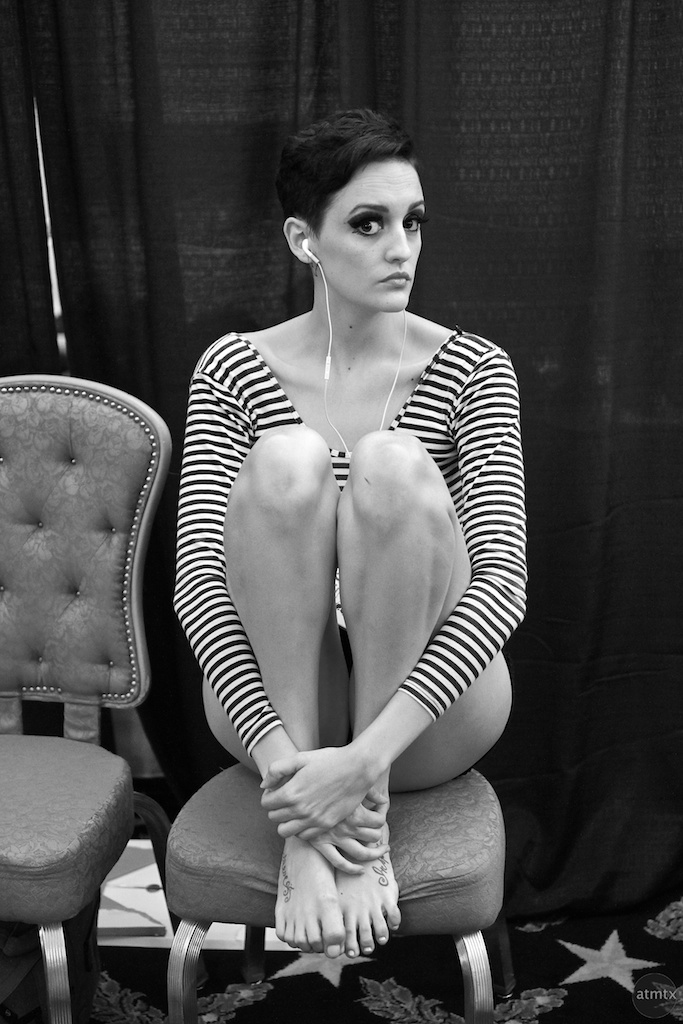 I’ve posted a bunch of entries this year from Austin Fashion week. All the events that I blogged about were free, open to the public and held at local salons. It was good fun and a great way to practice my portrait taking skills. For the first time, with the help of the fine folks at AZIZ Salon, I gained access to a major Fashion Week Event. It was held at the fancy and historic Driskill Hotel in downtown Austin. Unlike the Salon events, this one costs $60 to attend. In exchange for access, I shot the event for AZIZ.

I was granted special access to the back room where I shot behind the scenes photographs. This was where the models were being “prepped” for the big show and where AZIZ Salon did the hair styling. I was probably there for about 30 minutes and had a blast shooting the models during their transformation. It almost felt like street photography and I shot it in that style and even turned the images into a classic black and white. 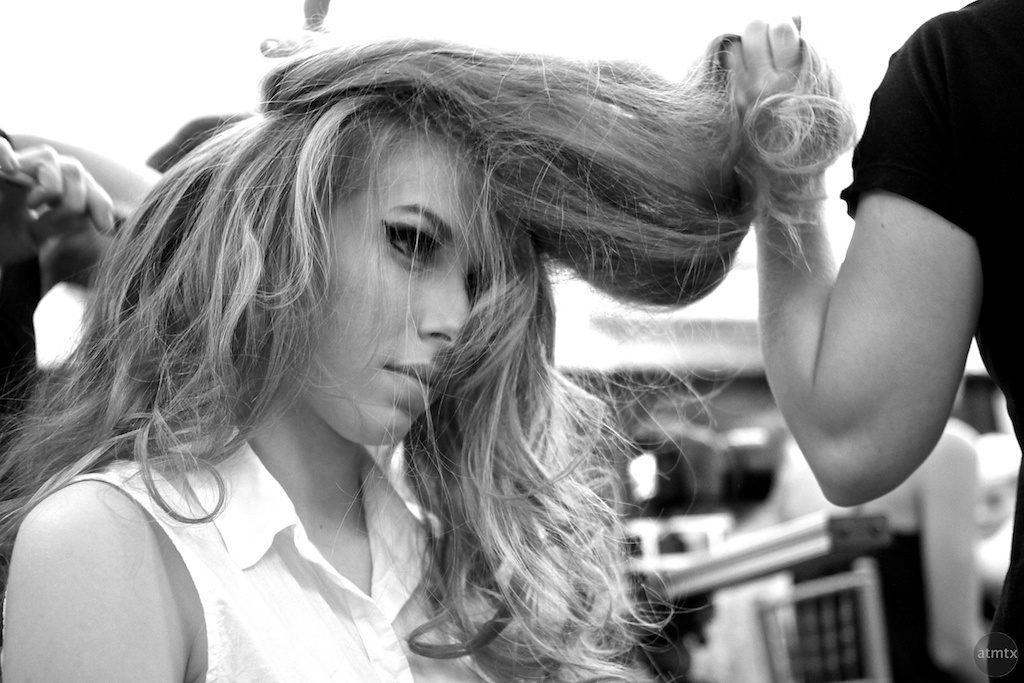 I also got access to shoot the runway show. There was a small 10 foot by 8 foot raised platform, at the end of the runway, where all the media people were positioned. I was one of about a dozen people packed on that stage. There were still shooters from news organizations and video cameras from the local TV news crews. Everyone was very respectful even friendly as we shared this small area. I’ll talk more about the runway portion in another post. Today I wanted to showcase the behind the scenes photographs. A big thanks to Kellye King for getting me into this event. She directs Public Relations for AZIZ and is responsible for much of the marketing and event production. 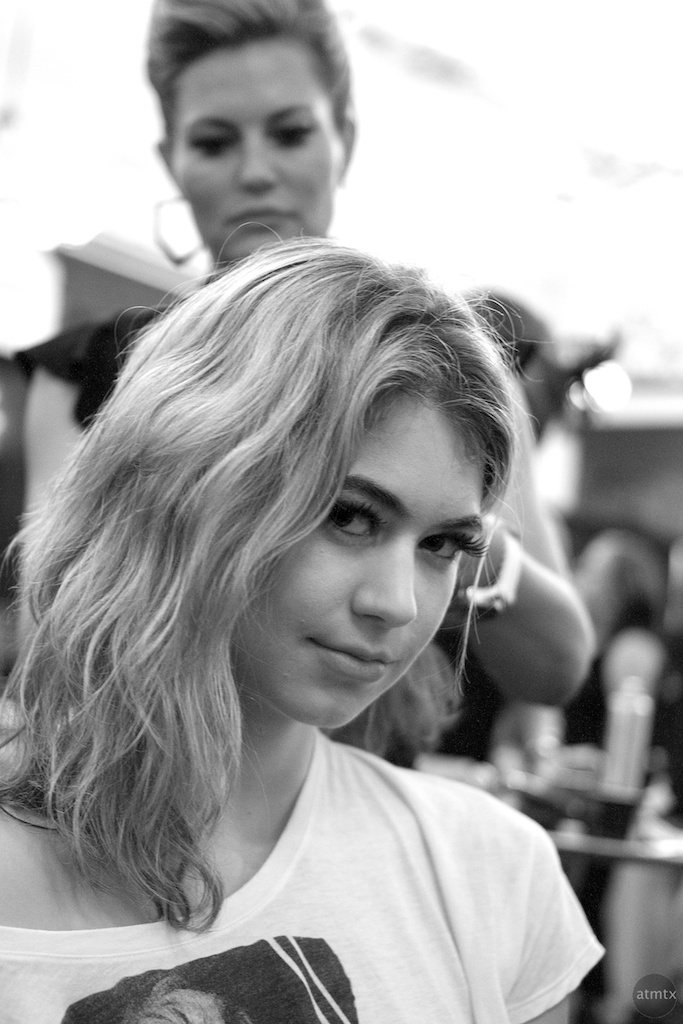 Like my other Fashion Week events, I used my Canon 7D. I had 3 lenses, my 70-200mm f4 IS, the 35mm f2.0 and the 85mm f1.8. I brought the 35mm specifically to use behind the scenes. I briefly considered bringing my 50mm instead but decided that the 35 will work better in tighter spaces. I think I made the right call. I also considered using a bounce flash but the ceilings in the ball room where really high and painted yellow. A bounce flash didn’t work well and the yellow color cast created by the light bouncing off the ceiling was a bit nasty. I decided to use the 35mm with a big aperture and a higher ISO and no flash.

Shooting the back room was fun. I found it quick and easy. Sort of like a combination of street photography with a bit of event photography thrown in. I purposely wanted that unposed photo-journalist look, catching the models and the stylists in action. Ideally, I would blend into the background so that my subjects would not realize that they were being photographed. For the most part I succeeded or they just ignored me, which worked out great. While I used the 7D, I think my Olympus E-P3 with the 20mm f1.7 would have worked just as well. I didn’t want to bring a lot of equipment so I decided to stick with just the Canon for that night. 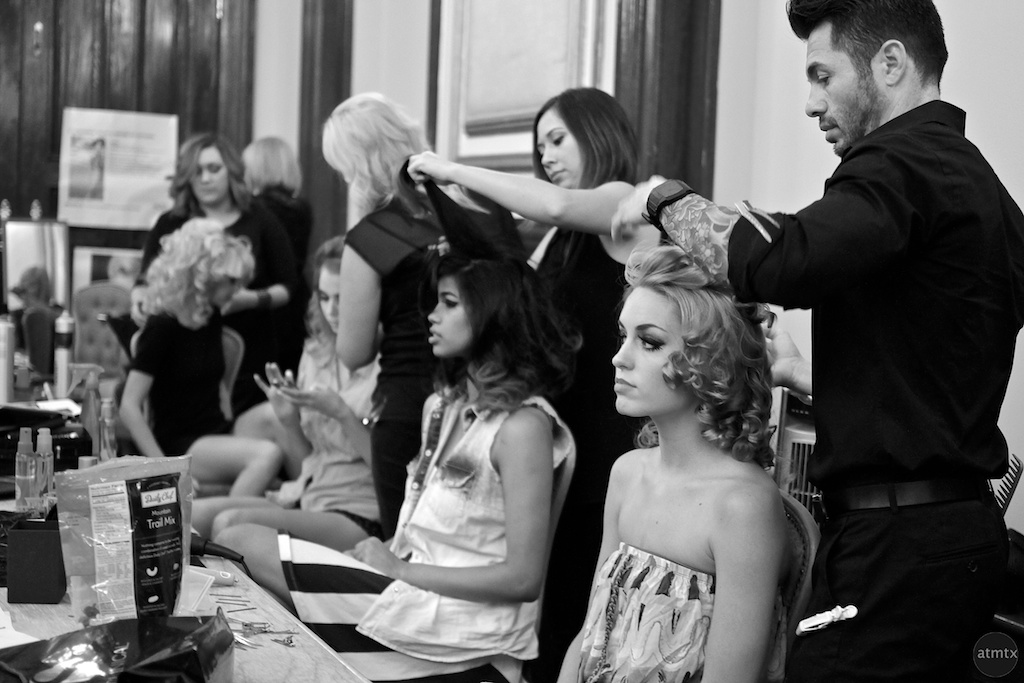 I culled my favorites down to about 50 images. The actions shots of the hair and makeup were important but I really liked catching the models in their relaxed state. Some sat there zoned out, others were lost in their music. I posted a small sample here but you can see more behind the scenes photographs at AZIZ Salon’s Facebook Page.

Please make sure to click on the photographs to see a larger image and hover over the photos to see the exposure details.

Update 9/10/2012: Here is a montage of photos taken at the event. It’s not a complete collection but it gives a nice flavor of the type of images I created.

7 thoughts on “Austin Fashion Week, behind the scenes”