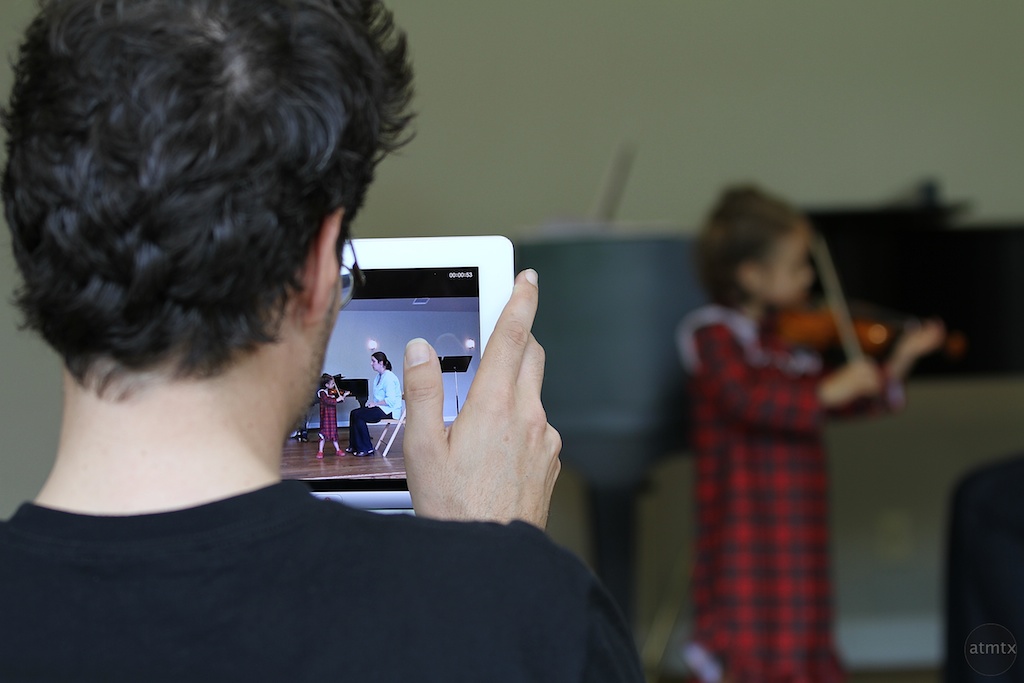 Shooting with the iPad has become common

A lot has been written about how smartphone cameras have decimated the point and shoot market. It’s actually worse than that. Most regular people, non-enthusiasts, don’t really want to use DSLRs — they’re just too big and cumbersome. I see former DSLR owners just bag it and end up using smartphones instead. But how about people like me, the crazy, passionate photo enthusiasts. What are we doing?

Well, we are falling victim to the “good enough” mantra too.

I see two distinct groups of photo friends. Some diligently continue to use DSLRs for their serious work and then flip over to an iPhone when capturing casual snaps. I got a laugh when we go on photowalks. We all have expensive, sophisticated gear and we end up taking group pictures with an iPhone. These people are the same as the masses, documenting their world on smartphones. Except, for their serious pro or hobby work, they break out the DSLR. It’s like they have two distinct modes.

The other group, which I’m a part of, have embraced mirrorless cameras or even premium point and shoots. They may still own a DSLR but use it infrequently. These people tend to use tweener cameras (between DSLRs and smartphones) for both their serious and casual work.

Which ever group you’re in, there is no right way, of course. And I’m sure there are some people who don’t fall conveniently into either camp. The point I’m trying to make is that it’s going to get even harder for camera companies. Most cameras, especially under typical conditions, are now good enough. People know this. There is no longer a pressing need to update to the next model. The camera and sensor companies have done too well. They are perfecting themselves out of business.

So what can these companies do? There are still a few under served niches. Sony is the first to the mirrorless full frame game. Perhaps some others will follow. There is the retro camera movement that Fujifilm is leading. Nikon has followed with their Df. But ultimately, as the market saturates, these companies need to be in the aspiration business.

Leica is not really in the camera business — it’s in the aspiration business. They are selling the dream of the ultimate German pedigree, engineered and chiseled to physical perfection. People buy their cameras because they are rich enough to do so. It’s a badge of honor, like a premium automobile. Just go into one of their boutique Leica stores and you will see. Leica M is no longer the working photographer’s tool.

Fujifilm is moving into the aspiration business with their X line. They are the new Leica in spirit, with smaller, range finder like cameras that harken back to the street photographers like Cartier-Bresson. People romanticize the notion of having a simple camera with one or two lenses and perhaps use it to travel to exotic destinations. It’s also the anti-DSLR. People are proud of this and identify with it.

Olympus is also similar to Fuji and with the benefit of a rich history building smaller cameras. Both their film Pen and OM SLRs were smaller than the competition. Though not as blatant as Fuji, Olympus has also tapped into the nostalgia game. They are also anti bloated DSLR. With the E-M1, they can now tout DSLR performance in a smaller, better made package.

Panasonic suffers because they lack pedigree in the camera business.They are a consumer electronics company. Sony is similar but has done better by pushing the envelope on technological innovation and by buying Konica – Minolta. Sony is the most daring in design too. But they also seem lost, their camera lines, confusing.

Finally, the old guard, Canon and Nikon are already in the aspiration business with their DSLRs. What are they selling? The notion of the professional photographer, with the big, black DSLRs. For people who buy into this image, the bigger the better. They add battery grips to pump up their machines. Big zoom lens, especially the white variety to look even more Pro. Real professionals do use these cameras but the majority are amateurs with the aspiration. Except the wannabes have found that it takes more than equipment to become professional.

Are DSLRs enough to sustain Canon and Nikon? Are mirrorless cameras a big enough business? I suspect some downsizing is inevitable in the camera industry. These companies seem to be structured for the fast growth days when people switched from film to digital. That once in a generation trend is now over.

18 thoughts on “Camera Industry: the trend towards “good enough” is affecting enthusiasts too”