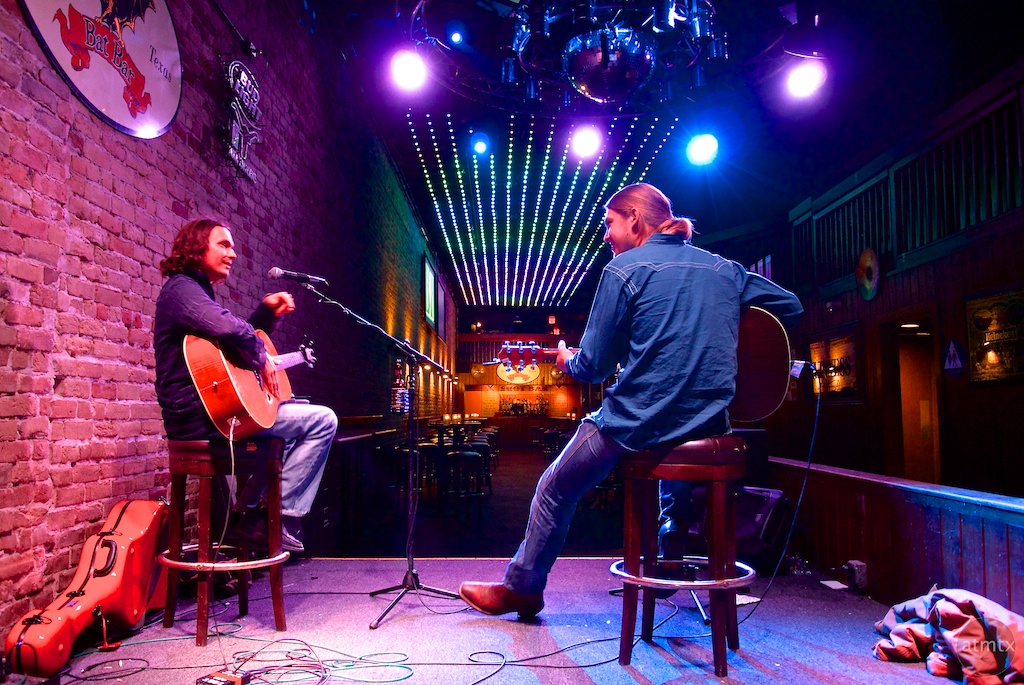 I had my doubts. Shooting at night with a f3.5 to f5.6 lens is not what I typically do. But that’s all I have, the kit lens on the Nikon J1. You know that I wasn’t going to be content just shooting around at Costco and in restaurants. I wanted to see what my newest camera can do.

It was Wednesday, I called Tony for a downtown photo walk. It was a good way to catch up with a friend and test out a new piece of gear. While I inevitably hit 6th street, I explored the area just south, near the convention center, first. Surface parking continues to transforms into hotels and tall buildings. It’s nice to see the city filling in.

A f3.5 – f5.6 lens is pretty slow, at least compared to what I’m used to. On the Olympus and Canon, I usually shoot with prime (non-zooming) lenses with f values from 1.4 to 2.8. Even on my point and shoots, the zoom lens starts at f1.8. To put this in context, the Nikon 1 kit lens, like most kit lenses are 2x to nearly 8x less sensitive to light. That means you have to bump up the ISO or slow down the shutter to compensate.

I did both. I reduced the shutter speed to as low as reliably possible to hand hold. Luckily the IS, image stabilization, is quite good on the lens. While I started at 1/15s, I continued to lower it and settled at 1/10 of a second. Most striking about the camera, the focus almost always locked on quickly and accurately and almost all shots were rock steady even at these slow shutter speeds. Very nice. 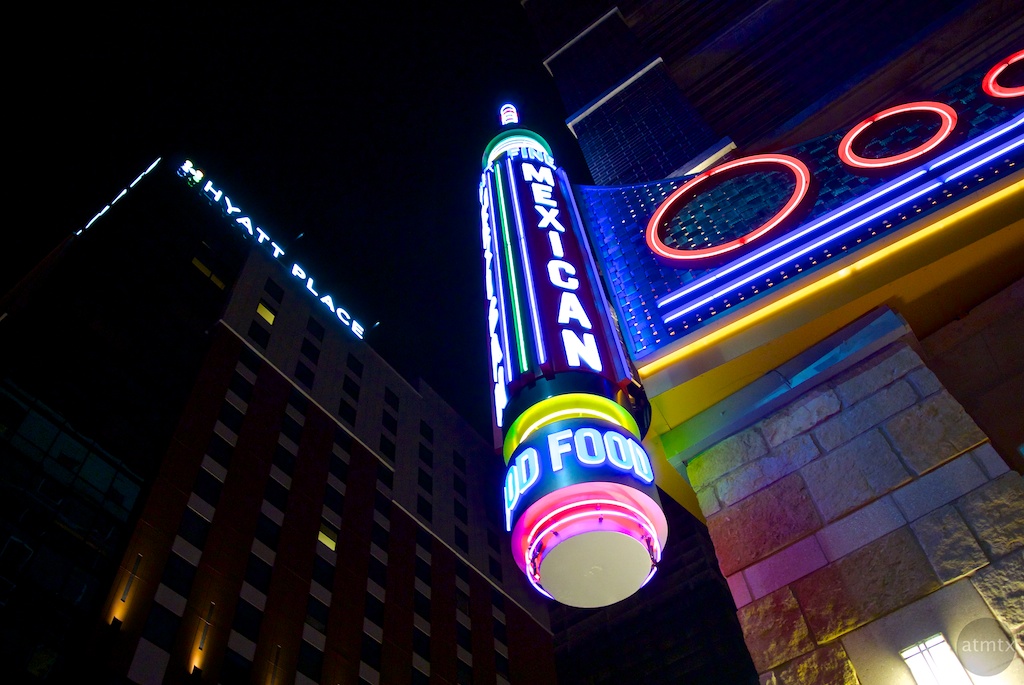 The area near the convention center is filling up with new hotels. I found this nice bit of neon within the new development. 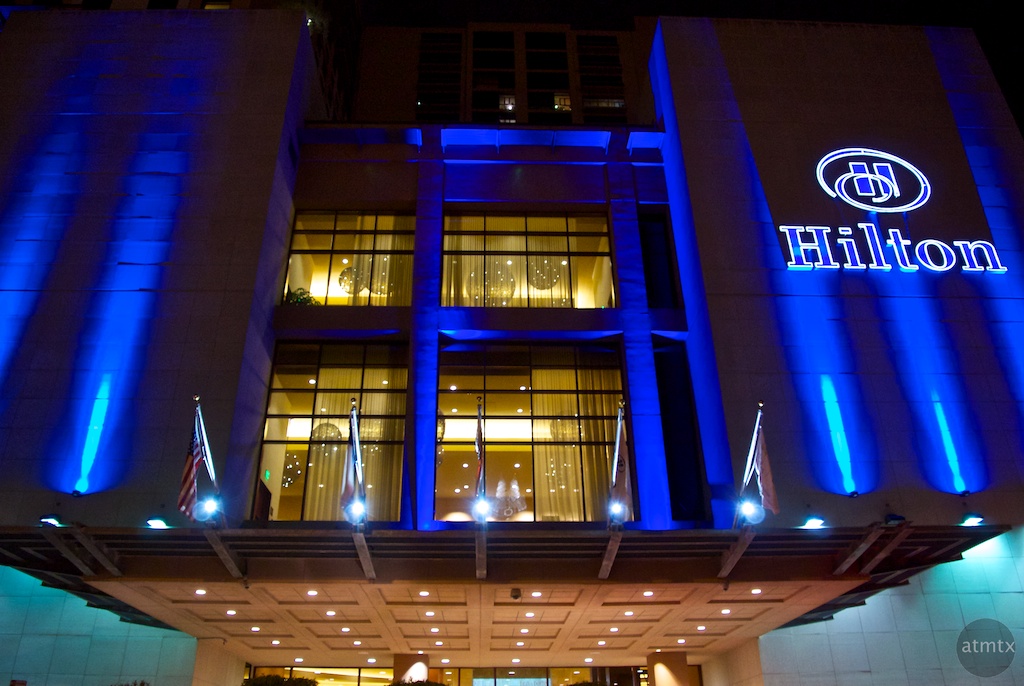 The Hilton is the big hotel in the area until the 1000+ room JW Marriott is completed next year. There are plans for another 1000+ room hotel too, the Fairmont. That one’s going to be interesting, if they build it. It’s supposed to be 50+ stories tall. 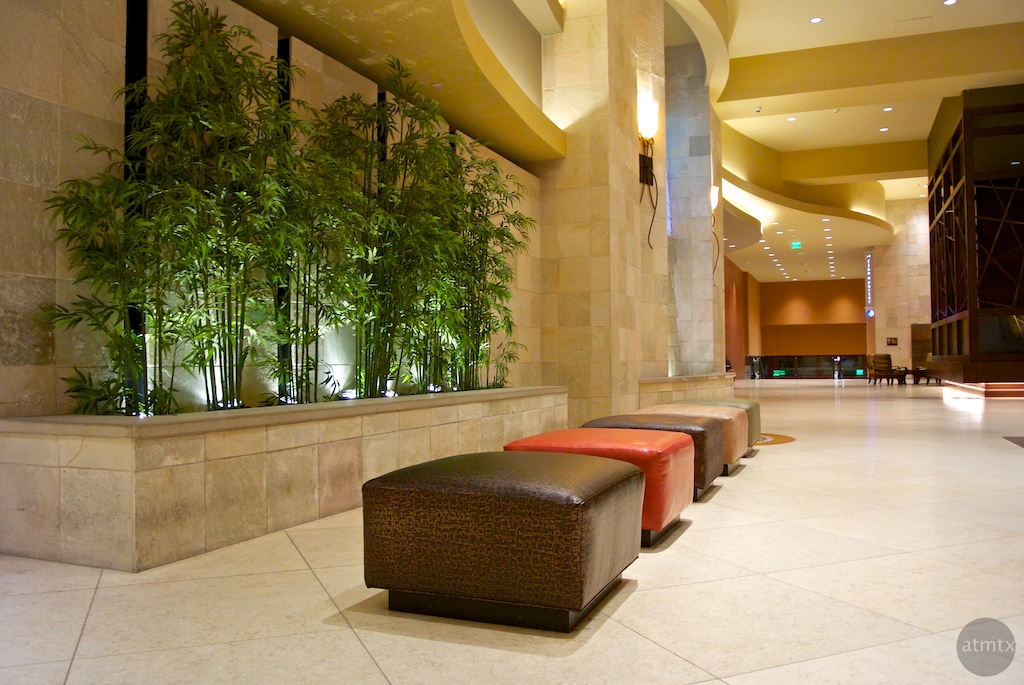 The interior of the Hilton is huge by Austin standards. You can tell it is geared towards conventions.

The last stop of Austin’s train is in front of the convention center. I thought the red ceiling made the ticket booth look a little festive. 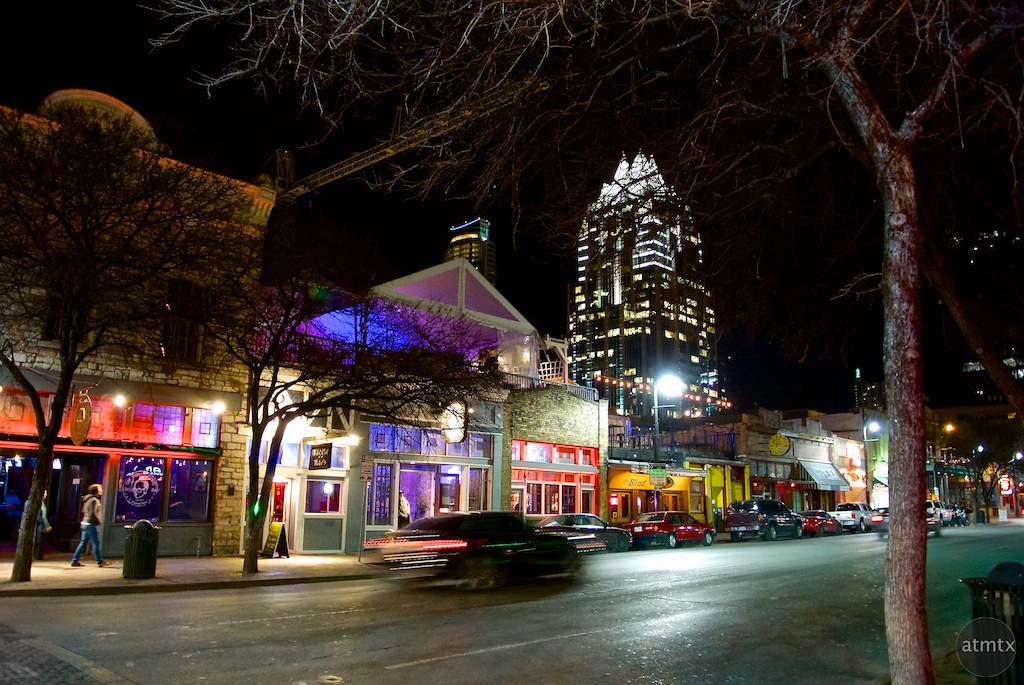 We are back to the (in)famous 6th street. Wednesday nights are still quiet. 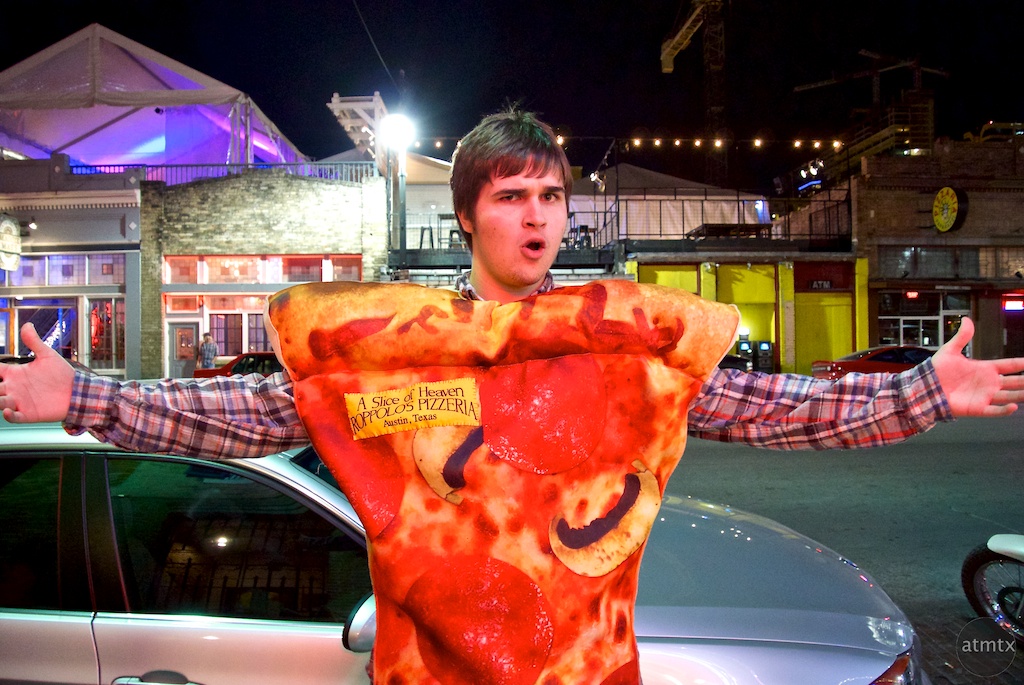 The “Pizza Guy” in front of Roppolo’s was entertaining. It’s the first time I ever saw this costume. 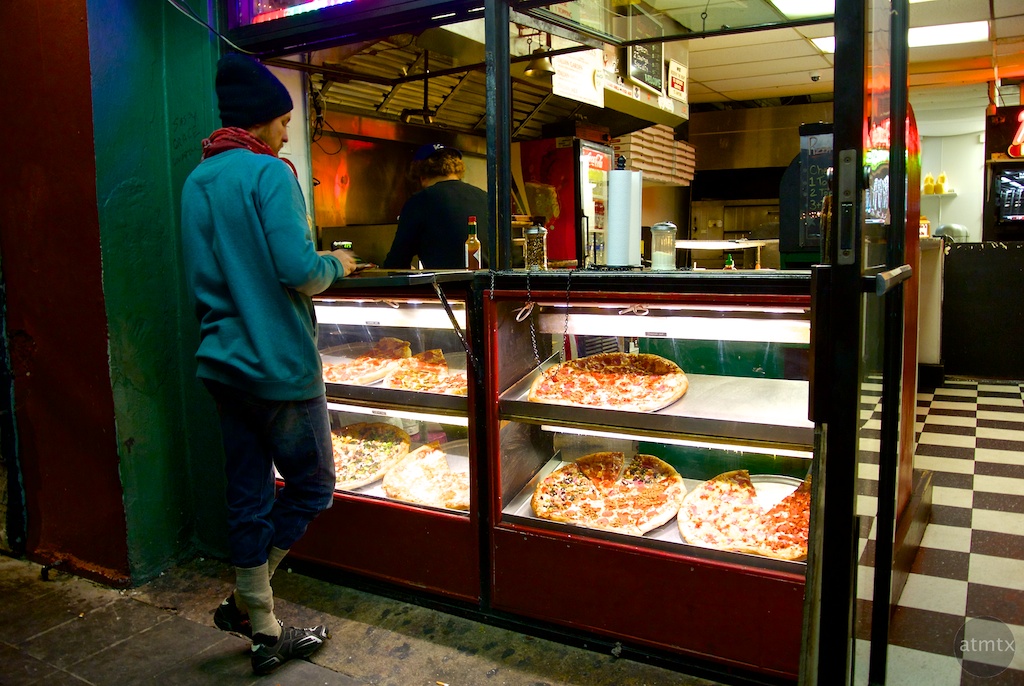 Was this guy buying because of the “Pizza Guy”? 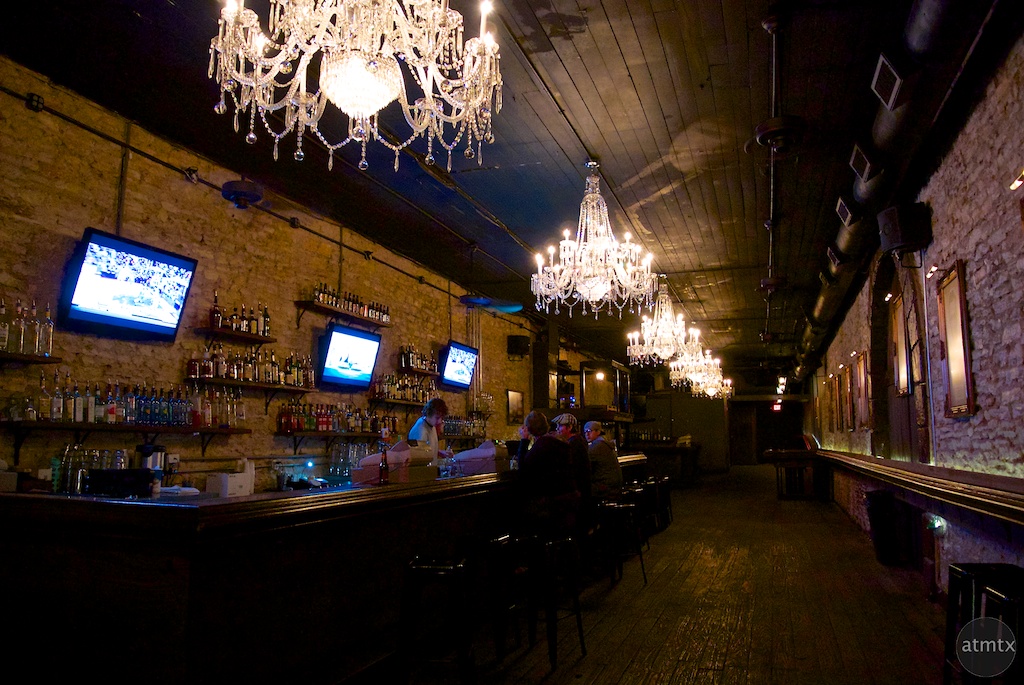 As I mentioned before, and as the Austinites know so well, there are a lot of bars on 6th Street. Most of them are right next to each other, all vying for attention. The one with the chandeliers looks almost elegant. You’ll see from the next set of images that they all look different. 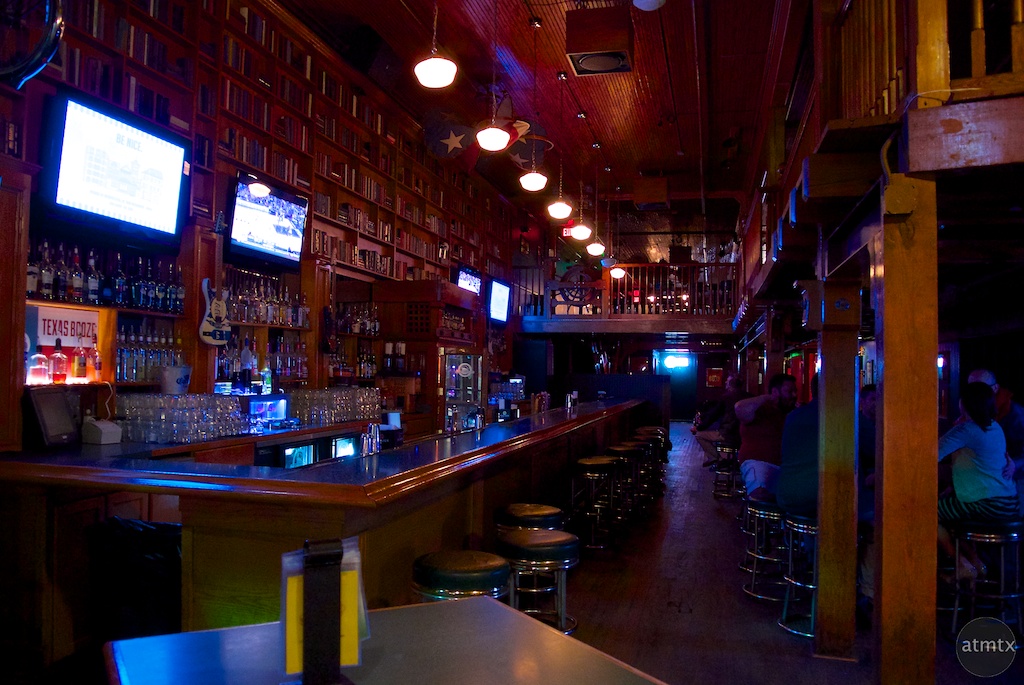 I think this one is called the Library Bar, for obvious reasons. I don’t think much studying goes on there, are least studying of books anyway.

The side door of Coyote Ugly. Wait long enough and you see women dancing on the bar.

Some bars have been around for a while but many fold and reopen on a regular basis. This is one of the newer ones, I think. 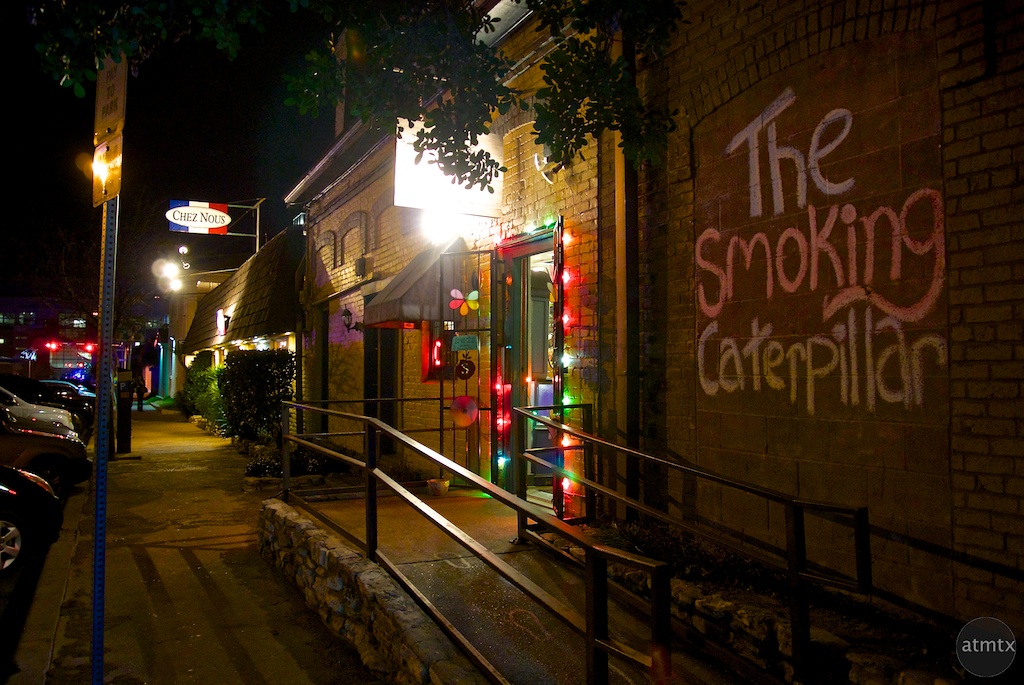 Finally I headed down a side street back towards the car. I don’t even know what this place is. 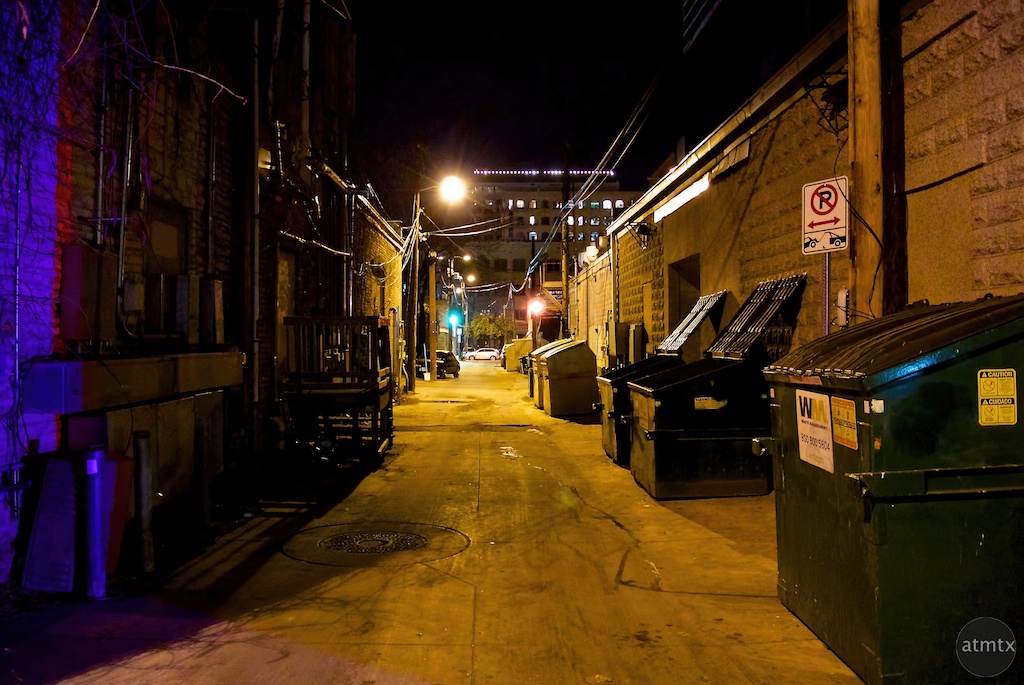 Here’s the a last one, at ISO 3200. It was a bit grainy but it cleaned up nicely with some noise reduction software. As you can tell, the little Nikon J1 is surprisingly versatile with the right techniques. Of course the slow shutter speed won’t work for portraits or for stopping action — in these dark places, you need a faster lens. And that’s the weakness of the Nikon 1 system. They don’t have a good selection of lenses, yet. I like wide-angle primes and they only have a 27mm equivalent but in a relatively slow f2.8. Nikon also has a 50mm equivalent f1.8 but that’s not my favorite focal length.

Unlike the Olympus where the image stabilization is built into the body, the Nikon 1 more conventionally uses in lens IS. Unfortunately none of the prime lens have IS. For low light photography, I can potentially shoot better with the kit lens with IS rather than the f1.8 lens, at least for non-action shots. The one downside of the slow kit lens is that it doesn’t work well for video in low light, since the shutter defaults to 1/60 of second. My videos look too dim without a faster lens.

My dream lens for the Nikon 1 would be a 35mm equivalent f2, preferably with IS. I doubt they’ll make it.

9 thoughts on “Urban night photography with the Nikon J1”