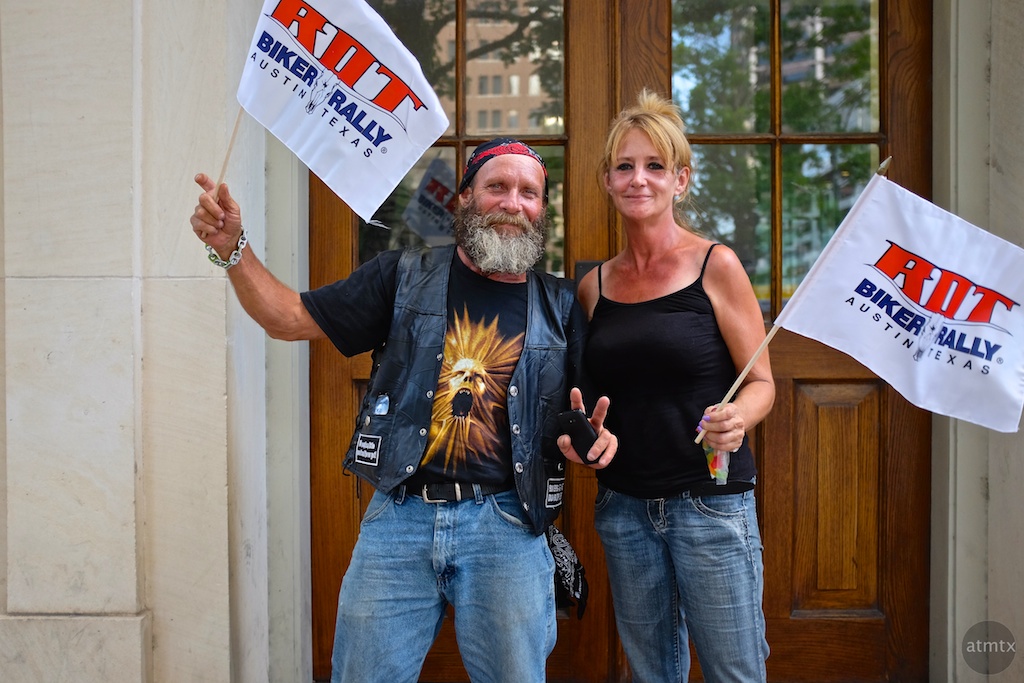 I’ve been going to the ROT (Republic of Texas) Biker Rally for several years now. Each year I bring a different set of cameras as my equipment and tastes evolve. This year the Fujifilm X100S was my main camera, no surprise there. I’ve been shooting the X100S quite a bit recently and blogging about it with regularity. After using it extensively in the Netherlands and logging close to 14,00 photos, I feel like I’m getting the hang of the camera.

You may recall that when I started shooting with it back in March, I was still getting my bearings, preferring the familiarity and comfort of the Olympus micro 4/3 cameras. 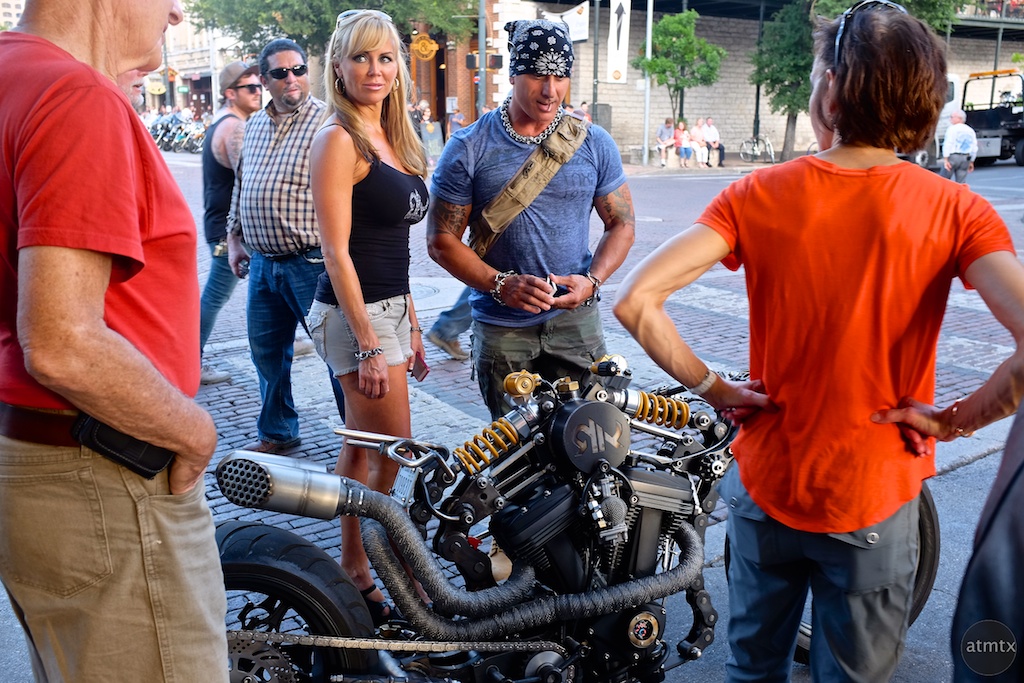 Like in past years, I got down there early before the main parade — 6th street is where many of the bikers congregate. Often, it’s the place where people proudly showoff their bikes. This person probably had the most unique motorcycle there and it garnered a lot of attention.

With increased familiarity with the Fuji X100S, I’m experimenting. This one with some extra flare. JJ Abrams would be proud.

I headed over to Congress Avenue for the pre parade activities. These bikini clad women handed out ROT Rally flags. You can see the flags proudly on display by the couple at the top of the post.

These three are part of the Texas Roller Derby. They did street acrobatics as well as handed out discount coupons. 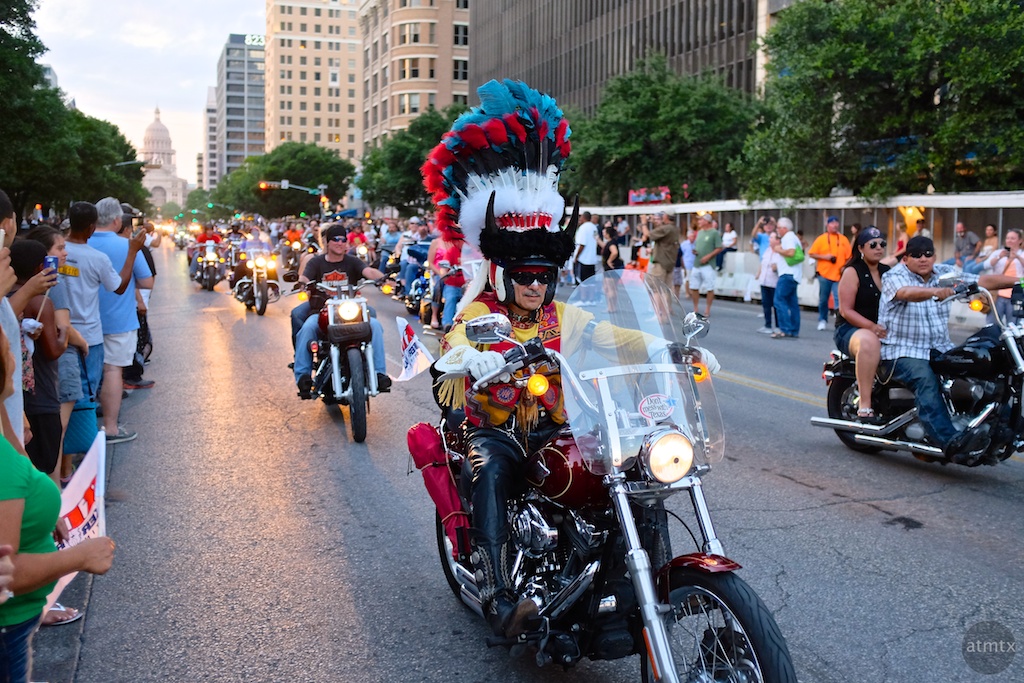 After many years of the same format, they changed the ROT Rally Parade this year. This created a kink in my photography plans since I was expecting, out of habit, the same parade route. In past years, the motorcycles would do a slow pass up and down the street and then park. This year, they greatly extended the parade and did a single, higher speed pass down Congress Avenue. That made it heck of a lot harder to capture the motorcycles. I was forced to improvise by manually pre focusing, and upping the shutter speed to 1/500s and 1/1000s. It took a bit of futzing but it turned out decently. As a big plus, the new route allowed me to get the Texas State Capitol building as the backdrop.

With such a fast shutter speed and with the evening light, the last two photos jumped to ISO 6400. The Fuji did a good job with the detail. I generally keep 6400 as my upper limit for the camera. I also think my familiarity with the X100S helped me to successfully improvise. I’m actually amazed how many scenes I captured with a single 35mm equivalent lens.

New for this year, Austin setup a second ROT gathering site south of the river at the Austin American-Statesman newspaper building. The parking lot was transformed into a vendor, food and concert space. I walked down there with my photographer friend Dave, who I met during the parade. If you know Austin, you know they always setup live music stages for these kinds of events. After all, the city brags that it’s the “Live Music Capital of the World”. Friday night was no exception.

It took the opportunity to do some street shooting in and around the food booths. I always like the glow of lights at night and the X100S does a good job with them.

I also started experimenting with the flash blending. Fuji has something called Super Intelligent Flash on many of its cameras where it does a really good job of blending the right amount of fill flash with the ambient light. It’s actually one of the reasons I bought the X100S but something which I haven’t tested much until now.

The portrait of the Mexican Motorcycle Acrobats came out great at ISO 2500 and at 1/30s. The next two were at ISO 5000. The first one is fair but a bit soft — it also has a slight depth of field issue shot at f2. The second one came out better. Overall though, given how dark it was, it did a fantastic job of lighting the subject and maintaining detail in the background. 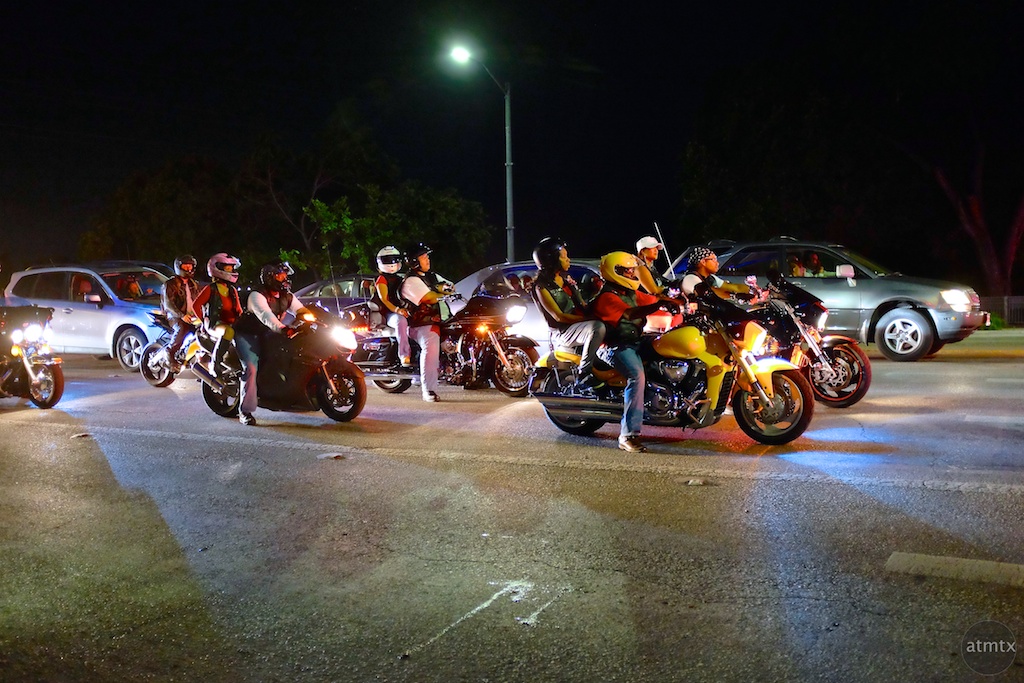 I headed back north to 6th street, that’s were I figured most of the action will be. The ROT participants where thinking the same too. Groups of them rumbled up Congress Avenue towards the bars and night life.

6th Street is always, shall we say, festive on the weekends. But during ROT Rally it gets amped up. This year though, because the venues were split into multiple locations, 6th was not as packed. It think it lost some of it’s craziness which might have been part of the city’s plans. I have to admit that I like the previous years better.

That’s not to say that the 6th Street bars don’t have of plenty of attractions to entice customers. I find this place to be one of the most intense for sheer capitalism. The bars complete vigorously to pull in customers.

In years past, I came down with my HDR setup, complete with tripod, to photograph the glowing bikes. HDR works particularly well in these cases. I’ve done enough of these shots that I decided to forgo the HDR, it also saved me from carrying a tripod. I did, however, try get an extra pop by using the Fuji Intelligent flash. It works great for objects too, not just people. While perhaps not as striking as the HDR, I think it came out pretty darn good for a single exposure in JPEG. More than anything, it’s the shallow depth of field that gives this shot a different look. After all, I was hand holding it in the dark at ISO 5000 at f2. Not bad.

Here is another example of flash blending. I wanted to light the dark bikes in foreground and balance it with the background neon.

All told I was there about 4 hours last Friday night and walked about 7 1/2 miles according to my Pedometer++ iPhone app. That’s good because these photo walks are one of my main sources of exercise, sad but true. Stay tuned, I have a lot more ROT Rally coverage this year. I did some extra special camera testing the next day, comparing the performance of 3 cameras. Look for that soon.