You knew it was coming, didn’t you? The urban night-time scenes? Until now, almost all of my postings from the Netherlands were from the daytime, which is unusual for me. As you know, I like the night-time in the city.

Being a tourist in a foreign country, it’s inevitable that I shoot more during the day than usual. Compared to the regular tourist, however, when they wind down after dinner, I’m just getting started on my second half of my photography. Breda was easy because the town is small and the hotel was nearby.

I shot these throughout the week. During the weekdays, I still went out at night to shoot after work, even if I was tired. It wasn’t a big deal though. Photography is relaxing for me, even when I’m in a directed, “gotta get the shot” mode. I would go out and eat and strolled through the center of town, getting both my creative fix as well as getting much-needed exercise. 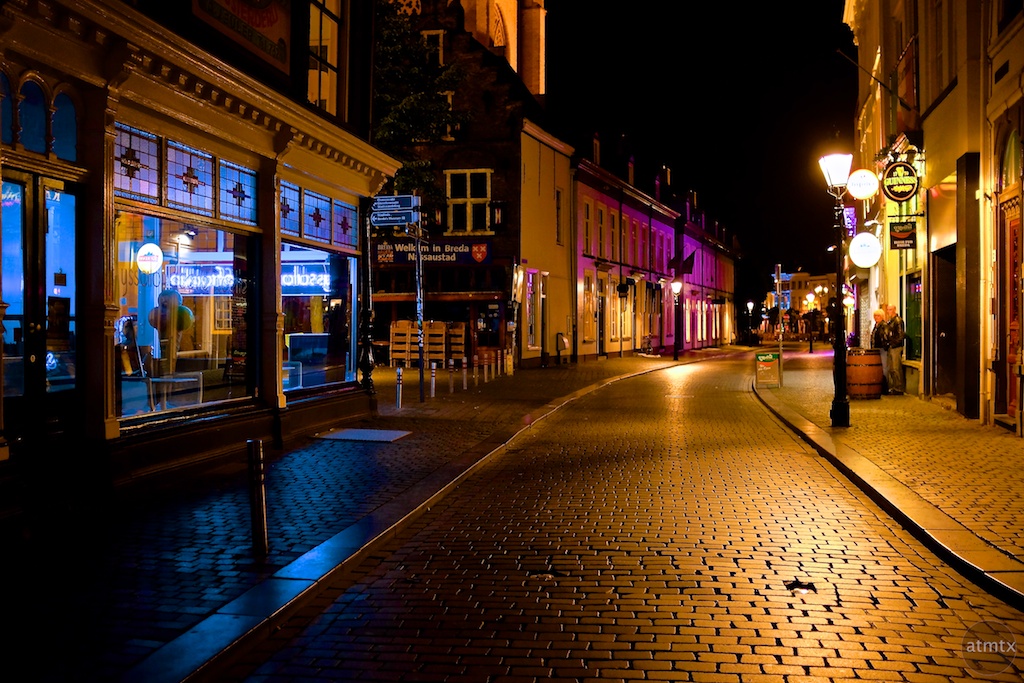 I walked like crazy and my Pedometer App registered 10,000 to a high of 20,000 steps in a day, which is anywhere from 4 1/2 to 9 miles. I’m glad I had a light camera with me — no bulky and heavy DSLR to slow me down. While my feet might have ached a bit, my shoulder and back held up well. 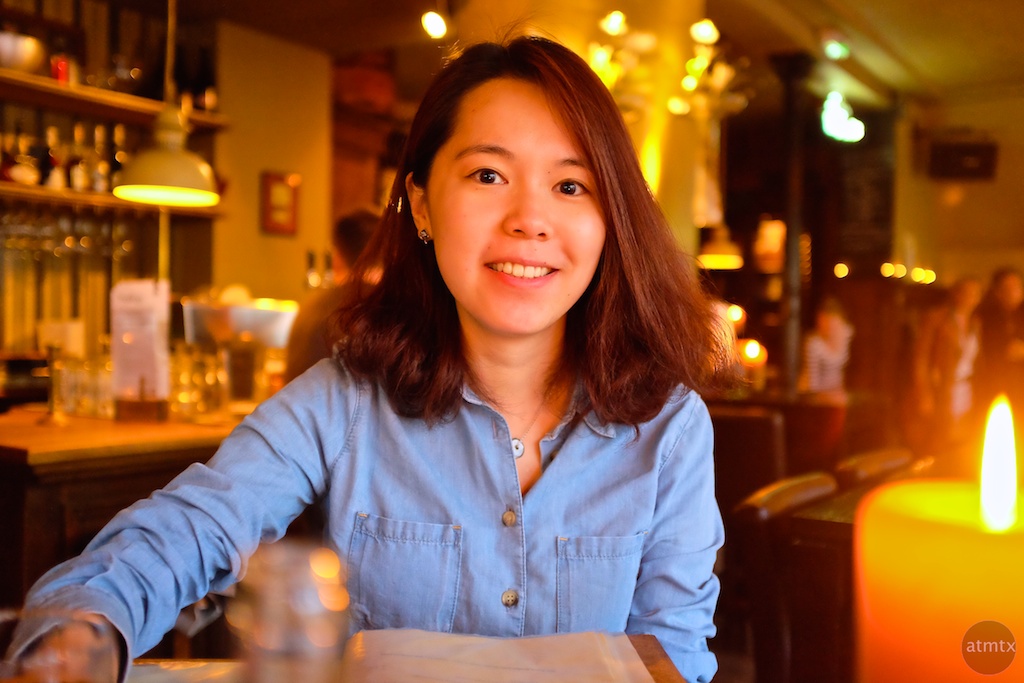 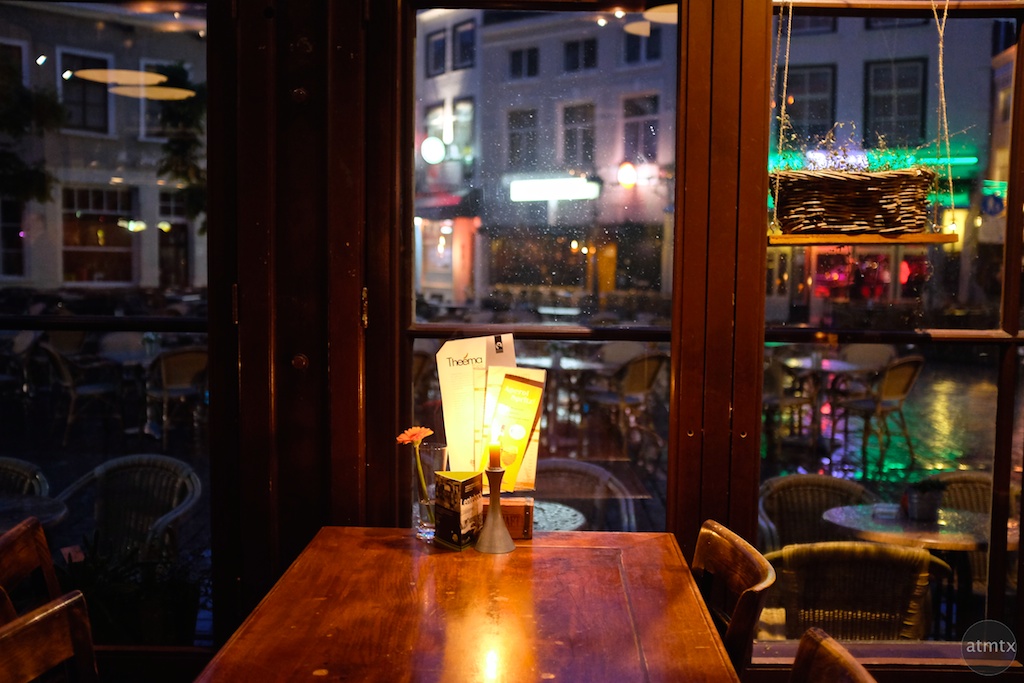 I also had the pleasure of exploring the city with Corrine who was on a business trip from Shanghai. I met her at the hotel as we both checked in at the same time. We did some touristy exploration of Breda, which doesn’t take long. We also had a few pleasant dinners together.

She was patient as I snapped my photos throughout our city exploration. Luckily by then, I was pretty fast at shooting the Fuji X100S. The camera worked well for taking her portrait in the very dark Cafe Corenmaet as well as shots of its moody interior.

Leave the pedestrian only center of town and you have cars and buses that loop the central core. Traffic was still light and I probably saw more bicycles than cars. This impressive building is the Breda Casino, which appears to be stylishly modernized. Notice that artistic windows inset into the brickwork. No gambling for me. I was too busy taking photos. 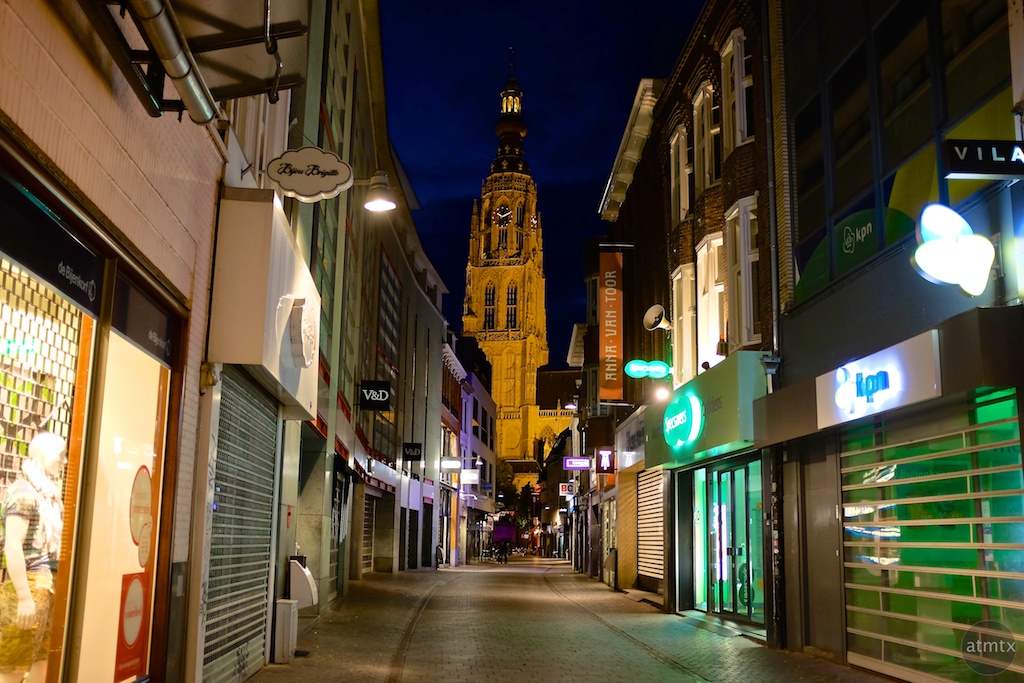 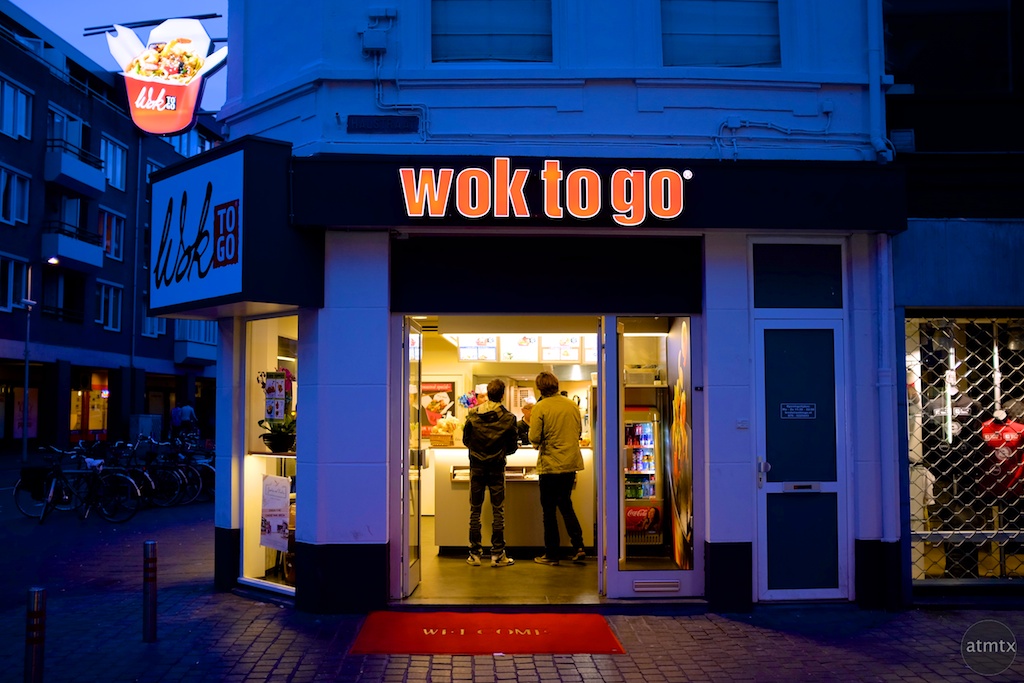 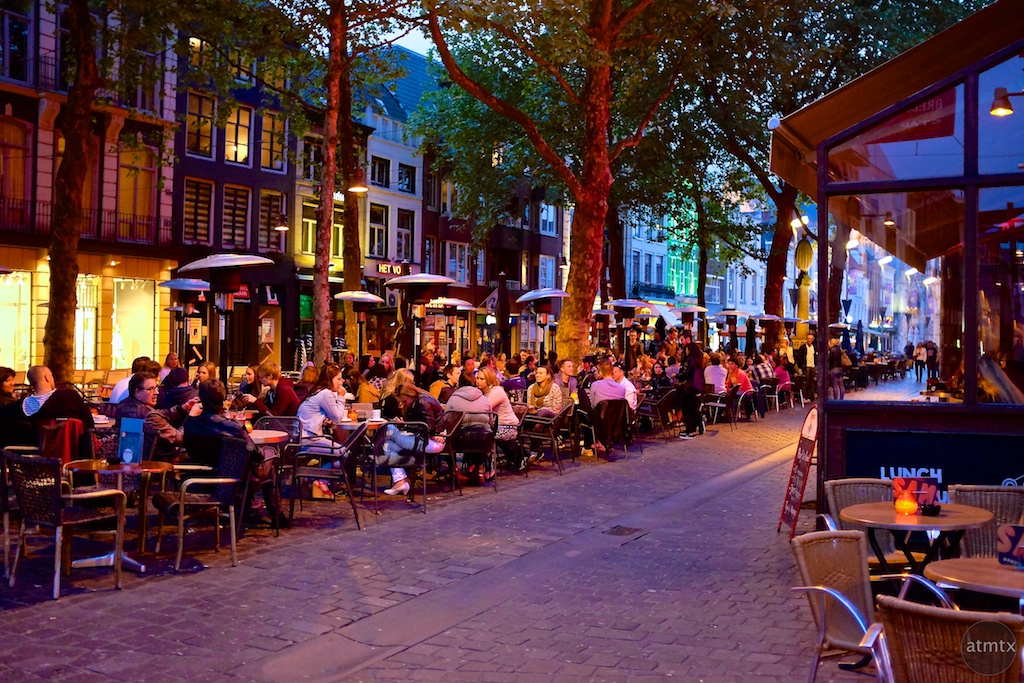 All of the shops closed early except on Thursdays. But the bars and restaurants are open late. The outdoor seating bustled with people into the night. My previous Breda post showed a quiet place with no people, but that was early in the morning. I like a place that doesn’t shutdown at night. I was actually surprised with the amount of activity, given that Breda is such a small city. Perhaps the Dutch are night owls like me. 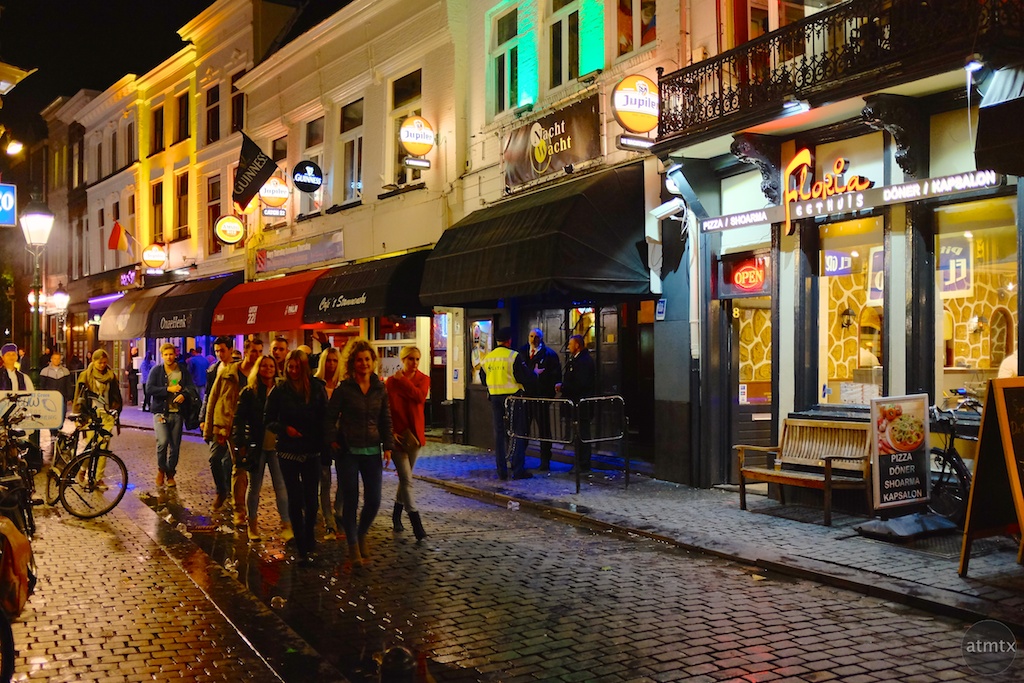 The bars and clubs clustered around the big Grote Church in the center of the city. These places had bright color but were more subdued than 6th Street in Austin. Most of the places were really small but people were packed into the bars and I saw some lively dancing. 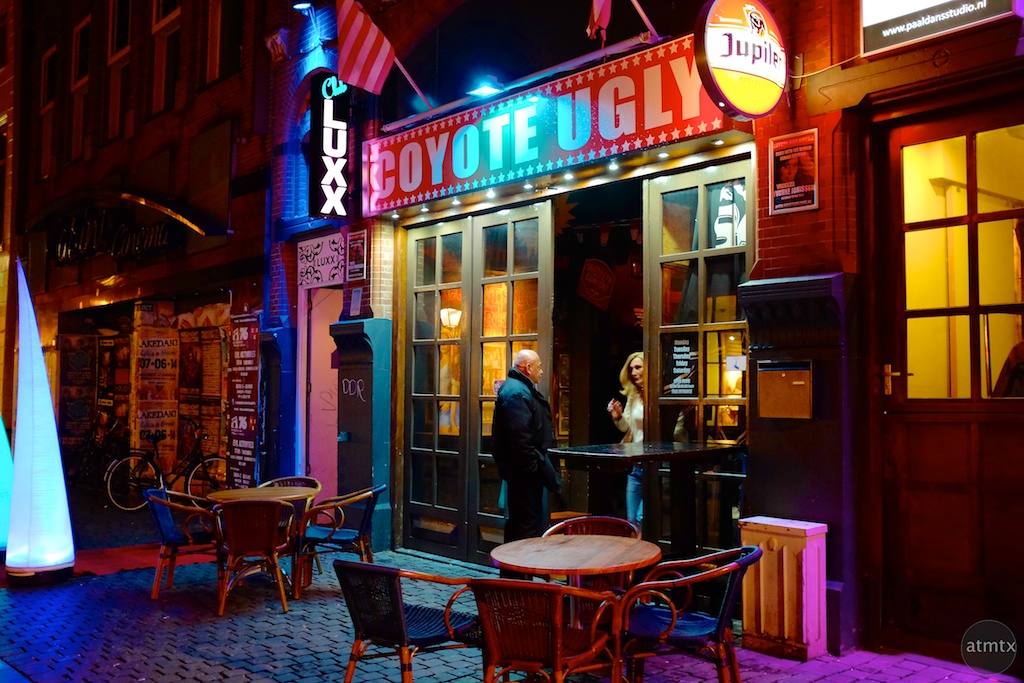 I was more of an observer and had just a couple of beers. I was definitely more interested in documenting the city instead of partying the night away. That’s the problem being somewhere for only a short time. I feel compelled to use my limited time for photography.

In Austin for example, I would more often pop into the bars and relax with a drink. I don’t have the time pressure there since I’ve been to 6th Street often and I really didn’t have to shoot any more photos. 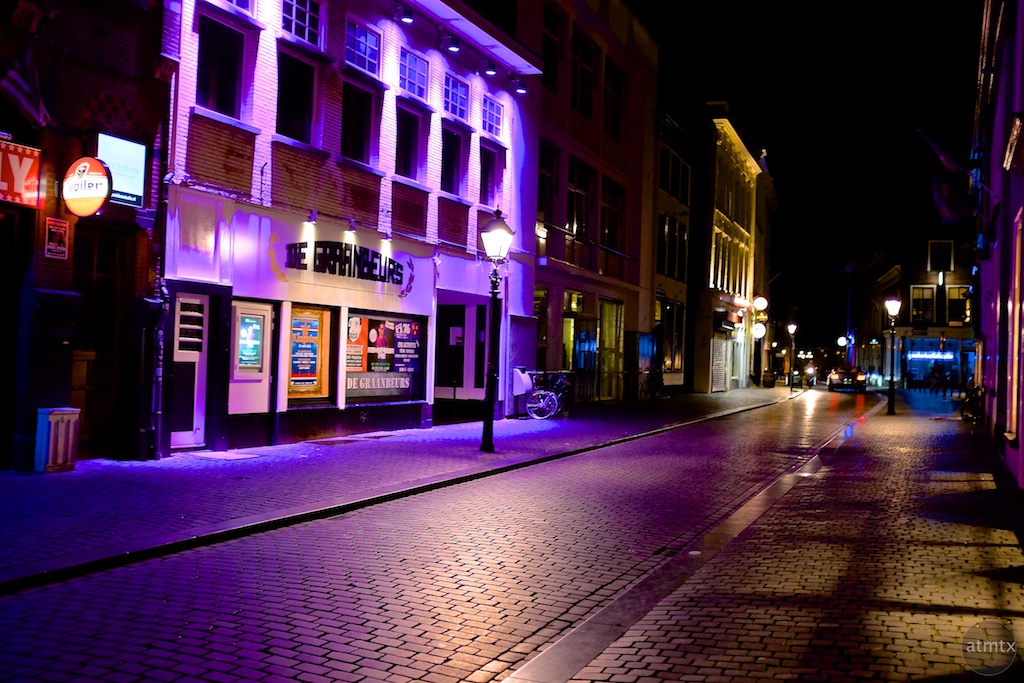 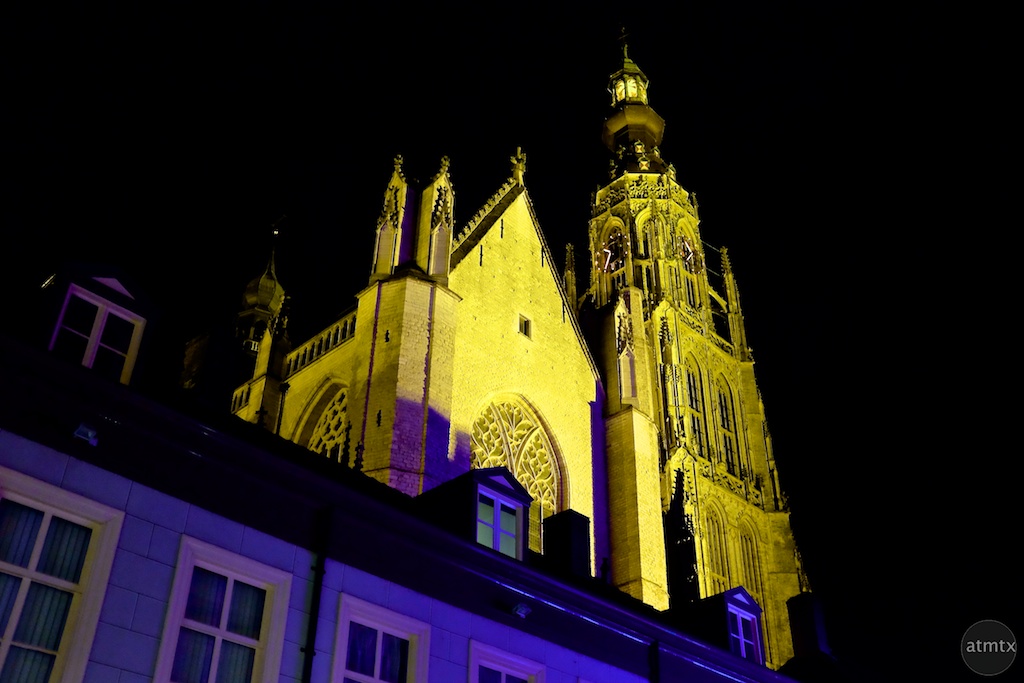 While I think I got the feel of the place, I certainly could have stayed longer. That’s the great thing about photography on business trips. Instead of being all alone in some business hotel cooped up in the room, I get to explore new places. It certainly keeps me entertained during the non-work hours. It also helps when it’s a charming place like Breda filled with endless details to photograph. 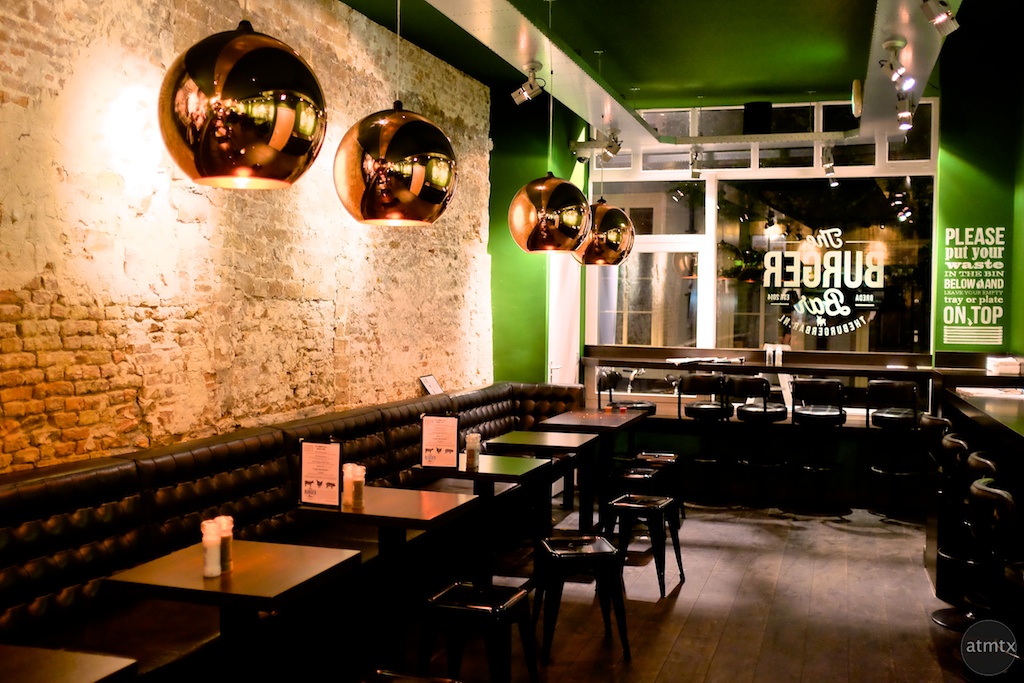 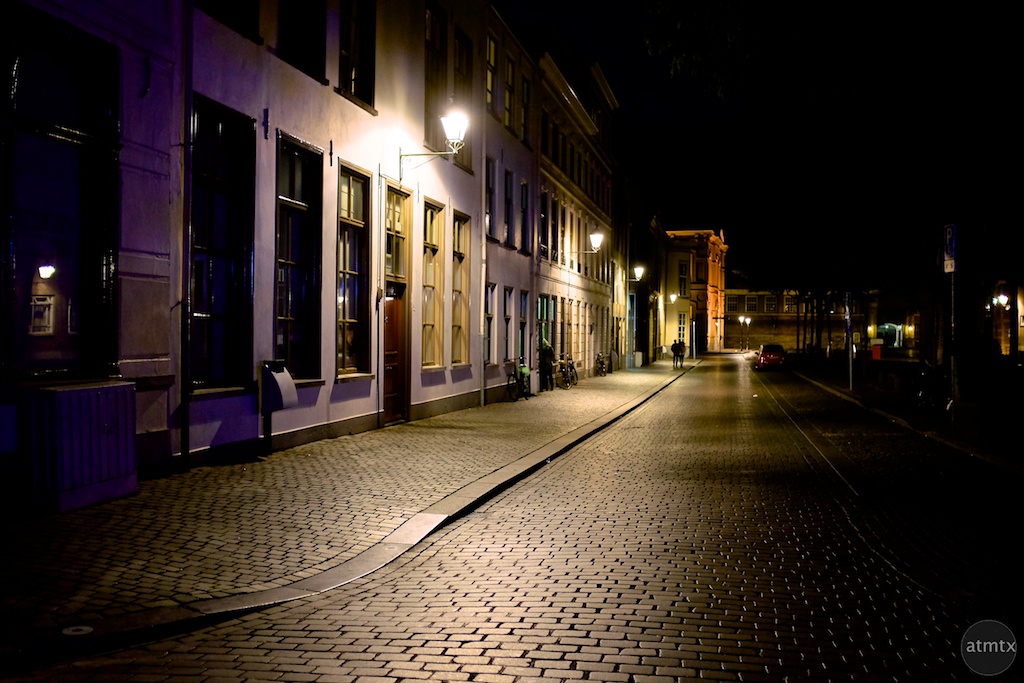 14 thoughts on “Breda, Netherlands at night”