Walking into the nondescript building near Shin-Yokohama station, you have no idea about the special world that lies deep within. At street level, you see ordinary exhibits that talk about Ramen, the Chinese noodle that’s made a big impact in Japan and who’s popularity has now spread to the U.S. It’s a museum dedicated to Ramen, how interesting can it be? Down a set of unassuming stairs, however, get ready to be transported through time.

This was my second visit. I loved it so much that I needed to go again, a couple of years later, this time armed with a tripod and wide-angle lens. Yup, I wanted to create detailed HDRs.

Truth be told, I’m not even a devoted Ramen fan, though not surprisingly, this will be an excellent place for Ramen aficionados. Sure I like the noodles well enough but I can equally be happy with a bowl of Vietnamese Pho. Instead, what I really like are rich urban environments. How strange that this place, more than many places in Japan, gave me a visual feast.

Walk down those ordinary stairs from street level and time begins to warp. You hear faint music and the rumble of trains. You notice that the walls become dingy and the posters, old. You realize that you’ve walked out of a train station and right into 1958 Japan. Shops line the streets — an Ice Cream Parlor, a camera store, bath houses and restaurants. All vaguely familiar but old. An alternate universe from nearly 60 years ago.

It feels like being in an episode of Star Trek where a hidden portal or holodeck has morphed the world around you. The glittering 21st century suddenly and unexpected yanked and replaced with an early modern society. You recognize the gadgets and the lifestyle but it’s distinctly pre-digital. Yes, you’re in an elaborate “amusement park” but one that Disney’s Imagineers would be proud. The detailing is fantastic and for an urban photographer, paradise. 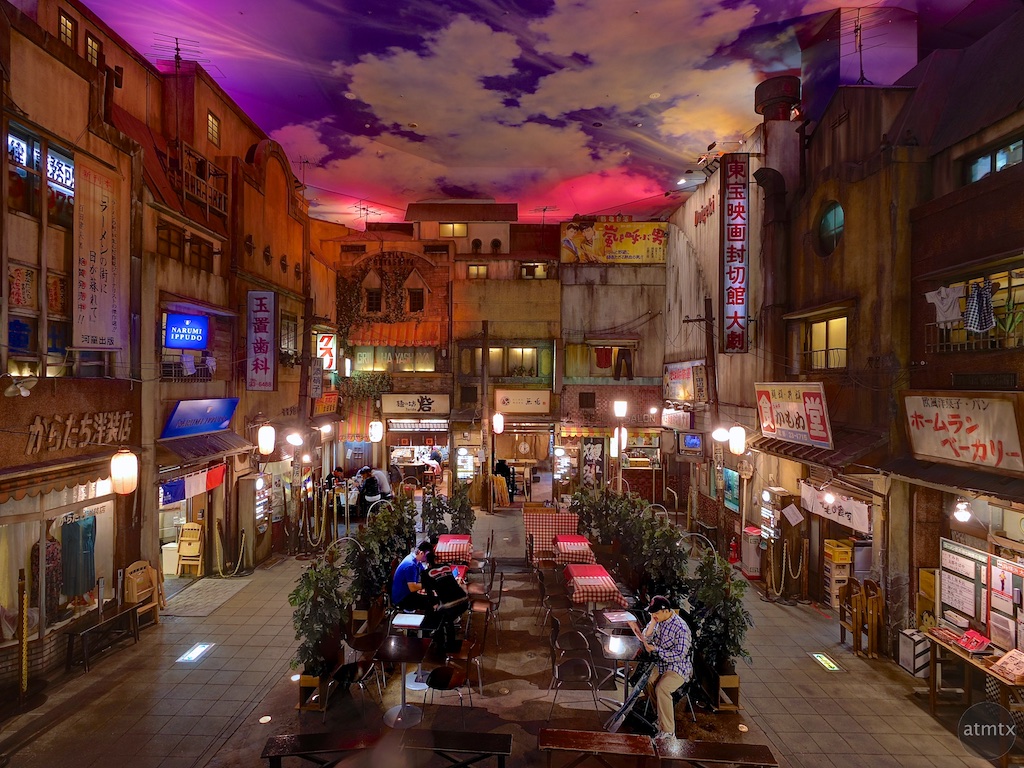 Hidden within the faux-store fronts are real Ramen restaurants. Many from all over the country. The world is unexpectedly large, on two levels. Stairs lead from the “time portal”, down to a courtyard which resembles the typical shopping districts that surround train stations. It’s easy to forget that you’re actually in a basement, several levels deep under modern Japan.

It was only hours after I got my new wide-angle lens for the Pentax Q7, used in conjunction with an ultra light but slightly rickety tripod. Luckily, it was adequate for creating HDRs, in my realistic style. I wasn’t sure if tripods were allowed so I purposely used the most unassuming setup possible — nobody said anything.

A few years ago, on my first visit, I shot standard photos with my Olympus. While satisfying for most, I came here again to use my full HDR treatment. This place deserved it. Admittedly, my appreciation for cities and the man-made may be unconventional but for anyone with a similar interest, it’s a must. 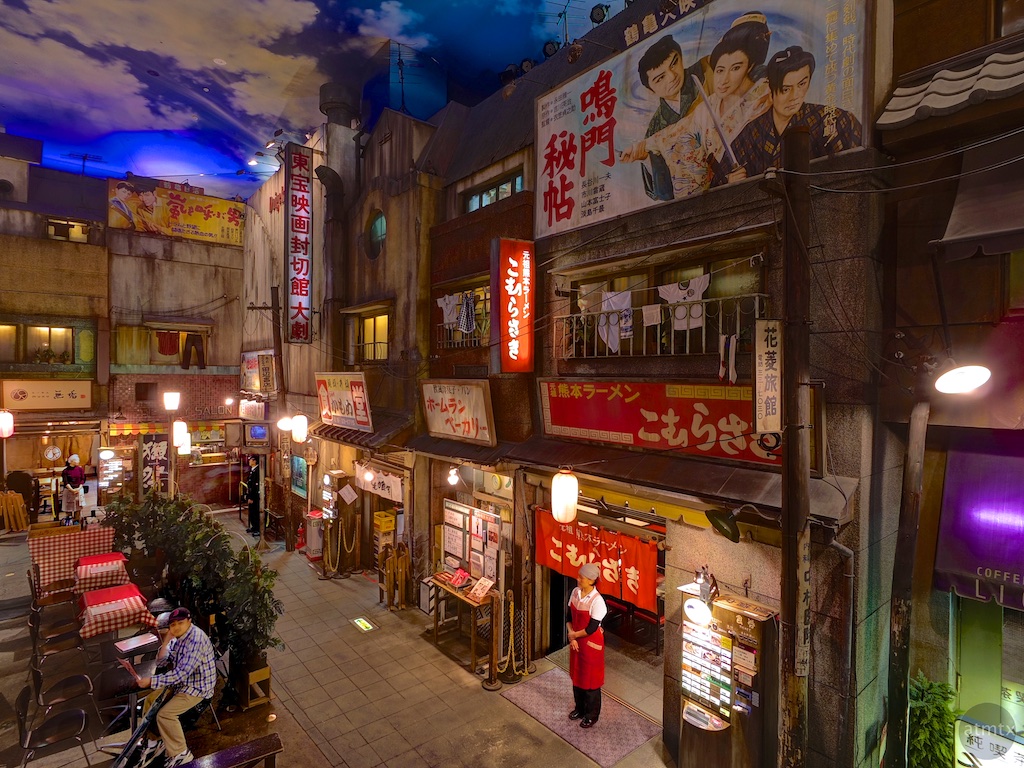 I wonder what the Japanese think of this museum and of the late 50s in general. Was it a happy and heady time? It was a mere 6 years before the Tokyo Olympics, when Japan rapidly grew into a superpower. Ironically, when I shot these photos in 2014, it was also 6 years before the next Tokyo Olympics. Modern, bustling Japan, while vibrant, has clearly peaked. Its economy, stuck in an on and off recession for 25 years.

Perhaps more than just a museum, maybe it’s a feel good illusion where the Japanese can be optimistic. A far away time when the economy and the country’s prospects looked limitless. For me, it’s a set where I can experience the romance of made up history wrapped in a controlled and convenient urban veneer. Not a bad way to spend a cold and rainy afternoon.

10 thoughts on “Shin-Yokohama Raumen Museum: One of my favorite places in Japan”