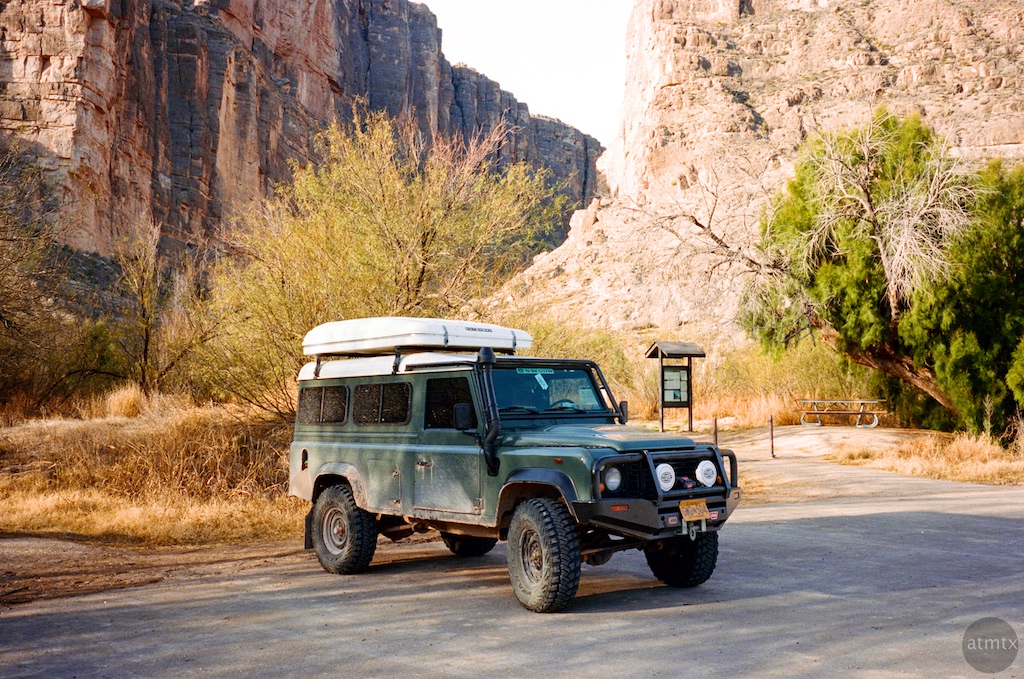 You might remember that I used a slew of cameras on the Big Bend trip a week and half ago. A mind-boggling, to some, 6 cameras in total. I had my “high profile” cameras such as the full frame digital Canon 6D, or the medium format film, Mamiya 645E, as well as my ultra fun compact digital, the Pentax Q7. But the camera that really delivered some beautiful photos was my 20-year-old 35mm compact, the Nikon 35Ti.

The Nikon 35Ti was a rich man’s travel camera introduced back in 1993. This titanium clad beauty was sold for a hefty $1,000 back then. I picked it up last year for under 300 bucks. My first roll, the tried and true Kodak Portra 400, a very easy film to shoot.

I mentioned earlier that my first experiment with Velvia 100 didn’t turn out as well as I hoped. I under exposed the film too much and I wasn’t crazy about the colors either. No such issues with Portra 400. Nearly every shot from the first roll came out great. Portra is easy to expose since it has so much latitude and I’m also familiar with the way the 35Ti meters.

About the only gripe with this camera, at least for landscapes, is the fixed 35mm focal length. I would have loved to shoot something wider, at least 28mm or more. That said, I think I managed some nice travel shots. What I love the most is the warm and mellow colors. That’s the main reason I’m experimenting with film. 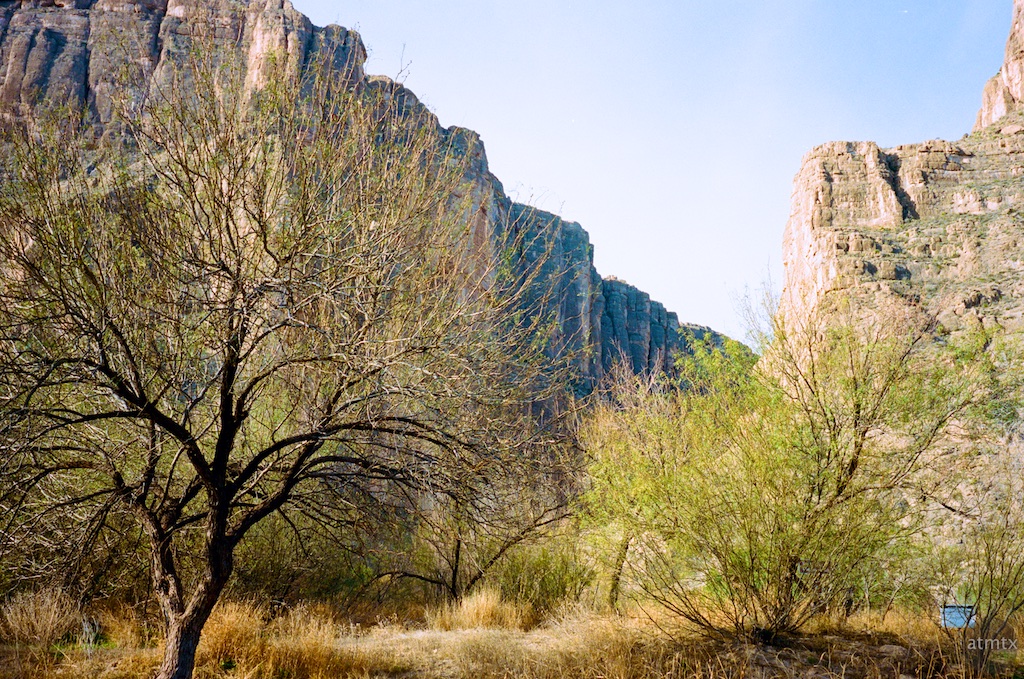 On the first morning, we went to Santa Elena Canyon. There was a wonderful old Land Rover parked in the lot. The group rushed out to the canyon but I stayed behind and shot the wooden path with several of my cameras. As you know, I like the man-made and like how the path created a winding leading line towards the massive canyon walls. 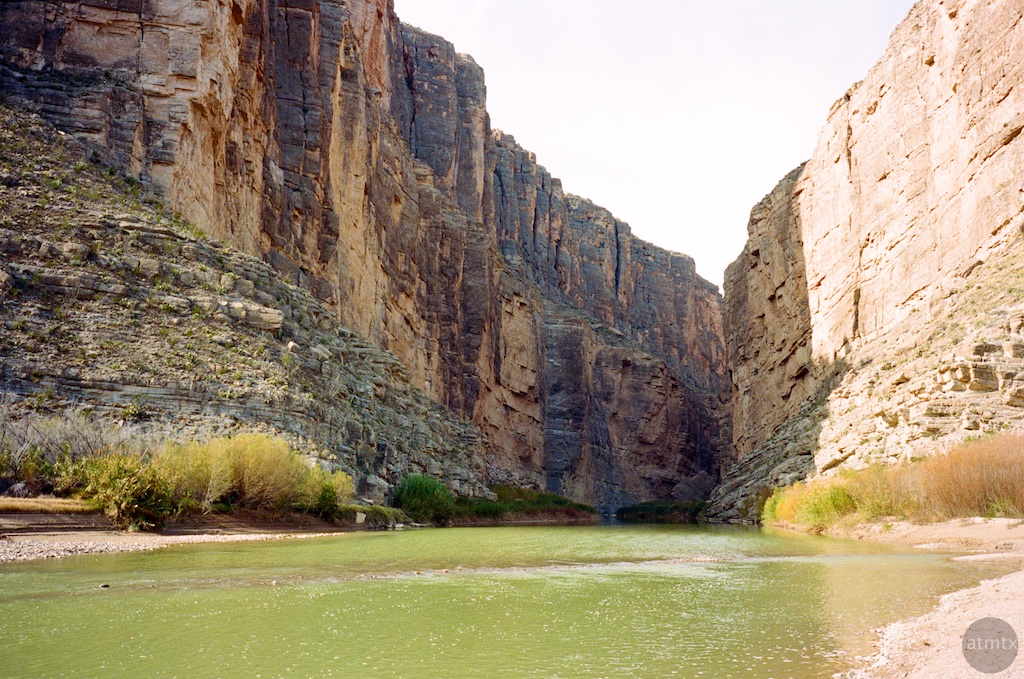 At the river itself, I couldn’t find a good composition. My sensibilities wanted me to be in the middle of the river with the walls rising on either side but I wasn’t prepared to risk my equipment for that vantage point. Obviously, I’m not a serious landscape photographer. By the way, this is the “mighty” Rio Grande which separates the U.S. and Mexico. So yes, the cliff on the left side is Mexico while the right side is in the “country of Texas”. 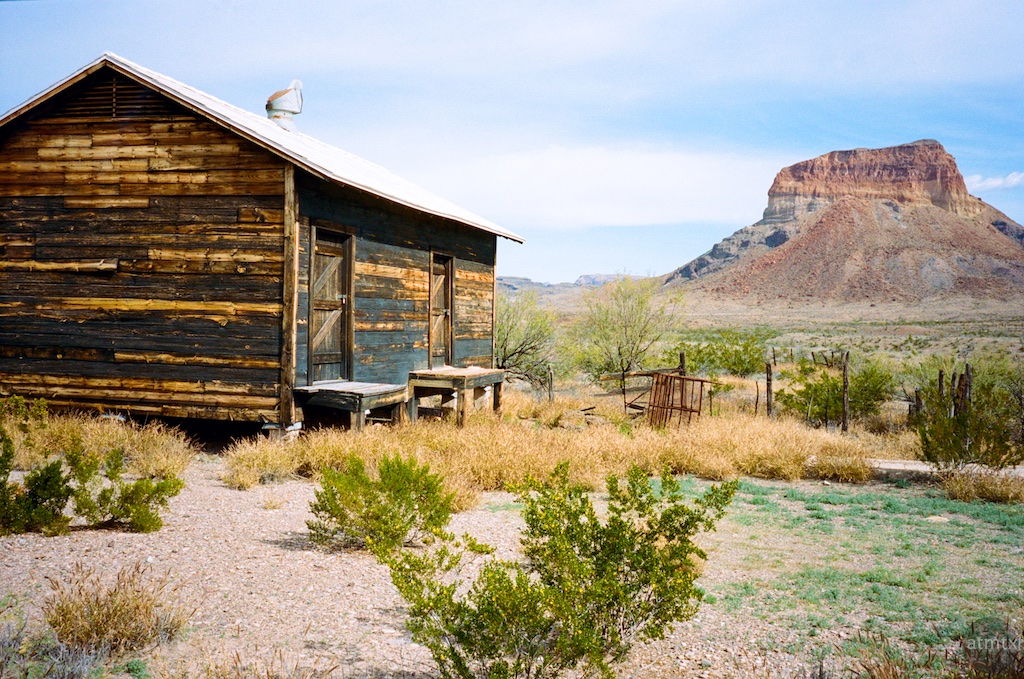 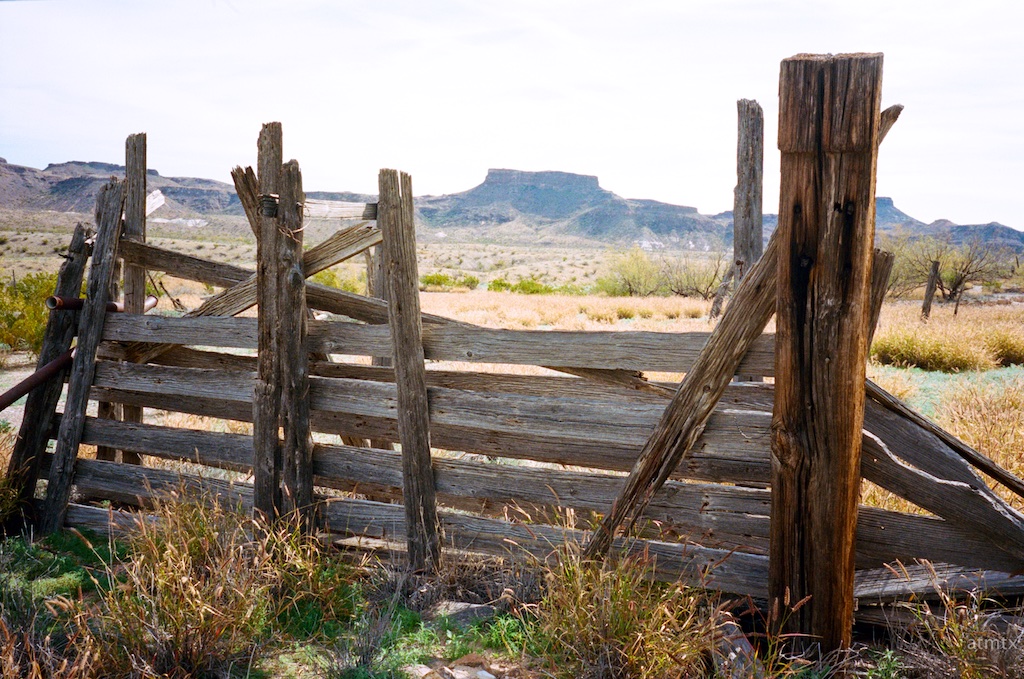 A couple of stops later we got the Castolon Ranger Station. I made my way back to the historic displays which got me into my element. As you know, I’m a urban landscape photographer which means I’m at home in the city and near man-made things. Nature is great as long as its taken in moderation, I say. 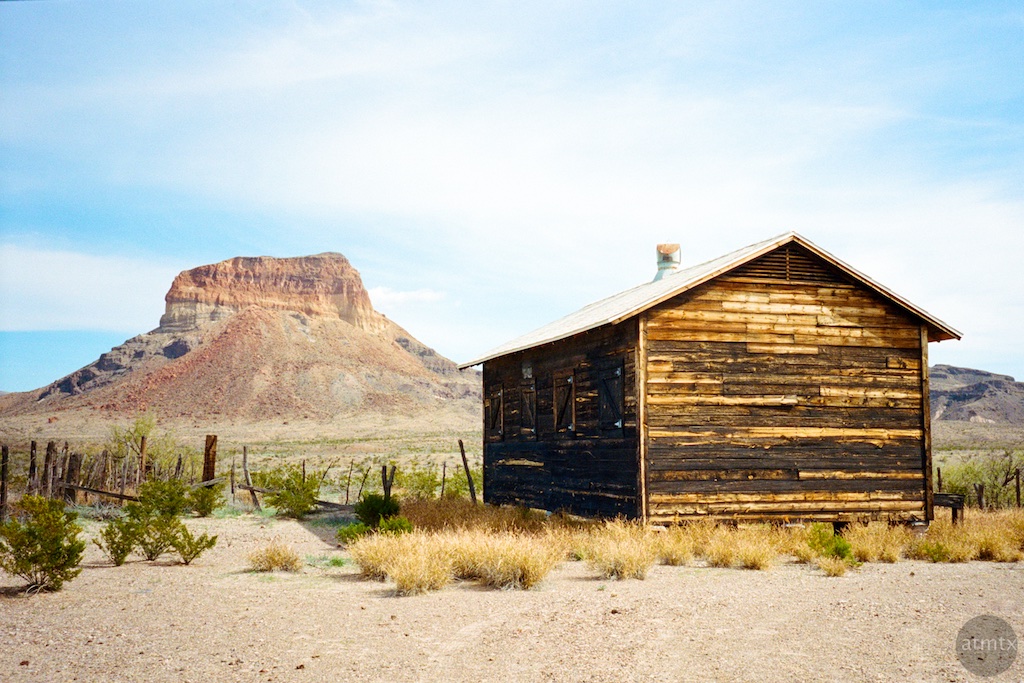 There is no question, I “see” a lot better with the hard angles and geometry of the man-made. I also enjoy the compositions more, I think. At least for now since I don’t usually shoot nature by itself. Unlike my typical city shots, I like how I get to juxtapose these structures with the wide open west.

These western landscapes have a painterly look to my city slicker eyes. I don’t know if it’s the light, the dust or some other mysterious X factor, but the images look different here. These were taken around noon but they don’t have the harsh look that usually dissuades me from shooting midday. 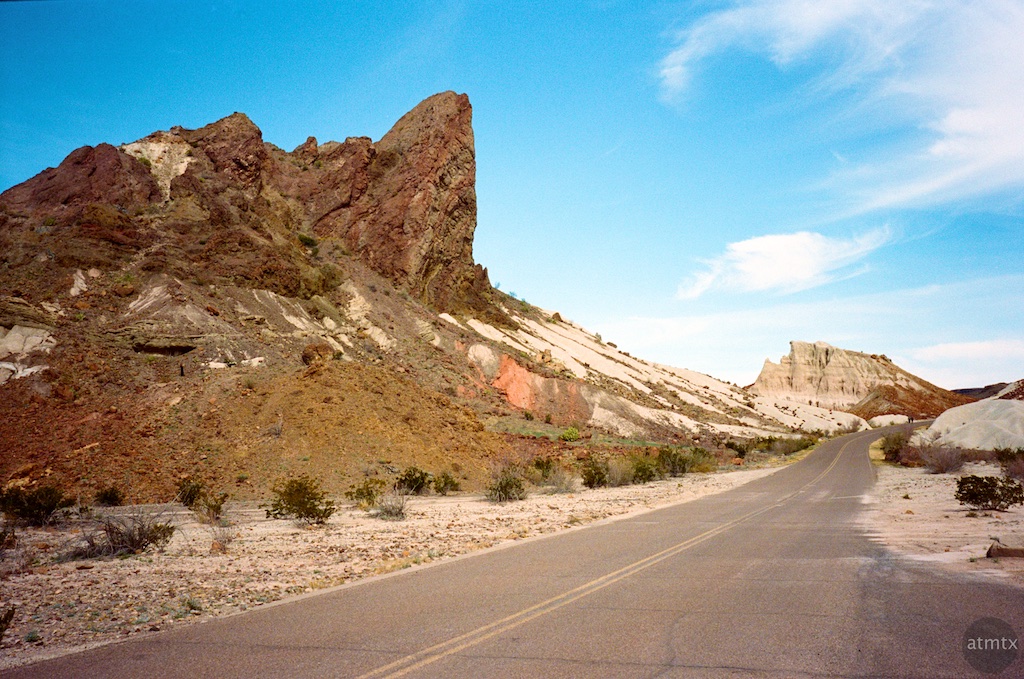 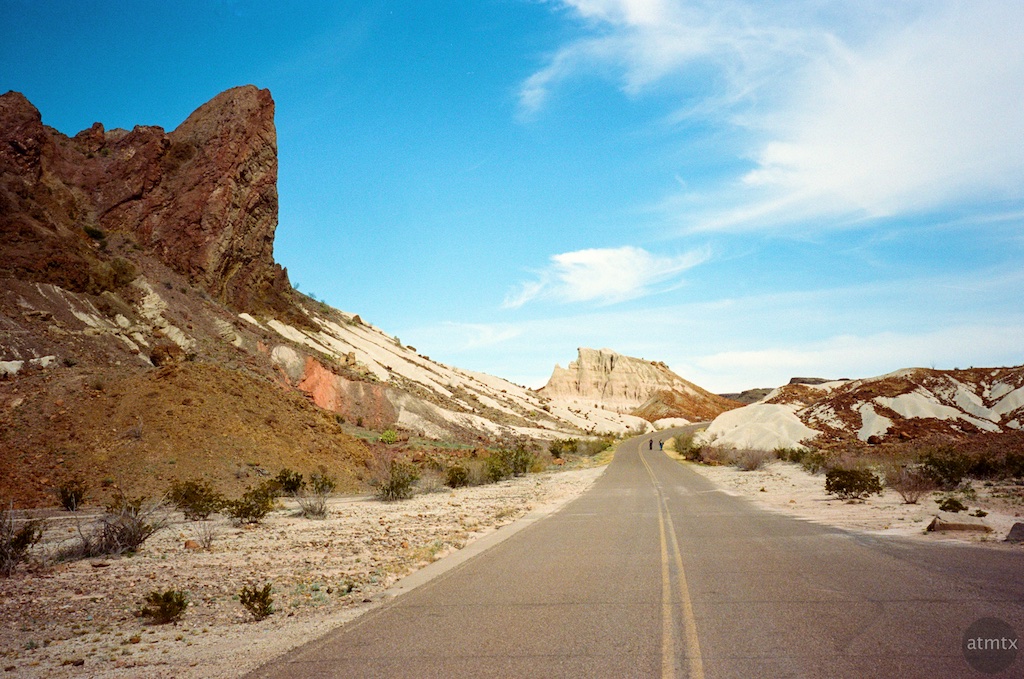 Next up we stopped at Tuff Canyon. I shot from near the car. The road and leading lines, attracting my attention. Again, the man-made mixed with nature, I guess.

I did shoot the flowers though, that’s nature, right? 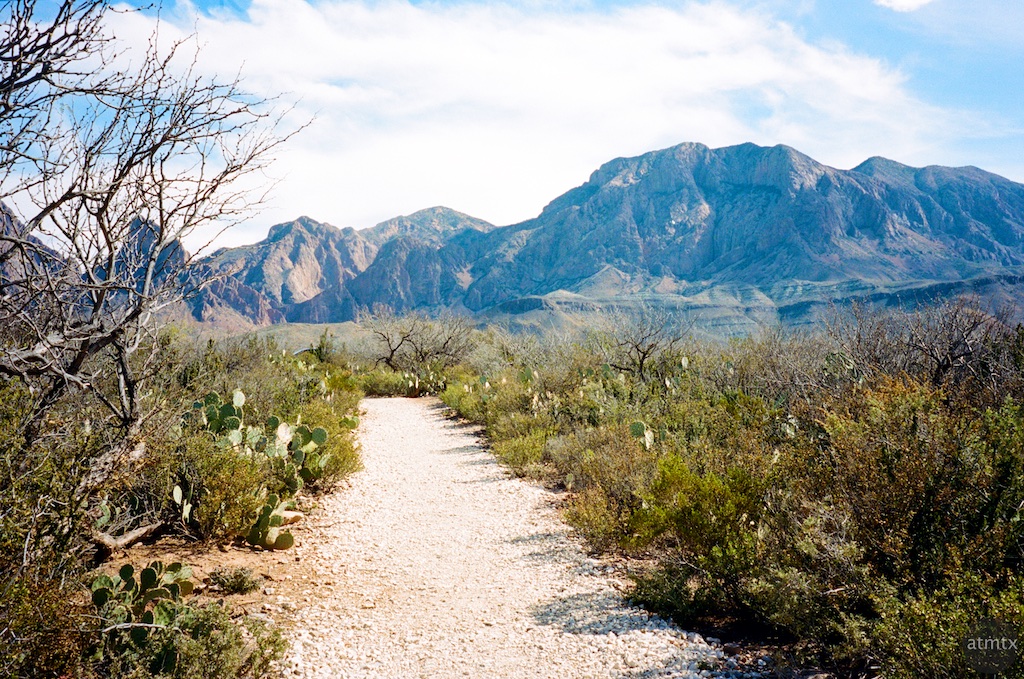 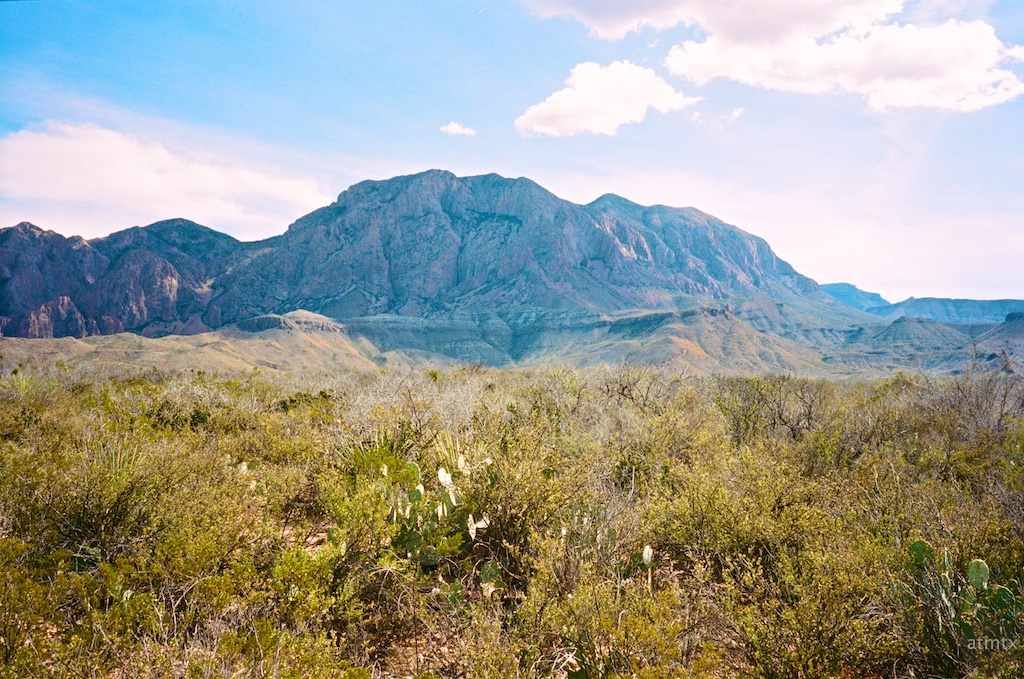 We quickly stopped by Sam Nail Ranch before having a late lunch at 2pm. We were just passing through. Those mountains in the distance, the Chisos, would appear golden if we came here at the right time near sunset. 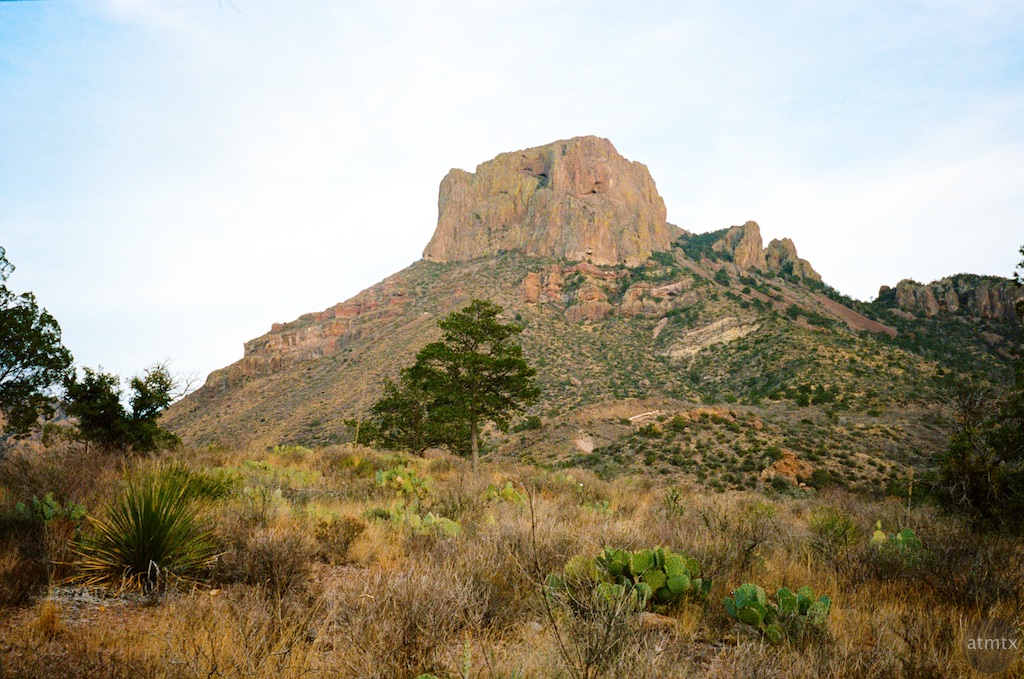 The last stop, after lunch and a rest was Chisos Basin. This is one of mountain formations behind the famous “Window”, which we shot for sunset. The weather and light didn’t cooperate so our sunset “window” shot wasn’t impressive but at least I got this snapshot of the big mountain.

Th photo is grainer than the others, which means the image was most likely underexposed and the scanner brightened it. Portra was able to recover this well and I’m left with a decently exposed image. Velvia would be less forgiving in this case.

This was the end of the first day. We stayed until it got dark, past blue hour, and then headed back to our cabin. 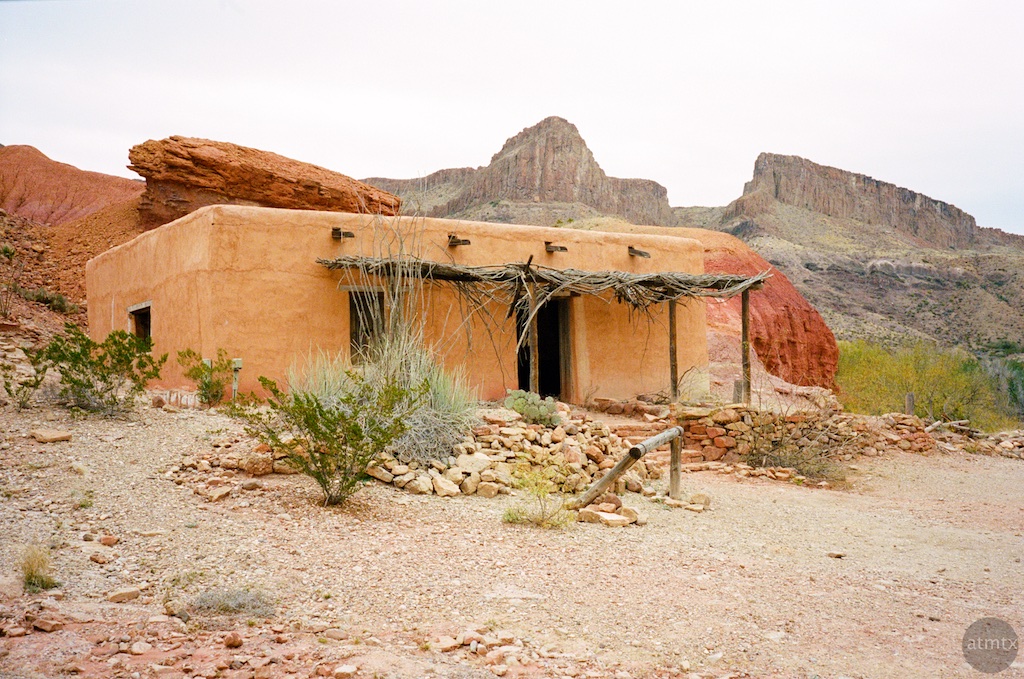 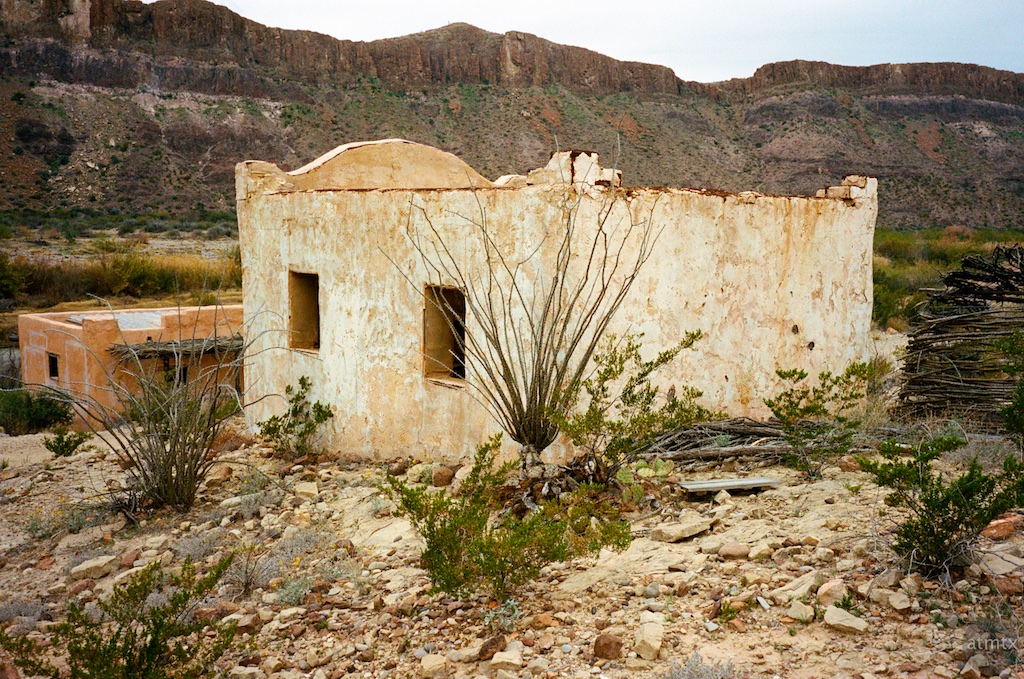 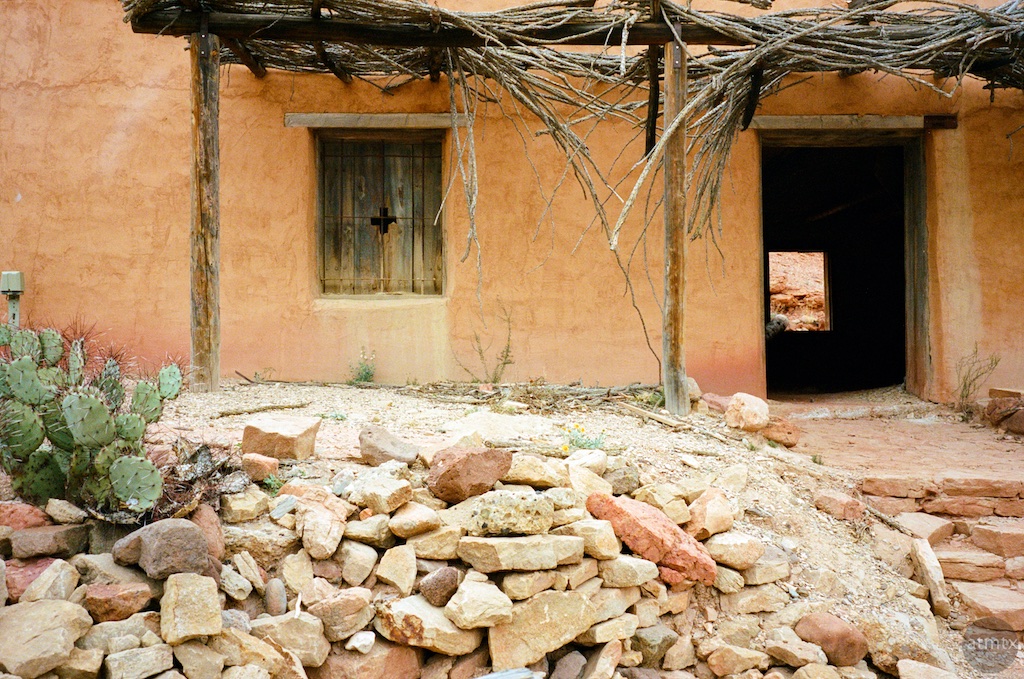 The 2nd day, we spend the bulk of the day at Big Bend Ranch, which is the Texas State Park that’s located next to the national park. Right off the road, not far from the entrance, is Contrabando, an old movie set. Several western B movies were filmed there. As you can imagine, my architectural interest drew me in for more of the man-made set in nature type photos. 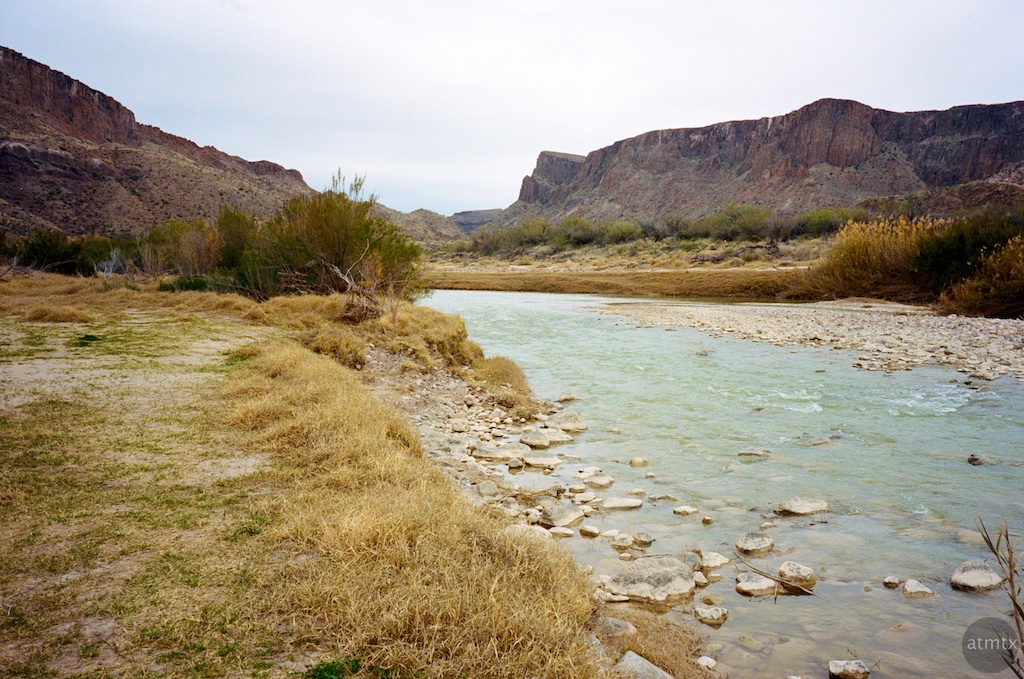 Behind the set was the Rio Grande again with its readily accessible border with Mexico. Incidentally, Big Bend is in a middle of a desert as is the Mexican side. The borders are permeable since no one in their right mind is going to be walking through the area. The tall mountains and the harsh climate forms a natural barrier going north or south. 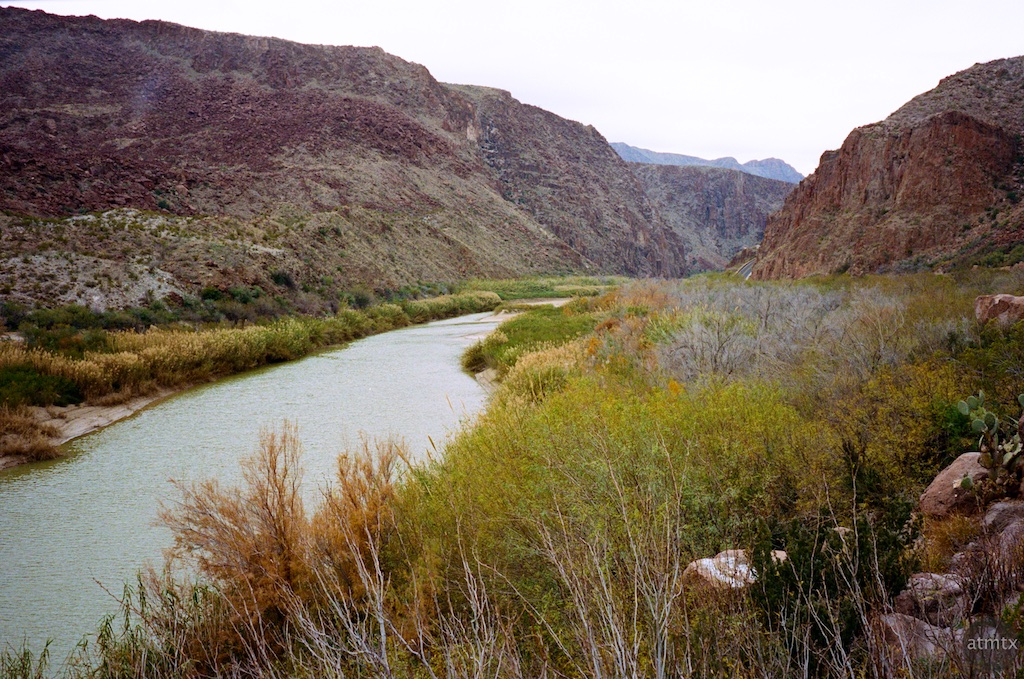 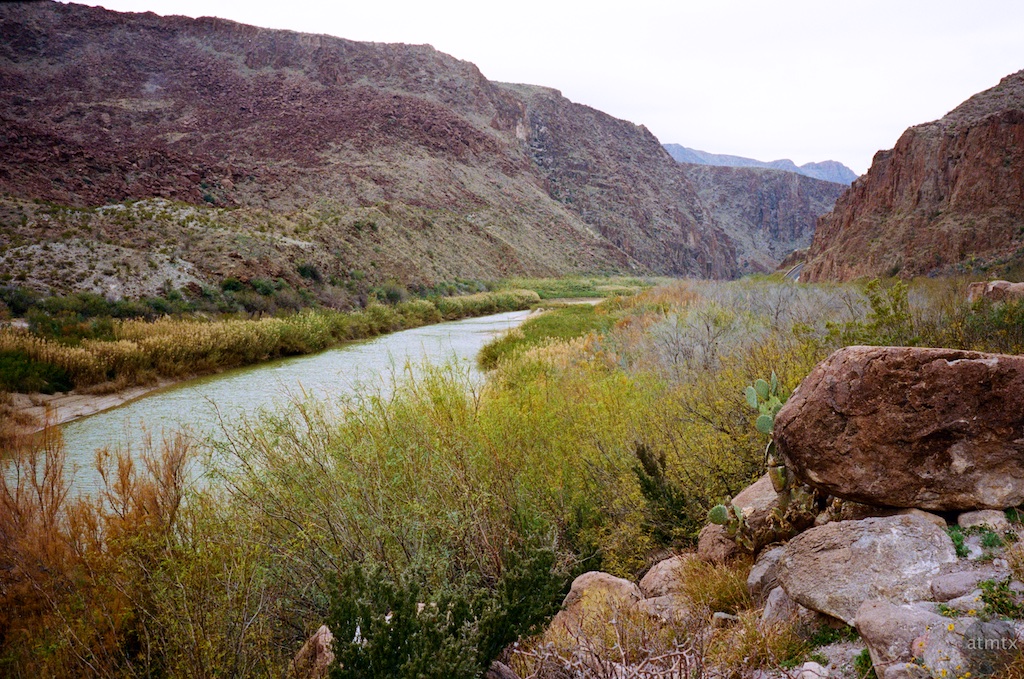 What’s great about the Big Bend State Park is the easily accessible dramatic shots right off the highway. We detoured several times at a rest stop and turn outs to get these dramatic views. Not much hiking involved, which is fine with me. I took all my gear including the tripod to shoot at these locations. The Nikon 35Ti though worked great handheld. It was truly an easy point and shoot experience. Not bad for a 20-year-old film camera, I say. 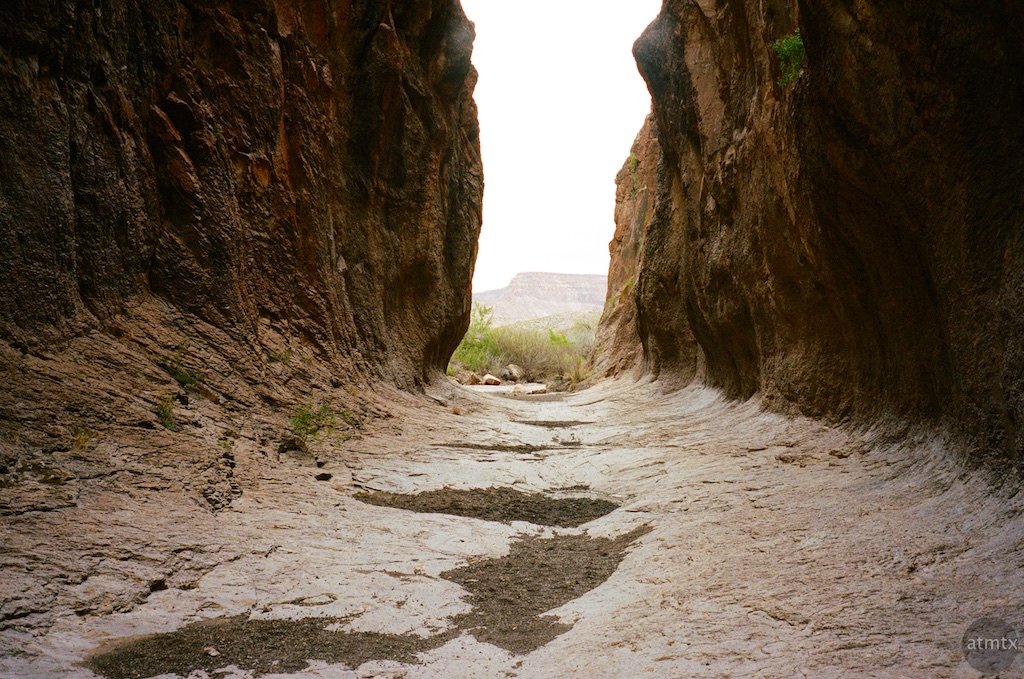 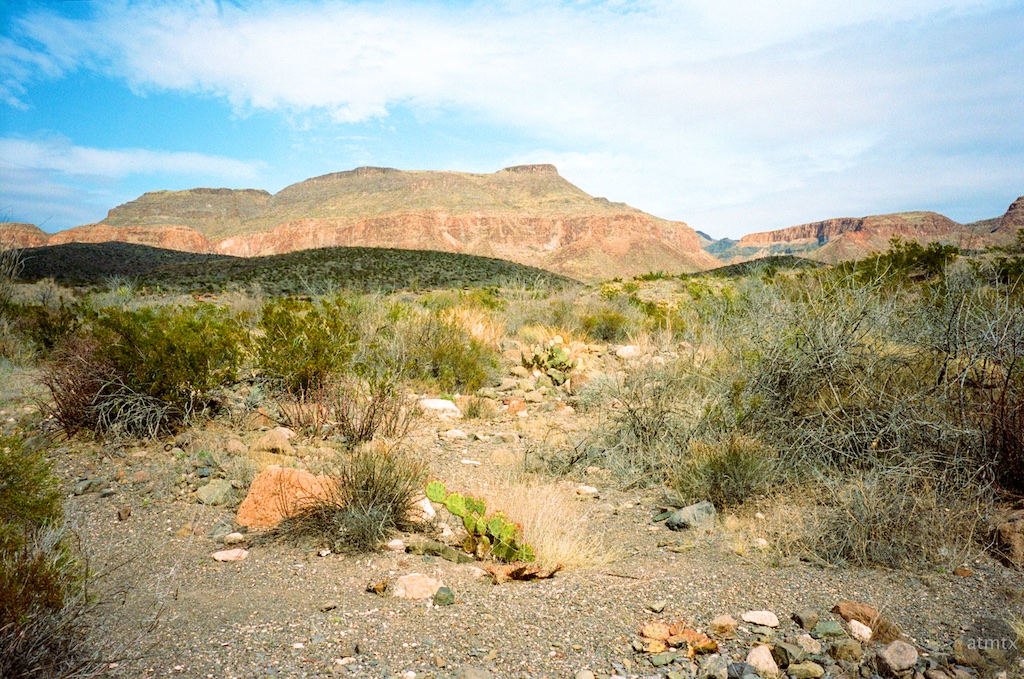 The highlight of the trip was Closed Canyon, where they shot the last scene from the movie Boyhood. It took a few snaps here with the Nikon as well as a whole bunch with my other cameras. I did my first real hike here, only about a mile and half round trip. The ground was more uneven than expected so the hiking boots really helped. 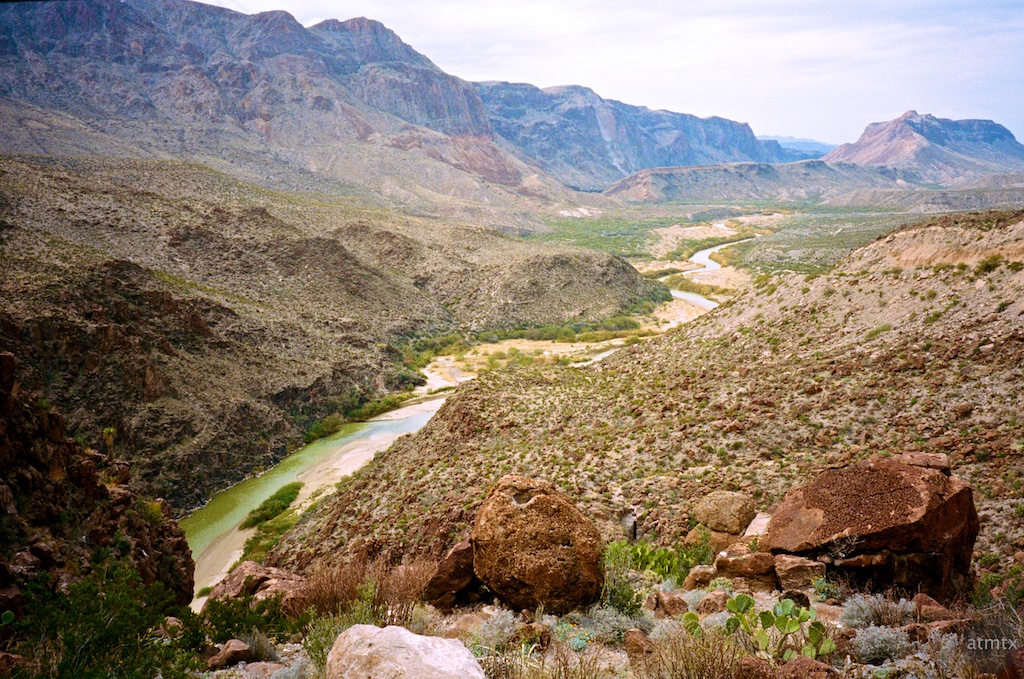 Finally, the last photos of the first roll were shot here, again just off the highway. It’s my favorite view from the entire Big Bend Trip. I think I shot nearly every camera from here and every photo looks different. It will make an interesting comparison for a future blog post.

It’s here where I switched out the Portra 400 roll for Velvia 100, which I shot for the rest of the trip with the 35Ti. I haven’t finished the roll but I’ll get that developed eventually to see if Velvia came out better on the Nikon than my medium format Mamiya 645E.

What struck me is that with 37 photos from the first roll, I covered a nice selection of scenes. I know I shoot like crazy with my digital cameras but selective shooting works great too. It’s so old school where you might only shoot several rolls per trip but end up with a lot of keepers.

I think the image quality from 35mm looks great too, depending on your target output. On my Retina 15” MacBook Pro, these images, full screen, look gorgeous. Lovely color, sharp details and not even a hint of grain. If all I wanted was photos for my MacBook Pro, 35mm would be more than enough. However, displayed on my external 27” monitor full screen, the image quality degrades somewhat.

These photos still look decent on the large screen but I can see difference compared to digital or medium format film. The grain is noticeable too though not really objectionable. This is the limitation of 35mm film. Displayed large, either on a monitor or paper, the image suffers.

People I know that shot 35mm told me that they feel comfortable with prints up to 8” by 10”. After that, sharpness begins to degrade. Interestingly, the 15” MacBook Pro screen measures 8” by 13”. Is it the perfect resolution and size for displaying 35mm? Perhaps. It’s not to say, these images can’t be blown up much larger. I’ve seen 35mm printed big and it can look nice, depending on the subject.

I’ll need to experiment more and even print some of those photos larger to see what they look like. But the surprising thing about the Nikon 35Ti, along with the Portra 400, is how wonderful these images look. They might not have the detail and resolution of digital, but I prefer the colors a heck of a lot more.