Here’s a change of pace from the Big Bend Nature photographs I’ve been posting lately. I went to a Drink and Click event like I do ever so often. Charles and Brett from Olympus was also there for another demo / photography / socializing event.

I brought my Pentax Q7 with the 40mm equivalent prime lens for some more experimentation, especially with black and whites. I felt a twinge of guilt bringing the Pentax to a semi-Olympus event but people know that I use all different brands. In fact, several of my photographer friends seemed amused, having fun guessing, how many and which cameras I had brought that night.

Actually, I also did bring an Olympus, the OM-D E-M10, which I borrowed for the Big Bend trip and was returning to Charles. I successfully created a wonderful star trail, which I talked about in my previous post — the LIVECOMP feature is perfect for this. What’s even more exciting is that I get to play with the brand new OM-D E-M5 Mark II for a few weeks. I picked it up already and started putting it though its paces. I’ll do some posts about it and culminate with a detailed review.

At Drink and Click, I really wanted to push the bounds of the tiny Q7 to see what it could do. I really like its in-camera black and white and it also works decently for low-light high ISO photography. These high contrast, inky black and whites are something relatively new for me. Something I started back in December, in Japan, when I first picked up the Q7.

I chatted with Marisa, a photographer and model, for a few minutes and shot a few portraits. These are definitely not text-book and I’m sure the serious portrait photographers will quibble with what I’ve done. But I like these. The dark shadows create more mystery, I think, and look different. The Q7, for me, is all about doing something different, and I think these qualify.

I also like these casual, candid snaps. They have more of a behind the scenes feel.

Taking shadows to an extreme, these two from the outside of ABGB (Austin Beer Garden Brewing Company) is an exercise in minimalism. With only a hint of shapes, the viewer is left to put the pieces together to form the image. In a way, it’s the anti-HDR. HDR tries to show lots of details, more than in regular photography. And arguably, the problem with some HDRs is the lack of shadows. Shadows add mystery. If that’s true, there’s certainly an abundance of mystery, or perhaps it’s disorientation, in these shots. 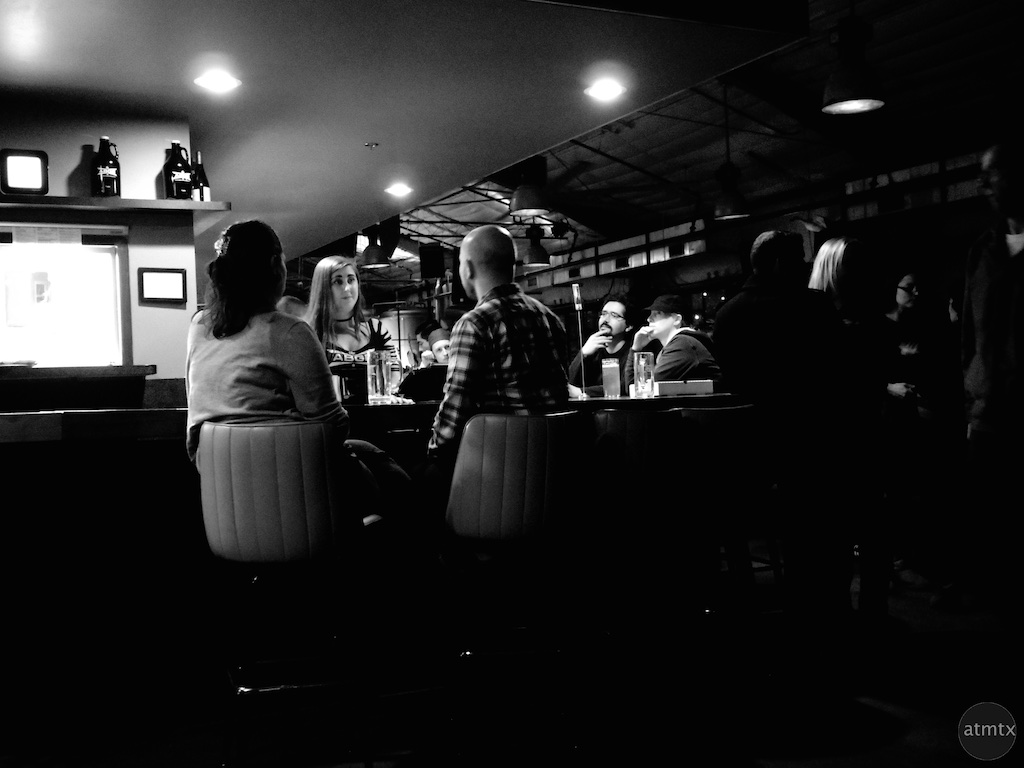 Back inside, this large warehouse like bar had plenty of interesting compositions. A little “street photography like” candids, as I explored.

In the Drink and Click area, I captured Natasha, another model, talking to Marisa. While models often jump into their model poses, I really like this candid as well as the silliness too, like the one at the top of the post.

You can see how organized Charles is from Olympus. Here’s one of his cases with notations of who borrowed which camera. I heard some 60 people might have come through, playing with the various OM-Ds. People got to test their favorite camera body paired with their favorite lens.

The “Clicking” at these events usually involve models. And over in the corner, Natasha posed for several strobe and light wielding photogs. I opted to catch natural light candids. These three images really pushed the bounds of this little Q7. I shot these at ISO 3200 at f1.9 and 1/20 of a second. Yes, it was dark. But I think these work.

Incidentally, that little camera held in frame, it’s the new Olympus OM-D E-M5 Mark II. Brett from Olympus was putting it through its paces. He’s nice enough to let me to shoot that camera for the next several weeks.

Finally, here’s one more of Natasha. It’s grainy and unsharp from motion blur. It’s the kind of photo I would have rejected before but I like it her expression. The photographer, in the shadows, gives context to what’s happening. Is Natasha tired, happy, board? Ambiguity and mystery, perhaps that more important than technical perfection. At least, that what I hope.

9 thoughts on “Drink and Click, the Pentax Q7 and more experiments with moody black and whites”