It was a quiet Monday night and I’m with Charles from Olympus at a small bar on Rainey Street. 6th Street in Austin is famous for night life, and I shoot there often, but most of it’s low-rent college kids and tourist stuff. In other parts of the city, you find a different vibe. Rainey Street is quieter and more upscale. Not in a pretentious way, rather it’s like being invited to a friend’s party, at their house. A block full of small converted clapboard houses, until recently a residential neighborhood, has turned into a hot alternative.

Charles and I had a drink at the aptly named “Bungalow”. Even on a usually slow Monday at 9pm, I was surprised that we were the only customers. In the corner, a woman performed solo, enthusiastically, to a nonexistent crowd. We had our new PEN-Fs to test and the-low light bar scene would nicely test its capabilities. Naturally, the lone performer would make an interesting subject.

You can tell from my previous PEN-F posts that I’m totally enamored with its film simulations. I keep switching back and forth between the Monochrome Profile 2, which renders a grainy film look and Color Profile 3 which gives a deep saturated look. The simulations are a new feature of this camera, as is a quick, front control dial that makes changing profiles, effortless.

Unlike my other PEN-F posts, however, I have post processed these images ever so slightly. I’ve lightened the shadows on the black and whites and cropped, mainly to fit the formatting of this story. With experience, for dark scenes, I’ve learned to add +2/3 exposure compensation to my black and whites, in camera. That gets me the look I’m after without post processing.

I often think of how much dedication it takes to perform in front of people, especially when there’s no audience. What do they think of when they sing their hearts out and no one is there to listen. Is it disheartening? Or is playing music so rewarding that it doesn’t matter? I guess that’s a dilemma many creatives face, like a photographer, artist or writer that has a limited audience. But for a musician performing live, it must be extra challenging.

These film simulations can be applied to videos too, in real-time. I haven’t played much with the PEN-F video, and in my review, I said this camera is targeted primarily to the still photographer. But as you can see, it does a solid job, especially for anyone creating casual videos. The 5 axis image stabilization does an admirable job for a steady-cam type feel. I used autofocus, which works well, though you do notice the occasional refocusing. Serious videographers would certainly focus manually to ensure rock steady and consistent sharpness. But again, with the lack of microphone and headphone jacks, this camera probably won’t appeal to the serious video crowd anyway.

For me, as a completely casual video shooter, it does the job. Perfect for capturing those vacation moments or even a performance in a dark bar. The vivid chrome film setting, used here, renders the scene with more saturation and contrast — which I like. You can make grainy black and white videos too, just select the Monochrome profile. 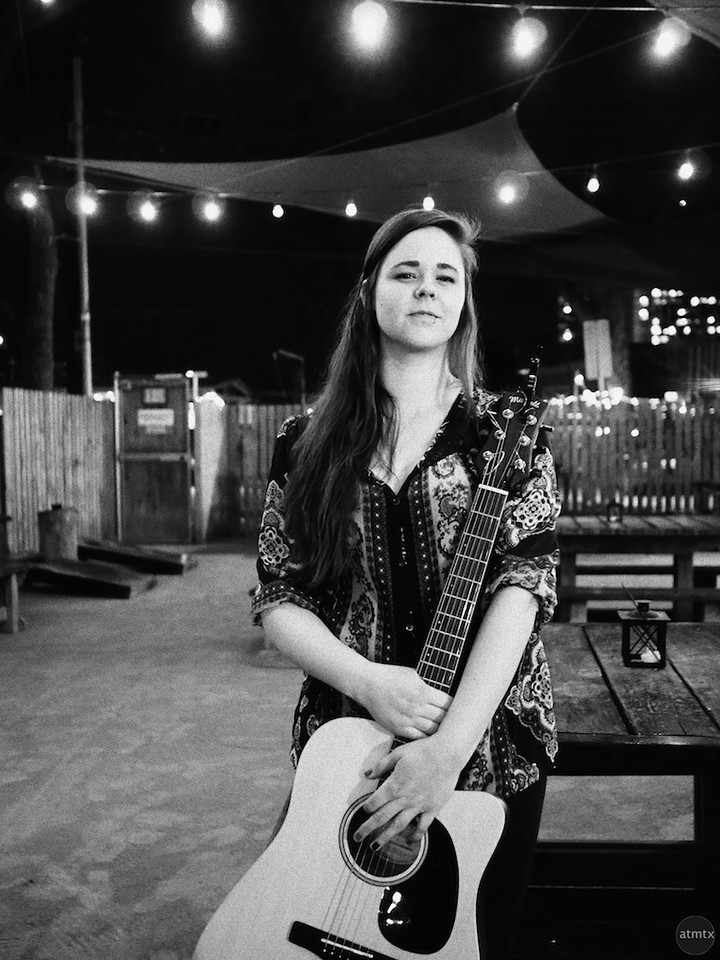 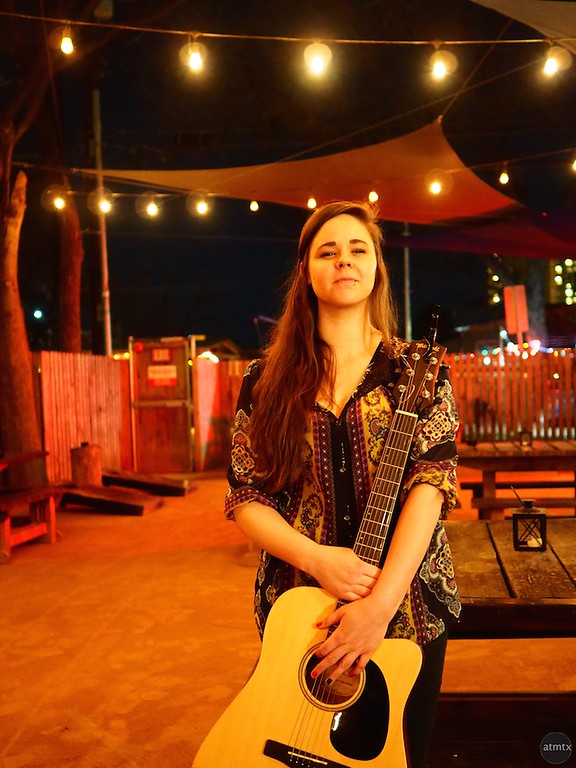 Charles and I struck up a conversation with Chelsea and we did a photoshoot in the backyard. Nothing fancy and certainly the dark conditions and inadequate lighting was far from ideal. But we had fun, sort of like we do at the Drink and Clicks that I talk a lot about on this blog. The musician with guitar composition is certainly nothing original, and all the camera effects is not going to make it a masterpiece.

It’s a snapshot, really, one aided with technology but with no real creative vision. But talking about camera tech, it’s worth noting that I shot this at f1.8, at ISO 4000 and at 1/15 of a second, handheld. Something unheard of in the film days, and even for digital, something that’s only possible recently. 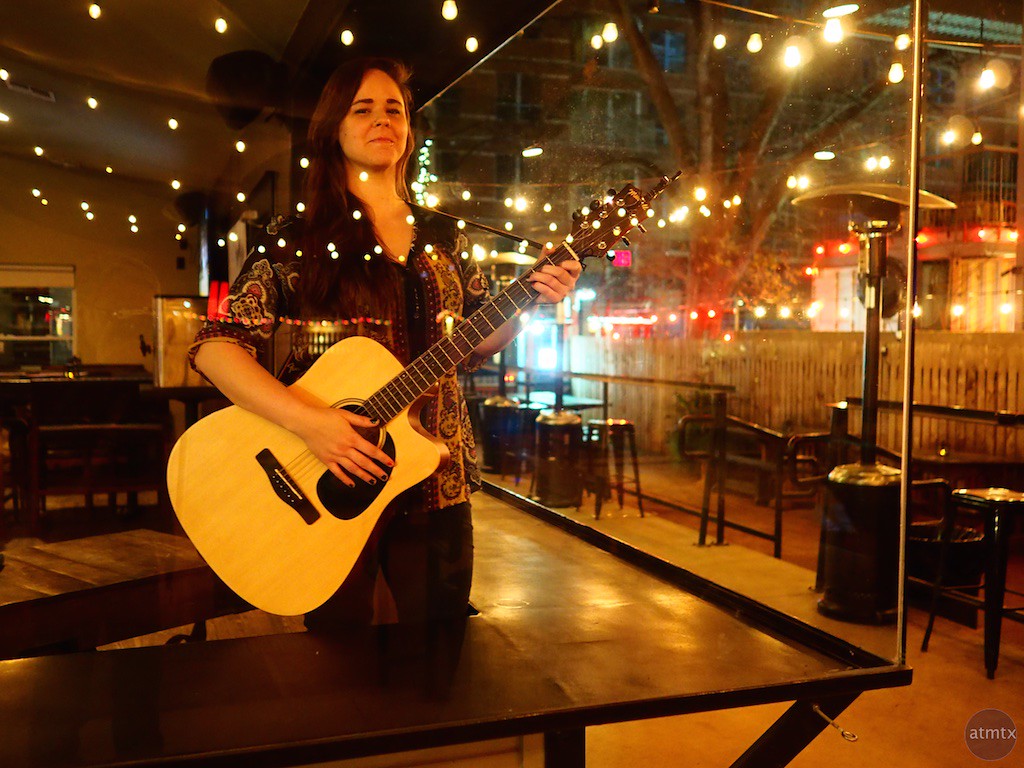 Finally, here’s two more of Chelsea. I’ve always liked the large, fish tank like window at this bar. The transparency and reflections make these images, perhaps, a bit more original. There is a certain casual-ness to all the images. They capture the that night, the mood of the place, freeze memories and provide visuals for a story.

The PEN-F is fully modern and capable of creating serious images — the kind that serious pro photographers labor over. But for me, these are the kind of everyday scenes that I love to capture. A little extra saturation or film-like monochrome grain — echoing a long past era — and the latest technology to enable easy shots like these. Images to document the stories of my life, some exotic but mostly mundane.

I’m happy to report that but 10pm, the bar began to fill up. The night scene in Austin started to spin up, on cue, even on a Monday night. But before the crowds, Charles and I got to hear a personal performance and attempt a little creativity of our own. It was fun to meet Chelsea and a nice way to enjoy the evening.

9 thoughts on “Olympus PEN-F: A personal performance on Rainey Street”