One of the best things about Precision Camera University (PCU) is getting to meet photographers, particularly after hours or socializing at lunch or dinner. I met Eleya and Greg over lunch on the first day. They run a business out of San Antonio where they organize model shoots. Eleya, who was modeling at PCU, had a couple of hours off and Greg, who’s a photographer, invited me to an impromptu photo shoot.

Luck would have it that a Corvette club was meeting at the same Hill Country Resort. The meticulously polished cars would make the perfect backdrop for their concept. The sun was setting and warm glow would add the perfect airy feel we all envisioned. Except it was a lot harder in reality, at least for me.

Unlike a pre-planned shoot, everything was not ideally positioned. There were numerous Corvettes but they were not placed where we wanted them. We needed to exclude less desirable elements, such as a blue Hyundai and parking signs. I found it really difficult to get the right angle which lined up the model, the car and the glow of sunset, especially with a long prime lens. The Olympus 75mm f1.8 is exceptionally nice but a single 150mm equivalent lens truly taxed my compositional skills. 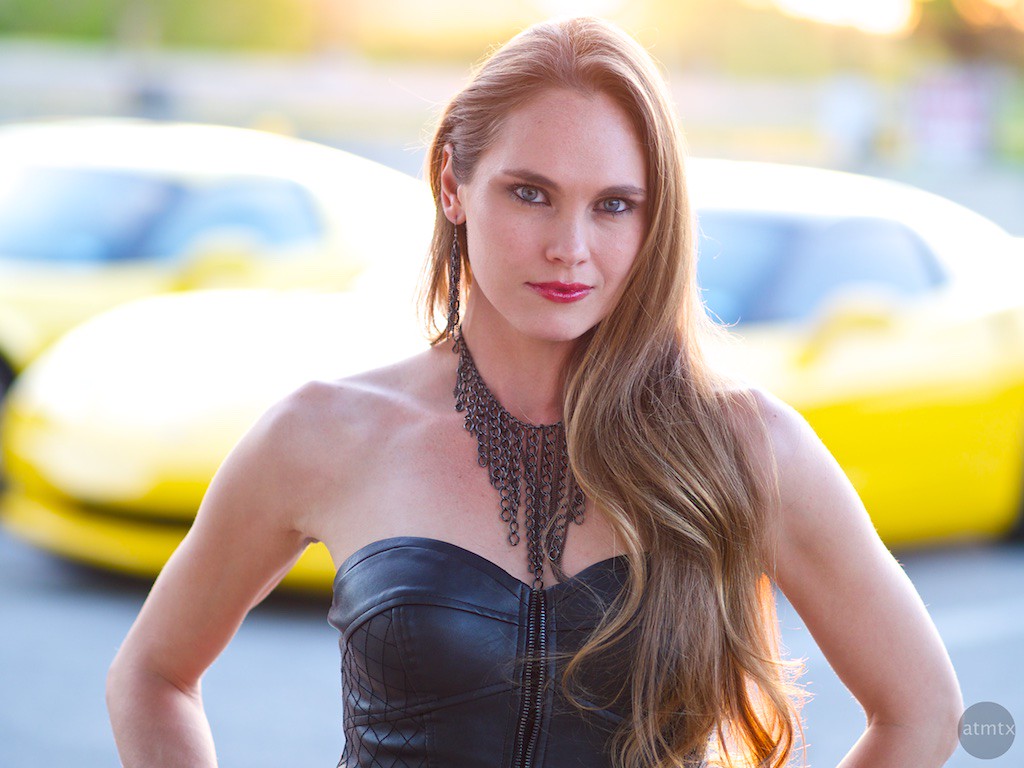 You see, when you shoot street photography or architecture, like I usually do, you’re not accustomed to directing and setting up a shot. It’s also been years since I photographed a model. My photography has honed my observational powers but manipulating the scene is not something that I typically do. We spent a while in front of a red Corvette but it just wasn’t working. Then I noticed a pair of bright yellow Vettes down a ways which, I thought, would work especially well, contrasting with Eleya’s black outfit.

Working with an experienced model made things fun, especially since she knows the popular model moves — it makes it easy for the photographer. She “strikes the pose” and all you have to do is shoot. I finally found the angle that I liked and I let Eleya do her stuff. We certainly achieved the “attractive model with a hot car” look that we were looking for. But what if we go for a different look? Something a bit atypical. 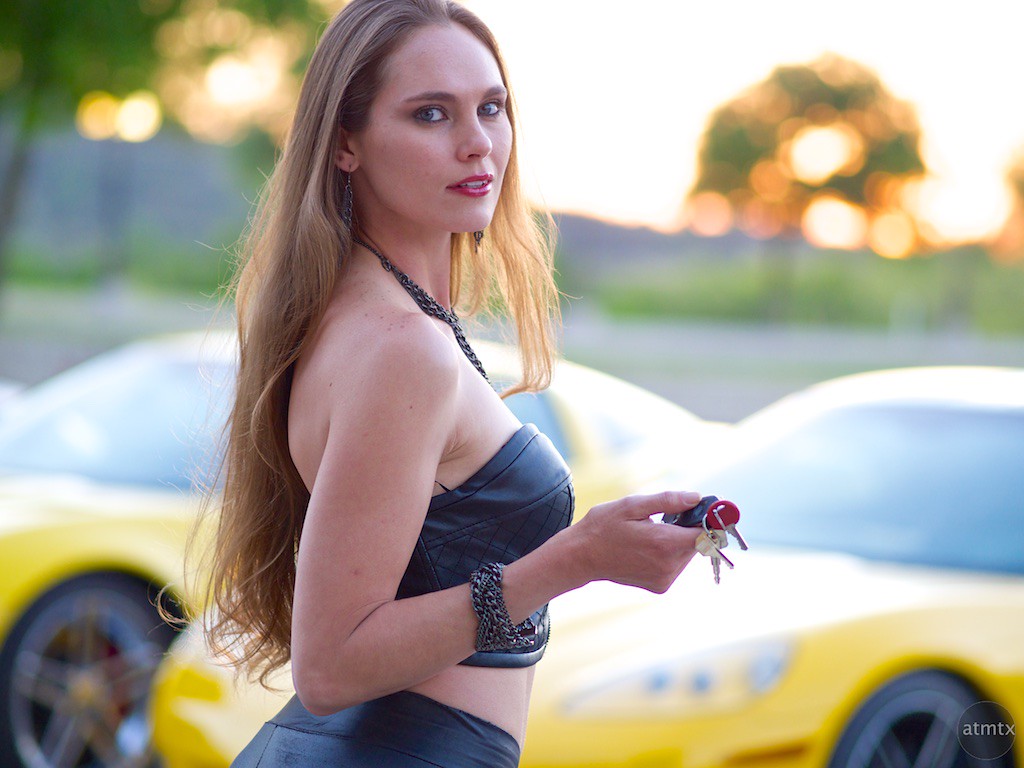 I wanted to add elements of street photography and create a back story to the shoot. Instead of posing in front of the car, what if Eleya interacts with the car. Perhaps, the yellow Corvette is her vehicle and she’s readying her keys. Or maybe, I caught her as she was trying to get in. 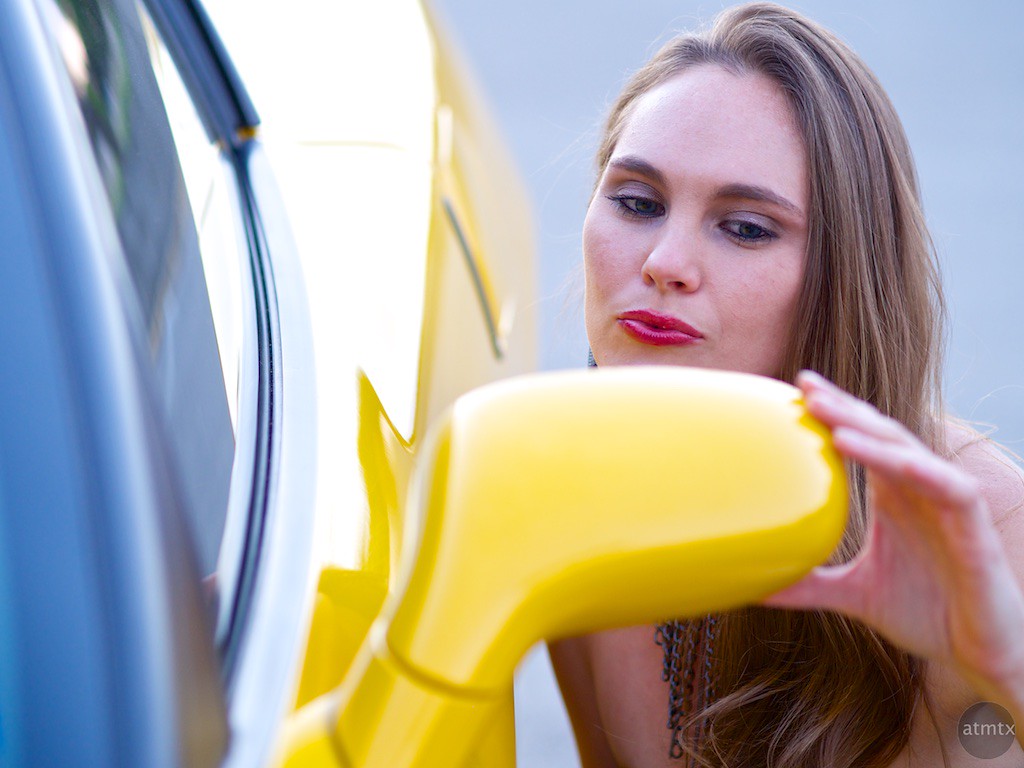 We came up with another story where she used the car to check her makeup. 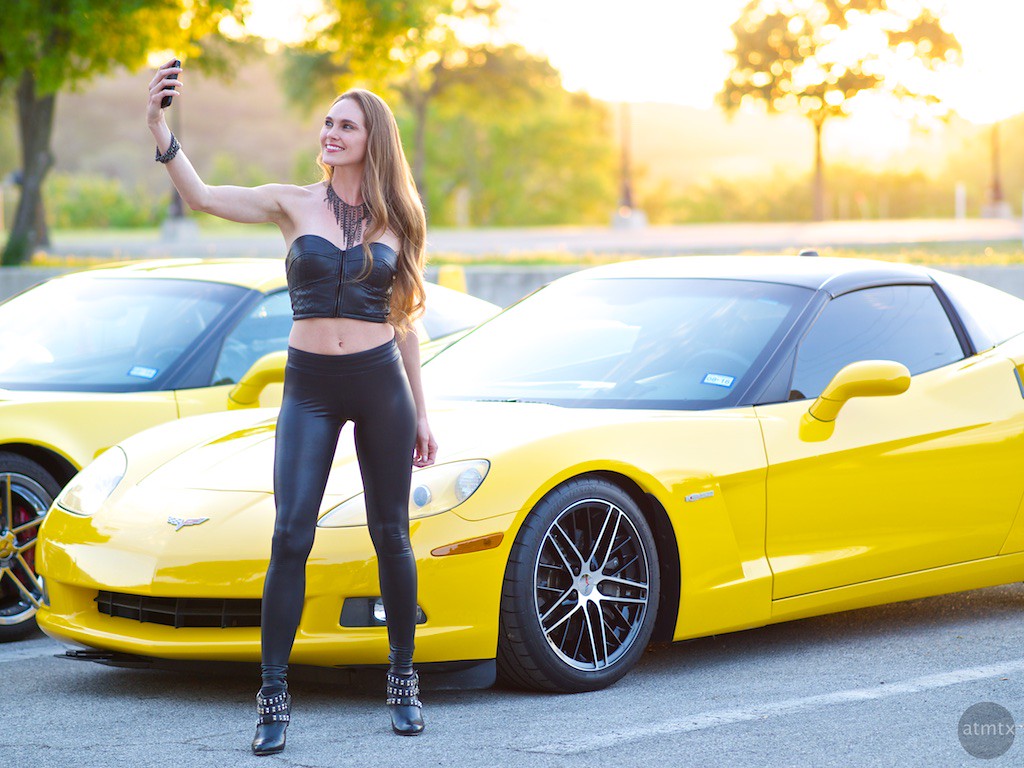 Finally, we hit upon my favorite concept. Eleya was all dressed up for a party and found a sexy Corvette and decides to take a selfie. I quickly handed her my iPhone and we tried it out. After a number of poses, this one’s my favorite. It has the most natural look that appears “captured” like street photography.

Except, it doesn’t look quite like street photography, of course. It’s a stylized blend of a candid capture with an idealized, etherial feel. At 150mm, I was standing way back and I purposely overexposed by 2 stops. It’s a style that I haven’t done much but I’m pleased with the effect. I really like this Olympus lens, and for a guy that usually shoots wide, I’ve fallen in love with this telephoto. I don’t typically associate shallow depth of field with micro 4/3 but here it is. It’s possible.

For an urban photographer, this was a nice change of pace. Something that I found challenging but I learned a lot by combining different elements. While shooting behind the scenes at PCU was fun, it wasn’t a stretch for me. This impromptu photo shoot pushed me in ways I’ve never experienced.

A big thanks to Eleya and Greg for letting me tag along. If you are interested in models in Central Texas, contact them. They represent models and organize model shoots. They’ll also work with you on custom arrangements, if you have a concept.