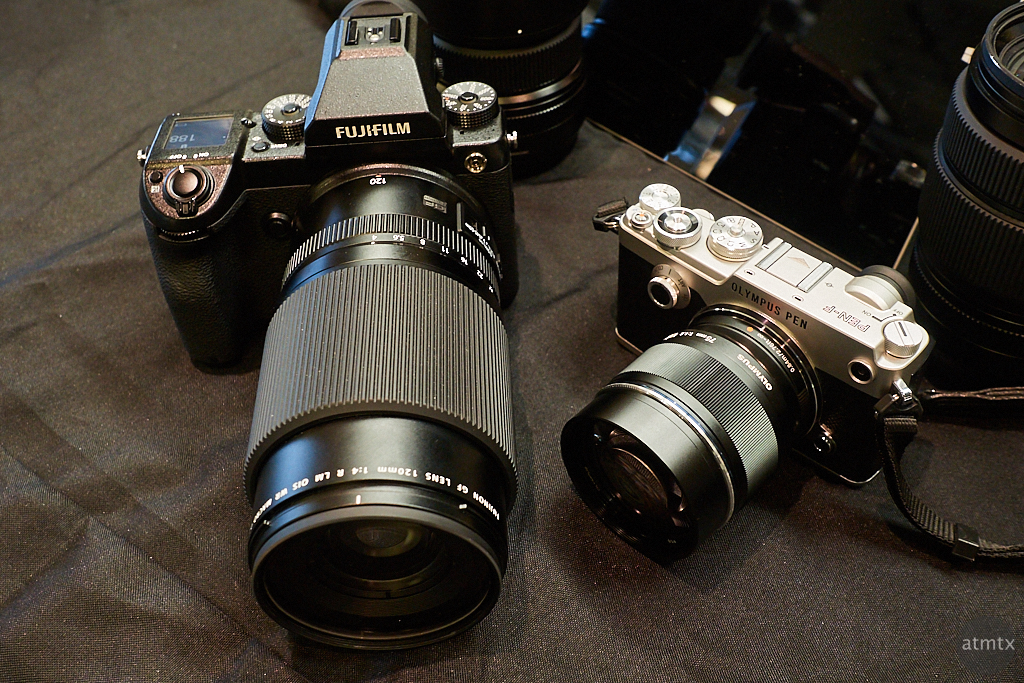 The local Fuji rep was at Precision Camera today, demonstrating the new Fujifilm GFX 50S, the 51MP medium format digital camera. I was curious, of course, and headed to the store after work. I had my Olympus PEN-F with me and took a comparison picture with the new Fuji. The Fuji looks huge, but looks can be deceiving. The PEN-F is relatively small, certainly compared to your average DSLR. The GFX 50S, is certainly larger than a full frame DSLR, but not by much. Also consider that the GFX 50S has a sensor that’s 6.45X larger than the Olympus. Given that, the size difference doesn’t seem bad at all.

I attached the Fuji GF120mm f4 lens, the largest of the 3 currently available lens, ideal for portraits. On the PEN-F, I have the 75mm f1.8, which is also a portrait lens, one of the larger Olympus prime lenses. In full frame equivalents, the 120mm Fuji becomes a 95mm, with a 0.79 crop factor. The 75mm Olympus becomes a 150mm. So the Olympus actually has the longer lens.

The GFX 50S is nicely built. At least on par with the Fujifilm X-T2, if not better. All of the dials click nicely and the grip is extremely comfortable, even with the large 120mm lens. There is a nice balance and the lens didn’t feel front heavy. There is certainly a family resemblance between the new GFX and the APS-C X line of cameras.

Anyone familiar with the Fuji X line, will feel at home with GFX. Similar controls, icons and menus keep things consistent. I was a little rusty with the Fuji controls, since it’s been a while since I played with my Fuji X100S, but my comfort level returned quickly.

The camera feels like a slightly slow, chunky full frame DSLR. But the focusing speed is adequate and not frustrating. There is a refinement, unlike many of other medium format digitals I’ve played with. The Pentax 645Z is huge by comparison and the larger lenses and slapping mirror made you think it was an entirely different kind of camera.

I vaguely remember the Hasselblad X1D, and as I recall, the focus seemed slow. I prefer the sleek design of the Hasselblad, however, and the minimal user interface made it feel like a more modern camera. But I have more confidence in the Fuji implementation. The classic, proven interface is probably more usable than the aesthetically clean Hasselblad.

I arrived too late to shoot the hired model, for the event, but Celissa was nice enough to stand in as I tested the Fuji’s portrait capabilities. I shot JPEG, since I don’t have a compatible RAW converter. The production firmware was installed, so these are real world, up to date images from the shipping camera.

I wasn’t crazy about the exposure and auto white balance in this first photograph. The straight out of the camera JPEG is on top and my post processed image, on the bottom. Even with +0.7 exposure compensation dialed in, the GFX still exposed dark for my taste. The white balance was also warmer than I like. However, I’m giving the camera the benefit of the doubt. This area at Precision is always a bit tricky to shoot properly. I’ve tested many cameras here and most of them have less than ideal color and exposure.

Here’s a better portrait shot at the front of the store, with more natural light from the windows. This a completely unaltered JPEG. Unfortunately, what these images don’t show are the incredible detail I’m getting from both the 51MP sensor and lens. It’s quite extraordinary, especially viewed on my 5K Retina iMac.

I tried to add an image sample at 100%, but it really doesn’t look as impressive, viewed on a lower resolution web page. In a way, viewing photographs on a 5K screen is sort of like looking at a print. You just see details that don’t translate directly to a JPEG on a web page. Even at 100%, everything looks tack sharp. At 200%, it still looks sharper than my typical cameras at 100%. Even 300% look pretty decent. Amazing.

The depth of field fall off is also very nice and with a creamy bokeh. The colors are also rich and saturated. While I almost always add extra saturation in post processing, I added none to these Fuji images.

This was a very quick test, to be sure, but I’m impressed. The camera made spectacular images. It performed solidly, with confidence. And while expensive, it breaks all records for being the most affordable medium format digital. It certainly seems like Fujifilm has a winner on its hands.