The D-200L is the first consumer digital camera from Olympus. It was announced on September 5, 1996. Information from back then is a little sketchy. DPReview lists the D-200L and the D-300L as the first cameras from Olympus. The Olympus Camera Museum website lists the Camedia C-800L as the first digital, also from 1996. The C-800L was probably the D-300L in the U.S. — manufacturers often release the same camera under different names, in different regions. The Japanese equivalent to the D-200L appears to be either the C-400 or C-400L.

I recently purchased the camera on eBay for a nominal sum. Why even bother with a 20-year-old digital camera? Just for fun and a sense of history. While I own many cameras from many brands, I have a soft spot for Olympus. I wanted to own the first digital camera they ever made.

The D-200L has a whopping 0.3MP (640 x 480 pixels) of resolution. Its bigger brother, the D-300L, has a 0.78MP (1024 x 768 pixels). They both sport a respectable fixed focal length lens, a 36mm equivalent at f2.8. They resemble bloated film point and shoots of the day — made of plastic and not especially inspiring. The camera is chunky by today’s standards, especially since it has a small 1/3 inch sensor. Its curvy design does make it easy to hold and the build is solid. 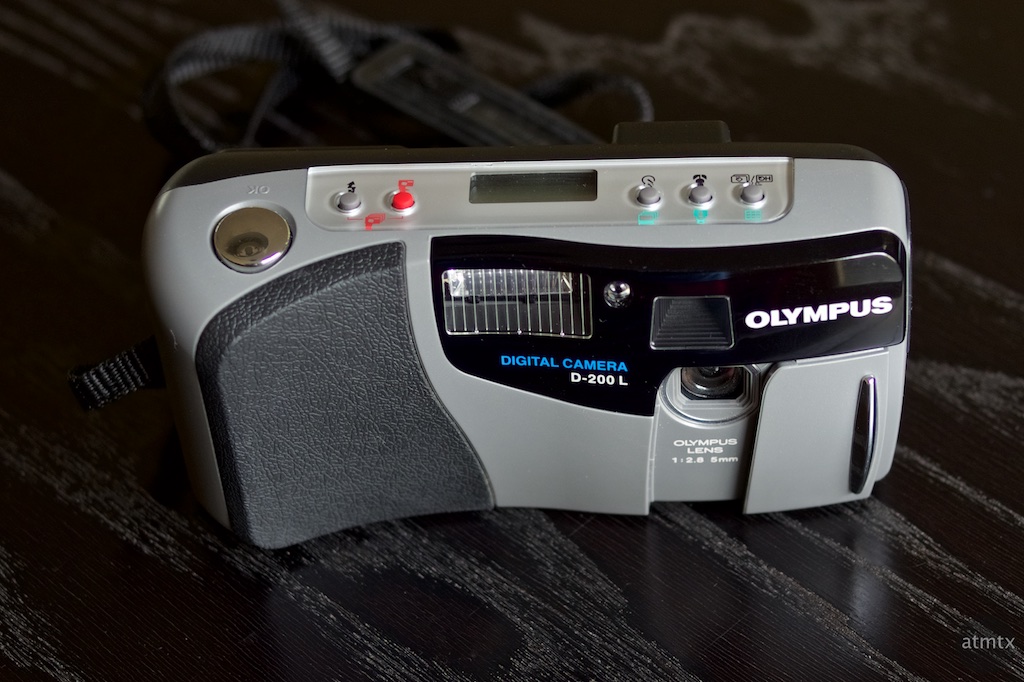 The camera turns on when you slide open the lens cover. The operation is slow but manageable and it does autofocus. It uses 4 AA batteries and is apparently very power-hungry. In fact, the rear 1.8″ LCD does not turn on unless you push a button. You can used the decent optical viewfinder to compose or hold the green button down to use the LCD. As soon as you release the button, the LCD turns off. There is no on-screen menu. All setting are changed via dedicated buttons.

I couldn’t for the life of me, figure out how to look at the photos that I took. Pressing the green button, which has a play icon, didn’t work. I found an online manual which unlocked the mystery. You have to first turn off the camera, by sliding the lens cover closed. Then the green button allows you to look at your images. The two gray buttons allow you to scroll forwards and backwards. The review is so slow that you can see the image draw, like a vertical scan, as you advance to the next photo.

My copy appears to work perfectly, except I can’t get the pictures off the camera. Back then, some cameras didn’t have any removable storage and I don’t have a compatible serial cable or a computer with the correct software to download the images. It would be an interesting challenge, to find the right cable, computer and software. Probably not worth the effort but a technological challenge, nevertheless.