The Archer is a new high-end boutique hotel that recently opened in The Domain in North Austin. It’s a beautiful hotel and it anchors the Northside development that is coming together nicely. Of particular interest to me, however, is the Archer licensed one of my photographs that they use in several of the rooms. I recently got to see the fully furnished room and took a few photos. A big thanks to John Magnuson who gave me a comprehensive tour of the facilities.

I actually got see to the Archer, before it was completed, which I blogged about three months ago. That unfinished room which I featured in that post, is now complete and ready for guests. I fact, the hotel opened for business in early September and I shot these on the opening week.

Different rooms feature different images, but all with an Austin or Texas theme. My photo of 6th Street is used in several of the Classic King rooms. It’s a cozy space complete with built-in closets, TV and desk. The bathroom is large, like all modern hotels.

I took these images with the Olympus OM-D E-M5 Mark II with the Olympus 9-18mm super wide-angle lens. It’s a 3 photo HDR, but interestingly, the 6th Street Backdrop is also a HDR. So in effect, we have a HDR of a HDR.

I shot the original photograph back on January 2014. It was one of 11 photos I featured in this blog post called “Waiting for the Perfect Night to Capture 6th Street”. It was just after a rain storm and the reflections off the wet pavement added another dimension. All were shot with the modest Olympus E-PM2 with the Panasonic 14mm f2.5 prime with wide-angle adapter. A setup that I used extensively back then.

I modified my original to the architect’s specifications. It was a complex mix of color and black and white, which added an artistic feel — something that certainly changes it from just a regular, albeit high saturated, photograph. This is the image that was printed as a wall covering that is used in the rooms.

It goes to show that, as a work of art, a 16MP sensor can be stretched to fill an entire wall. Would a 42MP full frame camera offer more detail? Sure. Would it have mattered to the feel of the room? Probably not. Want to look at the details? As with most of my posts, click on the image to see a larger size. 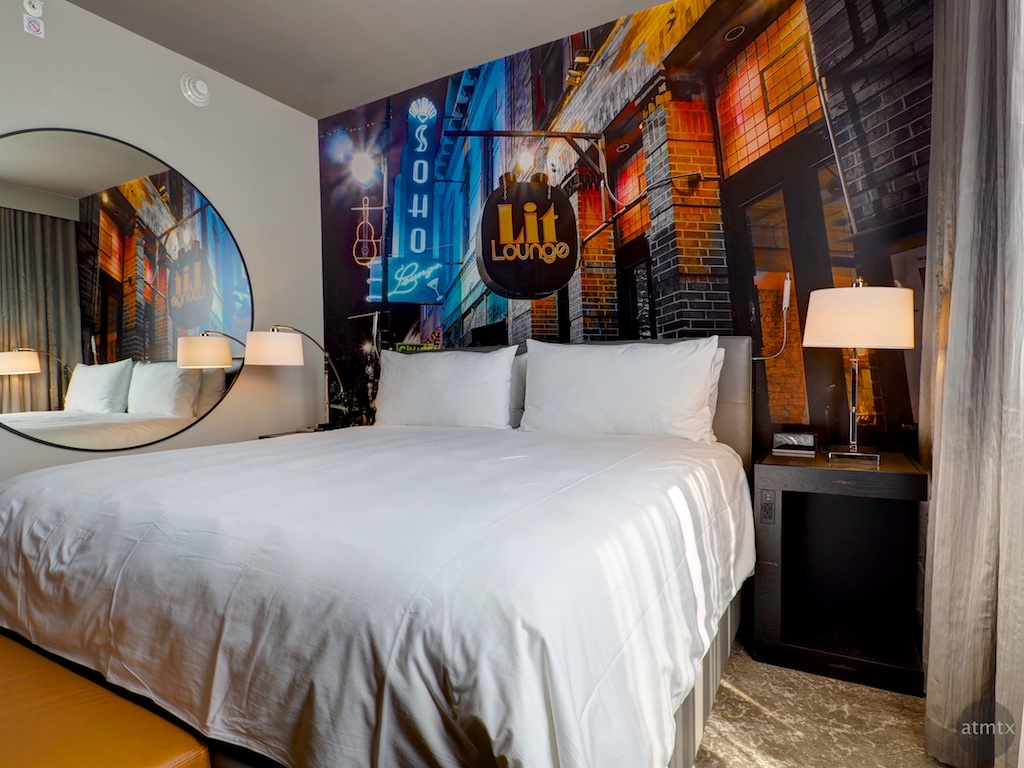 Here are a couple of more photos. I like how the architect used that large round mirror. It makes the room feel bigger but it also adds a dynamic and graphic element. One that changes depending on the angle. I think it works because the backdrop is so bold and colorful. A reflection of a boring background certainly won’t work nearly as well.

9 thoughts on “My photograph at the Archer Hotel”