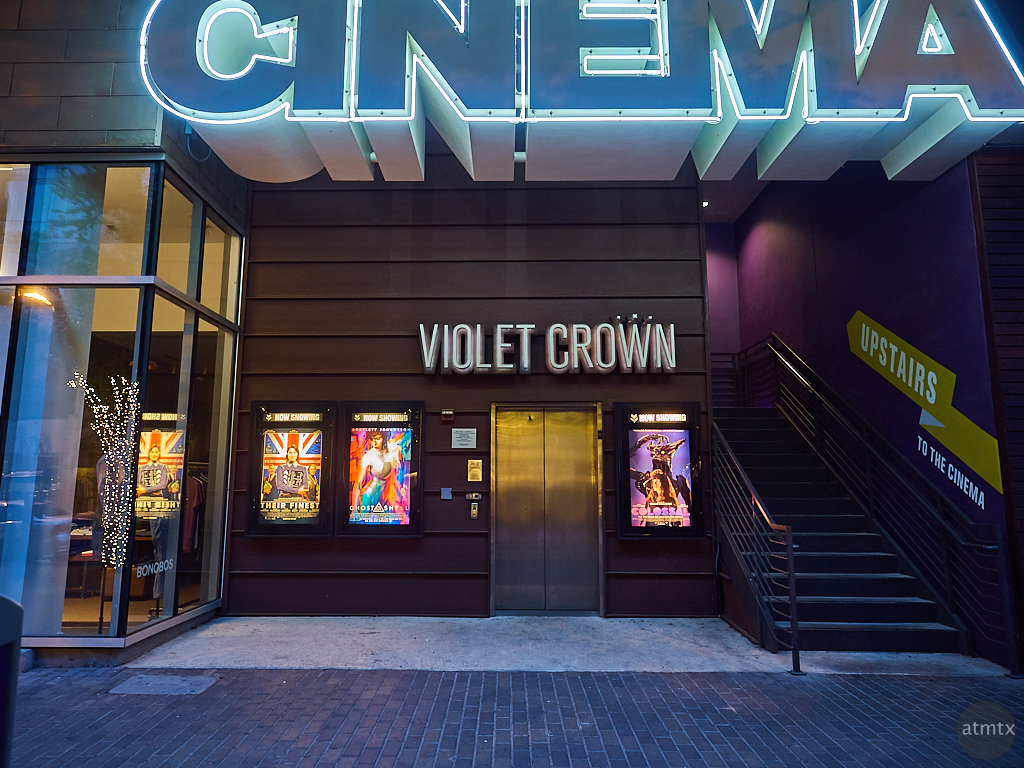 The movie theaters have gotten nicer these days. They don’t match the grand architectural palaces of the golden age, before TV. But, I’m sure, to counter the readily available content from the Internet at a touch of a button, these movie houses needed to adapt. They are more like destinations, which you can enjoy with friends.

The Violet Crown, in downtown Austin, joins the other Austin bred Alamo Draft House, and has food and drinks during the movie. I’ve yet to watch a movie there, but they usually feature more independent and art house movies. The Alamo is a larger chain with may locations throughout the city.

The name, Violet Crown, was a nickname for Austin way back. It’s something I found out fairly recently, after seeing the reference in several places. Before the city was officially named Austin, it was a small settlement called Waterloo, which name also appears around town.

I’ve featured a lot of urban landscapes recently, which I took on a photowalk two weeks ago. I’ve talked a lot recently of maximizing dynamic range so I didn’t need to resort to HDR. This is another one of the studies, shot at 1/15 of a second, without a tripod.

I under exposed 1 2/3 stops to preserve the detail in the neon and movie posters and lifted the shadows in post. I could have made it even brighter, but opted to keep it somewhat dark to add mystery. The movie posters retain a good amount of color and detail, which in the past, I would need to do with layer blending, after creating my HDRs.

Overall, a worthwhile experiment with promising results. I’ll need to push the post processing to see where it breaks — throwing it increasingly challenging scenes.