An eclectic crowd was the first sign that something was up. Turns out, a hip hop concert was scheduled after the SXSW Drink and Click. My curiosity was rewarded with concert photos that exceeded my expectations.

I first met Melissa as an impromptu model, who got drafted into our photo event. It was probably awkward for her, surrounded by photographers. She was a real trooper though, mixing in with the photo crowd.

Once on stage, however, Melissa was on familiar territory. A somewhat shy model transformed into a dynamic performer. Reflexively, I used the Olympus 75mm f1.8, already attached to the PEN-F, to take concert shots. Quite unexpectedly, the lens worked really well. 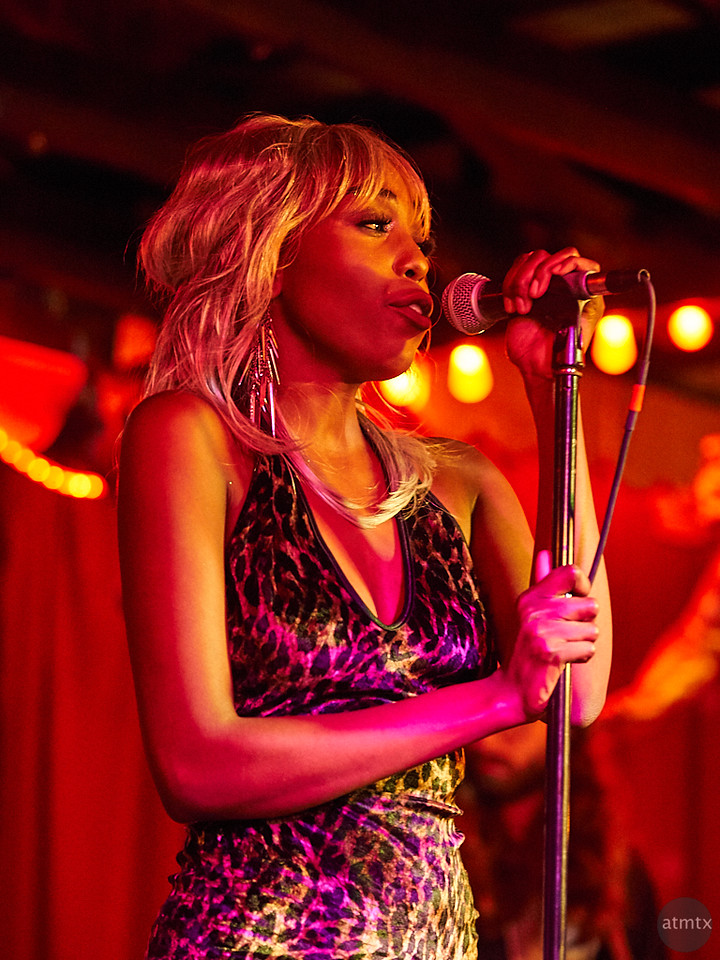 I’ve always thought of the 75mm f1.8 as a portrait lens. At least, that’s why I bought it. But, as I discovered, it’s a lot more versatile than expected. The 150mm equivalent reach, worked well to shoot the stage and the f1.8 aperture certainly helped. I managed to keep a decent 1/80 to 1/100 per second shutter, to reduce blur.

Luckily, Melissa wasn’t jumping around on the stage, because it was going to be difficult to eek out a faster shutter speed. Even with a wide aperture, I was still at ISO 3200 or higher for most shots.

There were other lenses I could have used, for a wider perspective. My 45mm f1.8 or 25mm f1.4, would have worked in low light and would have offered a 90mm and 50mm equivalent.

In retrospect, the 75mm f1.8 was the perfect lens. It allowed me to get close, and shoot compositions that gave an intimate feel. In effect, I was making a portrait, but on stage, during a performance.

And rather than pigeonholing lenses for a specific, preset purpose, I should just think of them in terms of focal length and aperture. Then the 75mm simply becomes a capable low-light telephoto.

Finally, a wide-angle to give context. At a 34mm equivalent, it’s not extremely wide, through that’s relative, I guess. Compared to the narrow angle of view of a 150mm, that is. I had the 17mm f1.8 attached to my other camera, the Olympus OM-D E-M5 Mark II, but I didn’t shoot it much. While this wider angle would have been my usual framing, I was having too much fun with my new favorite, up close lens.