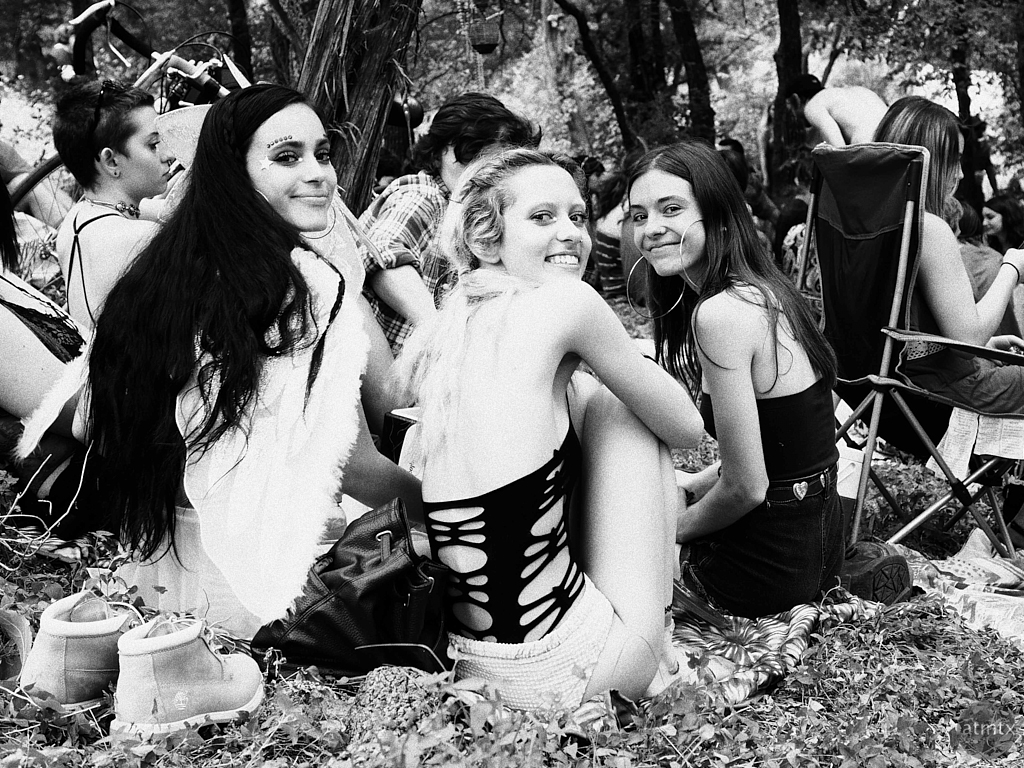 The annual and long-lasting hippy hangout, Eeyore’s Birthday Party, took place a week ago, Saturday. Its 54th year. I’ve only gone to the last five, driven by my interest in photography and documenting the weird and wacky in Austin, Texas.

There is a certain consistency and predictability with the core of my blog posts. I cover SXSW, the Rodeo, the giant ROT motorcycle Rally, Halloween and, of course, Eeyore’s, among others. But, I usually try to change my coverage from year to year. I shoot them with different cameras or different styles. Partially to keep things fresh, but also, there are underlying currents to my photographic exploration.

My current twin themes of exploration have been gritty, film-like black and whites, created mostly on my Olympus PEN-F, and shooting long with my Olympus 75mm f1.8 lens. Today, I feature black and whites from the Olympus PEN-F. These are straight out of the camera, without any additional post processing, except for the first photo, where I cropped in, to improve the framing.

Beyond the unique and festive atmosphere, Eeyore’s is an opportunity to run into photography friends. The event, understandably, is a magnet for photographers. I met pro photographers, including my friend Kirk Tuck, as well as enthusiasts I’ve met through Drink and Click. Just talking and having a mini-reunion with my friends is part of the attraction.

Kirk and I agreed that the mood this year was a bit different, and for the better. Maybe it was the weather, with a 40% chance of rain, which luckily didn’t materialize, or perhaps some unseen cosmic undercurrent that attracted more festive folks. We saw less “frat” guys and more free spirits.

I also didn’t see any tactical photographers in photo combat gear. You know the type. They have elaborate shoulder harnesses with pro-looking DSLRs with huge lenses hanging from each shoulder. Those guys just don’t fit the mood.

Having a small, classic looking PEN-F, with a single 50mm equivalent prime lens is more my style. That’s what I used to shoot these photos. I even felt a little self-conscious and too “serious” whenever I brought out my second camera, with the 75mm f1.8 equivalent lens. Less is generally more at these things. And a great opportunity to shoot with small, minimal gear. 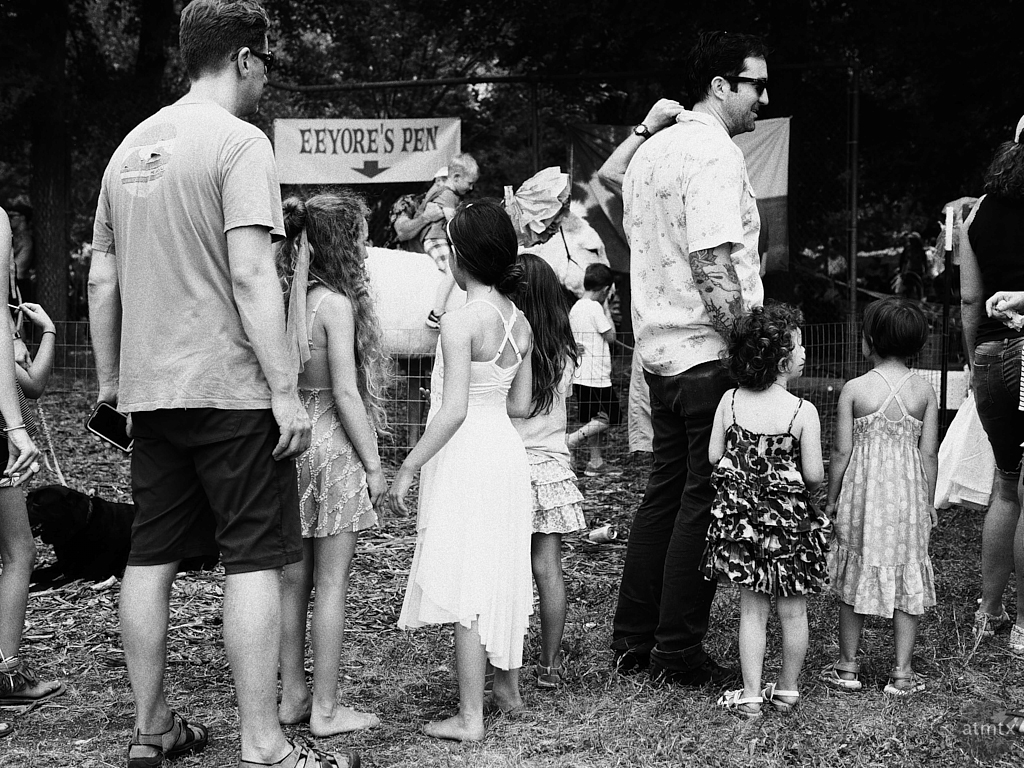 Eeyore’s is generally the same every year. There is a structured food and vendor area near the entrance and a stage for live music, this is Austin after all. The kids areas are generally near the playscapes. Then the free-floating drum circles, acro-yoga and jugglers ebb and flow near the open field. And on the periphery, in the woods, small groups hang out.

I think the grittiness of these black and whites seem about right — there is a greater sense of authenticity. Last year, I also shot Eeyore’s in black and white, with the Leica X Vario. Those photos are technically superior, both sharper and cleaner, but I think this year’s images have more character. They are muddier and softer and somehow more analog in feel. Maybe I’m just aping a bygone film style, but there is a synergy with Eeyore’s. 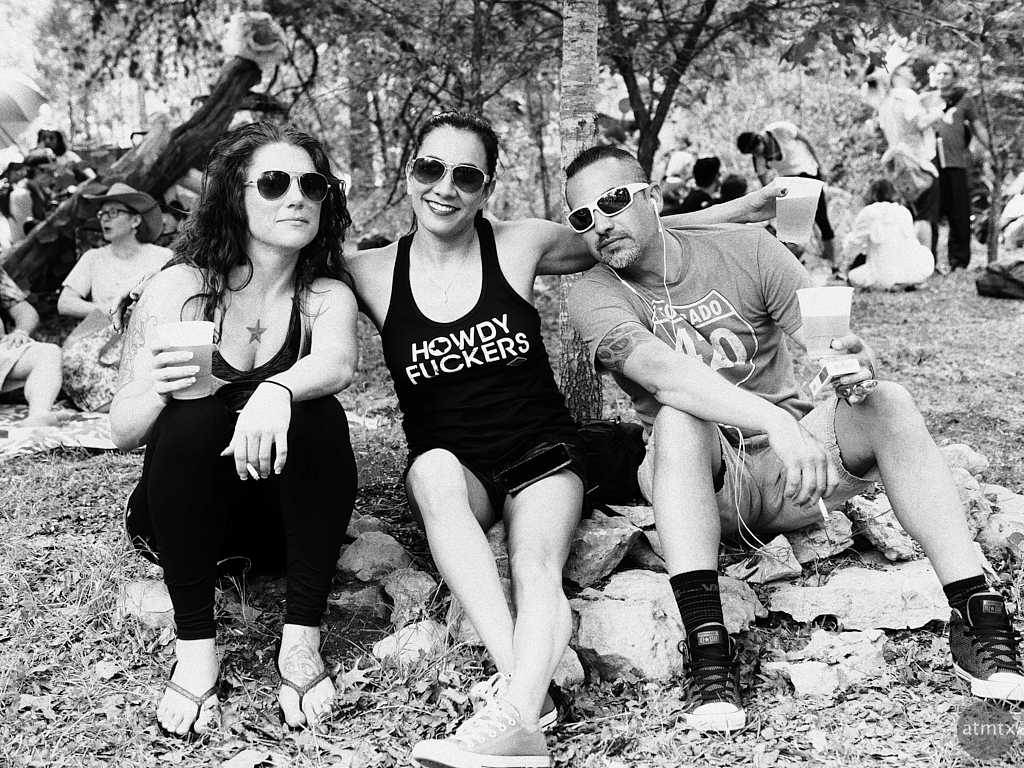 These photos are clearly of our time and all of the retro film simulations are not going to change that. Imagine what the people in the 60s would have thought about selfies? Taken with a telephone that has no wires? Everyone now knows exactly what these guys are doing. 50 years ago, no one would have a clue, even after explaining the technology and cultural phenomenon. It was a completely different world.

On the other hand, some photos look timeless. I like these because they can almost pass for images from another era.

I particularly like to capture authentic moments during the crazy drum circle dancing. I found it challenging this year, shooting with a 50mm equivalent within the circle — which is more like a disorganized collection of gyrating bodies moving to rhythmic drumming. The 50mm requires some open space, which was harder to find. That’s when a 28 or 35mm equivalent can work better, in these tight places.

What really attracted my attention this year, were the acro-yoga people. I don’t remember as many of these half angel, half butterfly dancers in the past. The sheer fabric wings floated wonderfully behind as they danced. 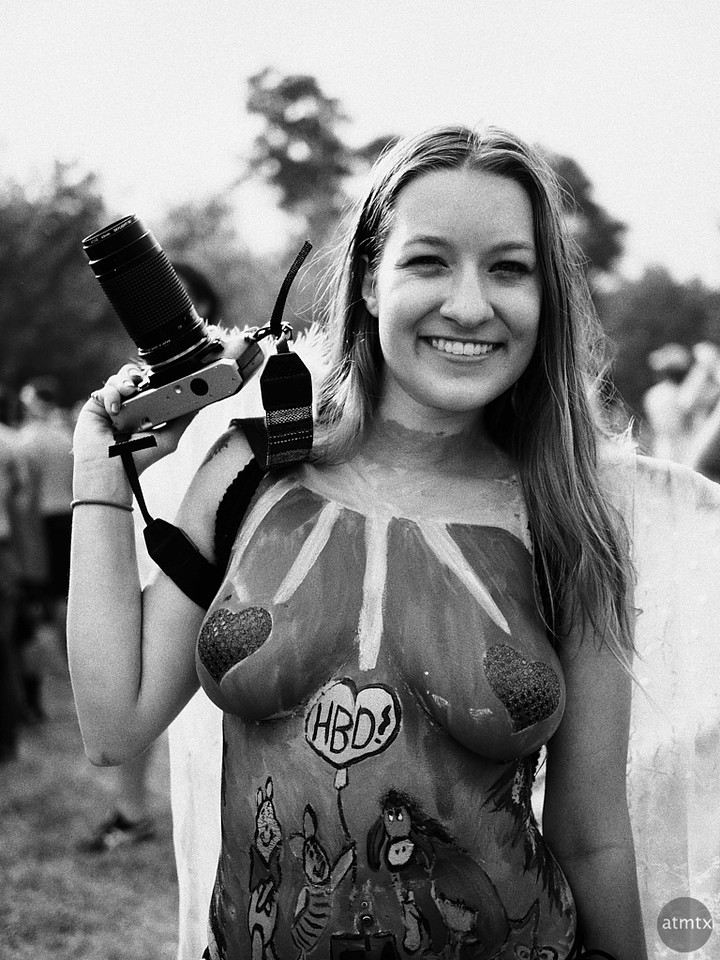 I saw a fair number of film photographers this year. Probably more than in previous years. The woman above had a Nikon film SLR. I saw several with classic film cameras from the 50s, including a twin lens reflex. There were even some medium format film shooters, including a diminutive woman with a giant Pentax 67. That camera looked like it was 1/3 of her size and weight.

The mostly overcast skies made it easy to take well exposed images. I shot a lot as usual, some 750 images just with the PEN-F. I narrowed my keepers down to 169. I could have easily posted more on this Photo Essay but decided to keep it down to a “modest” 18 images.

Here’s a few more as I wrap up this post.