When I rolled into town with my son a year ago, I didn’t know much about Texarkana. We were on our way to Memphis and Texarkana was a convenient half-way point from Austin. We found a budget friendly Hampton Inn off of Interstate 30. Being an urban photographer, I was curious about downtown and my quick visit yielded some wonderful photographs.

Clearly Texarkana, at least the central core, has seen better days. But, I didn’t want to give the impression that everything was in a state of decay. That’s why I feature the Perot Theatre as my lede photo. This theatre along with some city buildings have been beautifully restored. So when I talk about the magnificent buildings of Texarkana, I choose to see the beauty that remains. And perhaps someday in the future, these structures will be restored to their original grandeur. 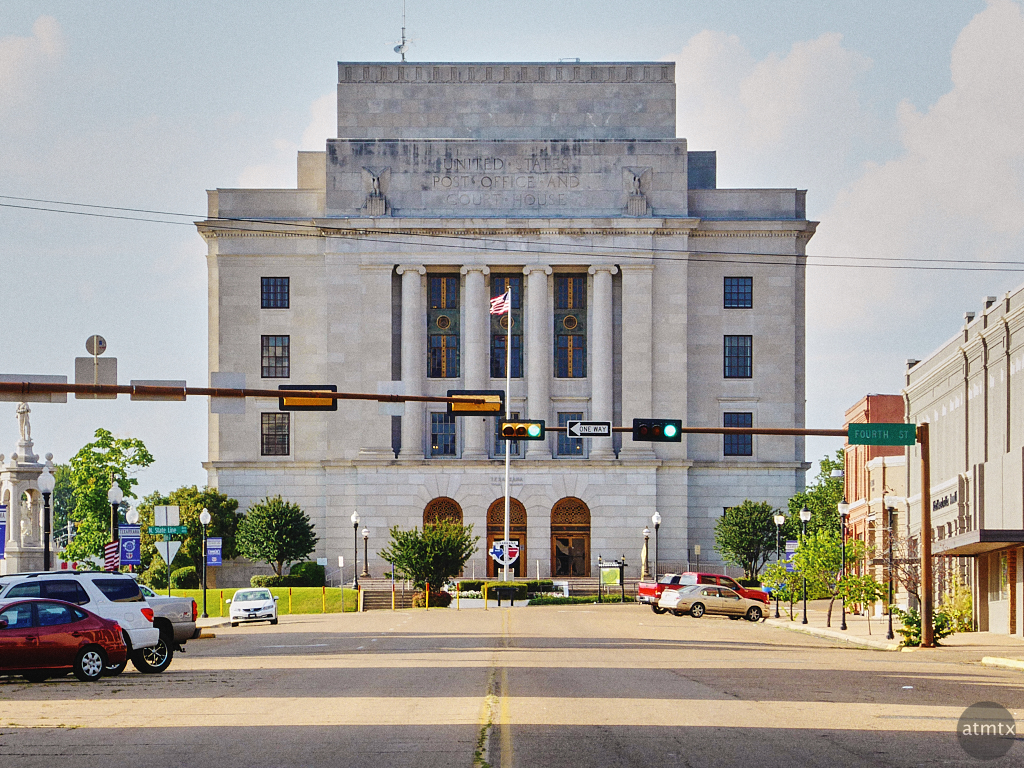 Texarkana is one of the few cities in the U.S. that is built in two states. Here, dramatically, you can see that half of the U.S. Post Office and Courthouse is in Texas, the other in Arkansas. The flag pole and the painted yellow line is the state border.

Much of the buildings around the courthouse are nicely kept. It wasn’t until I walked a few blocks away, when I started to see the once grand structures.

Much of the wonderful detailing remains. Here I used a telephoto to layer details from two different buildings. 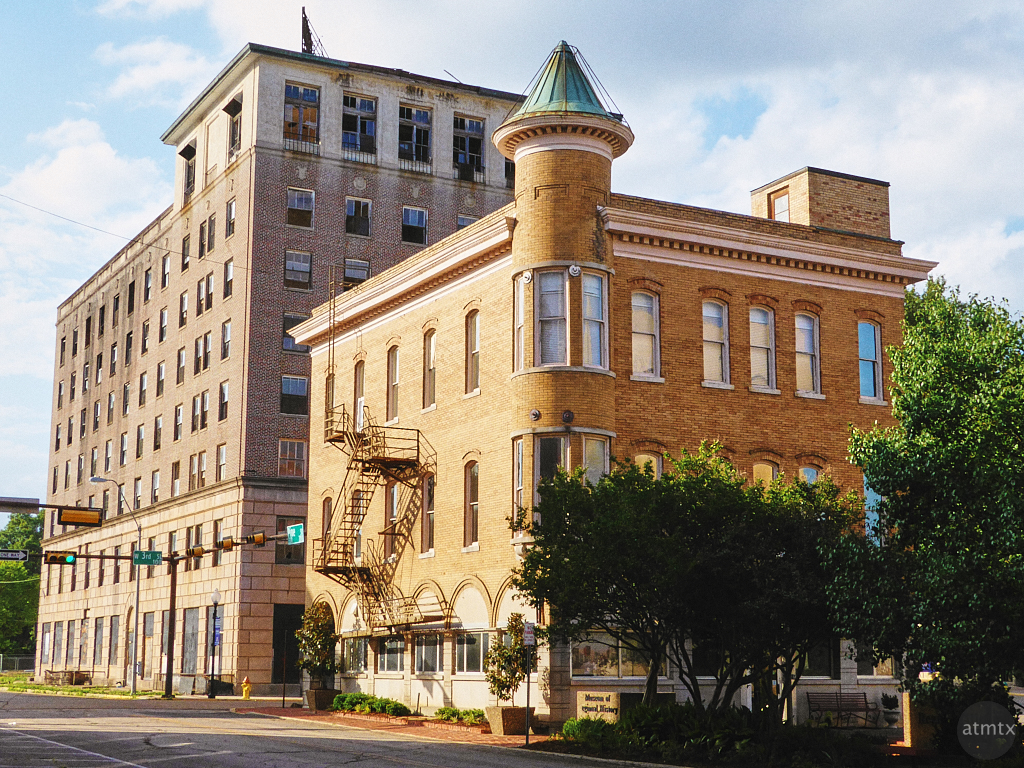 What the old cities do so well is a sense of proportion and variety. Victorian buildings, with their ornamental flourishes, mix well with more blocky, pragmatic structures. 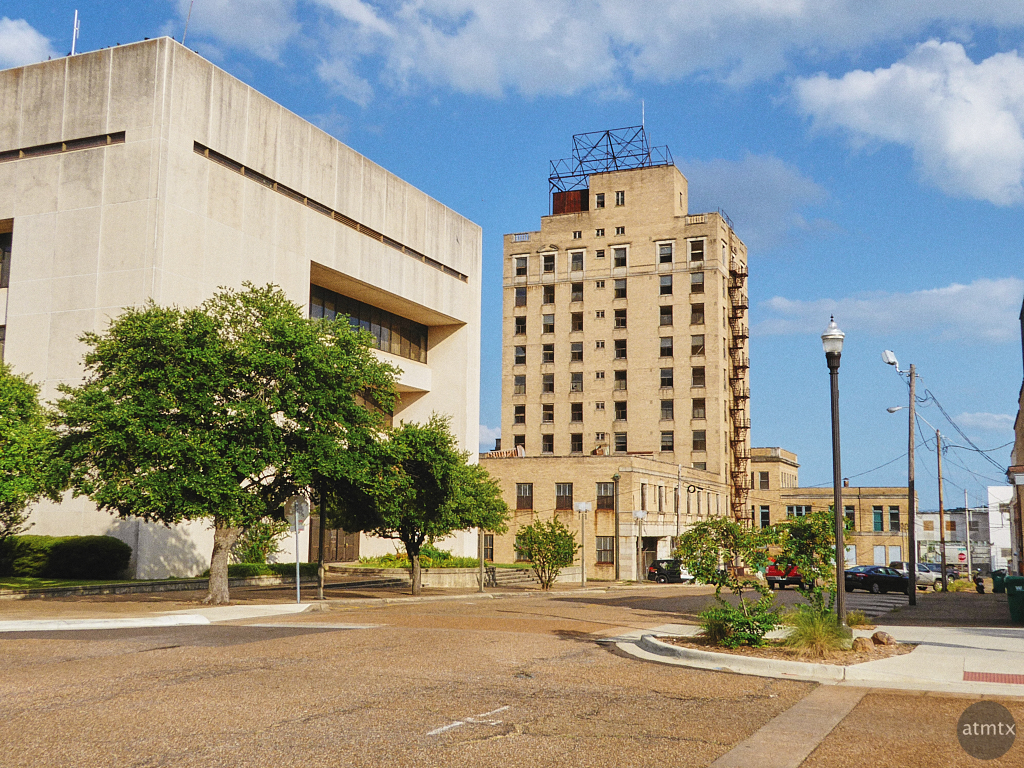 There are new buildings in the city, though they don’t have the architectural flourishes of yesteryear.

This tall building is most likely a hotel. The same one I featured in yesterday’s post. I’m assuming this was a hotel from the design of the tower as well as its proximity to Union Station, which is just across the street.

I can imagine in years past, this bustling area as trains unloaded visitors from afar, who conveniently checked into the hotel. I wonder how long ago that was. When was it when the area started to decline?

I’m assuming that this was also a hotel, located closer to the courthouse off the main road. This one looks even more impressive than the one by Union Station.

Incidentally, I was trying to simulate those old post cards you see with the faded images of long lost buildings. This photo seems to most resemble that look that I was going after. I also added a simulated grain to get that Film-ish look.

No doubt, when this hotel was new, they had optimistic post cards featuring this luxury establishment. What was their marketing pitch? Come to Texarkana and visit two states at once?

I’m fascinated by these places. Substantial downtowns that boasted a thriving economy that somehow didn’t work out. Was it because train travel declined and the Interstate travelers no longer visited?

A few years ago, I dropped into Temple, located off of Interstate 35 just an hour north of Austin. That blog post of Temple, Texas is one of my most popular posts. More than two dozen people commented. Many who live there and remember its heyday.

Perhaps, if I’m lucky, some long-term Texarkana residents will find this post. Maybe they can talk about their fair city and what it was like, a long time ago.

3 thoughts on “The Magnificent Buildings of Texarkana”