Details around the Tracks – Taylor, Texas

In yesterday’s creative framing practice, I was critical about an eyesore in Taylor, Texas. It was a bridge that looks like a giant highway overpass, right in the middle of downtown. After looking through my library of photos I shot last week, I decided to explore the topic in greater depth. Here’s a photo essay, a bit different from my usual.

Texas 95 is a major rural road running north-south, passing east of Austin. It ties together the sizable cities of Bastrop, Elgin, Taylor and Temple. The bridge I’m complaining about is part of Texas 95 and runs directly in to Main Street in Downtown Taylor. It spans a significant set of train tracks just south of the city.

While I’m not disputing its convenience, architecturally and from an urban planning perspective, it’s a disaster. The picture at the top is the view from Main Street, looking south, on the western side of the road. The eastern view is even more grim, as seen below. 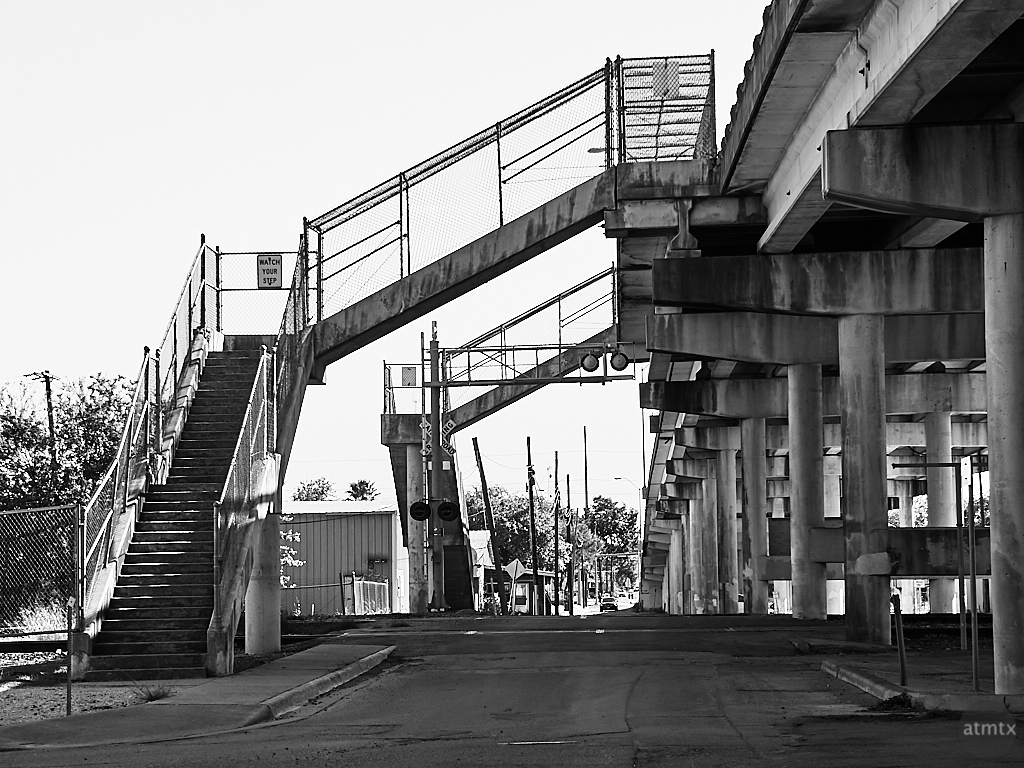 The chain link fencing is a nice touch and has all the character of a maximum security prison. While these austere black and white photos might work for industrial architecture, it’s not exactly what you want to see in your central business district.

I’m guessing, though I’m not sure, these designs are courtesy of the Texas Department of Transportation. If so, this is the same entity that maintains the concrete bridges of Interstate 35, which cuts through Austin, dividing east and west. Interstate 35 is also a major blight on downtown Austin, just on a grander scale compared to Taylor.

To be clear, this is not a criticism of the City of Taylor, rather, it’s about the short-sighted and budget efficient considerations of a state agency. And, I imagine, Texas DOT’s charter is for the tax efficient creation and maintenance of our roads, so they’re probably doing their jobs. What gets squeezed is the aesthetic and human design considerations which originally made these old cities so wonderful. 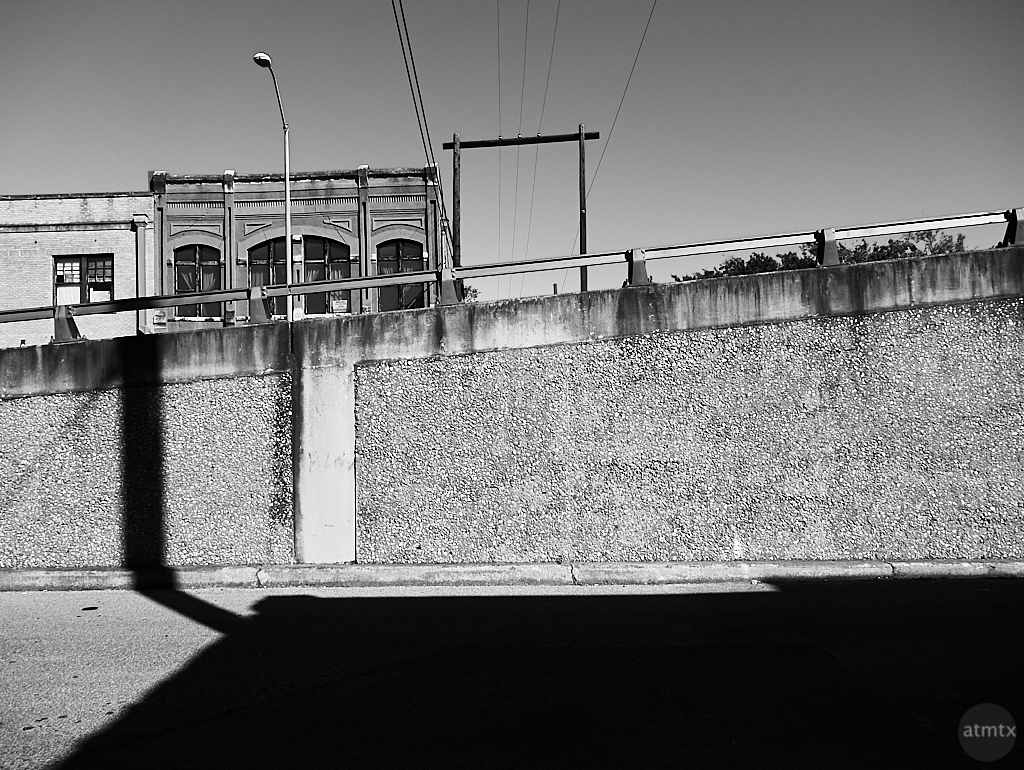 If a big honking bridge was not bad enough, it also creates a giant wall between both sides of the street. The nicely scaled buildings and a sense of place gets destroyed. 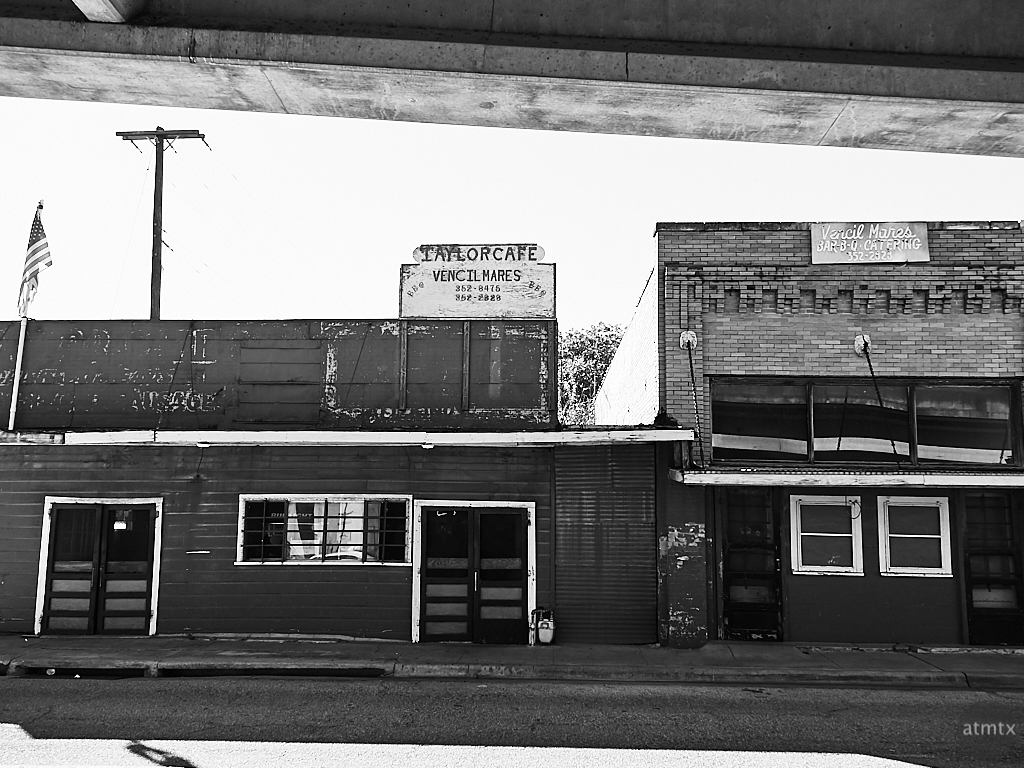 One business survives, stubbornly like a weed growing out of a crack in the pavement. Taylor Cafe is one of two noteworthy barbecue places in town. It opened back in 1948, long before the bridge was built, I’m sure. I took the these pictures from under the bridge. The second photo, with a telephoto effect, makes the cafe look like it’s under the bridge. The realty is only slightly better. There’s no denying that the bridge completely overshadows these buildings.

I took this photo from the same place as yesterday’s photo, but with more of a telephoto. This is on the opposite side of the bridge from the Taylor Cafe. None of these business seem to be alive. The buildings are in rough shape but have beautiful facades. It would nice to see these restored in the future. 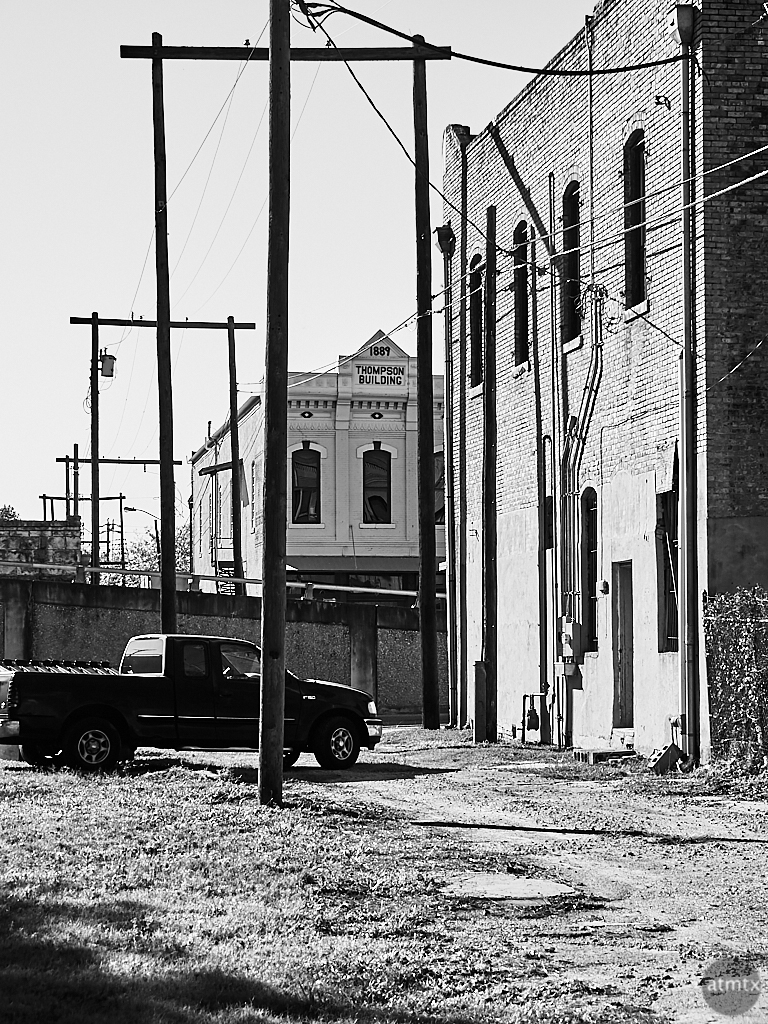 Moving south about a block, you get to see the rhythm of the street that is disrupted by the slanting wall. You can see the Thompson Building still standing tall, behind the wall, built in 1889. Many of the substantial brick building date from around that time. 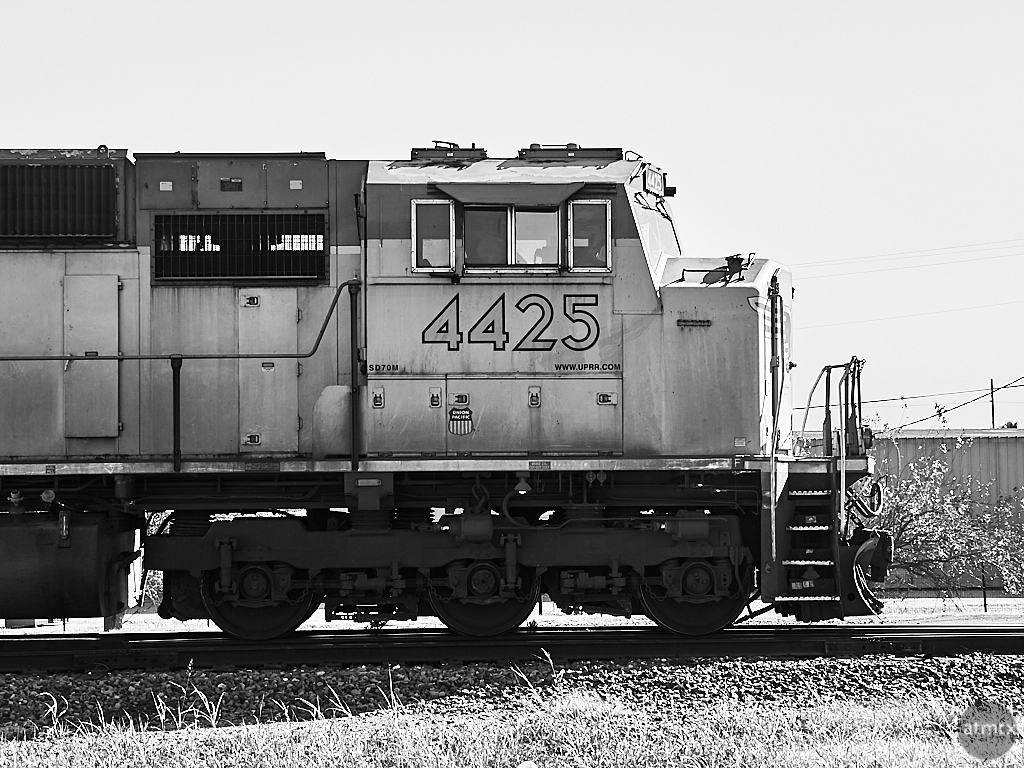 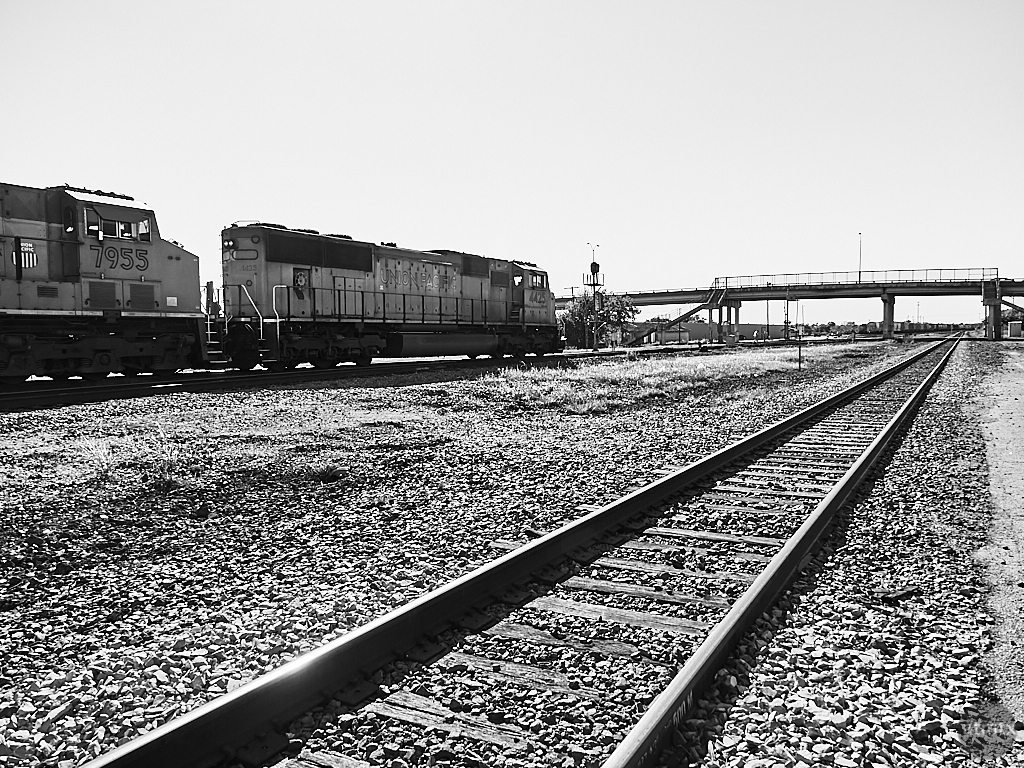 Here’s the reason for the bridge. The train. I found out, in fact, the train was responsible for building Taylor. Originally called Taylorville, named after railroad official, Edward Moses Taylor. It was part of the International-Great Northern Railroad. Taylor also became a major cotton hub.

Here’s the crossing for cars and people. Other than the Taylor Cafe and the train station, there appears to be no other active businesses in this part of town. Several blocks north, I’ve notice many new places opening up with the majority of storefronts occupied. Those places still retain the original design and the pedestrian friendly grid of buildings.

Has the bridge depressed any re-development in this area? I don’t know, but I’m sure it doesn’t help. 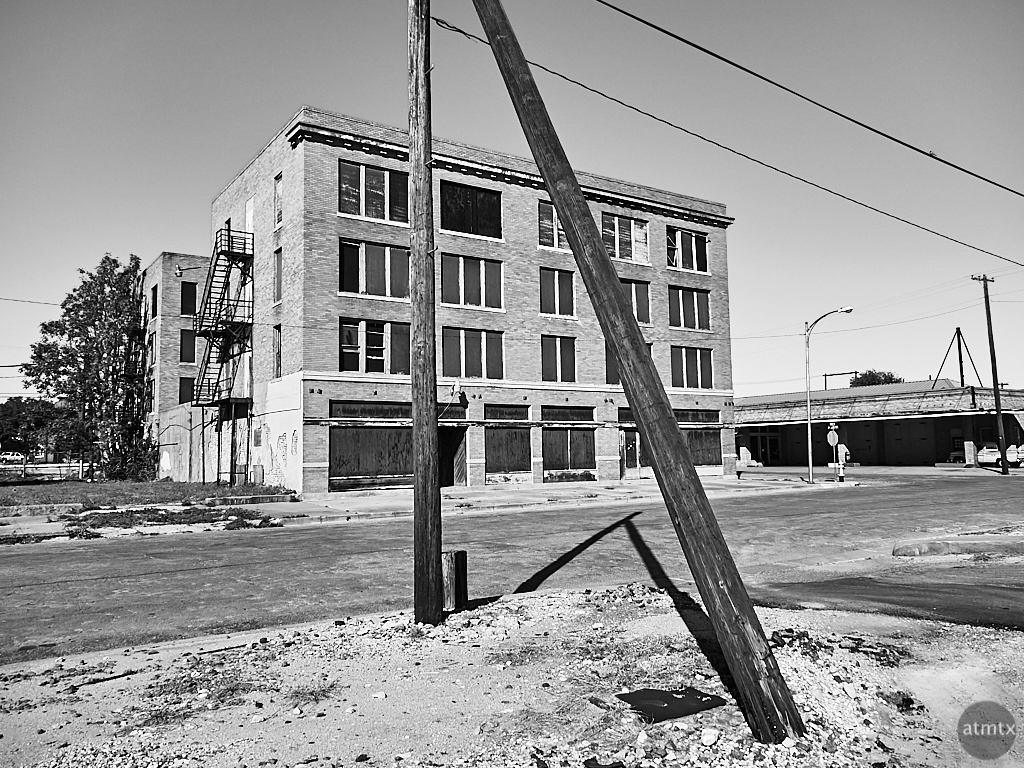 Finally, we have the boarded up remains of the Hotel Blazilmar, directly across from the train station. Built in 1917, it featured steam heat and celling fans in each of its 90 rooms. It also served as the Greyhound Bus Station. With many downtown buildings being renovated, I wonder when they can tackle the Blazilmar. It may be the centerpiece that jump starts the renewal in this part of town.

Unfortunately, even if downtown Taylor comes alive with thriving businesses, this concrete eyesore remains. I suppose its effects can be somewhat blunted with Nature Band-aids, but all of the greenery and trees can only do so much.

Someday in the future, I hope that a talented landscape and urban planner can do something in this area. Taylor’s prospects seem to be improving and I would love to see a vibrant central business district. There are too many wonderful buildings to ignore.

Note: I found a great site with details of the historic buildings of downtown. Here’s a PDF of a Historic Walking Tour.

8 thoughts on “Photo Essay: Taylor’s Eyesore and its Lingering Effects”