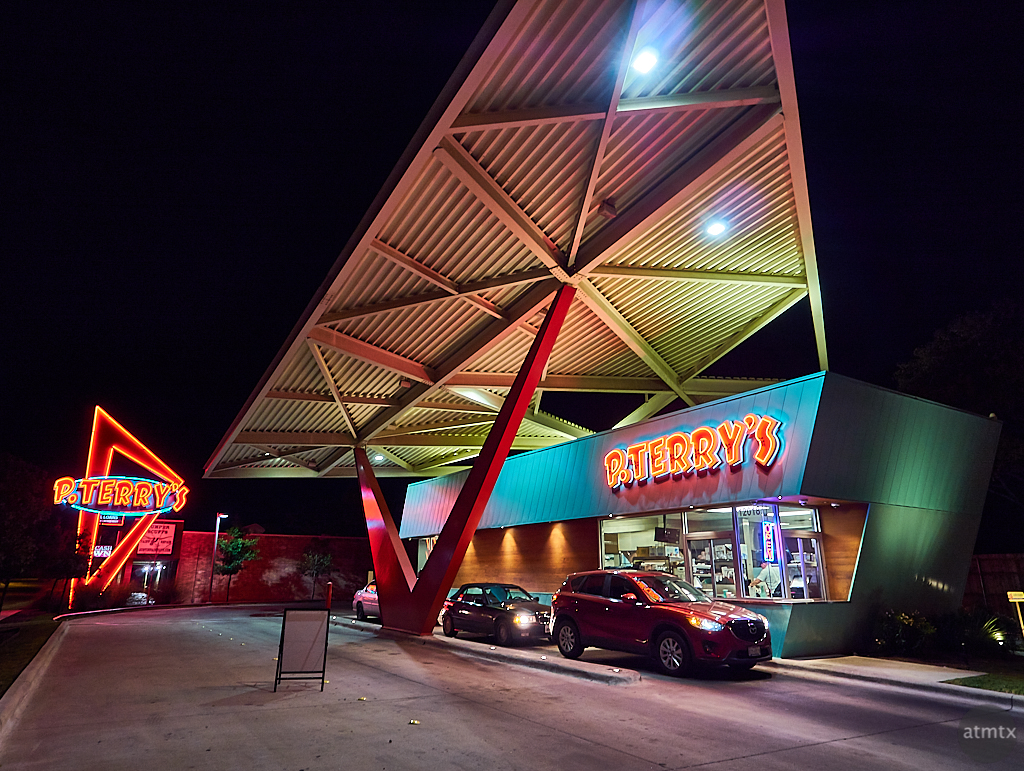 I’ve often driven by this dramatic structure and wanted to create a photo. After all, I like architecture, and this is a pretty neat looking building, especially for a glorified hamburger stand. Of course it looks dramatic at night, like a lot of things, and perhaps the only thing that can make it better is catching it during blue hour.

I was on the way home from Taylor a couple of weeks ago when my wife called. She had a hankering for a chocolate shake. P.Terry’s was relatively close and I obliged. With shake firmly in hand, I figured it was a perfect opportunity for a photo.

A big kudos to P.Terry’s for having architecturally interesting buildings. They are a local burger place that is not unlike the national In-n-Out chain, except with better architecture and options for chicken and veggie burgers — after all, this is Austin. The folks that worked there, as well as the people in line, probably though I was crazy. Why is this guy taking a picture of a burger stand? At least I didn’t use a tripod.

Recently, I’ve had some problems getting clear shots at slow shutter speeds with the Olympus PEN-F. The normally every effective in-body image stabilization (IBIS) didn’t seem to be working effectively. Was it broken? Luckily, I found out that — inexplicably — the image stabilization was turned off. In retrospect, I guess I was doing pretty good, making a decently sharp photo at 1/8 of a second at a 20mm equivalent. That’s slightly over 1 stop of extra stability without any mechanical help.

With the IBIS switched on, however, I should do a lot better. Maybe another milkshake run will afford me the opportunity for more photos. I just have to convince my wife that a shake will be perfect during blue hour.