With 18 posts on the Olympus XZ-1, we’re finally at the end of the series. I had a really successful downtown Austin photowalk from golden hour to blue hour and came away with satisfying photos. It goes to show that even with an old point and shoot, you can make some decent images under a lot of different conditions.

The daylight photos are fantastic and I really think there is something to the color. These differences probably can be mimicked in post-processing even using a CMOS sensor. But, my post-processing skills aren’t that good. And, why mimic if I can shoot the real thing. It’s too bad they don’t currently make higher resolution CCD cameras. I’m talking about a modest boost from the 10MP XZ-1, something in a 12MP to 16MP range.

The night photos aren’t bad too, especially if I can keep in under ISO 200. And, surprisingly in the city, bright signs and ambient light makes this possible. The first image of the 2nd Street Bridge is such a case. Shot at ISO 160, though I did have to drop the shutter speed to 1/8 of a second. I was able to use the image stabilization in the camera and I made a picture that I didn’t think possible. 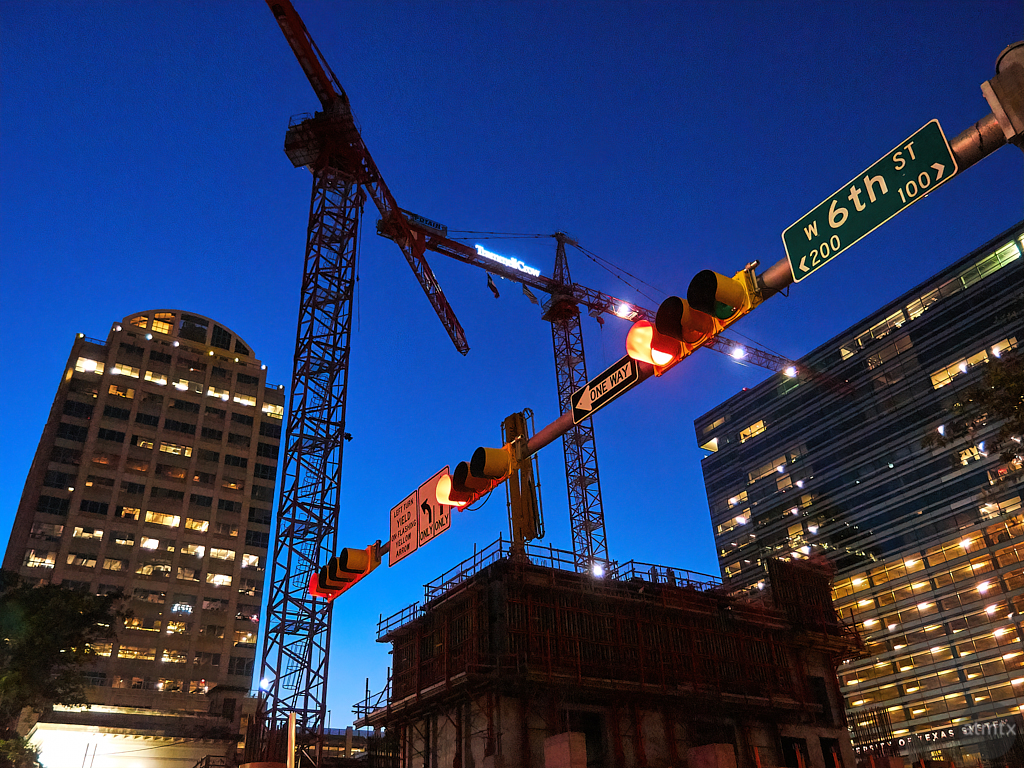 These two pictures are at ISO 500 and 320. They have fine digital grain that wasn’t entirely objectionable, especially compared to the analog grain of film. Because I didn’t need to recover shadow areas, they were usable as is, I suppose. Though to get the clean look of digital, they needed help. I ran these two through Topaz Software’s AI Clear and Sharpen filters.

So yes, I used an eight-year-old camera with a subpar high ISO CCD sensor but boosted its capabilities with the latest in Artificial Intelligence software in Post.

Finally, we have an image of the newly renovated Republic Square Park in fading blue hour. It was dark and shooting at ISO 500 and lifting shadows and brightening the image brought out some horrible noise. I applied the same Topaz Software and produced a workable image. Not spectacular but probably pretty good compared to what the typical smartphone users are used to.

If I were really serious, like urban landscape photographers can be, I suppose I could shoot this with a tripod at its base ISO. It may be goofy to have such a small camera on a tripod but it might be fun to try, just to see how good of an image I can make.

The reality is that most cameras made in the last ten years can be satisfactory for most people. I’m guilty of having a lot of cameras and I play with them for fun. But, if you are on a budget or you want to challenge yourself with some perfectly adequate but older technology, buy or use an older camera.

New cameras are getting ridiculously expensive these days and odds are, you don’t need them. You are paying a lot of money for the extra 5 to 10 percent of capability. A capability that I think most people really don’t use or need.