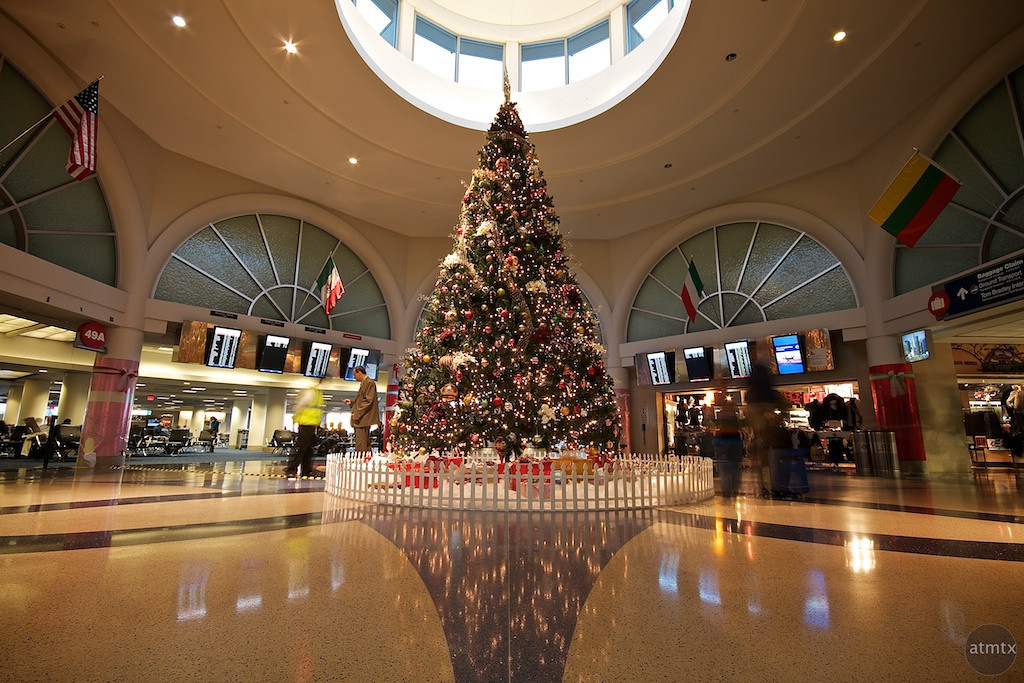 I wanted to celebrate the holiday season with not one but 3 beautiful Christmas trees. Two of the photos I took a year ago and was waiting for the perfect time to talk about them. The other one has become a tradition. While the fans of mostlyfotos have seen these images over the last few days, I thought this mini-series of Christmas trees will make for an interesting, longer post. Each photo has a back story and a set of decisions about why I used a particular technique or piece of equipment. While the photographs are linked by a common theme, their origins and motivations can be entirely different.

The first one is my favorite. I photographed it a year ago in Coronado, California at the Hotel del Coronado during a winter, family vacation to Southern California. This year, as I sit peacefully at home, with no traveling required, I get to reminisce about the story behind the photograph. As my family settled down in the hotel room in San Diego, I took the short trip over the bridge to Coronado, an upscale community on the other side of San Diego Bay. While most of my photography during this trip was to capture the family moments at Disneyland and other tourist attractions, I also brought my larger, more serious gear for some personal photography. So with my Canon 7D and tripod in tow, I found my way to the large, grand Victorian Hotel hoping to capture some holiday decorations. Mission accomplished! I shot several angles with multiple exposures, so that I could later post-process them using some HDR (High Dynamic Range) goodness. Fast forward to a couple of days ago, and after doing some HDR processing, I decided to go with a single exposure. My HDR processing has always been fairly light and I didn’t see much benefit of HDR in this image. I actually preferred using the middle exposure of my 3 exposure bracket. I like this image the most because of the environment that surrounds the tree. All of the trees in this post are beautiful but this one has the advantage of having some old world, richly ornate wood that surrounds the centerpiece. I love the glow of the lights reflecting off the wood work and the bit of shadows that add mystery to the scene. I think typical HDRs would over-brighten the scene, losing the shadows. The mystery and romance of the image would be lost. When I post-process the image to maintain the shadows, the resulting HDR didn’t look very different from a straight, single exposure. More and more, as I continue my journey in photography, I realize the power of shadows.

Image two was taken at the Los Angeles International Airport (LAX) in the American Airlines wing. I took it on the way back from the same family vacation I talked about previously. I had some time to kill before our flight back to Austin, nothing better than some photography, right? Unlike the relatively quiet, dark and old-world feel of the first image, this one feels modern, commercial and busy. I feel hesitant to break open a tripod in a busy place like an airport but I did my best to stay away from the main isles of traffic. Architecture again plays a major role in this tree image. This time I wanted a symmetrical composition between the archways. I placed the tripod low to the ground to capture the reflection off the floor and show the circular skylight above. I also purposely positioned the camera so the black floor pattern would be in the center of the frame and direct the eye to the tree. I used my Canon 7D and with the same super-wide Sigma 10-20mm lens that I used for my Coronado shot. In fact, this Sigma now stays on the camera most of the time. It is my go to lens for wide-angle interior and urban landscapes. I would have preferred to have fewer people in the frame, but this just was not possible. After shooting several long exposures, this one seemed the best. Unlike the first image, I did not plan a HDR for my LAX Christmas tree, just a long exposure to blur out the traffic.

The last image has become sort of a tradition over the last several years. This is the third year in the row that I shot the Christmas Tree at the Driskill Hotel. The Driskill is the grand old hotel in Austin. Because of the positioning of the pillars, I inevitably shoot the tree from the same position every year. You can see the previous two photos in the post I did last year called The Driskill Christmas Tree, One Year Apart. The tree of course looks different from year to year. One year it seems to be skinny. The next year it seems to put on more weight. This year seems to be a bit slender than last year’s. The image processing and composition also changes somewhat from year to year. I used my Sony NEX-5 again, the same as last year, with my 16mm f2.8. It was shot with a small tripod, very close to the floor, in an attempt to capture the sparkling floor reflections. This year’s image is a bit brighter and since I didn’t use HDR I lost a bit of detail from the stained glass. The white balance was tweaked to be a bit less orange than the 2010 version but still retain the warmth. The Driskill is a magnificent hotel but the darkness and shadows of the Coronado hotel lobby really brings out the tree for me. I would certainly love to take yearly photographs at the Hotel del Coronado but alas I think time and budge will make this more challenging. The quick trip to downtown Austin is certainly more accessible and I maybe taking a visit to the Driskill again next year.

Thank you to the readers of this blog for your visit. I hope you all have a Merry Christmas and happy and safe holiday season.

5 thoughts on “Three Christmas Trees for the Holiday Season”