I recently posted some Halloween portraits from 6th street that people seem to like. I could have gone with my conventional available light images that I usually take down on 6th street — the Canon 6D at high ISO does a surprisingly good job in low light. Available light shots, however, have a moody but soft look to them. Great for shallow depth of field street photography and romantic wedding photos, but I wanted to do something different. I wanted more of a crisp, dynamic look, different from my regular stuff.

I’ve included several new portraits on this post and you can click here to see the rest of them. As promised, here is the way I created these Halloween portraits.

The LumiPro LP180 is a popular full featured flash used in the Strobist community that often use manually set flash exposures.

Cactus V5 Trigger. Attach one trigger to the camera’s hot shoe and the other one to the bottom of the flash. A simple way to get a wireless triggering system.

Panasonic Lumix 14mm f2.5. This is one of my favorite micro 4/3 lenses. It is also one of the smallest and lightest.

Direct flash gets a bad rap but it can be neat when done in the right way. And you don’t necessary need a soft box or umbrella either, especially if you want that crisp look. The trick is to get the light source off axis, meaning you shouldn’t have the flash on top of your camera. This tends to flatten out features and you lose that three-dimensional look.

Your primary light source is no longer going to be the flash on your camera. There are several ways to do off camera flash. First, you need to use a camera with a hot shoe. You also need an external flash that can be triggered wirelessly or connected via a sync cord. Some camera companies have wireless flash triggering features built into their nicer cameras and flashes. You can certainly use this to get TTL metering which dynamically adjusts to the light conditions. These systems are proprietary so a Nikon wireless system will not work with Canon flashes, for example.

I went for the cheaper and more primitive manual route. While you don’t get the fancy TTL metering, manual flash exposure works great when the environment does not change. Since I was shooting at night, this worked great. The benefits of manual flash is that I can use inexpensive flashes and triggers and arguably get more consistent exposures if you do it right. It’s also manufacturer independent, so I can use the same triggering system on any camera that has a hot shoe.

I used the same inexpensive but reliable Cactus V5 triggers that I used for the Haunted House Photo Booth. My flash is a no frills house brand called Quantaray that was sold by the now out of business Ritz Camera. Any flash capable of manual mode should do, even older models. A nice unit that has is popular with the Strobist community is the LumoPro LP180. I have not used this model but it has even more features than my flash. I dialed down my flash to 1/64 power. After a couple of minutes of testing, I settled on ISO 250, 1/160 second shutter and around f3.2 to f4 in manual exposure mode. I also preset manual focus to several feet out. I held the flash in my left hand and shot with my right. If my camera has located in the center of the clock, the flash was held over my head at around the 10 o’clock position and angled towards my subjects which were about 3 – 5 feet away.

Camera wise, I used the Olympus E-PM2. I thought about using the Canon 6D but there were several advantages to using the E-PM2. First, I wanted a wide-angle view since I knew I would need to include groups of people. The only wide-angle I had on the Canon was the 24-105mm zoom, which combined with the 6D will be heavy to hold one handed. On the Olympus, I used my Lumix 14mm f2.5 (28mm equivalent) pancake lens which made for an incredibility light-weight setup, perfect for one handed operation all night. I could have also used the standard 14-42mm Olympus kit lens, which isn’t much heavier.

At ISO 250, image quality was not a factor. But the smaller sensor on the Olympus has an advantage since it has more depth of field. I could shoot at a f3.2 to f4 range and get the entire group in focus. On the 6D, I would need to go at least to f8. Finally, I also was wary of bringing expensive equipment. I heard that 6th Street on Halloween was crowded and a bit crazy. I felt more comfortable using smaller and less expensive gear.

A couple of people commented how nicely the flash had blacked out the background. Well, in fact, shooting in this way does have the advantage of dropping out the ambient light. But it doesn’t always work perfectly and I resorted to a bit of artistic trickery to get the effect that I wanted. Yes, I did some post processing to mask my subjects from the background. Before I go into that, let me explain the shooting environment.

You have to understand that 6th Street was very crowded with wall to wall people. If I were able to direct people to an open area, then this technique would have worked much better, in camera. Or conversely, If I had set up a dark background, that would have been great too. Instead, I asked people for portraits as I walked down the street. I spent perhaps 10 -15 seconds per person and I didn’t have the luxury or desire to move and optimally position my subjects.

If lucky, I got a break from the crowds and I got a fairly clean shot like the vampire couple. However, most of the time, it was more like the situation below that. Masking and adding a black background was relatively easy — a different color would be a more difficult. I think that the post processing adds a level of simplicity that give sort of a studio feel to these street portraits.

There are many ways to mask away the background but I wanted to experiment with some new software. Topaz Labs makes ReMask which I’ve always wanted to test. It worked great. With some practice, I was able to do some fairly complex masking, certainly better than what I can do with Photoshop. Take a look at the example below. Masking hair can get tricky and her head dress made it even more challenging. You can tell ReMask did a great job with the subtle details.

How easy is ReMask? Well here is a Youtube video of how it works. I never even read the manual. All I did was look at this video and practiced a bit.

So there you have it. This is how I did those Halloween portraits. It was nice to break out of the usual mold and do something different. Perhaps I’ll use the technique again. Thanks for stopping by, I hope you found this informative and interesting. 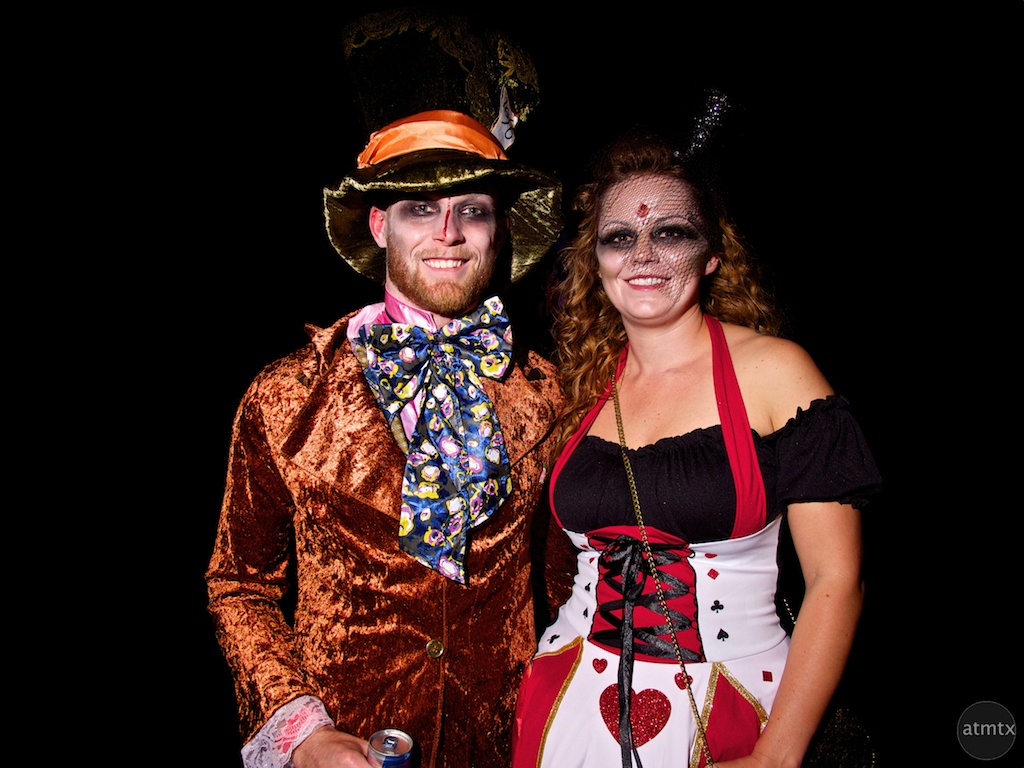 12 thoughts on “How I created simple Halloween street portraits”