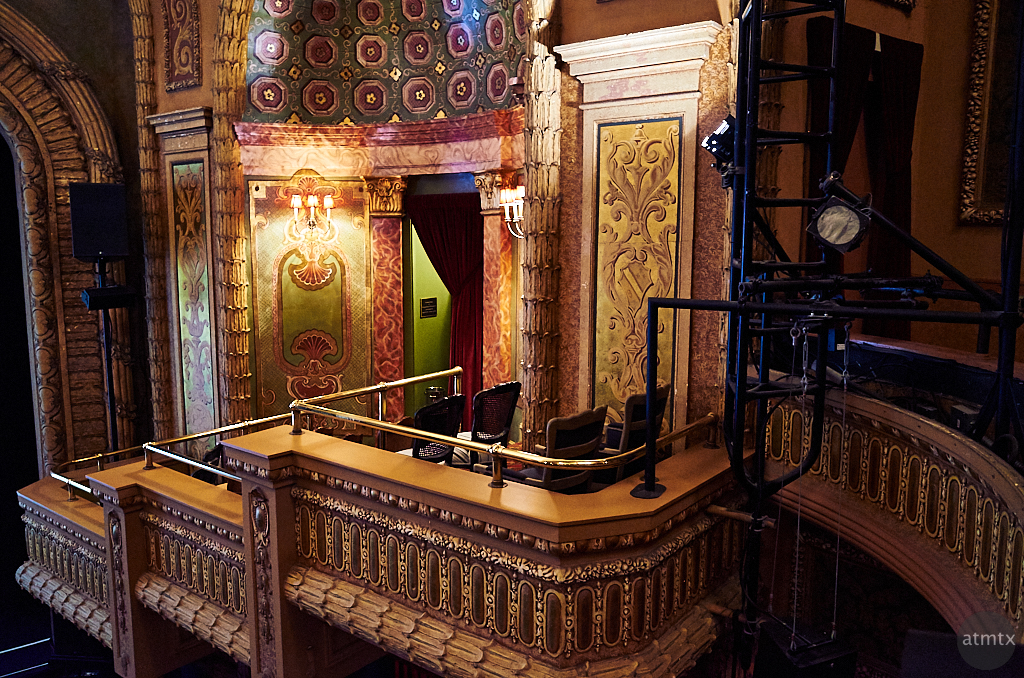 I shoot the exterior of The Paramount Theater often, but I could hardly remember that last time I was inside. I think 20+ years ago, if I had to guess. Well, I was there two weeks ago with my two boys to see a fantastic screening of The Godfather. What’s not to like. One of the best movies ever made, in a grand theater space unlike anything modern. It turned our little downtown excursion into a noteworthy event.

The kids were awed by the space too. This is no cineplex at a strip mall. The old aspect ratio (2 x 3?) of the movie fit the not-quite-so-wide screen, perfectly, complete with working red curtains. I’ve seen The Godfather several times but never in a theater. I was eight when it hit the silver screen.

Beyond the brilliance of the movie, I noticed the color and grain — stuff that, as a photographer occasionally using film, I better understand. I’m sure this was a digitally remastered copy projected digitally, but the feel of the movie differed from the modern ones. There’s a texture and a patina that matched perfectly with the old-world venue. 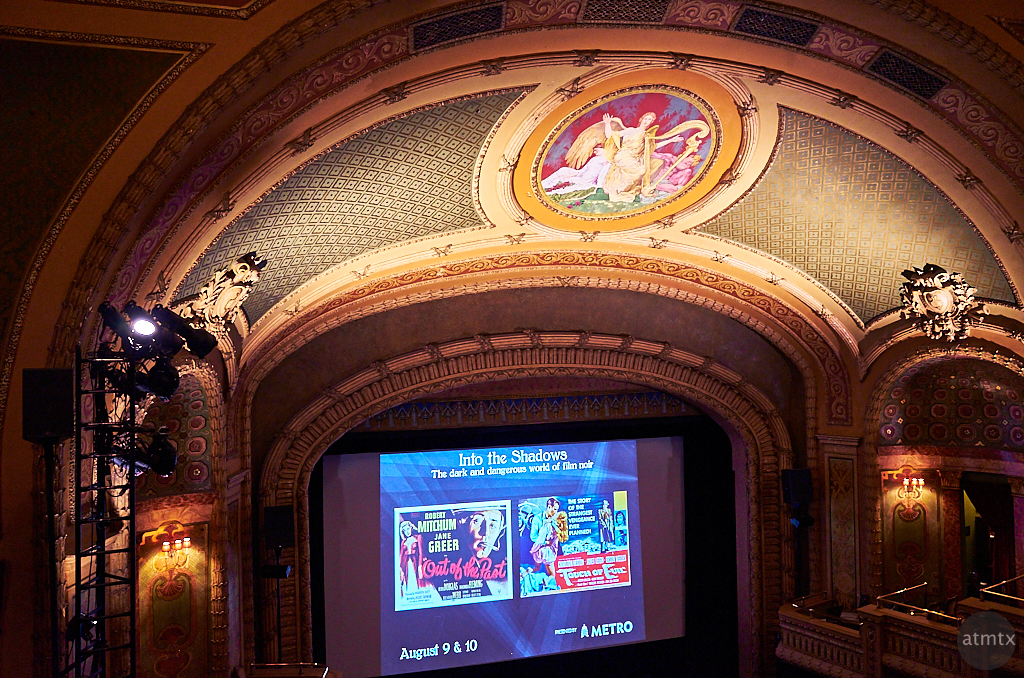 The Paramount was built in 1915, before radio, television, computers, internet, Twitter, Facebook, YouTube and Netflix. I explained to the kids that, in the olden days, this was the major form of entertainment — to see a movie downtown in a grand place.

I grew up at the tail end of this, in the 70s, with the remnants of the once grand theaters. My local area in New York had two large theaters before they got chopped up into mini-plexes. The RKO Theater played the original Star Wars for over a year, on a single screen. I still remember the simulated blue hour sky, with stars, surrounded by an ornate Spanish style village, decorating the theater’s periphery. 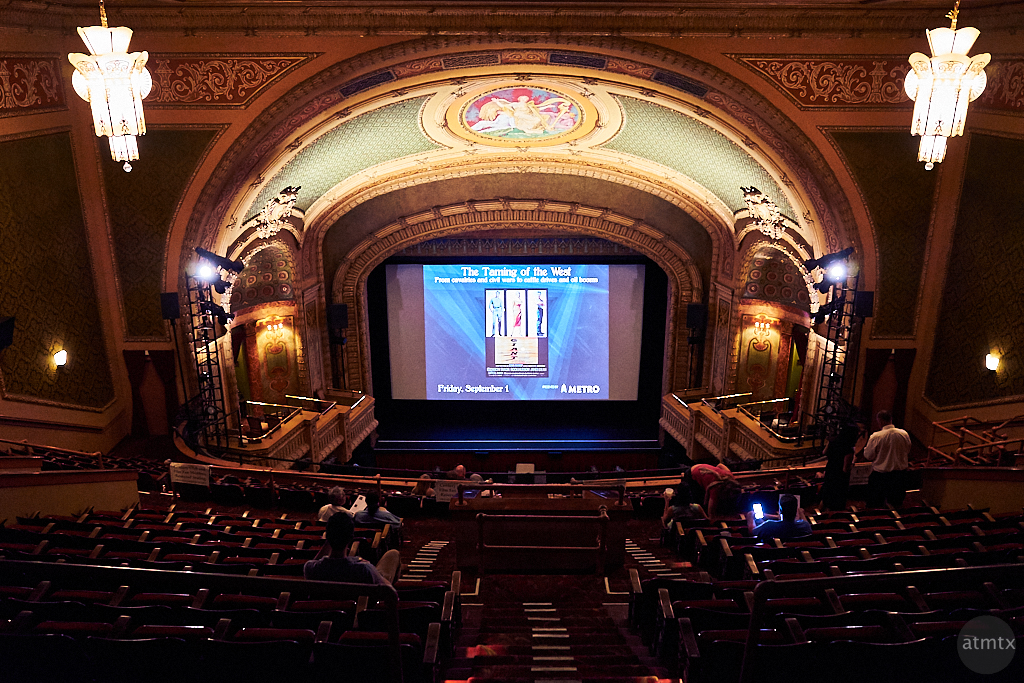 The Paramount in Austin is a deep theater. I went to the back of the balcony to get this vantage point. The screen doesn’t look particularly big and this sort of reminds me of an old-fashioned television set/furniture with ornamental wood carvings surrounding the modest screen. Luckily we came early and sat in an ideal spot about 7 rows back on the first floor. 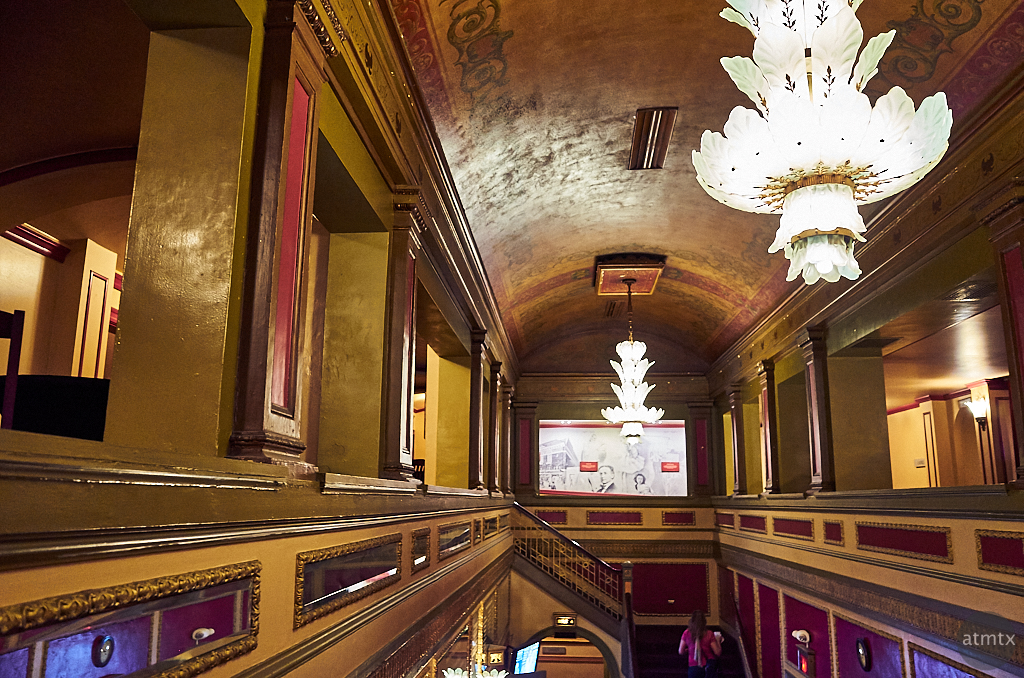 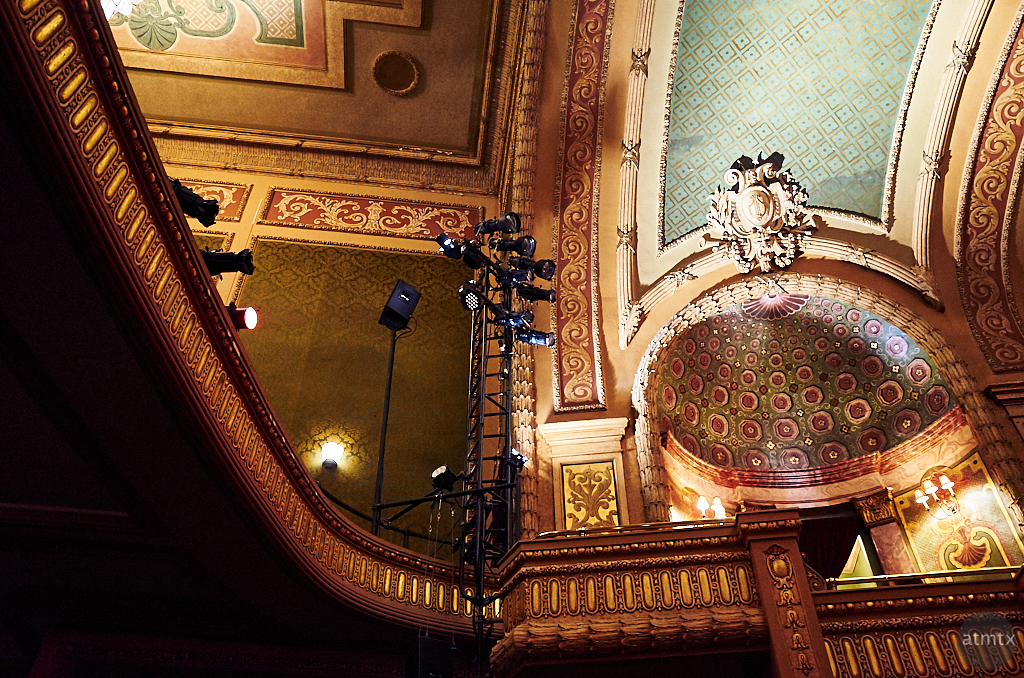 I took some snaps around the theater, including the second floor, above the lobby. I wasn’t sure about the photography policy so I used my less conspicuous Ricoh GR. The Ricoh looks like a chunky point and shoot, with a larger APS-C sensor, and more capable.

Forgive me for my rant on the GR, but I really do have a love / hate relationship with it. It has some wonderful qualities and an extremely sharp lens but with some glaring weaknesses. I don’t like the color but thankfully my new Capture One software allows more sophisticated controls to better correct. Here, I was going for a rich film like color and applied a film-ish simulation.

Other GR weaknesses? With a dim interior, the camera struggled to focus. Often the focus was also incorrect, rendering non-sharp images. Despite the large APS-C sensor, the low light performance is not very good, at least by today’s standards. The JPEG conversions are also really poor. Fortunately, I always shoot RAW + JPEG with this camera. I managed several decent photos out of the many I shot. At least they’re better than what a smartphone can do.

As you can probably guess, I much prefer using my Olympus cameras. Superior focusing, better low-light performance and a killer image stabilization to create even higher quality images. They are, however, considerably larger. Perhaps I can go back with the Olympus, someday. I would love to shoot it with a super wide-angle to really show off the dramatic space.

4 thoughts on “The Magnificent Paramount Theater”